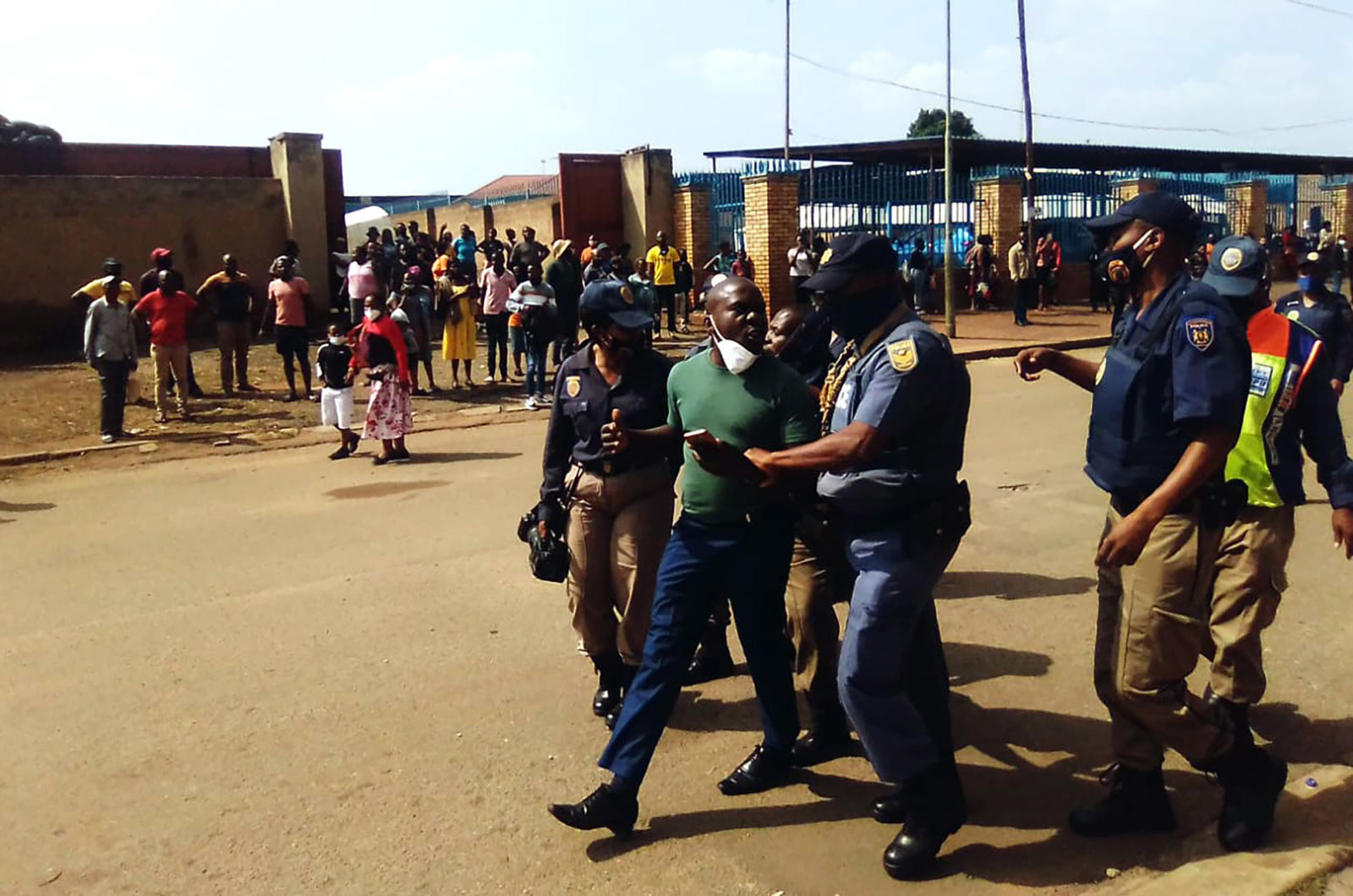 A leader of the Unity Fellowship Church led by Pastor Mpfariseni Mukhuba is led away by police. Police were responding to complaints about noise and the breaching of the Disaster Management Act. (Photo: Bheki Simelane)

Two police officers and two people attending a church service were injured during a confrontation in Midway, Soweto, on Sunday. Police were responding to complaints of noise and violations of Covid-19 regulations when violence broke out.

Police officers responded to a noise complaint on Sunday, leading to a clash with congregants from the United Fellowship Church in Soweto, according to a statement by the Johannesburg Metro Police Department (JMPD).

When Daily Maverick arrived at the church, hundreds of church members were singing and hurling insults at police and government officials.

“On their arrival, the officers were surrounded by a group of aggressive male churchgoers who thumped onto the JMPD patrol vehicles. Officers used pepper fog to disperse the group and called for backup,” a JMPD statement said.

Church members had gathered in their hundreds in contravention of the Disaster Management Act. At the time, regulations prohibited gatherings of more than 50 people. The event took place hours before President Cyril Ramaphosa addressed the nation and moved to lockdown Level 1.

“The incident occurred at approximately 1pm. A female JMPD superintendent, one female inspector and five officers attended a noise complaint at a church in Midway, Soweto,” the JMPD said.

The church is run by Pastor Mpfariseni Mukhuba, who is well known in Soweto and has been operating in the area for years. Mukhuba is held in high esteem by her followers, but not her rivals. Her face is easily recognisable on church vehicles.

Several members of the church were arrested. A pastor was reportedly among them. They were charged with contravention of the Disaster Management Act and for public violence, assault and malicious damage to property. About 2,000 people attended the church service.

Members of both the JMPD and the South African Police Service (SAPS) attended to the complaint. Two JMPD officers told Daily Maverick this was not the first complaint about the church.

“I have never been insulted in this way my whole life… certainly not by people who claim to love the Lord,” said one JMPD female officer.

A female congregant screamed: “We will defend our church from this demonic government and police. This is the work of the devil.”

“The church is under attack from this government throughout the country. There is an attempt to get the Lord’s people,” said another woman.

Asked whether they were contravening the country’s disaster regulations, church members responded with insults. One man said they were doing what God wanted and that he saw nothing wrong with the huge gathering.

The un-churchlike insults and expletives were hurled around in the presence of young children.

Midway resident Simon Chauke said the church was a nuisance. “I fail to understand why church members would want to behave so wildly. They are setting a bad example for our children. They should be ashamed to call themselves Christians. Such hooligans.”

Another fuming resident blamed the government for the mushrooming of “dodgy” churches. “It’s all about the money. That’s all these churches are about,” said Mlungisi Hadebe.

He added, “The government is too soft on these churches. That is why the likes of [Shepherd] Bushiri are making a mockery of our country and laws. This should come to an end. We will take the law into our own hands if things stay as they are… such churches are setting a bad example for our children.”

Self-styled prophet Shepherd Bushiri and his wife Mary fled the country in late 2020 before their trial on charges of theft and money laundering. The Bushiris were out on R200,000 bail when they absconded.

The country has seen a rise in churches whose leaders’ actions have been called into question. At some “services”, people are sprayed with Doom and fed live snakes, rodents and grass in the name of the “Holy Spirit”.

Meanwhile, residents in the Midway area were conflicted as some attend the church while others call for its closure. The United Fellowship Church commands a huge following, as does another nearby church owned by controversial televangelist Angel Bazooka.

When Daily Maverick returned to the church on Monday, two JMPD vehicles were parked near the gate. Small groups of people gathered outside while security guards maintained a presence. DM