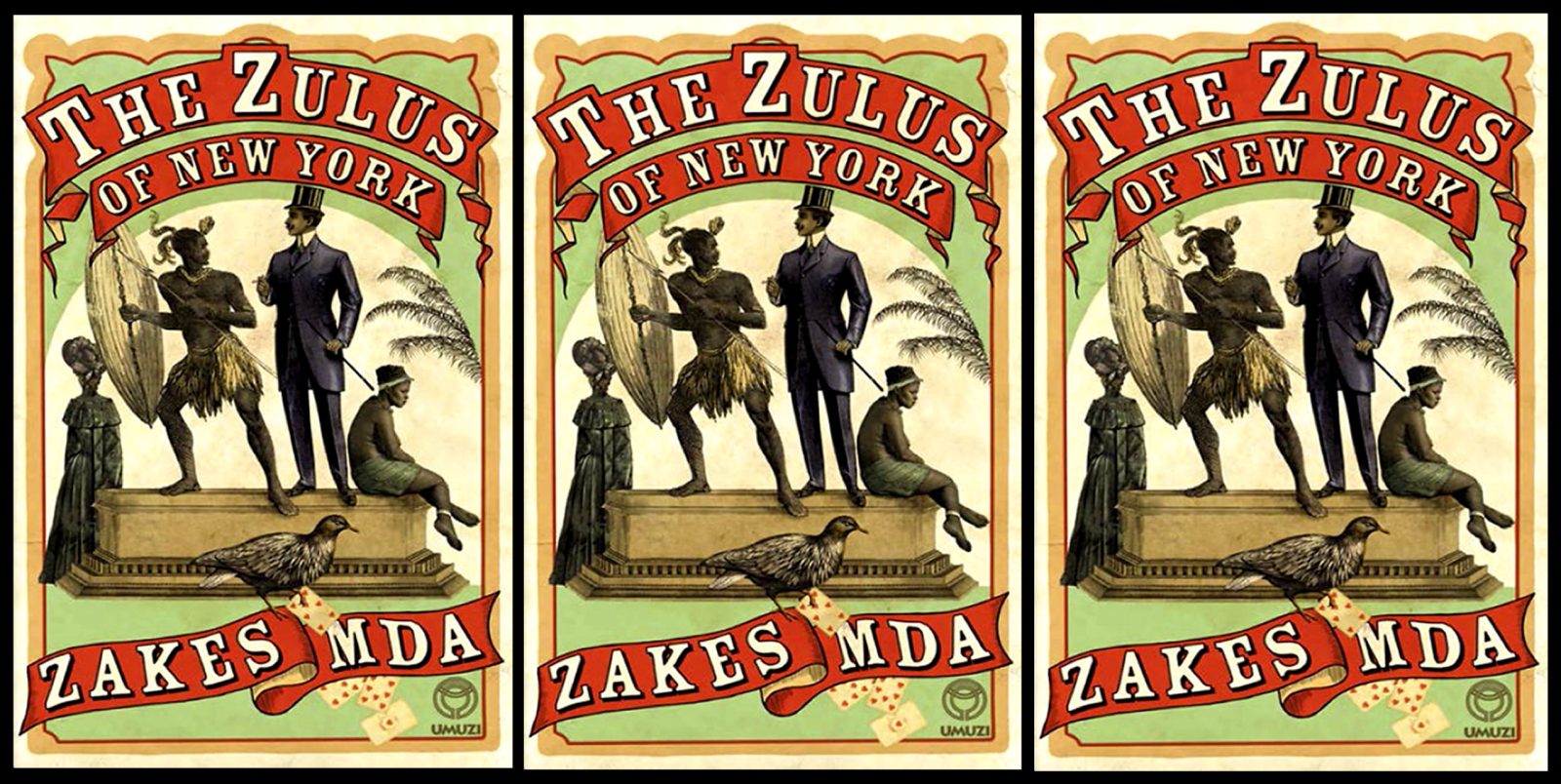 Locked down, locked in, many of us have had time to read more books than ever before. Readers, passionate about their own favourite books, are curious to know what writers have been reading during this bleak and lonely period? What was already on their shelves, what did they borrow, buy or read on-line? In this series, Reading in the Present Tense, established as well as younger writers and other creative artists will reflect on a text that moved them, intellectually engaged them, frightened them or made them laugh. Our reviewer today is Neo Muyanga who considers The Zulus of New York by Zakes Mda.

One of the first memories I have of feeling viscerally annoyed by racist bigotry during my time in Italy was when I found out the term Zulu was popularly held to mean “uncivilised” in quotidian Italian parlance. I had arrived on a scholarship to study at the United World College of the Adriatic. This is where I first encountered and learnt to sing baroque madrigals. Upon arrival, one of my first acquisitions was a copy of Dizionario Garzanti Della Lingua Italiana. Written there, in stark black-and-white, on the final page of that tome was the entry: “Zulu, agg. persona rozza e ignorante” (“a rough and ignorant person”).

Mind you, this was the Italy of the 1990s when wanton Mafia killings of court justices, state witnesses and crime reporters were rife; this was a country where government corruption scandals and political brinkmanship were so routine as to make the recent withdrawal by former prime minister Matteo Renzi’s faction from the ruling coalition (a move that put the legitimacy of the national government at risk) seem like just another walk in a well-trod park.

An ongoing personal struggle I had as a student in those days arose during my casual conversations with the old bocciofila (bocce)-playing seniors I came to regard as my “street family”. I was often at pains to prove the hollowness of my co-players’ racial prejudices and to develop a sense of my own worthiness in the village sport as a newly arrived denizen (while I learnt all my formal language skills during school, all of my “uncivilised” street Italian I imbibed from these old poets of profanity).

Mpiyezintombi Mkhize – the protagonist in Zakes Mda’s The Zulus of New York – is embroiled in something of a similar struggle to prove his worth as a true and honourable Zulu during his life as a disgraced exile-in-hiding in 1880s New York City. Mpi, as he was formerly known to his fellow amabutho, had once been a respected and loyal warrior in King Cetshwayo kaMpande’s army. But he’d suddenly had to flee his homeland after the King uncovered his illicit love affair with one of the King’s girls of isigodlo (young women who’d been placed in the King’s care for rearing and possible later marriage either to the King himself or to one of his favoured nobles).

Mpi knew King Cetshwayo would be furious. Fearing that royal court agents would soon be dispatched to capture him, Mpi resolved to run as far away from home as possible. ‘The arm of Cetshwayo was so long,” writes Mda, “that it could reach to the end of the earth.” Mpi, therefore, had to run very far indeed to stay alive.

Mpi’s exile away not only from home but also from his tradition and parts of his selfhood become cemented as he reluctantly and gradually stops marking the way the “lazy tongues of the English” invariably mispronounce his Zulu name. The author narrates how Mpi “was to accept many other things after that, at first grudgingly, but by and by they would become part of who he was”.

After Mpi escaped KwaZulu he headed for the city of Cape Town where, as part of his daily hustle for survival, he transformed himself into a semi-literate dock labourer. At this time he came to learn about the recent defeat of the army of Victoria (the “Great White Queen from across the seas”) by amabutho of Cetshwayo (his former comrades) during the famous Battle of Isandlwana. Mpi read all about it in the daily Cape newspapers.

While in Cape Town, Mpi also began to hear about the Great Farini – an ethnographic exhibition impresario who hailed from Canada and who was said to be in Cape Town on a scouting trip for new talent to include in what some no doubt regarded as his “freak shows” hosted in London. Circus-inspired shows of exotic shock-and-horror such as those popularised by PT Barnum and others were all the rage in parts of the West during the 19th century. Farini’s performances featured “displays of human and non-human curiosities”, a “two-headed Nightingale” and “African-American conjoined twins imported from North Carolina who sang in two-part harmony and danced an awkward jig”, among other highlights.

Farini managed to persuade Mpi to join his circus displays, for which he’d already “acquired” a motley crew of other “non-Zulu” men (the impresario pragmatically hired whomever was willing to role-play). These men would go on stage pretending to be King Cetshwayo’s amabutho. They would re-enact the Battle of Isandlwana before a crowd of paying pundits in whatever world capital they happened to be playing. Audiences were invited to see Farini’s “ferocious Zulus”, men who had recently “killed 800 of the Empire’s bravest soldiers”.

Farini was highly impressed with the authenticity of Mpi’s warrior routine as he seemed to know all the blood-curdling war songs and dances of the Zulus. As a result, Mpi was put in charge of teaching the other recruits “how to be Zulus” during the long sea journey from Cape Town to the docks of Liverpool. Farini insisted that the Zulu dances had to look chaotic because “you cannot have beautiful dances, you are savages; otherwise you’ll alienate the audiences”. The new troupe performed in London, thereafter invitations came in for them to take the show across the Atlantic Ocean to the shores of the US.

Tensions over race and belonging hold sway throughout the book and they surface particularly strongly in the life of Mpi. He struggles to retain what he sees as authenticity in the performance of the Zulus while sustaining critical jibes from his skits partner, Slaw, who, although of Polish descent, believes he can perform the role of a ferocious Zulu better. Mpi also struggles to maintain his relationship with Aoife, an Irish performer with whom he’d fathered a mixed-blood son, Mavo.  Mavo’s relationship with Mpi turns tumultuous as the boy approaches puberty and judges his father for his scant success in pursuing his life as a performance Zulu in New York. Mpi also happens upon what he believes to be true but doomed love with another woman, Acol. She is a Dinka Princess and a budding photographer who, Mpi discovers, lives as the real-life slave of a wealthy New Yorker in the city’s elite midtown neighbourhood.

In The Zulus of New York, Mda very skilfully weaves a story that puts some of the barbarism of the colonial period under the spotlight. The tale reminds readers just how early it was in the development of practices of global capital that industry became a firm and fast bedfellow of spheres as diverse as anthropology, ethnography, history and entertainment. Mda brings cosmologies of power, money and violence into vivid collision with contemporary concerns about identity and intersectionality.

Neo Muyanga is a composer, sound artist and librettist. His work traverses new opera, jazz improv and African song idioms. In 1996, he formed the acoustic guitar duo, Blk Sonshine, with Masauko Chipembere. He has released nine records including most recently, Toro tse Sekete (2015); and MAKEdbA (2019). In 2008, he and Chimurenga Chronic publisher Ntone Edjabe co-founded the Pan African Space Station – a platform for cutting-edge Pan African music and sound art on the internet. His stage productions include The Heart of Redness (2015), an opera adaptation of Zakes Mda’s novel, directed by Magnet Theatre’s Mark Fleishman and produced by Cape Town Opera. He has published numerous research papers on the theme of “Voice as Protest”.  An alumnus of the Berliner Künstlerprogramm des DAAD, Neo’s “disrupted” reinterpretation of the civil rights anthem, Amazing Grace, as A Maze in Grace is a multimedia installation developed in 2020/21 for the São Paolo Biennale of Art in collaboration with The Liverpool Biennale of Contemporary Art. He is currently working on a score for a new work about Kwaku Anansi, the Ashanti trickster god, for the Dutch National Opera.