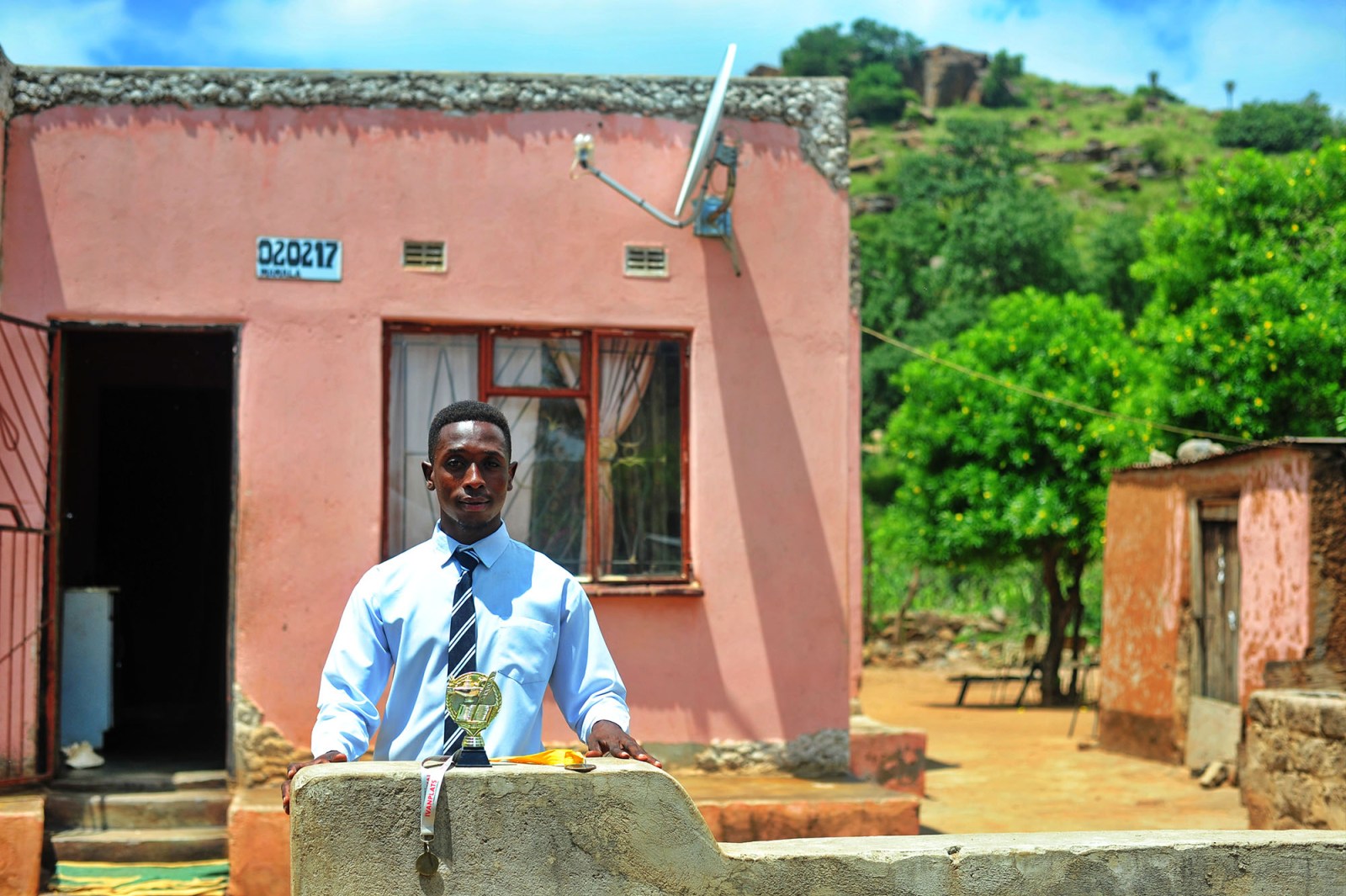 Kamogelo Brandon Senoa comes from a single-parent family. His mother is unemployed and supports the family on the little income she makes selling cooldrinks and snacks. (Photo: Lucas Ledwaba / Mukurukuru Media)

Learners who faced the hardships of under-resourced schools, coupled with the challenges brought by Covid-19 and the subsequent lockdowns, proved that they could rise to the occasion in the face of adversity – and succeed.

When his village experienced load shedding in the middle of the night, matric pupil Kamogelo Brandon Senoa would turn on his cellphone torch so he could continue studying.

This week the 18-year-old from Ga-Mamaala reaped the rewards of the long hours spent swotting in the backyard shack that doubles as his study and bedroom.

The pupil from Mmantutule Senior Secondary school in Mesopotamia, a village in the Waterberg district of Limpopo, passed matric with three distinctions: mathematics, life orientation and life sciences.

The Waterberg region, one of the remotest areas of the province, emerged as the best-performing part of the province in the 2020 matric results, with an average of 77.5%. It was followed by Vhembe East with 77.1% and Vhembe West at 72.7%. The province itself was placed seventh, with a 68.2% average, just above Eastern Cape and Northern Cape.

Brandon’s home, a two-bedroom brick house, a zinc shack that serves as a kitchen and another wooden shack where he sleeps  – and where he spent hours studying – is located at the bottom of a picturesque koppie.

It is one of the sub-villages under the Mapela traditional authority about 40km west of the bushveld town of Mokopane, which is home to the biggest open-cast platinum mine in the world – Mogalakwena.

The mine employs some of the residents from the district – but those who can’t find work there leave for Gauteng to search for better opportunities.

The homesteads are located on big plots around which residents grow crops such as maize and potatoes for their sustenance and keep goats and cattle in kraals. The grey mine dumps, forming an ugly arch on the green landscape, are visible to the east of the village.

Brandon’s home, like many others in the village, does not have running water. The family buys their supply from independent waterpreneurs who have drilled boreholes at their homesteads and then in turn sell the precious resource.

The village roads turn soggy during the rainy season. They are connected to the electricity grid on a prepaid system. The Mogalakwena local municipality, under which the village falls, has been cited in reports by the Auditor-General as among the worst in the country.

Brandon’s mother, Ivy Senoa, is unemployed. She sells cooldrinks and snacks from home to make a little money for basic necessities. Brandon was a beneficiary of the school’s nutrition programme, which serves a meal to learners.

In the mornings Senoa rises as early as 4am to make a wood fire in the outdoor kitchen to warm up water for Brandon and his little sister, Mashadi, to bath. By 6.30am Brandon is on his way, walking the 45 minutes to Mesopotamia.

He covers the same distance back home in the afternoon. There is no scholar transport in the area and many learners make the long walk to and from school every day.

His family keeps a herd of goats. Sometimes on his return from school he makes his way into the hills to fetch the herd. In difficult times the family raises cash by selling some of their goats.

“We are a poor family and I want to change that,” he said this week, still basking in the glory of his achievement.

His wish is to study computer science. He has already been accepted by the University of Johannesburg. But he is not sure whether this dream will come to pass. His mother cannot afford the fees. He has applied for funding from the National Student Financial Aid Scheme (NSFAS). But a response on his application has still not come through. He doesn’t know what he will do should the NSFAS application not succeed.

But after overcoming learning under difficult conditions brought about by the Covid-19 pandemic last year, he is determined not to let anything stand in his way.

“I want to build my family a decent house,” he said.

At the beginning of last year he was part of a study group involving 12 pupils. But when the Covid-19 pandemic broke out and the Level 5 lockdown was imposed, the group couldn’t meet.

Being in a rural area with poor network connectivity and unable to afford the high cost of data, Brandon and his peers were left to rely on their study textbooks.

“It was tough not having teachers to consult. It was even more difficult because we could not meet. But I realised no one else will study on my behalf,” he said.

When they returned to school after the easing of the lockdown regulations, the learners faced challenges because some of the older teachers were barred from attending classes for fear of contracting the virus.

They had to conduct lessons via Zoom, but these were not always effective because the connection would break suddenly during lessons.

“We were worried in the beginning, but we got used to the conditions,” he said about having to sit in class wearing a mask all day and maintaining physical distancing.

Brandon and learners from villages around Limpopo, which is 85% rural, faced similar challenges. These were compounded by the high unemployment and poverty rate in these areas, where most learners’ only hope for a decent meal is through the school nutrition programme.

On Monday night, Brandon sat up in his bedroom shack waiting for an SMS to flash on his phone to announce the matric results. By midnight on Tuesday nothing had come through.

He decided to take a nap with his phone clutched firmly in his hands. The good news came at 6am the next morning. He ran to the house to inform his mother. She broke into ululation, hugging her son in celebration.

“He was stressed while waiting for the results. But I assured him not to worry. I knew that he would make it because he loves his books. He is always in his room studying,” she said.

She is now stressed about her son’s future. “We are poor. There are no jobs here. I am not working. If this NSFAS doesn’t work it’s going to be a problem.”

Her sister’s daughter, Lethabo, who is just a year older than Brandon, is studying towards a degree in chemical engineering in Gauteng. She too is being financed by NSFAS. Brandon said she encouraged him to study hard last year and he wishes to emulate her exploits at varsity, where she is due to start her second year.

With the country placed under lockdown as a result of the Covid-19 outbreak for most of last year, it was expected that under-resourced provinces such as Limpopo would be hardest hit.

“We want to emphasise that this has been a different year, a very disruptive year, and you can imagine the kind of immediate adjustments and adaptations that needed to be made,” Boshielo said. DM168