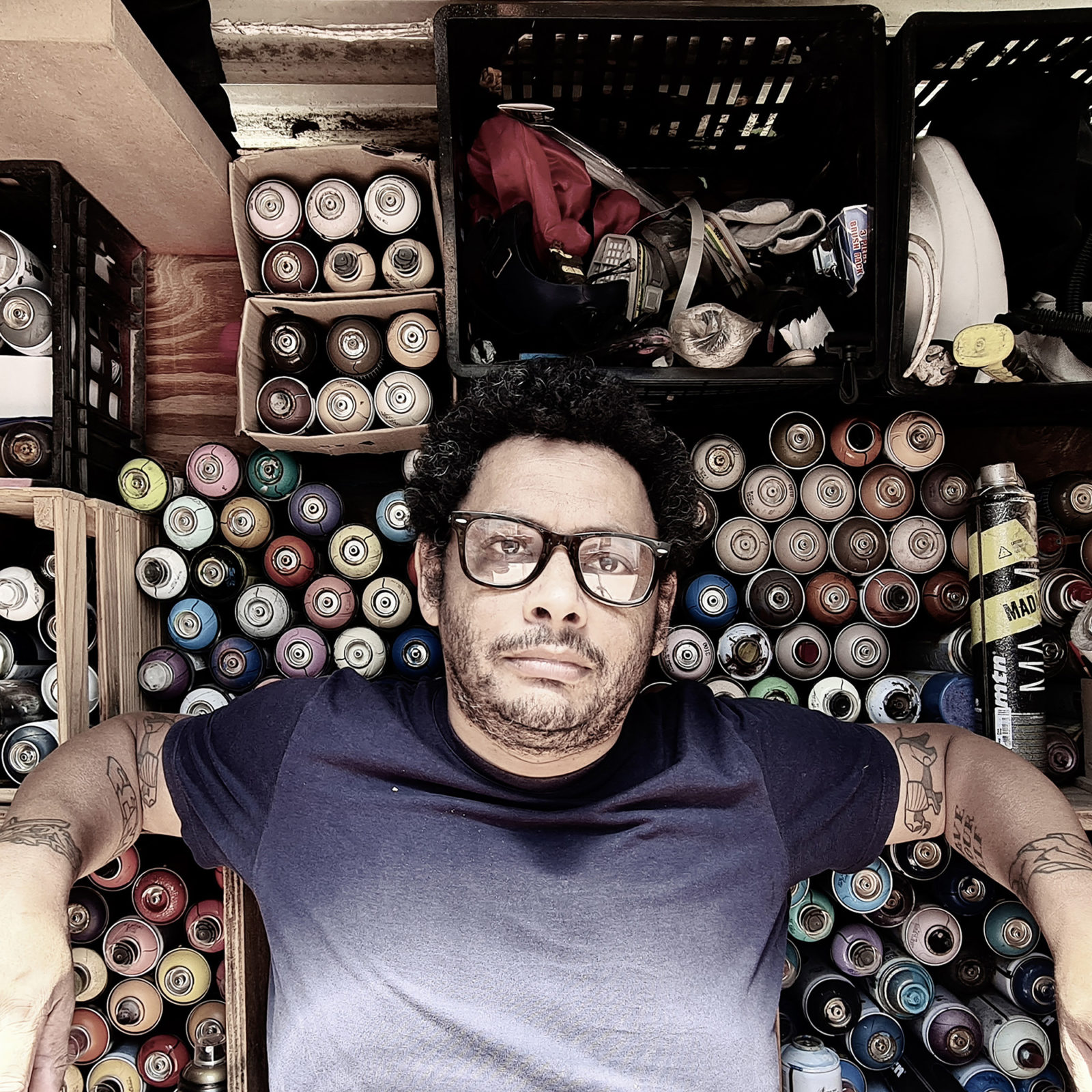 Artist Falko Fantastic has had to strip away the secrecy and carefully managed anonymity enmeshed in graffiti culture to turn street art into a viable career.

Fantasy and reality are strange siblings – as different as ever but inescapably shaped from the exquisite opposite outline of the other.

Graffiti artist Falko Fantastic seeks out these seams – it may be the rooftop of a crumbling building, under a grimy highway or in a small town that’s long been forgotten as faraway toll roads thunder with traffic. These are the places of collision but also where connections can be made.

It is in these spaces that Falko Fantastic may create one of his hallmark elephants. They are dreamlike illusions when you stumble on one or maybe a herd. They’re unexpected, full colour, symbols of whimsy but also metaphors for compassion, community and play.

When the elephants form from his spray cans to live on a wall, they become his signature and his intention. It’s leaving art where it can be claimed but not owned.

The placement of art is also meant to shake up the measure of value, and question more deeply why real life gets price-tagged. Always, it’s his invitation to keep looking, maybe long enough to shift perspectives.

Shifting perspectives matter because spaces and landscapes are always loaded.  They are about inclusion and exclusion, histories and memories, what matters and what’s discarded, and who gets to say it is so.

Falko Fantastic has known this dislocation and skewed power since he was three years old. His family was uprooted from their home in District Six in Cape Town and forced to remake their lives in Mitchells Plain. Growing up artistically gifted on The Flats looked at best like he would end up with a career as a signwriter.

Graffiti in the late 1980s and early 1990s was all about tagging – “you just want your name out there for fame” – and emulating American hip-hop culture. It was not going to be how he was going to put bread on the table, he says.

“Graffiti was never something I set out to do. Where I went to a school there was no art class, no art teachers, but we were allowed to paint on the walls, basically because everything was so derelict,” he says.

Having walls as a canvas was a starting point, even though it would take years for his graffiti to become his livelihood and purpose. Fast-forward more than 30 years. His high school tagging days are long over. He has realised that dropping out of his graphic design studies at Peninsula Technikon was the right thing to do because “they were not teaching you to be an artist but teaching you to be part of the machine of design”.

Also, he has come to the personal realisation that commissioned work may pay the bills but it takes him away from the streets and the walls and it’s the kind of imbalance that he doesn’t need.

Falko Fantastic says his art has now reached what he calls “the pimply teenage years of my career”.

Complicated because his elephants came to him relatively late in his career. It was in 2014 that they emerged as the conceptual art creation that has given him an identity and, with it, a huge social media following and international acclaim.

“I have the elephants now, which people recognise and then start to see my other works that are also in my back pocket. But I’m also not in my twenties any more and when I’ve worked full-out for four or five days it does take its toll,” he says.

He has also had to strip away the deliberate secrecy and carefully managed anonymity that is enmeshed in graffiti culture. Followers and fans want a little more. He’s had to break enough of the rules of a subculture that eschews rules as its own code. But he has to do it to become living proof that graffiti is a viable career for a boy from The Flats.

One of his more recent projects has been his “Once Upon a Town” adventure that culminated in a short film documenting his travels as an artist across South Africa, from communities beyond the city limits of Cape Town to the San and Bushmen communities in the Northern Cape, through to rural KwaZulu-Natal.

Asking for permission to paint houses with his unique creations in places where he was completely unknown was about building trust, breaking down barriers – as well as knowing when to back off.

“I never tell people what to think about an artwork that I’ve done. I like it that they have conversations about it among themselves,” he says.

And where he has left his art, his faithful followers from the cities, those with Instagram accounts, have made their way to, taking detours from their tar and toll road paths to overlooked communities, allowing other conversations to start taking shape. This, too, is Falko Fantastic’s mission now.

He has also started taking photographs of some of his works as collector’s edition prints. Many of these striking and evocative images include people from the communities or landmarks and site-specific elements. His object-inclusive style is witty and light, but also carefully crafted as connecting points between reality and the fantasy worlds he has created.

Making the collector’s edition prints has been his way to be on the streets doing what he loves and still be able to pay the bills. They also exist as lasting imprints because his works are made to fade or to be painted over. As he puts it: “If it dies, it dies, but it served its purpose for that time.”

“The photographs capture the people, the moment, a gesture. But I always try to explain to the people that are not the focus of the photograph but they become part of what I have curated in that image,” he says.

But curating for an audience is also something he’s grappling with – more of the awkward pimply teenage stuff, and he’s still figuring out how it lands. He says social media can squeeze out honesty when a handful of emojis stand in for critical commentary, but his customer base is on there too.

“Sometimes I’ll post something that I think is controversial and the comments I get back are ‘I love it’ when I expect more conversation, even some criticism,” he says.

Falko Fantastic talks about graffiti as a kind of fate in his life. But it’s not an accident that, in a world in which artworks last as long as a season of rainstorms or someone else’s coat of paint, he’s had an enduring presence.

His impact isn’t fleeting because he hasn’t forgotten the throb of the streets or the power and humility that can come from a can of spray paint. DM168