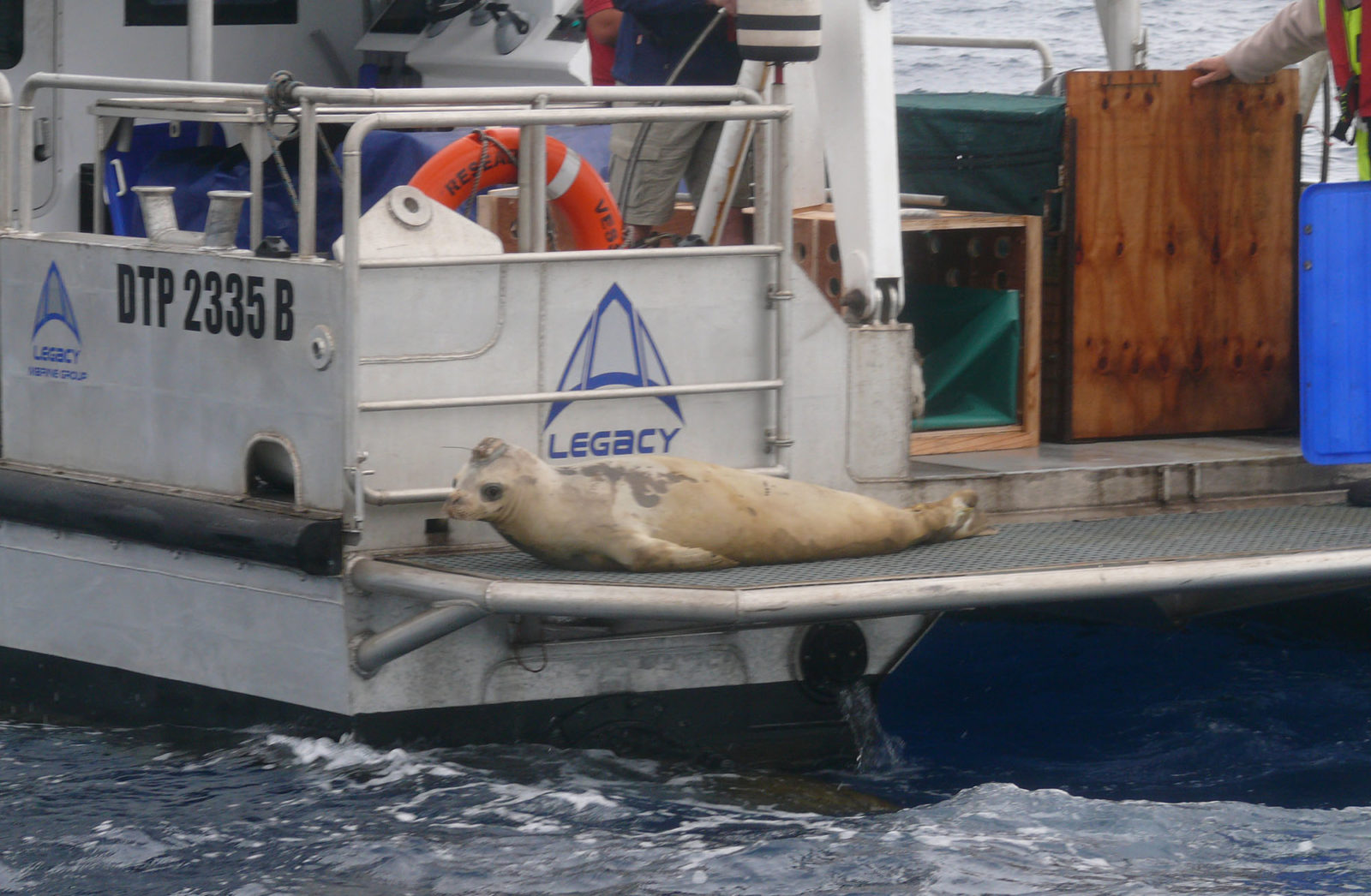 Two seals inexplicably ended up at different spots along South Africa’s coast on the same day in January this year. (Photo: Supplied)

Two seals that landed at different spots on SA’s coast on the same day in January have become the focus of marine experts keen to figure out how they got here – and where they will head to next.

They are probably from Antarctica and during a three-week stay in South Africa have, between them, splashed in pools, taken a private flight, and gone on a bakkie and a boat trip. What sets these “tourists” apart, though, is that they have become the first visitors of their kind here to have satellite tags stuck to their heads so their further travels can be tracked … and they are seals.

Two seals that inexplicably ended up at different spots along South Africa’s coast on the same day in January this year have become the focus of marine experts keen to figure out how they got here and where they will head to next.

The seals – crabeaters (although their name is a misnomer because they actually eat krill) – are found along the coast of Antarctica, so their occurrence along South Africa’s shoreline is rare.

Two crabeater seals being found ashore here on the same day is exceptionally unusual. Greg Hofmeyr, curator of marine mammals at Bayworld in Gqeberha (Port Elizabeth), said that over 65 years only 32 crabeater seals have ever been found along the country’s coastline.

The two that found their way ashore on 28 January this year have become the first ever to be fitted with satellite trackers and released into the sea from South Africa. This happened last Friday. “By fitting the satellite tags we’ll be able to learn from their behaviour at sea,” Hofmeyr said.

Both seals were found to be males, between one and two years old, and weighing about 60kg each, and about 1.6m in length.

Given their size, it was unlikely that people had been involved in getting them to the coastline. It was believed a natural occurrence had seen them ending up in South Africa.

Fannie Shabangu, a marine biologist in the Department of Environment, Forestry and Fisheries, said this country’s coast was “the extreme end of their distribution range”.

“Seals are known to use ocean currents to travel between areas, thus it is likely that these seals might have been caught up on the same ocean current during a storm while travelling at sea that landed them here in South Africa,” he said.

“The strong offshore returning Agulhas Current might have carried them from the Antarctic Circumpolar Current and landed them to Durban and Port Elizabeth where the Agulhas Current starts to ‘hug’ the coast of South Africa.”

Hofmeyr explained that the mystery of the marine mammals cropping up along the coast started on the morning of 28 January when an acquaintance from the East London Aquarium messaged him to say a seal was found ashore in that area.

She accompanied the message with a video clip of the seal which she thought might be an elephant seal.

It turned out the seal was a crabeater.

A short while later, as Hofmeyr was preparing to make his way to that seal, another associate based in KwaZulu-Natal messaged to say a seal had been spotted along that coastline.

Accompanying the message was a photograph of the seal – an astounded Hofmeyr identified it as a second crabeater.

Very few people live on Antarctica, where the seals were suspected of being from, meaning they would not necessarily have been afraid of humans, having probably never encountered them before.

But this was not to the seals’ advantage.

There were fears that the one in the East London vicinity would be harmed because it came ashore at a perlemoen poaching hotspot. It was decided that for its own safety the seal would be transported to and cared for at Bayworld.

This seal was named Sebastian after the crab character in the animated Disney film The Little Mermaid.

Meanwhile, the crabeater seal that had washed ashore along the KwaZulu-Natal coast was taken to uShaka Sea World in Durban. This one was named Ragnar, after the legendary Viking leader Ragnar Lothbrok.

Hofmeyr said that in the 1980s a crabeater seal had been found ashore and was cared for at Bayworld for more than a year.

It had died because of sand that compacted in its stomach: the seal had swallowed sand in water when eating, an issue that had not affected other animals.

Hofmeyr contacted a former Bayworld staffer who was familiar with this previous case, and who gave him tips on how the crabeaters could be cared for.

Sebastian, he said, quickly adapted to life in a rehabilitation centre and ate lots.

Meanwhile, a post on the South African Association for Marine Biological Research (SAAMBR) website said Ragnar was “only the third recorded Crabeater seal that has been seen on the KZN coastline over the past 40 years.”

“One of the ways the staff helped him adjust was to make loads of ice blocks which they placed both in and out the water. He loves to rest next to or on top of the ice blocks when he is on the side of the pool and whilst swimming he pushes the ice around the pool.”

The SAAMBR post said that, for the first four days, Ragnar showed little interest in humans or the food he was offered – defrosted fish as opposed to the krill he was used to.

On the fifth day, with the lights switched off when offered food, he seemed more curious as to what was provided and started eating up to 3kg of it a day.

The post said that Ragnar – whose “favourite food is corvina [a type of fish] and squid which he literally sucks up with a mouthful of water” – soon became interested in staff, checking if they were carrying cooler boxes.

Yet Anna Eyre, one of his caregivers, was quoted as saying: “Although we are delighted that he has regained his confidence both in and out of the water, his association with humans and food is not a good thing. Going forward from today, we will remain out of sight when we feed him.”

Both Ragnar and Sebastian were cared for over roughly three weeks at the centres in Durban and Gqeberha respectively while preparations were made to get them back out to sea.

On Thursday, 18 February Ragnar, kept in a wooden crate, was driven from uShaka Sea World to Virginia Airport in Durban where he was loaded onto a private aircraft – a service provided free of charge by non-profit conservation-geared company The Bateleurs – and flown to Gqeberha.

When Ragnar eventually arrived at Bayworld, he was released into the pen Sebastian was being kept in.

At first the two were wary of each other.

“Initially Sebastian was a lot more aggressive. He was hissing,” Hofmeyr said.

Both seals were then sedated, and marine epoxy was used to attach satellite tags to the tops of their heads. Tests – including X-rays, measurements and weight capturing – and samples, including fur trimmings, were also done.

By the end of 18 February, the seals were back up and about and they soon bonded, with Hofmeyr adding that “when we left that night, they were lying next to each other”.

On Friday morning, 19 February they were driven by bakkie to a slipway at Port Elizabeth harbour and after a 65km boat ride, they were released into the Agulhas Current, meant to help them in the first stretch of their journey possibly back towards Antarctica.

By Thursday Sebastian’s tracker had last shown his whereabouts on 21 February about 50km south of Mossel Bay. It was not clear what had happened to him since.

Ragnar, after a short while in the Agulhas Current, had swam back towards South Africa. DM168