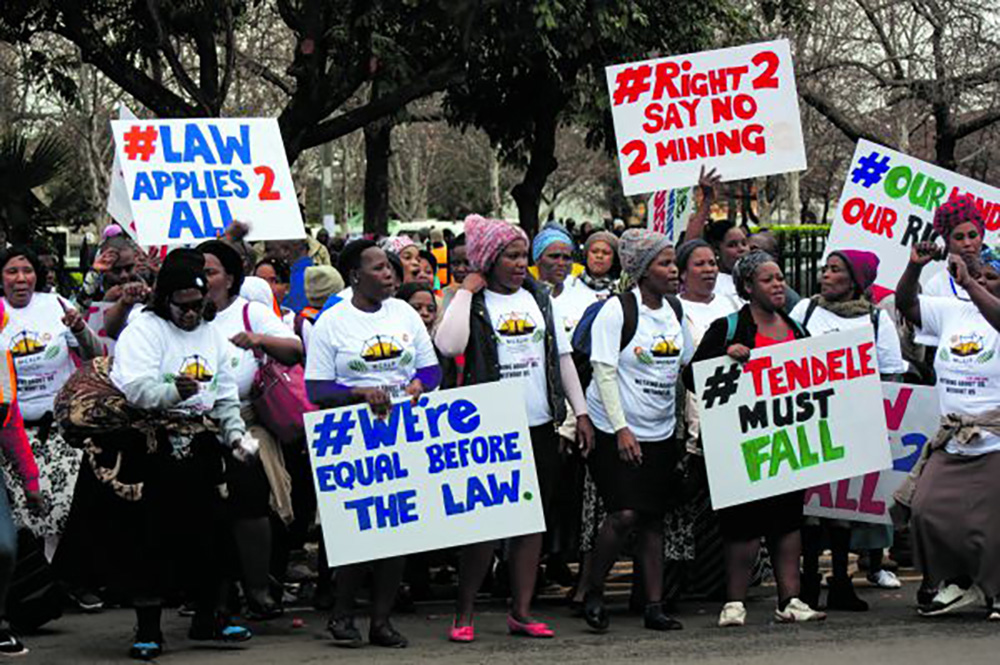 Women from the Somkhele area protest against Tendele Coal Mining outside the High Court in Pietermaritzburg. (Photo: Rob Symons)

Community and environmental groups took a beating – twice – when they challenged a major mining company in the courts. But they remain determined to fight all the way to the Constitutional Court.

It takes a brave legal team to contest a 4-1 majority ruling by the Supreme Court of Appeal. But that is the decision taken by a group of lawyers representing groups opposed to the expansion of one of South Africa’s biggest anthracite coal mines. Their position is that the government has a constitutional duty to safeguard their health and the environment by providing carefully considered authorisation for all major developments – including mining industry activities that have long been shielded from direct oversight by the Department of Environmental Affairs.

But while this battle drags on in the genteel atmosphere of courtrooms, the people affected by 14 years of mining in the Somkhele area near Mtubatuba in KwaZulu-Natal have been living with water and air pollution. They have been pulled apart by violent conflicts, lost homes and farming land and faced the murder of 63-year-old anti-mining campaigner, Mam’ Fikile Ntshangase, by three unknown gunmen in October last year.

Earlier this month, the Supreme Court of Appeal dismissed an appeal by the Global Environmental Trust (GET), the Mfolozi Community Environmental Justice Organisation (MCEJO) and local resident Sabelo Dladla after they asked for an interdict that would effectively shut down the Somkhele coal mine until it obtained formal authorisation.

The court case began in August 2018 when GET, MCEJO and Dladla launched an application in the Pietermaritzburg High Court, alleging that the mine was operating illegally and in contravention of various legislation.

The mine, owned by Tendele Coal Mining, is located in a rural area on the boundary of the Hluhluwe-iMfolozi Park. They argue that Tendele has been operating since 2007 with mining permits from the Department of Mineral Resources but without formal authorisation in terms of amendments to the National Environmental Management Act (Nema) that came into effect in 2014.

But Judge Rishi Seegobin rejected the application and supported Tendele’s position that its operations were protected by transitional arrangements that allow mining companies to continue operating lawfully despite the 2014 environmental law change.

GET, MCEJO and Dladla took the case on appeal late last year, arguing that Seegobin had erred in his ruling, but the Supreme Court of Appeal also ruled against them in a majority verdict written by Judge Visvanathan Ponnan.

A four-to-one majority is an emphatic defeat – but the GET legal team is preparing for one final round in the Constitutional Court, buoyed by the dissenting ruling from appeal court judge Ashton Schippers.

Kirsten Youens, the Durban environmental attorney who represents GET, MCEJO and Dladla, believes that both judgments focused too closely on legal procedures rather than justice and she believes the case has good prospects in the Constitutional Court.

Schippers has expressed concern that the recent judgments create uncertainty about the interpretation of laws regulating the mining industry that could weaken the protections written into the Constitution and potentially allow mining companies to “flout” the rule of law.

In the first High Court case, Seegobin commented that the applicants “failed to make out a proper case” for the legal relief they wanted: “The applicants have simply failed to put up cogent evidence to support their contentions that Tendele is mining unlawfully and without the requisite authorisations, environmental or otherwise.”

He also emphasised the procedural importance of motion proceedings, where an applicant had to stand or fall by the founding affidavit and the facts alleged in it.

In his view, a “proper interpretation” of the relevant law amendments suggested that environmental management plans (EMPs) have the same legal status as environmental authorisations in terms of a transitional legal provision. “One can well imagine what would have happened if this was not the case: the result would have been to render existing lawful mining operations unlawful overnight. This would have been an unreasonable and unbusinesslike  result.”

Writing for the majority in the Supreme Court of Appeal, Ponnan supported the high court ruling, commenting that he was surprised that Seegobin had granted the applicants permission to appeal to a higher court.

The majority also emphasised the importance of meeting evidentiary and procedural requirements in the original High Court motion court proceedings. “If, as [Seegobin] correctly points outs, the factual allegations relied upon by the appellants were, ‘for the most part, incorrect and unsubstantiated’, that, one would have thought, would have been the end of the matter.”

Nevertheless, Seegobin had felt impelled to grant leave to appeal to GET and MCEJO because there were “issues of interpretation and questions of legality that may arise”.

But, said Ponnan and the majority, it was not necessary for the appeal court to get into the legal interpretation of national environmental laws at this stage because the original founding affidavit was deficient.

Schippers has taken a different view of this case, stating that he was “baffled” by Seegobin’s view that the applicants’ founding affidavit did not go far enough to back their case. He also disagreed with the view that an EMP and an environmental authorisation were comparable animals. In his view, they are distinctly different: an environmental authorisation requires a far more rigorous assessment process than an EMP, which was a subsidiary document to guide employees on how to mitigate environmental impacts on a day-to-day basis.

There was also no provision in mining or environmental regulation that suggested decision-making on the environmental impacts of mining could be left to “functionaries” of the Department of Mineral Resources.

He also rejected Tendele’s position that the applicants did not require authorisation for mining operations specifically listed under environmental law.

“Tendele’s argument has no merit: it is opportunistic and contrived,” said Schippers, noting that Somkhele was one of the largest open-pit anthracite mines in South Africa.

Schippers has also raised concern that it was necessary for the courts to interpret and make a pronouncement on these critical issues for two reasons.

First, Seegobin’s order would remain binding in KwaZulu-Natal because it created a significant divergence of interpretation of the relevant laws in the KwaZulu-Natal division and other high court divisions.

“Second, the absence of clarity and certainty concerning the correct interpretation will potentially weaken the environmental protections sought to be achieved by section 24 of the Constitution and Nema. This, in turn, would result in the flouting of environmental standards and undermine the rule of law.”

It was clear, he believed, that companies with authorisations under mining law were not absolved of the responsibility to obtain authorisation under environmental law as well.

GET and MCEJO having decided to take the case on appeal to the Constitutional Court ; they have another hurdle to cross by obtaining leave to appeal against the Supreme Court of Appeal decision and they have until 3 March to file this application.