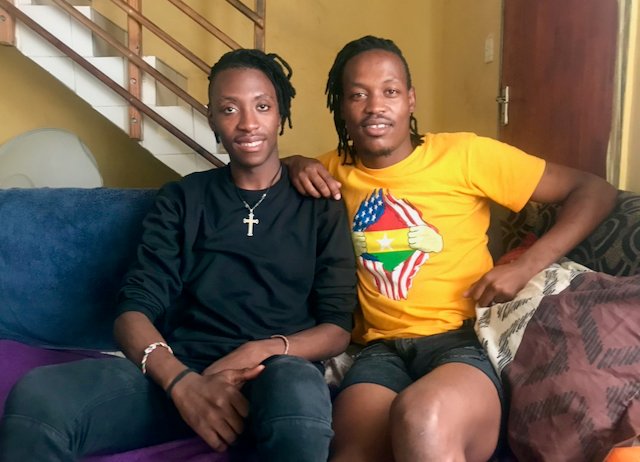 From the left, Elton Chibhebhe (23) and Shingirai Musekiwa (32) of Langa, Cape Town, say they left Zimbabwe because their country still criminalises being gay. (Photo: Tariro Washinyira)

Yet having fled Zimbabwe, they face ‘corrupt, homophobic and xenophobic’ Home Affairs in SA, says NGO.

Shingirai Musekiwa and Elton Chibhebhe fled Zimbabwe to come to South Africa because they are gay.

Now based in Langa, the activist couple is fighting for the human rights of Zimbabwean homosexuals and the repeal of section 73 of the Zimbabwean Constitution which criminalises homosexuality.

They’ve dubbed their movement Zimbabwe LGBTQ+ Crusader and say they have had interest from about 200 people.

“We are demanding that the section of the Zimbabwean Constitution that criminalise gay people be abolished. It doesn’t allow us to be who we are and to love one another,” says Chibhebhe.

Musekiwa grew up in Harare and came to South Africa in 2012 after he was disowned by his preacher uncle who raised him, he says. His parents died when he was young.

“Instead of talking to me openly at home my uncle would say horrible things and attack me during his sermons. Fearing that the [Pentecostal] church may attack or report me to the police, I ran away,” says Musekiwa.

Chibhebhe fled Bulawayo in 2017. He says his mother accepted his sexuality but not his father.

“Growing up, I used to think I am the only gay in Zimbabwe. Some of the gay people have confessed that they [only have] wives and children because the environment forced them,” says Chibhebhe.

The couple has set up a Facebook page, where Zimbabweans ask for help with coming out, coping with discrimination and dealing with family rejection. The couple plans to also run an online awareness campaign on Instagram and Twitter, and to hold a march to the Zimbabwe embassy in Cape Town.

After many people lost jobs during the Covid-19 lockdown, the couple was at one point housing 18 people at their rented two-bedroomed house in Langa. They now have five people in their home. Musekiwa and Chibhebhe are employed as bartenders in a five-star hotel.

Victor Chikalogwe of People Against Suffering and Oppression (PASSOP) said they have helped the couple with food parcels and paying rent.

He says many gay Africans seeking asylum are still undocumented in Cape Town because of the closure of the Cape Town refugee reception office. They can’t raise enough money to go to Gqeberha (Port Elizabeth) or Pretoria.

“We have a case of someone who went in 2019 and was given an appointment for 2021. When they go there, sometimes they are teased, asked silly questions about their sexuality, and told to prove they are gay.

“So some, even if they have resources to go there, they choose not to go. Some of them end up getting fake papers. Without a paper you can’t find a job, you cannot get any service …. If you go to the bank they demand a document, if your family or friends send you money from out of South Africa you can’t collect it, and you can’t apply for a residential lease.”

“The system is so corrupt and the officials are homophobic and xenophobic,” says Chikalogwe. DM