The hungriness of the long-distance walker 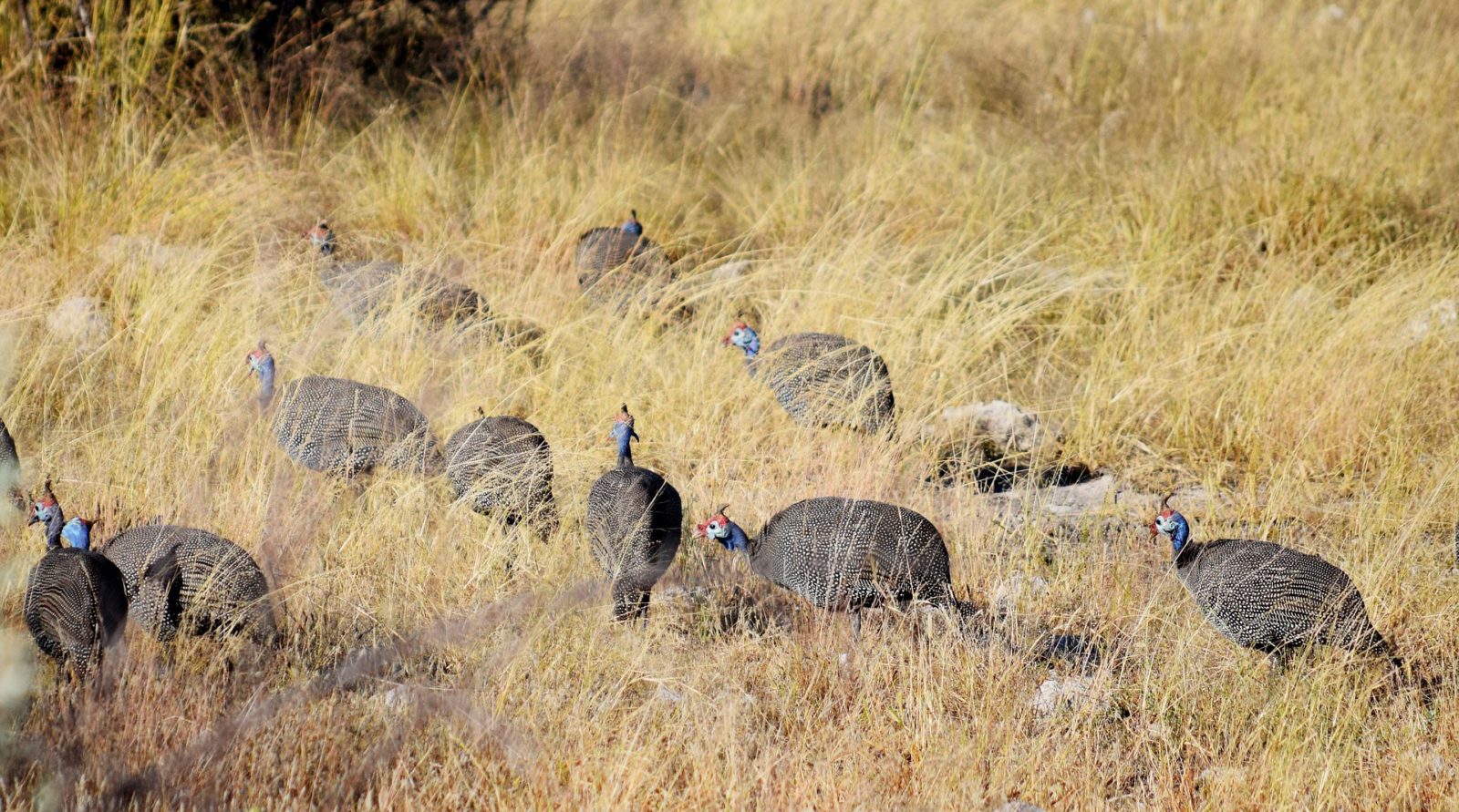 (Image of guineafowl by Lando Hamukwaya from Pixabay)

Veld foliage transforms into my spinach patch, a gnarly shrub becomes the rosemary bush at my front gate. Long walks in the lonely veld inspire the wandering mind.

Walking towards my mountain in the early morning hours, the twists and undulations of the land reshape themselves into dinner plans. A rambling creeper over somebody’s fence as I’m nearing the edge of town takes me to Centurion Way outside Chichester, and picking mulberries in the wild in walks outside of town; thoughts turn to the ripening prickly pears of our present environs, and the pomegranates now turning pink. The road snakes ahead towards a table set for supper; veld greenery suggests herbs, a lone cactus has me thinking of pears and other fruit.

Out in the veld, on the Hofmeyr road, hard-eyed birds with their eyes on roadkill turn the mind to the more succulent birds of the veld, and I make a mental note to try to organise a guinea fowl or a greywing francolin when winter sets in (Organise, n. The act of asking a farmer friend to shoot a brace of game birds for you.) The greywing francolin is what locals know as a partridge, though it’s not the same creature as the ones you might find on your British menu. I was reminded this week of the KwaZulu-Natal tradition of a “Macnab”, which requires the possibly hapless hunter to shoot a greywing francolin and a ribbok, then make a fly from the tail feathers in order to catch a trout. All on the same day. And you thought all Natalians ever did was talk about cricket in the Notties pub. The KZN pastime has its roots in the Scottish tradition of a Macnab which involves bagging a salmon, a stag and a brace of grouse within one day, based on elements of the plot of John Macnab, a novel by John Buchan published in 1925.

A passing sedan with a GP number plate has me thinking they might be headed for the Victoria Manor Hotel & Tuishuise where they will undoubtedly be tucking into their groaning Karoo buffet with its superb venison pies and chicken pies, after a biltong soup starter and then good old-fashioned roly-poly for afters.

It doesn’t harm that there are invariably two, three or occasionally four cows grazing at one spot not far from the mountain on my morning walk. Not that this is beef country as much as it is sheep and dairy terrain, but the thought is inspired nevertheless. Steaks there must be, and soon, but not tonight.

A Harley Davidson whizzing by reminds me of our Sutherland bistro days, when pairs of bikers were the best customers you could hope for; they’d eat and drink the place dry. And now I’m thinking lamb, lamb, lamb, because they’d each order a giant shank each, from the hind quarter of course, hunky and meaty, just as a biker and a lamb shank should be. Then a passing refrigerated truck reminds me that there’s a shoulder of lamb in the freezer and time enough to thaw it (all morning) and cook it (all afternoon).

A distant koppie dissolves into the shoulder of lamb and I’m picturing my boning knife in my hand because I’m wondering how to debone it. I’ve deboned many a leg of lamb before but not, until this week, a shoulder. Veld foliage transforms into my spinach patch, a gnarly shrub becomes the rosemary bush at my front gate. There we go: I’ll have a stab at deboning a shoulder of lamb, and use spinach and rosemary in the stuffing, probably garlic too.

While this has gone through my mind I’ve walked another kilometre of the six I walk every weekday morning having (re)started on the 4th of January. I had been walking a year earlier when the pandemic struck, and Oom Cyril forbade me from my daily walks. It was excruciating to have got to that point, weight loss and all, and wham, gone. It took me from late March until this January to persuade myself to get out there again, but I am utterly committed to it now. My 30 km a week has built, as I write, to 240 km in total as of Friday 26 February, and I now map it out as if I am on one long, really long, walk. I decided to imagine I was walking from Cradock to Grahamstown, and I “reached” there some time in the previous week. Then I “set out for” Bathurst towards Port Alfred, and I passed that late this week. When you read this I’ll supposedly be standing on the pier at Port Alfred contemplating the next stage of my long walk to dinner time. From there, I’ll imagine I’m en route to Kenton on Sea and, ultimately, Port Elizabeth. Yes, Port Elizabeth. (Sorry, I can’t just change a lifetime’s mindset at the snap of the Government Gazette’s fingers).

From PE, I’ll have to take the N10 back to Cradock via Paterson, Cookhouse and Daggaboersnek. With luck I’ll be home for Christmas.

Planning what’s for dinner during my morning walks makes perfect sense to me. It’s pleasure even if, in one sense, it is also work, because the recipes we publish every day in our TGIFood pages don’t create themselves. Exercising my mind while exercising my body ties in with my appreciation of the French way of cooking; picturing possibilities for the pot or pan is akin to shopping here and there during the day and working with your finds when you get home. Certainly the old French way; I don’t know whether, in ordinary times, the French still do that but I’m sure at least the older generations do, in normal circumstances. I hope the lockdown experience doesn’t change forever that wonderful ancient French habit and way of life and living.

But there’s still a bit of French thinking in me, despite the 11 months since our lockdown began. I used to shop daily, choosing what was fresh and whatever caught my eye, then plan a meal around those things. Lockdown put paid to that. Along came the farm boxes with their lucky-packet surprise element; what would be in it this Saturday? And then, and then… and here we are now.

Wednesday’s walk had me thinking about the peppermint crisp tart I’d bought the day before, because we were expecting guests who, it turned out, were being super diet-conscious and didn’t want any. When you’re a (type 2) diabetic with a fitness fetish (okay, growing habit), you don’t want a peppermint crisp tart lying around saying “eat me, eat me”. So I nicknamed it “Satan”, stuck it in the fridge and asked my sweet-toothed farmer friend to pick it up next day.

Skipping deftly past the part of the day when I had a telephonic doctor’s appointment to chat about my glucose levels (“whatever you do, don’t eat lamb”), when the early afternoon did arrive on Wednesday, I deboned my first ever lamb shoulder (it had already defrosted before my consultation), and managed to keep it in one piece. I kept my word to myself and picked three rosemary sprigs from the bush near the front gate and four spinach leaves from the far side of the property, zested a lemon, chopped some garlic and a round of feta and, after wilting the shredded spinach in a little olive oil, mixed them all together with some black pepper and spooned it onto the inner side of the shoulder, wrapped it up, tied it with kitchen string, browned it briefly, and cooked it in a covered cast-iron pot in a low oven for three hours. I’ll post the recipe next week.