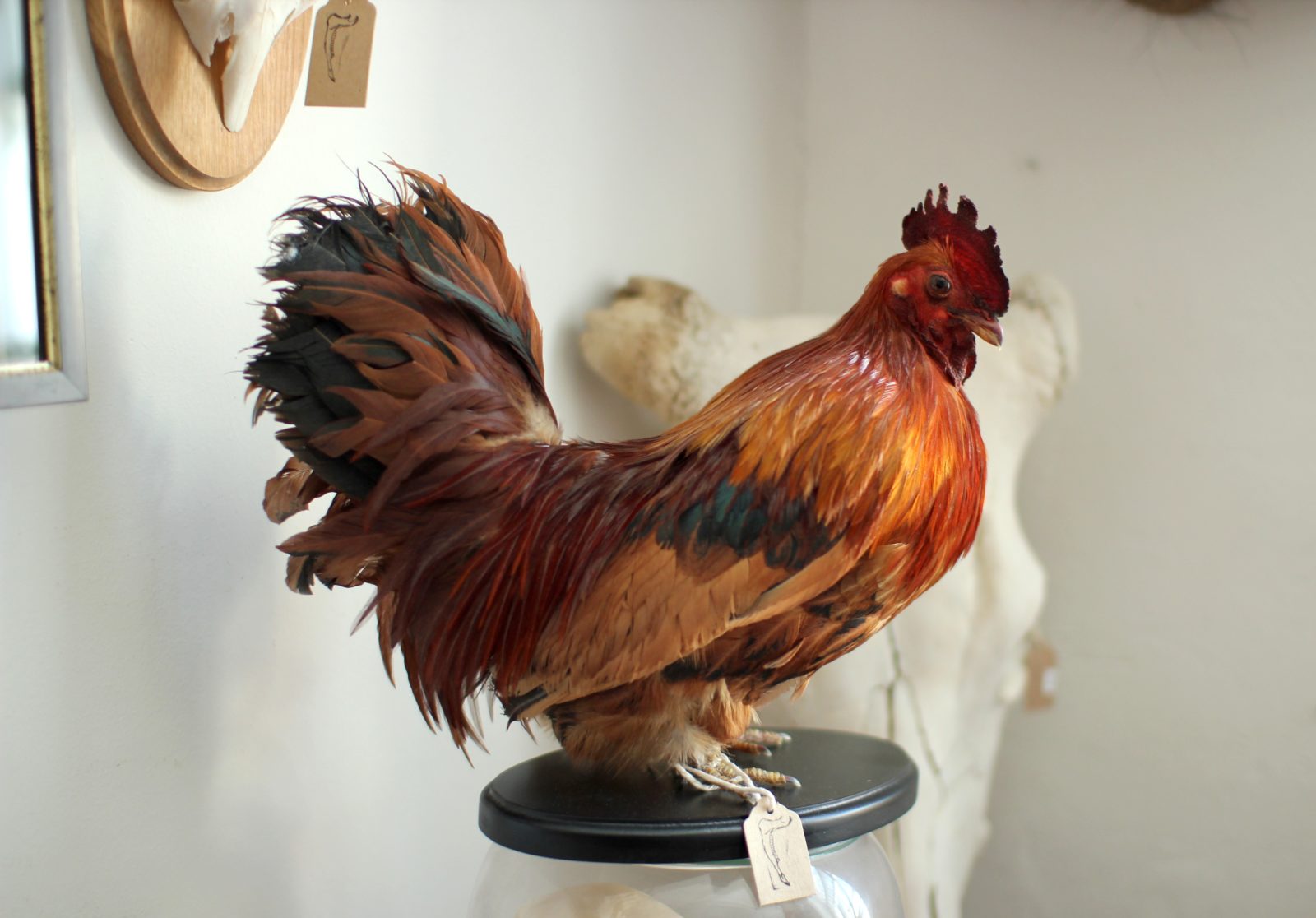 At this taxidermist’s workshop, working with the remains of dead animals goes far beyond creating hunting trophies.

He doesn’t do pets. That’s where he draws the line.

“When I had my first taxidermy business, back then I was younger, I would never turn down a job. People would ask if they could bring their pets in and I’d say, ‘yeah, sure, we’ll give it a crack’. And sometimes it was like, ‘oh, great’, and other times it was tears and drama,” says 44-year-old Cape Town-based taxidermist Philipp Schulz.

“All our birds generally come from rehab facilities, zoos or breeders. Animals that have died there, either due to injuries they sustained, that they couldn’t heal during the rehab process, shock or stress, or whatever it is. If they can’t feed the animal back into the chain… like giving it to the vultures, because they don’t know if maybe it’s got a disease… maybe someone shot it and there’s lead in it. So they keep them and I’ve got an agreement with a lot of these places to say, as opposed to just throwing them away, let’s conserve them. And then I give them a donation which then goes back into helping them buy food and medicine or whatever for the facility. And it leaves a legal track record,” says Schulz.

That paper trail is an especially important part of his trade, particularly in ensuring the business abides by local and international regulations. “The Convention on International Trade in Endangered Species of Wild Fauna and Flora (CITES) regulates the trade of live and dead animals on an international scale. It could be anything from coral, plant, invertebrate, or any animal they feel is threatened or near-threatened, vulnerable or endangered… And you do not trade in anything that’s CITES I-listed (specimen). It’s very difficult and will only be through educational institutions or museums. CITES-listed animals also require a permit to export,” he explains.

“So admin is a big part of the job, to ensure everything is transparent and regulated. It doesn’t matter if it’s an owl skull or just a couple of owl feathers, or a whole [taxidermised] owl – if it’s CITES I-listed (specimen) you need a permit. And it’s good that this exists, because as we all know, illegal smuggling of wildlife is a huge problem.”

But regarding animals that don’t fall under any legal prohibition, pets remain a no-go zone. “When clients bring you a pet, it’s a creature that’s been with them for years. But for me, it’s just a creature in a bag, frozen. I have no idea what it looked like when it was alive, what little things it did with its eyebrows. I can’t replicate that. Say you brought me a medium-sized dog. My reference would be, you know, a jackal, because we generally just deal in wild animals. And the person would come and be like, ‘Well, you know, that’s not what Rover looks like at all. He didn’t do that, he had his ears down a little bit’. Unfortunately, I didn’t spend eight years with Rover, so I don’t know,” says Schulz.

Much of Schulz’s work is far less dramatic. While he has been a professional taxidermist since 1997, his trade is not strictly limited to taxidermy. He and partner Julia Jaki founded Mandibles, a “natural history collection” store, in 2012, where they sell a range of items including horns, skulls and taxidermised birds, mostly to interior designers and other areas of the décor industry.

“We’ve been together since 2010. And I moved here in 2012,” says Jaki. The pair met in Kenya while on a television shoot which Schulz was also working on. Originally from Germany, Jaki was in Kenya at the time as a television producer. After two years of a long-distance relationship she decided to move to Cape Town, “for Philipp”.

“I didn’t have a clue about taxidermy, but I started to appreciate it. I’d quit my job in Germany at the production house. It was tough at the beginning working as a freelancer. But Philipp was also getting lots of inquiries at the time, and we were offered a [retail] space at The Woodstock Foundry. I had a feeling this was going to be a success, you know, opening up the shop. A friend of ours in Germany made a logo, and we came up with the name. And honestly, it went so well,” she says.

Eventually, Jaki’s television work picked up and she found herself struggling to look after the shop. In 2017, they decided to close it and go online. “It was just me running it, and I work as a multimedia journalist. So, it was just a side business. I realised I couldn’t sit there, but it was very difficult to find somebody to work at a taxidermy shop; we really struggled finding the right person. And then we were like, ‘Come on, let’s just go online’,” she explains.

Schulz also owns an export company that sells taxidermy and natural history products to collectors, museums and retailers worldwide. “The range of clients is so big, and the end use [is varied]. Such as knife handles – we sell kilos and kilos of warthog tusks every year to knife makers in Italy who polish the tusk and that becomes the knife handle.”

Kudu horns are used to make the shofar, he adds. The name is the Hebrew word for a musical horn typically made out of a ram’s horn. Then there’s the business from Krampus, the horned half-man, half-goat figure of Alpine mythology.

“That’s totally crazy. It’s a tradition in southern Germany, Austria, Switzerland and part of the Czech Republic, and it’s spreading to other parts of Europe, where – I don’t know the exact origin of its folklore – but at a certain time of the year, in small towns, they dress up in these costumes and they have a parade in the town. I think initially the concept was to scare the children for some reason, something to do with Christmas. It’s become such a big hobby for so many people that these Krampus events have become competitive and bigger and bigger. They incorporate hides of bison or sheep and put horns on top of very elaborate masks. Oh man, they’re frightening.

Besides supplying accoutrements to the domains of décor, religion and mythology, Blueduiker is also the kind of business museums reach out to for educational purposes. Once, Schulz worked on a hippo for a German museum: “They wanted an entire hippo. So we found a farm in Limpopo that had a problem animal that was coming into the crops, so the conservation authorities issued a permit to the farmer. I got in touch with him and said, ‘can we export?’ Then the province gave us a permit and we got it down here and cleaned the entire carcass. It was a rigmarole and took ages.”

He and his team carefully put the skeleton back together before sending it to the museum. Schulz was particularly proud of this project, but when he asked later to see what it had done with it, the museum said: “Oh well, it’s all in bits and pieces and rolls and it’s not on public display.”

“I said, ‘what do you mean?’ and they said, ‘oh no, this is just merely for educational purposes, when students come in and do what they call bone reference, comparing it with fossils and stuff like that. It’s all spread out over shelves, in archives and categories’. I said, ‘but why did we put this whole thing together if it was going to be in bits and pieces anyway?” Schulz laughs, although it wasn’t funny at the time.

Working with animal hides and carcasses is not for the squeamish, but learning how to get into taxidermy is a relatively short process. Before closing the shop in Woodstock Schulz ran two-day workshops. “There’s not much involved, especially with birds – you can do bird taxidermy in a very small space with equipment that you could get at a pharmacy, supermarket or hardware store. That said, it’s a finicky process, so if you like making puzzles or putting little chips together, taxidermy might be your thing. If you’re not squeamish and you like working in detail, it’s a wonderful hobby or profession.” DM/ML

My dad, the pandemic and grief that comes from never saying goodbye