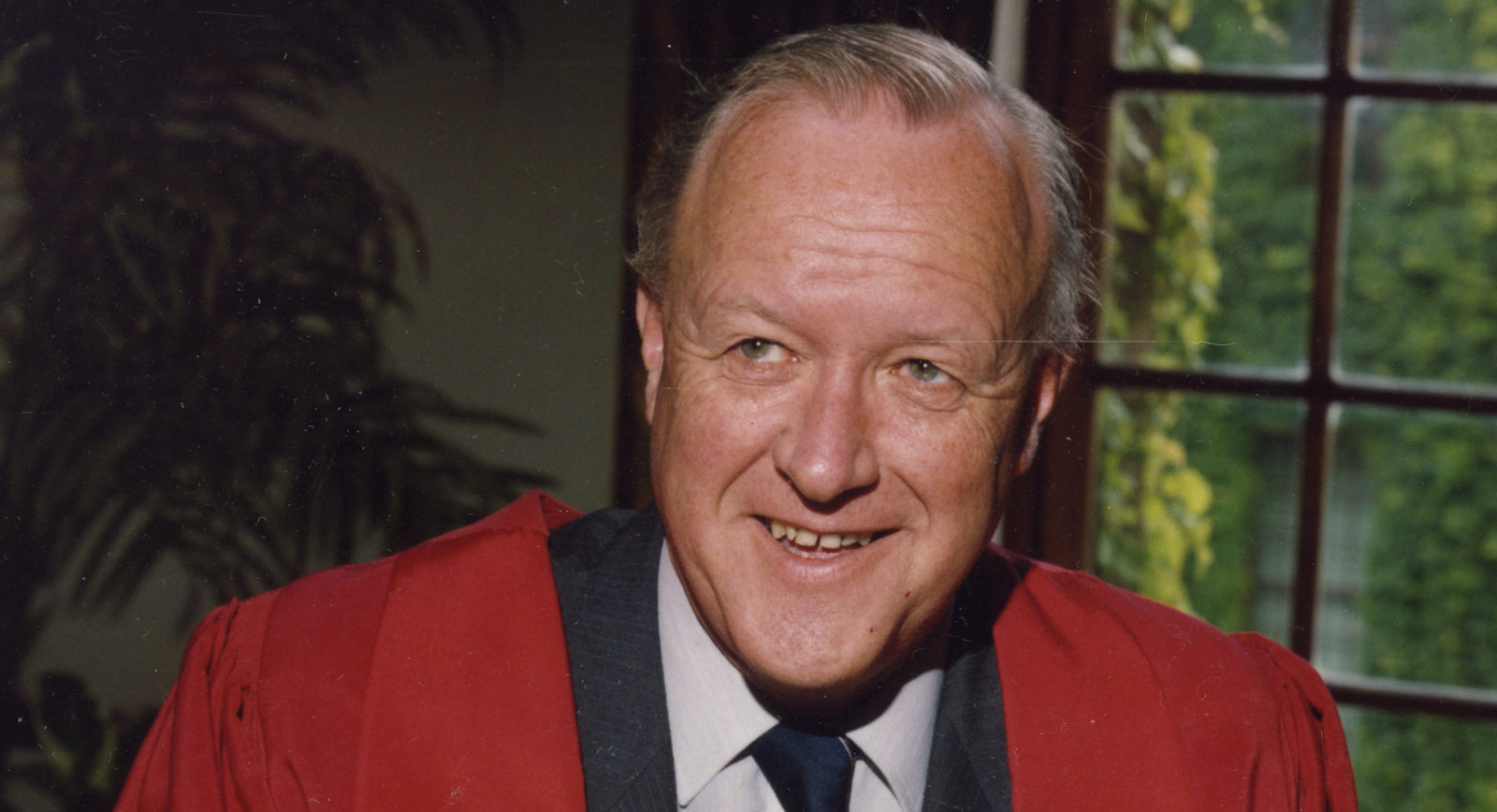 On Wednesday, 24 February 2021, UCT hosted a memorial service for its sixth vice-chancellor and former head of the Department of Medicine, Dr Stuart Saunders. (Photo: University of Cape Town)

Former UCT vice-chancellor Professor Njabulo S Ndebele pays tribute to his predecessor in the role, Dr Stuart Saunders, who died on 12 February 2021 after a short illness. Dr Saunders was UCT’s VC from 1981 until 1996.

I received the invitation not long after I was appointed as deputy vice-chancellor at the National University of Lesotho to deliver the graduation address at the UCT graduation ceremony of the Faculties of Art, Fine Art and Architecture. It took place on the summer afternoon of Friday, 9 December 1988.

I accepted the invitation after a great deal of introspection. South Africa was in a deep state of turbulence since the declaration of a state of emergency in 1985. I wondered about the wisdom of going there from my place of safety in Lesotho. Nevertheless, as I was able to travel in and out of South Africa on a Lesotho passport as a naturalised citizen of that country, the desire to take a peep back home was strong. Also, I still held strong reservations about “white’” universities, particularly the “liberal ones” in the country of my birth. In my book they were all a part of apartheid’s institutions.

I landed in Cape Town on Thursday, the day before the graduation. Mid-morning on the day of the graduation Vice-Chancellor Stuart Saunders and I shook hands as he welcomed me into his office at the Bremner Building on lower campus for a scheduled meeting. Together with the warm handshake, I also registered one of his trademarks: the fatherly smile. It was part of the essence of the dignified presence of authority he projected.

I now know that he was 57. Then, had I known, I would not have thought he looked it. I was 40 and probably looked at it with that self-conscious assertiveness of a Black Consciousness young black man in the corridors of whiteness who was on the lookout for any signs of condescension from a white man. I was uneasy that I detected none. Instead, I sensed in him a kind of reaching out that came across as a thoughtful, even humble, invitation to ponder an issue against the much broader complexities of a country at war with itself.

That’s what I thought I read on his face. Unexpectedly.

Pausing after the preliminary civilities, Dr Saunders, sitting opposite across the light-brown wooden table, picked up a booklet as if he was pondering it. He then carefully turned some pages, his mind searching for the next utterance. When he found the words, it was something to the effect that what he had been reading and at that moment looking at was outstanding writing of deep insight. He went on to say something about how UCT would be greatly enhanced by the presence of an academic who thought and wrote this way.

The words, his face and body language came across as expressing genuine admiration and respect.

What he had in his hands was a copy of the English Academy Review. He was referring to my keynote address, “The English Language and Social Change in South Africa”. I had delivered it at the Jubilee Conference of the English Academy of Southern Africa at the University of the Witwatersrand (Wits) in the spring of September 1986. I recalled the prolonged applause at the end of my delivery on that morning at Wits.

This compliment took me by surprise and upset my expectations of some kind of political trading. If the expression “cooling of the temperature” meant anything, it probably stemmed from such a moment. I felt enticed by the merits of a possible mutuality of interest in which the currency of intellectual exchange could have a life of its own amid the politics of everything.

Later I would piece together the elements of a broader logic of purpose behind that moment in his office with Vice-Chancellor Saunders. I would return to UCT, I am not quite sure how long after my first visit, to be interviewed for a Jagger Fellowship in the Department of English. I have looked back to that moment with Stuart in his office as a masterclass in the soft art of recruiting talent in a complex environment. In the total scheme of things I never imagined, as I sat there with him, that my visit to that office would be the first but not the last; that I would, in some unimaginable future, go in and out of that office for over the greater part of eight years, as one who would receive people there and not the other way round.

As it turned out, in 2000 I received him in my office when he came to congratulate me on my appointment as vice-chancellor and to request that he be allowed to continue with raising funds, particularly in the United Kingdom, for transformative projects at UCT. The bond of mutual respect had long been established 12 years earlier. It would enable us to work together in the service of a phenomenal university. And so we strengthened the bond, across the light-brown wooden table.

At the core of Stuart Saunders as vice-chancellor and as a human being – the one as an institutional leader, the other as a person – were the sources of his gravitas: genuineness, believability, integrity and the calm intelligence of an intellect that was as discerning as it gave conviction and warmth to his personality. It is these outstanding qualities that must have given him the conviction and courage to break down barriers set up by hostile state officialdom.

The same qualities were the sources of his deep respect for the talented downtrodden wasted in their millions by racist stupidities that got structured into state governance systems and laws: the brutal waste of human beings. He would get the talented downtrodden in their numbers into one of the great South African universities of the world. That’s what got Stuart Saunders to go out of his way, tirelessly.

He laid firm grounds for the UCT of today and will be remembered and honoured by generations of future South Africans. DM

Professor Njabulo S Ndebele was the vice-chancellor of UCT from 2000-2008. He is an academic, writer and thought leader. He is the Chairperson of the Board of Trustees of the Mandela Rhodes Foundation, Nelson Mandela’s official legacy organisation that aims to build exceptional leadership capacity in Africa.