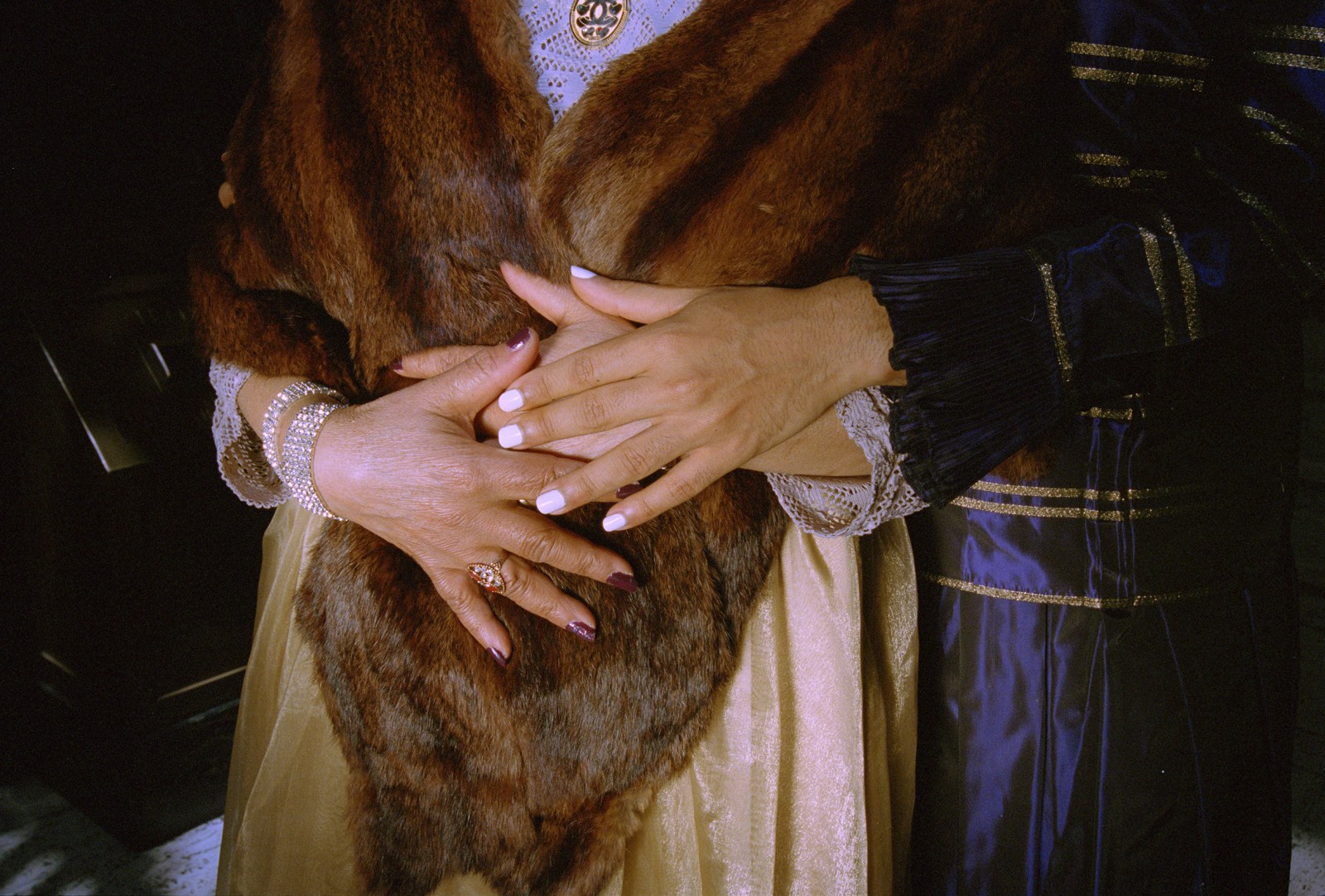 The Norval Foundation’s new exhibition, ‘Mixed Company’, explores the act of social gathering and the absence of it in our current situation.

“Politically, socially, and creatively, we need to be around each other on some level. Maybe that’s virtual for now, but there’s something about the physicality of being able to hold on to each other that is just human at its core. It’s essential,” says Khanya Mashabela, the Norval Foundation’s newest curator, on her recently opened exhibition, Mixed Company.

Featuring works by 11 modern and contemporary South African artists, the exhibition ruminates on the act of social gathering in all of its varied forms. An act that has taken on an unbelievable (and unprecedented) complexity in our Covid-19-riddled contemporary moment.

Tucked away on the second floor of the museum building, the exhibition space is a single room, relatively small compared with its flashier counterparts on the first floor. Through the windows one can see the incredible landscape that surrounds the foundation: the summer green of Table Mountain, speckled with colourful flower dots and, closer, the monumental structures of the sculpture garden.

Every wall is filled with people. People gathering to work, to kiss, to party. Ringed by these images and with glimpses of the sublime surroundings, the exhibition feels like a classic Cape Town scene that we have all come to love (and now, to miss): a bustling party with an incredible view, the gorgeous combination that leaves you feeling somehow invincible and tiny at once. Except here and now, the bodies in the room are cold, and the space – silent apart from the echoing steps of the one other person viewing the exhibition – is still.

Much like the best parties, Mixed Company is dynamic and diverse. The abstract, vaguely human-looking shapes of oil paint, shining sequins and tinsel in Kresiah Mukwazhi’s Chemical Reactions dance colourfully on one wall. Another is entirely taken up by Musa N Nxumalo’s black-and-white photographs of an event with Vogue Nights Jozi. The proud, scantily clad queer bodies of Nxumalo’s subjects are printed larger than life. In a corner of the room, Gerard Sekoto’s small oil painting, Evening on the Corner, depicts several shadowy figures in a circle, intent on a serious discussion. Next to that are the hazy images of mineworkers heading into a shaft, captured in David Goldblatt’s On the Mines series.

Protests, sports events and clubbing are just a few kinds of gathering that the artworks examine. “I wanted there to be something for everyone,” Mashabela says. “I wanted to mix all of these types of gathering and different bodies together in a very loose way so that people could put their own associations onto it and enjoy it for what it was.”

Mashabela supplemented her access to the foundation’s epic collection by borrowing works from several femme-identifying artists, including Jody Brand, to “try and create some balance in the exhibition”. Works by more traditional male modernist artists, such as Leonard Matsoso and John Muafangejo, are included alongside the work of trans artists including Dada Khanyisa. Everybody got an invitation to Mixed Company, and everybody feels welcome at the party.

The inclusion of these varied bodies, shapes and colours, while aesthetically and energetically invigorating, becomes an important point of resistance or questioning. Mashabela explains that the title of the exhibition comes from the saying “watch what you say, we’re in mixed company”, an antiquated (and racist) way of implying that one cannot talk freely about race when a person of colour is present. Mashabela flips this on its head: “I thought, okay, we’re in mixed company. Let’s talk about race.”

Mixed Company, then, is a deliberation on the politics of gathering as it pertains to race. As Mashabela pointed out on a virtual tour of the exhibition: “Black people gathering for social purposes has been politicised and overly policed. That’s true thinking about apartheid and the destruction of cultural hubs, like Sophiatown, and it’s also true in the last year when we think about how lockdown was unfairly imposed upon people living in black and impoverished areas.” It’s a statement that rings painfully valid as we look at the ruins of 2020. The unlawful killings of Collins Khosa and Sibusiso Amos, murdered in the sanctities of their own homes, the international phenomenon of the BLM movement after the killing of George Floyd, are just a few cases in point. That’s not to mention the countless deaths, injuries and humiliations suffered by people of colour at the hands of the police during lockdown that did not make the national news. Mashabela’s exhibition brings up a critical question: what does it mean to talk about race in an art space that is run, at least at higher levels of authority, largely by white people in a historically white area?

The inclusion of artists who identify as gender queer (and make work that pertains to their gendered identity,) elicits a similar kind of questioning. What does it mean when queer bodies take up space in a historically heteronormative form?

Brand’s work does not stand alone in its show of anonymity. Many of works in Mixed Company feature bodies that are ambiguous, without facial distinctions or even a face at all. Initially, this gives an impression of the individual disappearing into the crowd, perhaps implying people in crowds are “sheeple”, so to speak, who have no autonomy or dissimilarity from one another. But it is also a visual manifestation of unity. In today’s disparate world, where crowds are legally banned as well as socially irresponsible, being a part of a large, unified group seems like a romantic and naïve dream. It is the act of being united, of being together, that is explored. How do we, as individuals, fit into the wider world? How can we be a part of a bigger whole, when we can’t even be together?

Thenjiwe Niki Nkosi’s painting, Ceremony, is a particularly interesting exploration of unity and the anonymous body. Part of a larger series, Gymnasium, and rendered in soft pastel pinks and browns (“it’s like ice-cream!” Mashabela exclaims), the painting depicts three gymnasts locked in an embrace. The gymnasts, all brown skinned, have their backs to the audience; we can’t see their faces, only their arms wrapped around each other in a moment of tender comradery. Gymnastics, a sport once co-opted by Nazi Germany, and with a dark history of racial issues, is finally in a moment of inclusivity in the twenty-tens, with Simone Biles being America’s most decorated gymnast to date. Ceremony is about putting bodies of colour into a space that they were historically frozen out of. The result is soothing, beautiful and inviting. “The whole idea of making them [the girls in the painting] anonymous is so that any black girl could feel like she could be in it,” Mashabela explains. “And I get it. I want to be in it.”

Spanning from artwork created in 1941 (Gerard Sekoto’s painting Workers on a Saturday) to photographs taken in 2020, Mixed Company ponders the normalcy of gathering in pre-Covid times, something that society, perhaps, took for granted until now. The diversity of the artists and the range of their ages suggests a fluidity of time: we look upon relics of the past with fresh eyes and wonder what the art of our future will look like. “With Covid right now there’s just this feeling that anything is possible. We can’t take anything for granted. Like, are we now going to have masks in movies?” Mashabela mused, gazing at the naked faces of crowds gathered in the background of Nxumalo’s photographs. In this way, Mixed Company makes the inevitability of change clear, but also the gravity of our contemporary moment. How will this horrific but pivotal moment in history be memorialised by artists in the future?

Mashabela finished the tour with a powerful statement on the necessity of human contact. “Mixed Company is not just a meditation on gathering but also kind of an argument for gathering. Lockdown has just impressed the necessity of being able to be around each other. We can have a lockdown, but it has to be temporary. There has to be a solution, we can’t just be like, oh, now we never have to be around each other ever again.” DM/ML