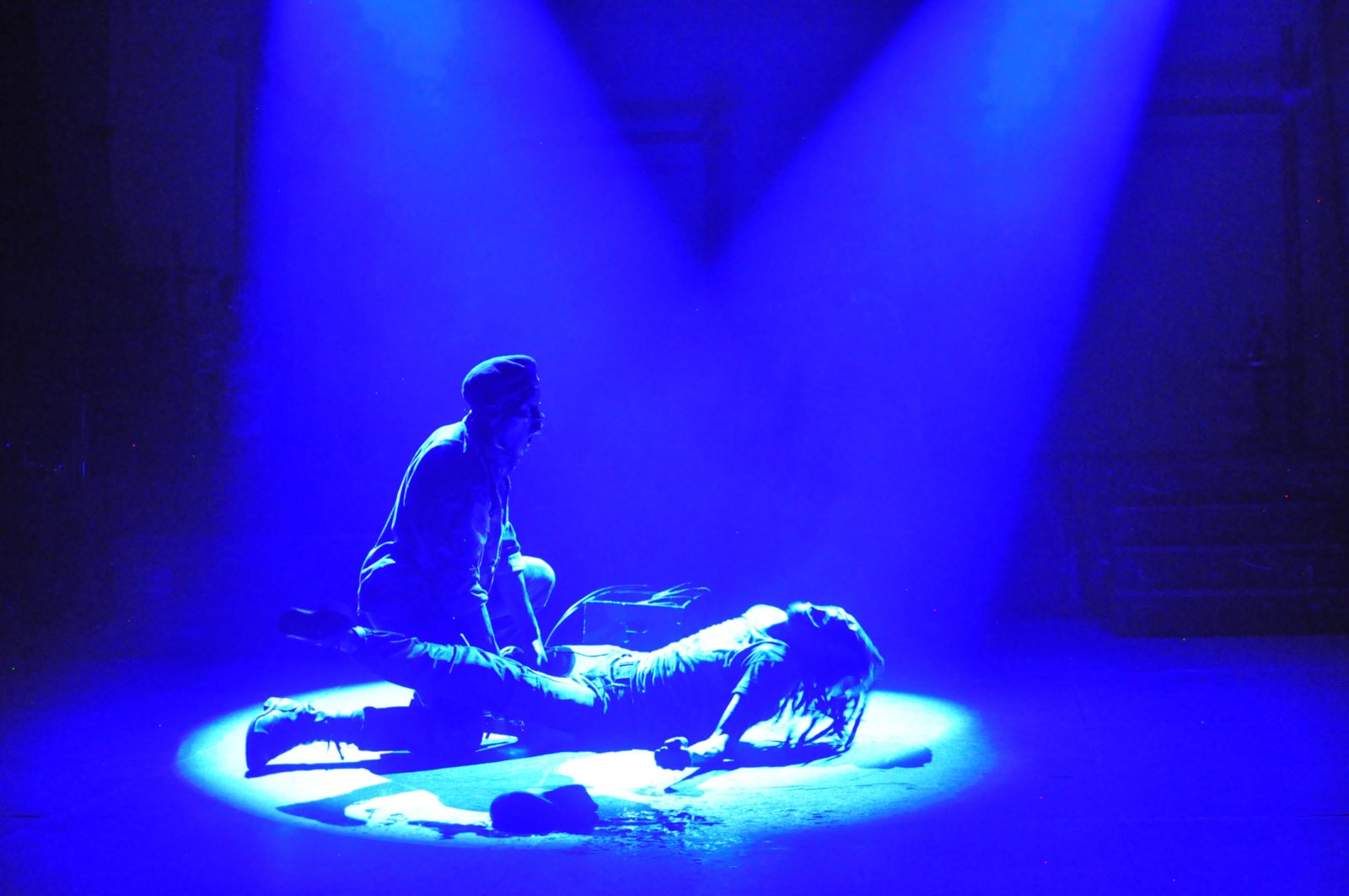 Angola Camp 13 Production at State Theatre on December 03, 2020 in Pretoria, South Africa. Angola Camp 13 is a play that is written by award winning director Sello Maseko and tells the story of a generation of committed cadres who set themselves an ambition of envisioning a society that is free from all kind of slavery and oppression. (Photo by Gallo Images/Laird Forbes)

As we approach a year of lockdown, South African creatives gathered for the Take-a-STAND Dialogues as part of the Toyota SU Woordfees for a series of panel discussions. The hope was to unpack the past, present and future of the country’s art scene and look at the impact of Covid-19 on the industry.

“It’s been absolutely impossible to keep our heads above water,” says Daphne Kuhn, the owner, producer and artistic director of Sandton Theatre on the Square, speaking on 19 February at the Take-a-STAND Dialogues, hosted by the Sustaining Theatre and Dance Foundation (STAND) at Toyota SU (Stellenbosch University) Woordfees.

Kuhn was referring to the Covid-19 pandemic that, over the last year up until today, has hit the culture industry hard, leaving creatives unable to work or provide for themselves.

In fact, Audrey Azoulay, Director-General of the United Nations Educational, Scientific and Cultural Organisation (Unesco) noted late last year that “the sector, which accounts for 30 million jobs [globally], is struggling to survive and needs our help”.

And yet, the creative industry is not on its last legs and has culture professionals fighting for the opportunity to take the stage again, saying that art is vital for South Africa to thrive.

Cornelia Faasen, the CEO of the National Afrikaans Theatre Initiative (NATi), says, “Theatre and dance and all the art forms are what we need to hold sacred because they are our saving grace.

“That holy moment of assembly in the theatre, that sense of community and that immediacy of the theatre is the one thing that can save us as a species. And I know it sounds dramatic, but I mean it.”

“Theatre brings joy, it makes us happy and keeps us sane,” echoes Mxolisi Masilela, the founder and director of TX Theatre.

On this, applied art practitioner Malika Ndlovu adds that art, in all of its forms, can be used as a medium of healing and has been a way for her to work through the effects of South Africa’s history in her own life, something that many South African artists can relate to.

“My identity had to be unfurled and the trauma of being of mixed descent in this country under apartheid meant I needed some kind of therapy. That’s what poetry was, that’s what theatre was.

“I have practised pretty much every form of art and it’s all a way of navigating reality, experience, identity, spirituality – and it’s medicine. And I have one simple purpose in doing it: I did it for my own sanity and healing, and I did it for remembering. And ‘remembrance’ is a very powerful word. We must keep the legacies alive, we must speak our cultural heritage into the future,” Ndlovu says.

Just as culture is an important tool in navigating the trauma of South Africa’s past, in a country that has been battered by the Covid-19 virus, perhaps culture brings with it an opportunity to work through the impacts of the pandemic.

Who does not need to grieve? This is what we are doing when we dance, when we make theatre, when we write, when we perform, [we are] channelling and facilitating and creating rituals

“Dance for me is not about a dance step: dance is a healing tool for those who have been broken one way or another,” says Sbonakaliso Ndaba, the artistic director of the Indoni Dance Academy.

Because of this, many of South Africa’s creatives remain hopeful, choosing to focus on the positive impact that culture has on society and on its ability to bring about change through art.

“There’s something about the language of theatre that even when an actor doesn’t say a lot, we are feeling things. There’s music in the silence. There’s something in the body. [Art] is a language, there’s a universal thing of ‘I see my humanity mirrored in you’,” says Ndlovu.

Ndaba echoes this sentiment: “We are creating these mirrors: you see yourself through somebody else.”

Who is art not for, then? asks Ndlovu. “Who does not need to grieve? This is what we are doing when we dance, when we make theatre, when we write, when we perform, [we are] channelling and facilitating and creating rituals,” she says.

Art is a way of deconstructing and rebuilding belief, and of telling stories that connect people in meaningful ways for both artist and audience.

“The authenticity and honesty of the performance are what engages the audience. And honesty and integrity come from the artists first. If they’re invested, they become generous in wanting to share that,” says Debbie Turner, the CEO of Cape Town City Ballet.

“I [want] to instil a little rebellion in the person watching the work that I make, because I think rebellion is good. One should never be complacent with the situation. And if you don’t question your reality and everything that is happening around you, what are you doing?” says actor Mark Antony Dobson.

Keeping the lights on

But for the connections to still be made, for such rebuilding to take place and for the hopes of South African culture practitioners to be realised, the state – and the struggles – of the industry needs to be addressed.

“When I look at other countries and see [how they] support the arts, even if it’s not from the national level, independent theatres and production companies get some kind of support from the city or the province. And it’s been absolutely impossible to keep our heads above water without the funding that is necessary.

“We are just not supported at all, it’s absolutely impossible to exist on the sales of ticket sales alone – we need so much more support,” explains Kuhn.

Faasen reminds the audience that art and culture is a worthwhile investment – not just on an entertainment level but as a way of combating poverty and unemployment.

“The arts in this country is such a major escape from poverty. Because people can do this often without formal training, it’s something they can start doing as soon as they leave school.

“There’s a massive group of young people in this country who rely on the arts as an escape… That element, it’s like it’s non-existent for our government,” she says.

“And the fact that our government does not acknowledge or even realise that, it’s actually really tragic.”

This is not, however, a situation unique to the pandemic, but rather one that has plagued the industry for years.

But what the pandemic has done – as with other aspects of our social construct – is shine a light on the industry’s vulnerabilities, its failings and its challenges. Thus, while undoubtedly still devastating, Covid-19 perhaps serves as a necessary “wake-up call”, says Gregory Maqoma, chairperson of STAND.

“The situation that we find ourselves in presently, I think it needed to happen, particularly for artists. I think we’ve been so complacent and accepting that things were okay because we were just surviving and getting along.

“The reality of us having to be isolated and not having an opportunity to be on stage and not having the opportunity to earn a living really made us be aware of how fragile our industry has always been, but we just never took notice of it. It really made us rise to the top of it and see the real picture of our country within our arts and our creative space,” he adds.

In a few instances, the lockdown allowed artists and creatives to take the time to hone their crafts.

“Before Covid, I was very much like, ‘Go, go, go; hustle, hustle; grind, grind; do, do,’ ” says actor Nancy Sekhokoane. During lockdown, she instead had the opportunity to work on her skills and improve “the foundational things”, she explains.

“When it comes to tools, [it’s] the workshops that I was able to sit down and actually watch, for my body and my mind to digest the things that people put out was so refreshing and very helpful for me.”

For stand-up comedian Alan Committie, the pandemic has highlighted how important it is to go back to basics, reconnecting with what art is really about.

And we can see how important art and culture is, even outside of a professional space, but for humanity as a whole. As lockdown forced people inside, many turned to the arts as a way to cope with isolation, pass the time by learning new skills or focus on something positive.

“What I saw was not necessarily just creatives creating stuff, but everyday people realised the power in creativity and in art and then those tools that were accessible to a lot of people. Escapism was also this thing that people were yearning for, and where did they find it mostly? In the arts. So, hopefully, people are realising it is important,” says writer and actor Alberto Smit.

Looking forward, we are not out of the woods, not even close. But there are silver linings. As Ndlovu says, “You have kids whose creativity is in high-speed production”, and young arts and culture practitioners are still looking to build their careers in the industry. There is perhaps hope.

“As long as you are still giving birth to people, the arts will always be there, because that person will start a brand new story of their life,” says Ndaba.

For young artists to succeed, Dobson believes that there are several things that need to be in place, such as mentorship and better access to information that could help them build their careers.

My dad, the pandemic and grief that comes from never saying goodbye