The practical difference between . . . risk and uncertainty . . . is that in the former the distribution of the outcome in a group of instances is known . . . while in the case of uncertainty, this is not true . . . because the situation dealt with is in high degree unique. —Frank H. Knight, Risk, Uncertainty, and Profit

In 1979, Daniel Kahneman and Amos Tversky outlined prospect theory, which identifies economic behaviours that are inconsistent with rational decision making. Their theoretical take on probabilities and expectations could well prove relevant today in assessing the likelihood of historically low government bond yields being subject to potentially asymmetric outcomes.

One of the most significant insights from their theory is that people exhibit a significant aversion to losses when making choices between risky outcomes, no matter how small the stakes. Kahneman and Tversky found that a loss has about two and a half times the “utility impact” of a gain of the same magnitude. In other words, people feel significantly worse about losses of a given magnitude than they feel good about a gain of similar magnitude.

This behavioural fact means that people are a lot happier when they are right frequently. Interestingly, being right frequently is not necessarily consistent with the actual outcomes of an investment portfolio that ultimately outperforms its benchmark. Moreover, trying to be right frequently often means that investors anchor themselves to consensus thinking, in the mistaken belief that “collective intelligence” is more likely to get things right.

This point is worth emphasising and is a great lesson inherent in any probabilistic exercise:

Consider the following example that considers the fortunes of a hypothetical sovereign bond market over the next year. Assume that only one of two “events” will materialise – the bond market could go either up or down, and the associated market consensus-based probabilities for each event are shown. Also shown are the outcomes (price appreciation/depreciation) and the expected values of the two respective events.

In this example, the most probable event is that the bond market goes up, a view held by 70% of market participants. Importantly, however, the expected value of the event as a whole is negative because the price reaction of the two potential outcomes is asymmetric.

Because the consensus-based probability that the “bond market will go up” is so dominant, this collective view bids bond prices up and diminishes the future return prospects of that event, even if the view turns out to be correct.

Conversely, the view that the “bond market goes down” is such a non-consensus view that should that event materialise, the adverse price reaction will be particularly dramatic and painful – and it is this asymmetric price return profile that ultimately sways the expected value of the event as whole towards the bond market making a loss over the next year.

These yields have been on a multi-decade secular bull trend, with 10-year bond yields registering a meagre 1.2% in the US, 0.079% in Japan and -0.40% a year in Germany at the time of writing. Low developed market sovereign bond yields currently encapsulate a potentially worrisome cocktail of low income, diminished room for yield compression, high duration and, taking all of these into account, high downside asymmetries.

There has been a secular downtrend in sovereign developed market bond yields since the early 1980s.  The economic context of Paul Volcker’s appointment as chairman of the Federal Reserve was one of high inflation and financial instability, as a consequence of the first (1973) and second (1979) oil price shocks. Ever since Volcker’s somewhat radical policy response, and the subsequent advent of inflation-targeting in the 1990s, global central banks have gradually immunised economies against runaway prices.

Following the Great Financial Crisis, central banks in developed economies adopted a range of measures to influence monetary and financial conditions. The measures have gone far beyond the pre-crisis typical mode of operation, whereby a central bank affects financial conditions by setting, or closely controlling, a short-term rate (often overnight) and by steering expectations about where it will be set in future (“interest rate forward guidance”).

“Unconventional” monetary policy, as it has been termed, includes but has not been limited to large-scale asset purchases (which influenced the entire term structure of yields) and the supply of central bank funding (“liquidity”) at non-standard terms and conditions (e.g. at long maturities, for specific lending purposes). In some sense, unconventional monetary policy ushered in central banks as a class of “price agnostic” buyers of sovereign debt, ultimately driving yields across the term structure lower.

Although academics and practitioners have presented a range of explanations for this, the reasons above generally feature prominently in accounts of what drove the downward trend in global developed market yields roughly over the past 40 years.

In fixed income analytics, duration (and its technical correlates, such as “modified duration” and “effective duration”) is a standard and ubiquitous measure of the price sensitivity of a bond to change in yield. Bond prices and yields are inversely related.

Using the US 10-year bond as a case in point, its modified duration at present is close to a 20-year high, while its current yield is close to a 20-year low. The same picture emerges from global sovereign bond aggregate indices. Given depressed yields across the term structure, sovereign debt issuers worldwide have tilted sales toward longer maturities. With coupon rates low, modified duration measures have recently registered multi-year highs.

Hopefully, with these characterisations of sovereign developed market bond yields, the expected values analogy introduced in the opening paragraphs are valid currently:

Sovereign developed market bond yields have compressed in an almost predictable fashion over the past 20 years, such that market consensus-based probabilities show that the prospect of rising long-term yields is low, but the price reaction of such an event (given their multi-year high duration) could be very consequential – almost precisely the dynamics we outlined in the hypothetical example in the beginning. It suggests that low probability events could still be very significant if their associated “payoffs” were very meaningful. 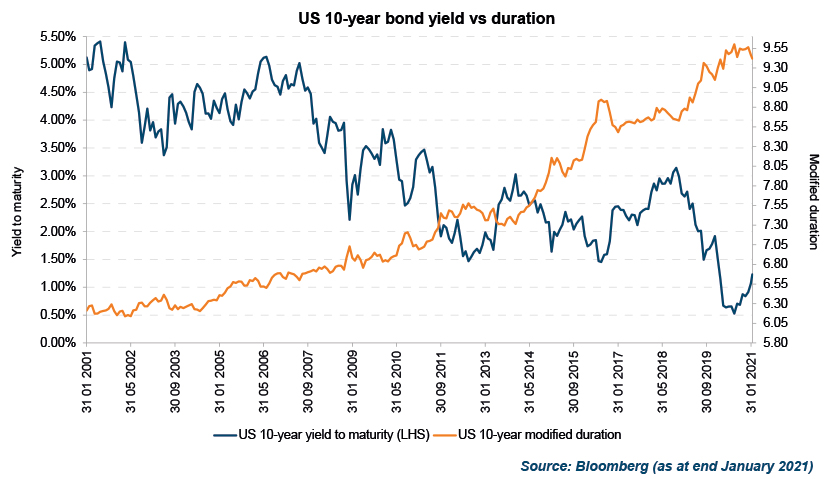 Modestly rising yields have meant that the Bloomberg Barclays Global Aggregate Treasury Index returns have moved into negative territory in 2021, with its duration holding just below a record high. Given that level and the roughly $35 trillion pile of bonds the index tracks, each percentage-point increase in yield would mean about $3 trillion of losses.

For sovereign developed markets, rising bond yields from these historically low levels would almost certainly be based on increasing inflation-expectations.  As we mentioned, these expectations themselves have been downwardly adjusted over several years of successful inflation-targeting policy action. They have also been influenced by demographics, technological change, and the cost efficiencies from the free flow of goods, services, and capital across borders.

With the onset of Covid-19, inflationary expectations were decimated, with significant reductions in real economic activity and aggregate demand globally. With economies re-emerging from very restrictive containment measures, real economic activity (particularly in the US and China) is gaining traction. This traction ultimately influences market-based measures of inflation.

With aggregate global investor positioning in sovereign developed bonds substantial, we can only hope that holders pay attention to probabilities and expected values, for as we have shown, the negative asymmetry embedded in these yields at current levels could be a significant cause for concern! DM/BM

This article was written by By Reza Ismail, Head of Bonds at Prescient Investment Management