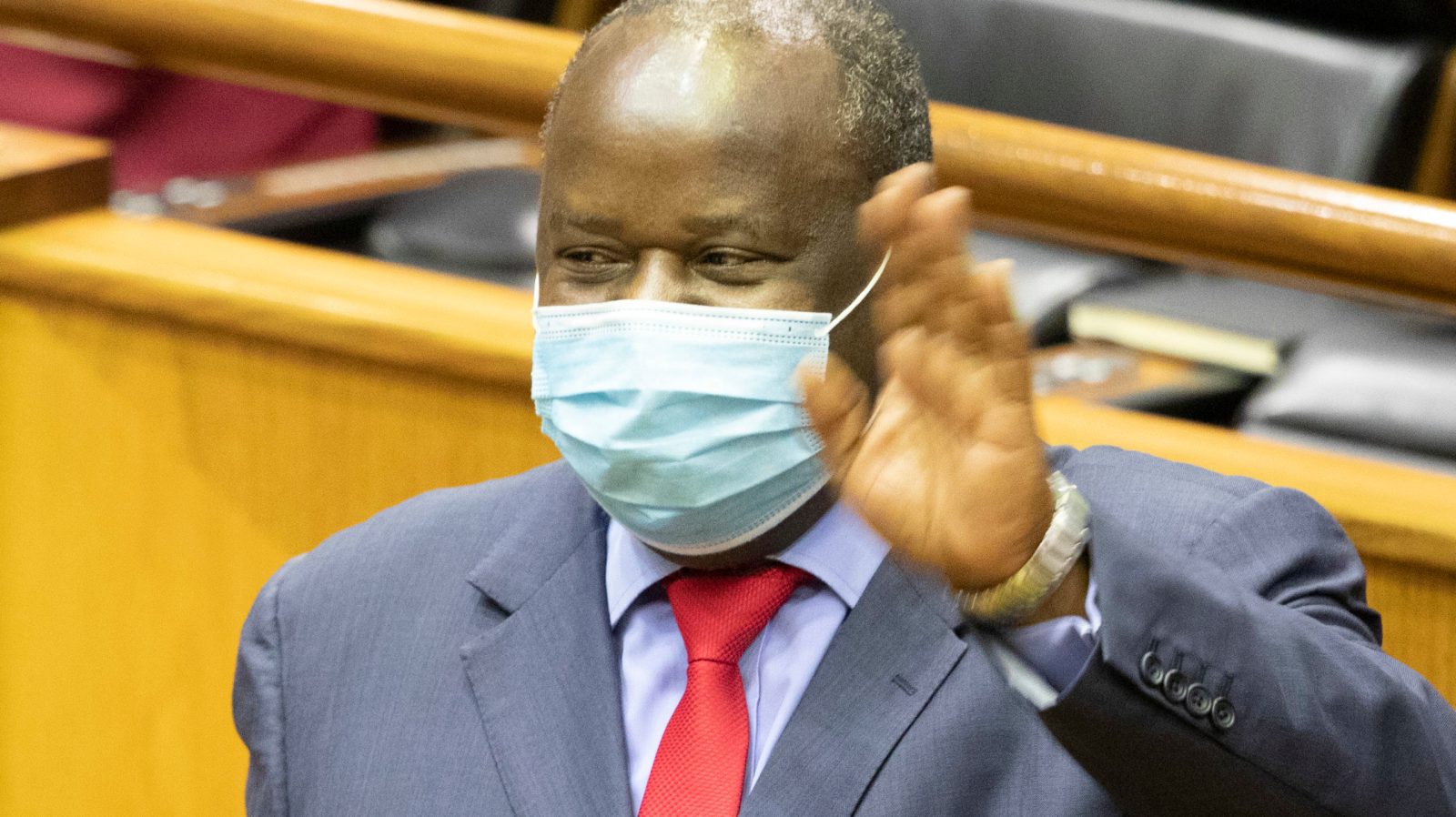 Finance Minister Tito Mboweni prior to delivering his Budget Speech on Wednesday 24 February 2021. The minister focused on the financial implications of fighting the Covid-19 outbreak and South Africa's ballooning debt. (Photo: Leila Dougan)

Under the theme of supporting public health and repairing public finances, the 2021 Budget shifts numbers across the balance sheet to make it look good. But it’s a case of robbing Peter to pay Paul – dependent on the assumption of no real increases in the public wage bill.

Also on the losing side of the R2.02-trillion Budget 2021 are provinces and municipalities. Provinces lose R58.3-billion in the 2021 financial year and R83.5-billion the next year, while local government loses R20.2-billion over the next three years.

At the municipal front, the Budget Review document argues the cuts are from non-performing programmes. For example, R1.9-billion are cut from the public transport network grant “because only six of the 13 cities receiving the grants have successfully launched public transportation”.

This is part of an overall R264.9-billion in expenditure cuts over the next three years across government to facilitate spending on Covid-19 vaccines (R9-billion) and mass public employment programmes (R11-billion).

Crucially on the Covid-19 vaccines, in 2021 immediately available is R5.85-billion – R4.35-billion for the national Health Department, and R1.5-billion for its provincial counterparts.

Because of financial and pandemic uncertainties, the Budget Review outlines how government’s contingency has been increased to R12-billion to provide a safety net.

But all this is based on the assumption the public wage bill for 1.3 million civil servants will not increase. The Budget Review factors in a 1.2% annual rise in each of the next three years, effectively to accommodate rising contributions to benefits like medical aid and pension.

The Budget also includes the assumption that government will not be ordered to repay the R37-billion it saved by not implementing the above-inflation increases in 2020, the third and final year of the wage deal. In 2020, the public wage bill accounted for 47% of revenue, according to the Budget Review.

The matter remains before court as the trade unions are appealing the December 2020 Labour Appeal Court finding in favour of government. And while this remains an uncertainty, the start of negotiations for the next three-year salary settlement is set to begin within a couple of months.

“Government will negotiate on the basis of fairness, equity and affordability. A pact that exceeds budgeted amounts would present a risk to the fiscal framework,” says the Budget Review.

Such a firm, non-inflationary stance on the public wage bill – a potential political pickle, particularly in an election year even if it is for local government.

If that line on the public wage bill is not held, effectively the 2021 Budget falls off the razor’s edge.

That means debt repayment costs average 20.9% of tax revenue. Put differently: R269.7-billion goes to repay debt in 2021, rather than towards productive investment and spending for economic growth. By 2024 that debt service cost would stand at R338.6-billion.

Still Finance Minister Tito Mboweni turned to hope, having ditched the hardy aloe. “Today I want to leave you hopeful and outline how we will leave this economy in better shape for those who come after us.”

Determined to provide a narrative of progress, the Budget Review highlights how the debt to GDP ratios remained better than the 93% forecast as recently as the October 2020 Medium-Term Budget Policy Statement (MTBPS).

Of the R2.02-trillion 2021 Budget, the majority goes to social services, with learning and culture receiving the lion’s share at R402.9-billion, followed by social development at R335.3-billion and health at R248.8-billion.

Peace and security in 2021 is allocated R208,6-billion of which the SAPS get just over half, or R104.6-billion. Economic development, which covers infrastructure, job creation and industrialisation, receives R207.5-billion.

The Budget Review acknowledges “public finances remain under severe strain”, but the balancing act received a bit of a boost from improved revenue collection.

The shortfall of R213.2-billion is R99.6-billion less than initially anticipated – and the total R1.365-trillion revenue collected has given National Treasury some room to manoeuvre on the spending side.

For taxpayers that means the taxation hikes indicated in the 2020 October MTBPS have been put on ice. And by allowing for bracket creep, personal income taxpayers are set to keep R2.2-billion in their pockets.

Excise taxes for alcohol and tobacco products increase by 8%, well over double the 3.3% rate of inflation in 2020. The Budget Review draws parallels to the role of tax in public health, “In South Africa, recent studies have shown the harm generated by alcohol in society… and the effect on public health… when alcohol sales were restricted”.

But the additional R99.6-billion revenue collection has also allowed wiggle room to give the Land Bank the R7-billion it requested to balance its books. It’s staggered, and with conditions, with the first tranche of R5-billion in 2021, followed by transfers of R1-billion for each of the following two years.

But the revenue collection boos has also assisted efforts to match money to government priorities as President Cyril Ramaphosa outlines in his 11 February State of the Nation Address (SONA).

Mass public employment programmes get R11-billion as the Budget Review points to the 430,000 job opportunities already created by the end January 2021.

The importance of the Unemployment Insurance Fund (UIF) employee/employer relief scheme (TERS) that Budget 2021 continues to support is highlighted to support that initiative’s continuation: by end January 2021, 13.9-million workers affected by the Covid-19 lockdown restrictions had received R57.3-billion.

That this support is crucial became evident on Tuesday when on the eve of Budget Statistics South Africa posted an increase of joblessness to 42.6% on the broad definition that includes those too disheartened to even try looking for work.

National Treasury Director-General Dondo Mogajane described the 2021 Budget as an “exceptionally difficult” balancing in the foreword to the Budget Review.

“On this razor’s edge, the 2021 Budget Review looks straight ahead… The 2021 Budget shows some progress: we are doing what we set out to do.” DM