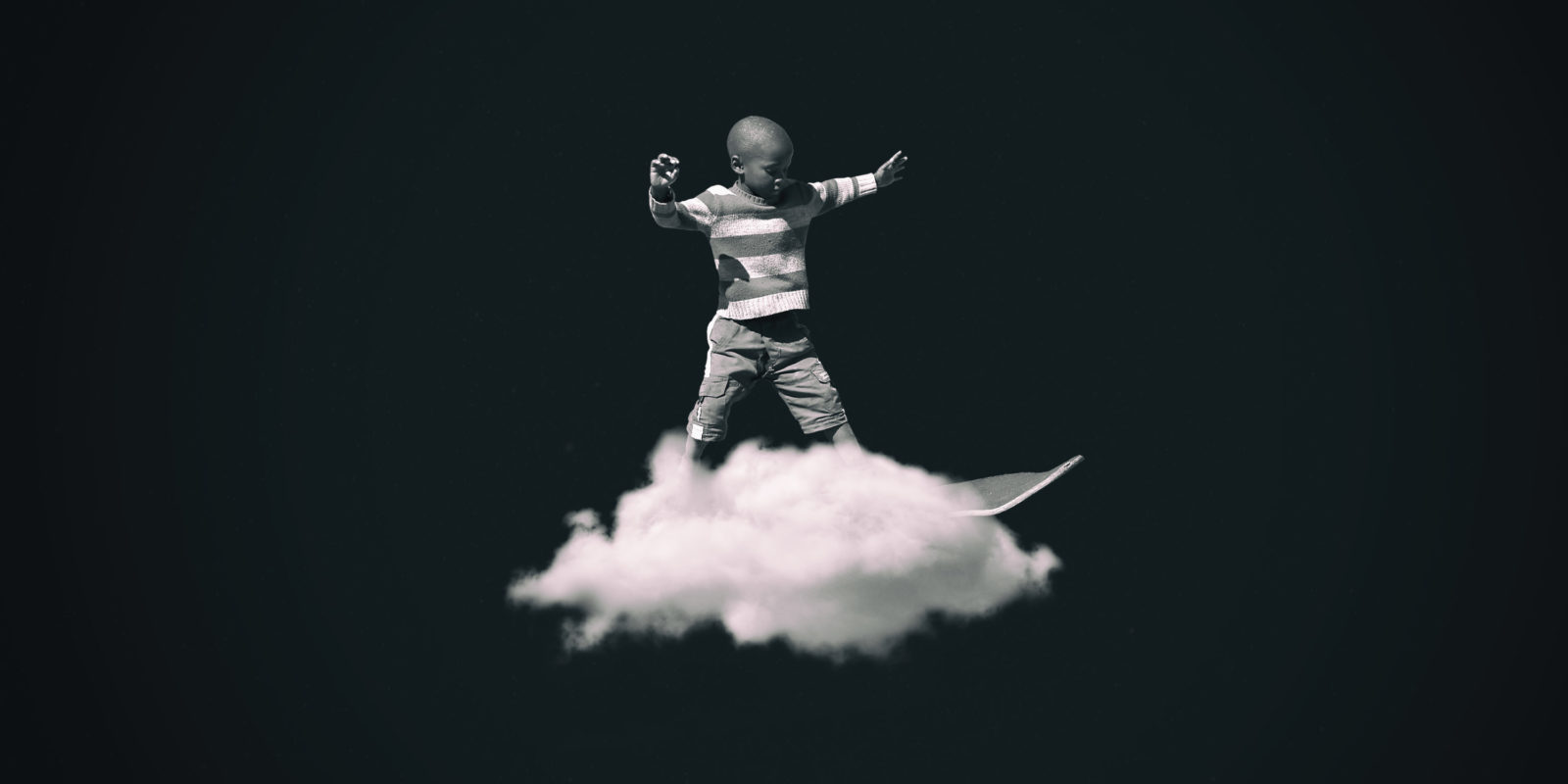 The ship is now, of course, listing heavily, and there is a real sense that we might be going down.

Towards the end of 2020, UN Secretary-General António Guterres said: “To put it simply, the state of the planet is broken. Dear friends, humanity is waging war on nature. This is suicidal.”

Being optimistic about the future is often what gets us through bad times – in short, keeping a positive outlook is essential for our sanity. But when there is clearly so much wrong with the world, it’s hard to be consistently of good cheer.

Especially if, like me, you tend to be a compulsive doomscroller and someone who is preoccupied with the great environmental issues of our time. It’s all a whopping burden on our collective psyche as we and our companion creatures and plants hurtle around the sun on this big beautiful rock. And the duo of Covid and Donald Trump hasn’t helped. At least we seem to be rid of the latter (for a while, at least).

The one thing Covid has done, however, apart from globally wreaking personal and economic misery, is that it has prompted us to reassess our lives and, especially, our relationship with nature. There has to be a better way of running the planet, we say as we grapple with this more urgently than ever before. We need a “paradigm shift”.

Indeed, we’ve been given a harsh lesson. If we look after the natural world, we get a lot back that is positive. But when we don’t, we still get a lot back, but in ways that make our lives a lot less comfortable: wildfires, huge city-flattening storms, floods, heatwaves, sudden, massive sub-zero weather cells, and polar ice that gets thinner and thinner with each passing year. And, of course, zoonotic disease.

We’ve known all this was happening for at least the past 50 years. In the European summer of 1972, the nations of the world assembled in Stockholm. That in itself was nothing remarkable as global conferences were rapidly becoming the order of the day. What distinguished this meeting was that for the very first time, the environment held centre stage. Its outcome was the Stockholm Declaration. And it marked the start of a dialogue between rich industrialised countries and the developing world on the link between economic growth, the pollution of the air, water, and oceans, and the well-being of people around the world. The United Nations Environment Programme (Unep) had been kickstarted into existence.

Back then, the world as we knew it had begun to take on water, the ship was sinking, but slowly enough not to be immediately noticed other than by a small group of scientists and concerned citizens. The party on board was in full swing, and nothing was going to stop it. Not then, or any time since. The warnings of environmentalists grew ever more strident, but the band played on. Until very recently, that is.

The ship is now, of course, listing heavily, and there is a real sense that we might be going down. And the fact that we face this dire situation has to be the single greatest failure of all time by business and political leaders worldwide. For 50 years on the trot, selfish interests, greed, and short-termism have drowned out any sense of moral responsibility.

The report is aptly titled Making Peace with Nature, and indeed, this is the defining task of the 21st century. Although much of the responsibility for this lies with governments and businesses, constant prompting by civil society will also be crucial. And each one of us will have to play our part as well.

Why suddenly, now, does it seem that the global GDP-fixated machine is finally taking notice? To my mind, the answer is simple: Covid-19. The pandemic struck quickly and silently and took sudden hold, not in the poor countries but the rich ones of Europe, North America, and the East. This made the personal tragedies of the victims and their families no less awful. Still, I have no doubt that had the disease predominantly taken hold only in the developing world, the rush to find a cure would have been a far less galvanizing event. And, despite assurances to the contrary, it is the citizenry of the rich countries who will have their shots ahead of the great unwashed. Sadly, as has already happened in South Africa, the delivery of vaccinations and protective equipment to the developing world is already tangled in the web of incompetence and corruption.

Certainly, it is the case that the burden of natural and human-induced disasters falls disproportionately on the most vulnerable – those living in extreme poverty. It has always been thus.

If we look back over time, the record shows that only a small elite lived in conditions of plenty. The vast majority existed in a state of dire need, what we today describe as extreme poverty. Now it often seems that the whole world, other than the G20 nations, is still mired in abject poverty. (Even within that august group, the picture is not always rosy. Take South Africa, for example; although it is part of the G20, it also has the dubious status as the world’s most unequal economy.)

However, if we dig a bit deeper, it becomes apparent that great strides have been made regarding poverty. In fact, since the Industrial Revolution, poverty has decreased steadily over two centuries. Yet, from 1900 through to the early 1950s, things weren’t looking that hopeful because population growth was outstripping the decrease in poverty rates. But around 1970 came a drop in poverty rates so steep that the absolute number of very poor people began to fall as well. And the trend has continued. Surely, we can count this as one of humanity’s most outstanding achievements?

Yes, we can, but lest we become too self-congratulatory, some caution is required. The global extreme poverty rate fell to 9.2% in 2017, from 10.1% in 2015. But that is still equivalent to 689 million people living on less than $1.90 a day. And poverty doesn’t magically disappear above that line. After all, in 2017, we still had 24.1% of the world living on less than $3.20 a day and a massive 43.6% – nearly half the global population – living on less than $5.50 a day. That’s less than the cost of a Big Mac in much of the developed world. Even more sobering is that, due to Covid, the quest to end poverty has suffered a severe setback for the first time in a generation.

Even the small gains we can claim in eradicating poverty have come alongside an appalling cost to the planet. Over the past 50 years, the human population has more than doubled. And the extraction of materials and the production of primary energy and food have all more than tripled. The global economy has grown nearly fivefold, while trade has increased tenfold. We are living well beyond the ability of our planet to cope.

For human beings to thrive, we have to learn to do so within the context of a thriving planet. Never has this been clearer, and Unep’s timely new report offers a blueprint for the sustainable world we need and how to tackle, not only poverty, but also the three planetary crises of climate change, biodiversity loss, and pollution.

The report is aptly titled Making Peace with Nature, and indeed, this is the defining task of the 21st century. Although much of the responsibility for this lies with governments and businesses, constant prompting by civil society will also be crucial. And each one of us will have to play our part as well.

As the economist Partha Dasgupta says in his remarkable review: “…ultimately, we each have to serve as judge and jury for our own actions. And that cannot happen unless we develop an affection for Nature and its processes. As that affection can flourish only if we each develop an appreciation of Nature’s workings, the monograph ends with a plea that our education systems should introduce Nature studies from the earliest stages of our lives, and revisit them in the years we spend in secondary and tertiary education. The conclusion we should draw from this is unmistakable: if we care about our common future and the common future of our descendants, we should all in part be naturalists.” DM

Peter Borchert is an independent commentator, publisher and conservationist. He is the founder and publisher of Africa Geographic magazine, and has authored five natural history books. He is the honorary chairman and editor-in-chief of the Shannon Elizabeth Foundation and is co-host of SA’s top-rated nature podcast, www.artofconservation.com

Using emergency powerships to solve the energy crisis sounds like a great idea, so what’s the problem with the Karpowerships?

They know the drill: Gift of the Givers steps up to sink boreholes for battling Joburg hospitals