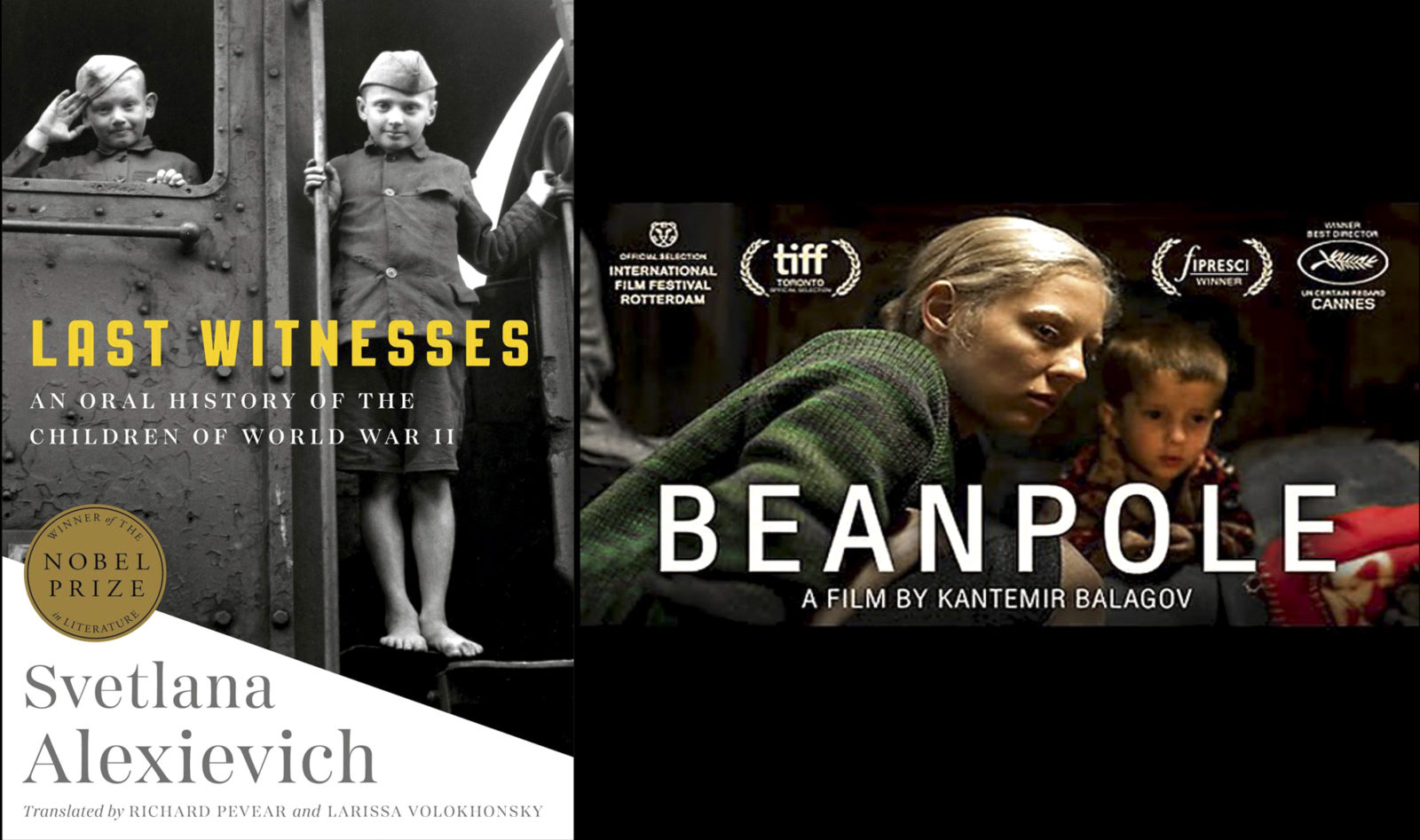 Some of you may have enjoyed the selection of poems that appeared last year in “Unlocked: Poems for Critical Times.” Ingrid de Kok and Mark Heywood now turn to what South African writers have been reading during the bleak and tense months Covid-19 has visited upon us.

Anecdotal evidence suggests that, locked down, locked in, more people have had time to read more books than ever before. Many booklovers, passionate about their own favourite books, are curious to know what writers have been reading during this lonely period. What was already on their shelves; what did they borrow, buy or read online?

In this series, Reading in the present tense, a range of writers and other creative artists reflect on texts that moved them, intellectually engaged them, frightened them or made them laugh. The chosen text can be something recently published or a cherished book re-read with a fresh perspective. It can be a book written at any time, from any country and in any language if also translated into English.

Once a week a short review by established, as well as younger writers, will appear in Maverick Citizen/Maverick Life. The first four reviews will be by Imraan Coovadia, Neo Muyanga, Jemma Kahn and Rustum Kozain.

We are proud to begin the series this week with a review by Imraan Coovadia in which he considers Beanpole (dir: Kantemir Balagov, 2019) and Last Witnesses (Svetlana Alexievich, first published 1984; recent translated version, Random House 2020).

“Pashka, a dog. Be a dog. What does a dog do?” In Kantemir Balagov’s Beanpole, the young boy, Pasha, is entertaining a ward of invalid soldiers in a Soviet hospital in 1945, some months after the conclusion of a war which is printed in their grievous injuries, their amputated limbs and burned bodies, and most of all and forever in their hearts and minds.

“Pashka, be a dog.” Pasha is willing to play along, as good children are with adults, but uncertainty shows in his expression. It takes a minute for the penny to drop. One of the soldiers figures it out:

“Where would he have seen a dog? They’ve all been eaten.”

In the last year people have suffered apart, but we’ve known and felt that in certain ways we are all suffering together. The representation of great individual and collective suffering is the special province of Russian literature and film. Balagov, a Russian citizen and a member of the legendary Circassian minority, made Beanpole when he was in his twenties and it won him a Best Director award at Cannes in 2019.

He already had a reputation for controversy. His first film, Closeness, examined the Jewish community in his hometown after a kidnapping which included actual footage of the killing of Russian soldiers by Chechen guerrillas in Dagestan in 1999.

For Closeness, Balagov cites the Dardenne brothers as principal inspiration although, to my mind, the film lacks the gentle intelligence, Chekhov’s kind of intelligence, with which Luc and Jean-Pierre Dardenne have pictured their corner of working-class Belgium in films like The Promise and The Kid With a Bike.

In the case of Beanpole, Balagov and his collaborator, Aleksandr Terekhov, drew on Svetlana Alexievich’s oral history of Soviet women in combat, The Unwomanly Face of War, although the film is not a direct translation. Alexievich’s book was composed in 1983 but it is only with a wave of new translations, along with her receiving the 2015 Nobel Prize, that the force of her writing has been felt in English.

Alexievich’s investigations range from the memories of Russian children under German occupation to the account of soldiers of the Soviet adventure in Afghanistan and the short lives and long deaths of the men sent to bring the reactor at Chernobyl under control.

About her method she says that “I’ve been searching for a literary method that would allow the closest possible approximation to real life. Reality has always attracted me like a magnet, it tortured and hypnotized me, I wanted to capture it on paper.”

It would be natural to suppose that Alexievich’s writing is a fulfillment of the view, given various formulations, that the extremes of 20th century experience cannot be represented in fiction. Balagov’s great film suggests that fiction can use the same material as non-fiction to equally compelling effect.

Beanpole is the story of two women who served together in the Red Army as anti-aircraft gunners. Iya (Viktoria Miroshnichenko) is the “Beanpole”, a very tall, thin, not entirely awkward young woman working as a nurse in Leningrad in “the first autumn after the war”.

Iya has suffered a concussion during the fighting. The result is that she experiences periodic episodes of catatonia and loss of consciousness. She is taking care of the boy, Pasha, on behalf of her comrade in arms Masha (Vasilisa Perelyygina), who returns somewhat later from the Western front.

The precipitating incident of Beanpole forms a bond of love and desolation between fair-haired Iya and dark-haired Masha. Masha believes that Iya owes her a debt. The story of how she goes about getting her compensation for what she has lost has the neatness and terribleness of a fable, but one illuminated by the remarkable images and situations of individual men and women in a Leningrad which the set design recreates.

Was there a better film released last year? All the money and glamour of Hollywood couldn’t make one.

Around the same time as the film was released, the new translation of Alexievich’s Last Witnesses was published in the United States. (The translators, Richard Pevear and Larissa Volokhonsky, are the same couple who transformed the English-language versions of Tolstoy, Dostoyevsky, Gogol, Chekhov, and others.)

Last Witnesses presents Alexievich’s edited and transcribed accounts of the experiences of the generation of Soviet children who survived the four years of the German war. Their memories, relayed to Alexievich decades after the fact, show the exact truth with which children encounter the world alongside the telescopic and microscopic effects of memory.

Raya Ilyinkovskaya, 14 years old during the war, grew up to be a “teacher of logic”… “I’ll never forget the smell of the lindens in our hometown, Yelsk. During the war everything that had been before the war seemed the most beautiful in the world. That’s how it stayed with me forever. To this day.”

Zoya Mazharova, who had been 12 and grew up to be a postal worker, recalled how “we unloaded the trucks of dead people there and stacked them up in layers: a layer of dead people, a layer of tarred railway ties. One layer, another layer… and so from morning to night we prepared bonfires.

“Bonfires of… well, obviously… of corpses… I don’t know if it’s easy for a tree to live, or for all the living creatures that man has tamed. Cattle, birds… But about human beings I know everything…”

Leonid Sivakov, a toolmaker, had been only six years old when he survived a mass shooting: “For seven years… I whispered a little, but no one could make out my words. After seven years I began to pronounce one word well, then another… At the place where our cottage had been, grandfather gathered bones in a basket… The basket wasn’t even full… So I’ve told you… Is that all? All that’s left of such horror? A few dozen words…”

Vera Zhdan, then 14 years old, complained “I’m afraid of men… I have been ever since the war.” She remembered the good humour of the German soldiers who executed her father and brother: “They stood there… All young men, good looking… smiling… It’s not the dead, but these living ones I’m afraid of. Ever since then I’ve been afraid of young men… I never married. Never knew love. I was afraid: what if I give birth to a boy…”

In a year of disasters, like every year, is there a point to reading these books which emphasise our unhappiness as a species? Yes, but the question is the oldest one of aesthetics; scenes of pain, isolation, fear, and death form a great part of our attraction.

Svetlana Alexievich has been treated as every great truth-teller in history – subject to lawsuits for defamation and collective repudiation for her part in representing the deeds of Russian soldiers.

In 2020 Alexievich joined the movement for democracy in her native country, Belarus, which was known as the Coordination Council. On 9 September 2020 she reported that “men in black masks” were trying to invade her apartment.

“I have no friends and companions left in the Coordinating Council. All are in prison or have been forcibly sent into exile… First they kidnapped the country; now it’s the turn of the best among us.” She left Belarus by the end of the month.

Kantemir Balagov’s next project is adapting a video game, The Last of Us, into a pilot for HBO. DM/MC

Imraan Coovadia is the director of the writing programme at the University of Cape Town. He has written five novels, including Tales of the Metric System (2014). His most recent book, Revolution and Non-Violence in Tolstoy, Gandhi, and Mandela, was published by Oxford in 2020. His new work, The Poisoners: On South Africa’s Toxic History 1973-2020, Umuzi/Random House, will appear in September 2021.