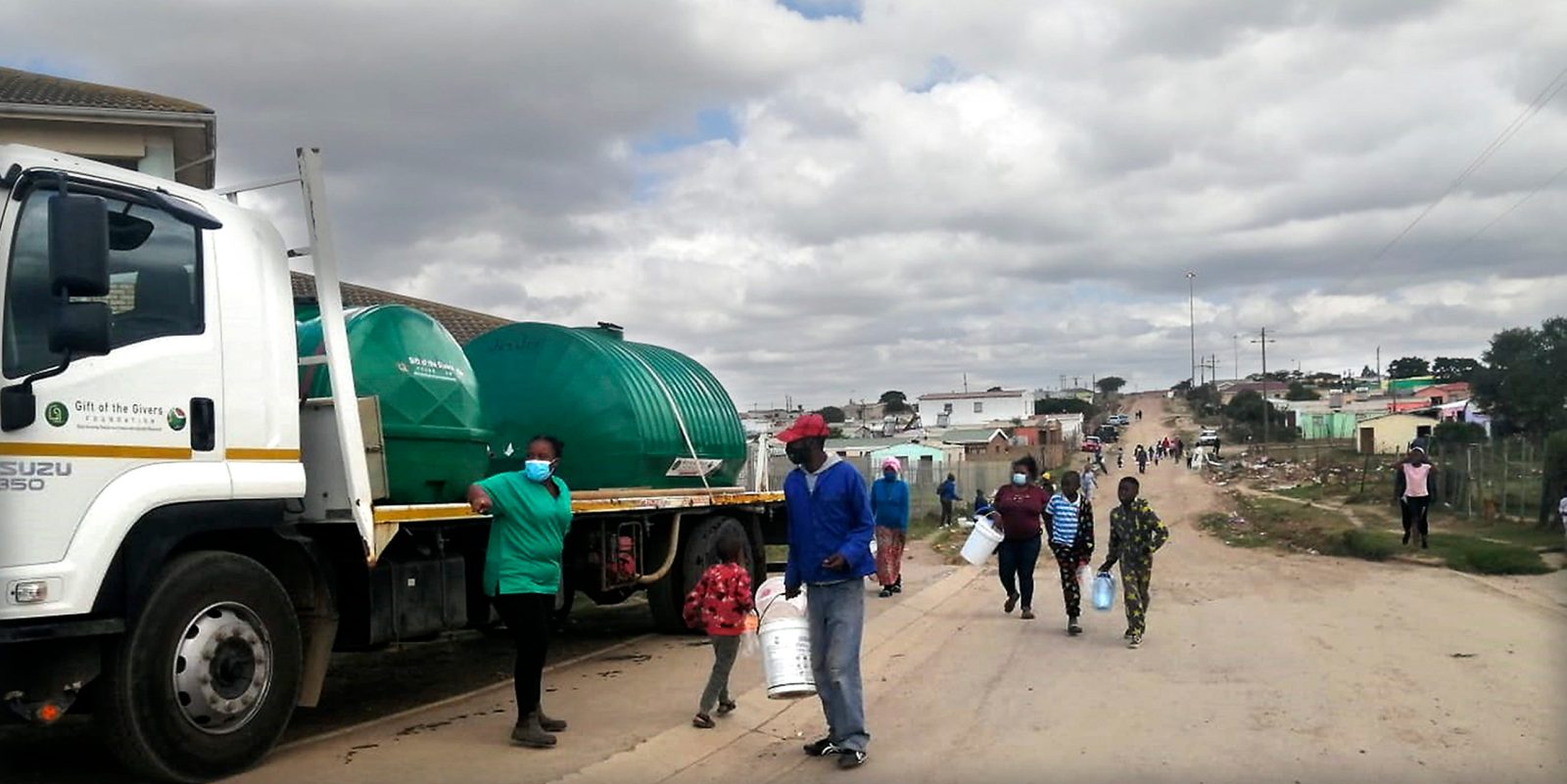 Gift of the Givers has been providing emergency water for residents of Makhanda. (Photo: Supplied)

Following a series of smaller problems since January, a disastrous failure at the James Kleynhans Water Treatment Works in Makhanda last week left its power station flooded, leaving the town with taps that have run dry.

As Makhanda entered its sixth day without water on Tuesday, 22 February, the lines at the Gift of the Givers water truck snaked along streets in Makhanda as desperate mothers and grandmothers brought buckets, milk pails and any plastic containers they could find to get some water.

After a series of smaller failures throughout January, the James Kleynhans Water Treatment works pump station in Makhanda failed after its power station was flooded when a gasket blew.

“Our team tried by all means to save the situation, but unfortunately could not win,” the municipality’s statement read.

The town has struggled with continuous water outages since the beginning of January as problems cropped up at both the James Kleynhans and the Waainek water treatment works.

Makhanda lost water supply last Tuesday and by Friday the municipality indicated it could supply water to only about 30% of the town. The rest would have to rely on water trucks.

A year ago, the Makhanda High Court ruled that the Makana Municipality, the water supply agent for the town, had to be dissolved for its unconstitutional failure to deliver services to the community. Both the municipality and the Eastern Cape Provincial Government have appealed against the ruling.

Dr Imtiaz Sooliman of Gift of the Givers said his organisation had received a number of emergency calls from the town since last week.

“The calls are pouring in from Makhanda. Gift of the Givers staff have to silence their phones temporarily to give their mental state a breather. There is desperation everywhere. People are in a panic.”

He said the Makana District Municipality, Mayor Mzukisi Mpahlwa, the councillor who heads up the municipality’s infrastructure, Rami Xonxa, community associations, businesses, residents and “just about everyone” had been calling.

“There is not a drop of water,” Sooliman said. “Even the water shops ran dry.”

Sooliman said that two years ago, on Friday, 8 February 2019, his team received similar calls and this led to Gift of the Givers’ first major intervention in Makhanda.

“Gift of the Givers water tankers have been delivering water in parts of Makhanda since 2020 from our ‘super’ borehole at Ntsika School,” said Sooliman.

“We drilled 15 boreholes in 2019 to benefit the city. Today, in terms of an emergency response, Gift of the Givers’ water tanker from Adelaide will arrive to assist our existing water tanker in Makhanda. Five JoJo tanks will accompany the water tanker and will be rendered functional immediately.

“Gift of the Givers’ drilling teams will investigate the pump failure at Waainek and look at making the seven boreholes drilled by us functional. The municipality water tanker and another one being sent by Amathole District Municipality will work in unison with Gift of the Givers’ tankers, all drawing water from Ntsika borehole, which we corrected two weeks ago with new filters and chemicals,” said Sooliman.

“We will work jointly with the municipality to research a sustainable permanent solution, all depending on cost and funding availability.”

Sooliman said they could also offer technical support if the problem was not too big.

“We have asked our drilling teams to check what type of repairs are required at the pumps. If it is not something major, we will consider repairing it at our cost. If it is something very major then the appropriate authority has to sort it out. Apparently, the pump at James Kleynhans blew and has gone for repairs. It seems a large portion of the city has been affected by that.

“What’s not clear is if Waainek is still working and if so, why are we getting calls from the whole city? Either Waainek pumping is also affected in some way or it supplies a very small portion of the city, so the damage at James Kleyhans makes a huge impact,” said Sooliman.

“Some residents have been saying they were without water for 10 days, so that’s before the pump gave up. It’s not very clear,” he said.

Ayanda Kota from the Unemployed People’s Movement said communities had been without water for a week. “We haven’t been informed what the technical reasons are. But it is what it is.”

One of the mothers who have children in school said her house had been without water for two weeks. “The children can’t bath, but they must go to school. The water truck only came after 10 pm when it was too dangerous for us to go out,” she said.

Maso Nduna from the Assumption Development Centre in the heart of the Joza Community said the water had been off for a week.

“There has been a protest. People were burning tyres. We are all frustrated. Fortunately, we have two JoJo tanks at the centre so we can help people with rainwater.

“What is happening with the water is a terrible thing,” he said.

“If you want water, you must go fetch from Gift of the Givers. We are not getting any answers about what is going on. We are very concerned.”

Community leader May Sandi said she had a rainwater tank in her backyard that she had been using for a water supply. “But I am watching it very carefully. It is half already.”

“It bothers me that we now do not have any water and yet for the past year I have been reporting a water leak right in front of my house. The municipality keeps on saying that they will send someone, but they don’t.

“Now the taps have run dry.

“Neighbours from down the street said the municipality sent a truck with water, but the water didn’t smell right. They couldn’t drink it. But at least they could flush the toilet.

“Water trucks are very scarce in our community. I saw one for the first time today. I also don’t know where the Covid-19 water tanks were installed, but it wasn’t here.

The municipality did not respond to a series of questions on the water crisis. DM/MC