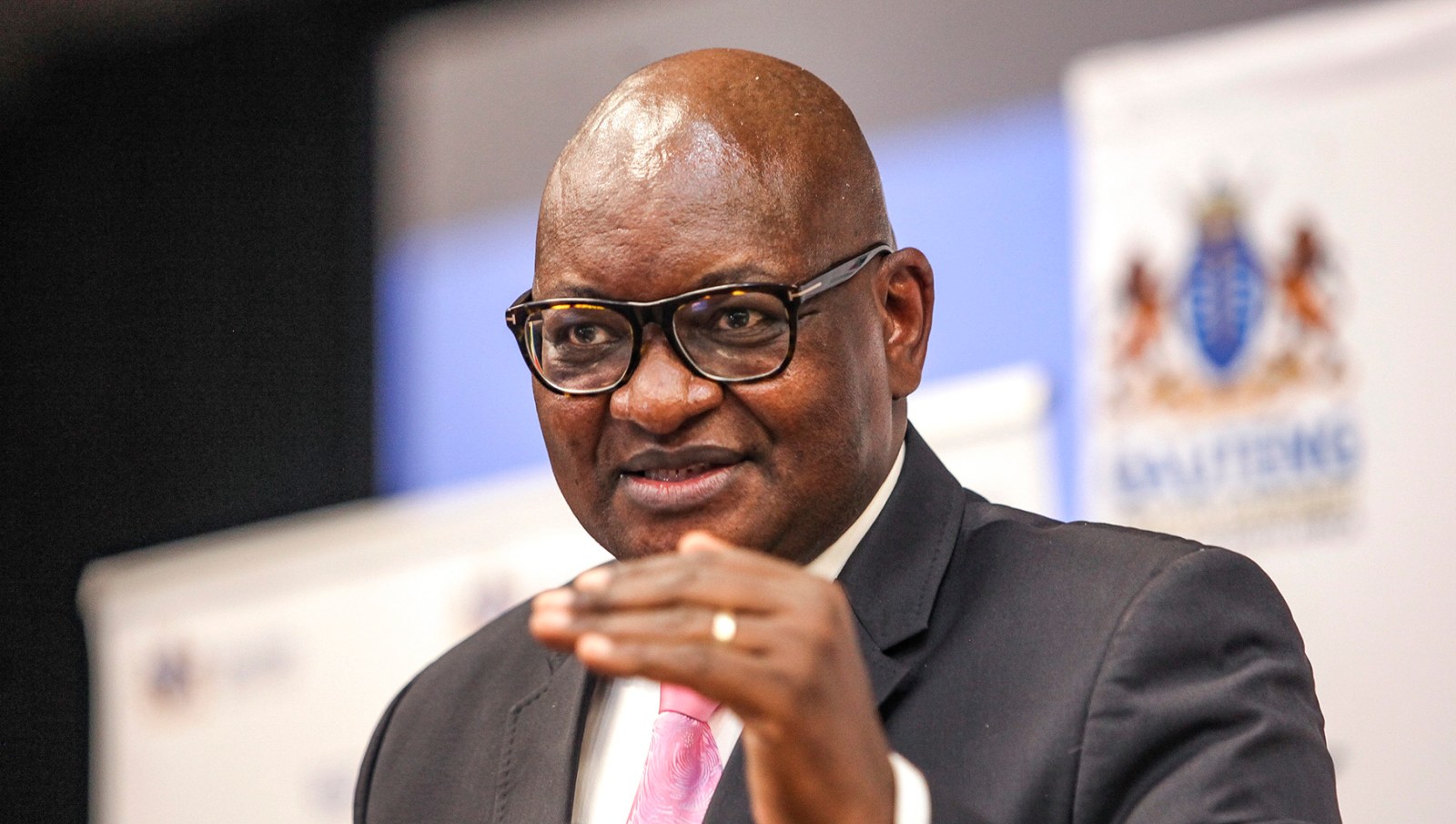 Premier David Makhura said in his 2021 state of the province address that Gauteng would focus on four priorities for the year, not least the battle against Covid-19.

On Tuesday, Gauteng Premier David Makhura began his state of the province address by quoting from Japanese writer Haruki Murakami’s book, Kafka on the Shore:

Once the storm is over, you won’t remember how you made it through, how you managed to survive. You won’t even be sure, whether the storm is really over. But one thing is certain. When you come out of the storm, you won’t be the same person who walked in. That’s what this storm’s all about.

“In Gauteng alone, over 400,000 people have contracted the coronavirus and most painfully, almost 10,000 have succumbed to Covid-19. Half-a-million jobs have been lost and 42% of small businesses were forced to close with no prospect of ever reopening,” said Makhura.

“Acknowledging pain is not to signal fatigue or accept defeat. This, simply, is to underscore the human cost of the war against the Covid-19 pandemic,” he said.

He commended all essential workers for keeping the country going despite the difficult conditions presented by the lockdown and asked those in attendance to rise in applause.

He also cautioned people not to let their guard down, saying the coronavirus was still here, particularly as we approached the third wave, expected in winter.

Speaking at the hybrid sitting of the Gauteng legislature, Makhura provided what he called an “objective conclusion” on the province’s Covid-19 response. He said the province set up adaptive and agile governance structures that provided a coordinated national, provincial and local government response.

“The work of the Gauteng Provincial Coronavirus Command Council and workstreams is informed by scientific advice, with an emphasis on data-driven and evidence-based decision-making. Close interactions and collective interventions with trade unions, business, the faith-based sector, civil society and the ward-based war rooms also helped to raise awareness in hotspots and ensure compliance,” Makhura said.

“We must and we will set an example with all those involved in malfeasance, both in the public and private sector. They must be brought to book and all monies must be recovered by the state” and that people would face jail.

“We intend to vaccinate 67% (10.4 million people) of Gauteng’s population. We call on the people of our province to get ready to vaccinate in large numbers. Vaccines save lives,” said Makhura

Makhura said that while the “Growing Gauteng Together” plan had to be adjusted, it remained central to the province’s economic plans.

“The Tshwane Automotive Special Economic Zone (Tasez) is inspiring. The three spheres of government are investing R3.3-billion in infrastructure, which has unlocked R4.3-billion investment by suppliers and a further R15.8-billion investment announced by Ford Motor Company on 8 February. This is the biggest foreign direct investment since the 2010 World Cup. Tasez will produce over 200,000 vehicles by 2022” said Makhura.

Makhura said that Tasez would work with the township of Mamelodi “providing non-financial and financial support to 262 SMMEs, Grades 1-7. Over R1.7-billion (47% of infrastructure spent) worth of SMME [is] already allocated and another R531-million of work will be allocated”.

He projected that in the next 12 months there would be 3,288 permanent jobs created as well as an additional 8,600 construction jobs with significant opportunities for women, young people and people with disabilities.

In the city of Ekurhuleni, Makhura said that the ACSA construction of the Midfield Cargo Terminal and the development of the Western Commercial Precinct were under way.

“These two developments augur well for OR Tambo International Airport as a regional hub for long-haul passenger and cargo airlines.

“Guided by the Gauteng 4IR and Digital Transformation Panel, we are rolling out several initiatives to achieve the following:

Makhura said the pandemic had forced the province to make improvements on access to services using e-platforms and that Wi-Fi hotspots in all public facilities, especially in townships, were important.

Gauteng had also identified 18 arterial roads as key integrators of provinces to move goods and services, but there were Covid-19 and bureaucratic delays to finalising infrastructure.

He said the expansion of the Gautrain was still going ahead:

“The establishment of the Gauteng Transport Authority is taking us closer to the single, integrated, inter-modal, reliable, safe and affordable public transport system across the Gauteng City Region. We will have a single ticket for all modes of transport in Gauteng by the end of this financial year,” said Makhura.

He said the commission of inquiry into taxi violence, headed by retired judge Jeremiah Shongwe, had concluded in December 2020 and had yielded useful insights, such as that the business model of the taxi industry needed to change and that the provincial executive council had given the MEC of transport the green light to implement its recommendations.

Makhura said urban land use was an important tool for spatial and economic transformation. “Since the start of the sixth administration in May 2019, we have also completed 18,154 units and 14,677 sites [for] the residents of our province. We have registered 13,789 title deeds and have formalised 52 townships.”

Makhura expressed concern at what he said was a growing occurrence of “land invasions”, particularly in the south of Gauteng where land had already been earmarked for human settlement.

He said that the Township Economic Development Bill was due to be tabled in April 2021 in the Gauteng Legislature and was emphatic that “it must be passed this year” to “nullify” by-laws criminalising small businesses in the townships and instead support the growth of businesses. He said the act would set up an “institutional and legal mandate for the creation of the Township Economy Partnership Fund” and provide “a legal framework for provincial government and municipalities to support the development of township real estate”.

Makhura acknowledged that although 660,000 jobs had been lost in the second quarter, government departments, with the infrastructure sector, had so far created 22,000 new jobs.

Makhura said that the pandemic had placed great strain on the education system, particularly on teachers, parents and learners. He thanked educators for the work they had put into the 2020 school year saying they had shown “great resolve and resilience”.

He said the department of education was continuing to invest in modernising the education system and would be paying greater attention to primary schooling and Early Childhood Development.

The pandemic had shown that three million Gauteng residents were food insecure, said Makhura and as a result, the province would be investing in community and school food gardens so people could grow their own food.

On law enforcement, Makhura said: “On Saturday, 20 February 2021, we handed over 50 high-performance vehicles fitted with cutting-edge crime-fighting technology to the SAPS as part of our commitment to fight crime. In addition, four mobile police stations are currently being manufactured and will be delivered during the first quarter of the 2021/22 financial year. We have also made a commitment to tackle gender-based violence and femicide by providing five Community Service Centres and 11 sedans prioritised as Victim Empowerment Centres. Forty-thousand households have been visited by the GBVF Brigade for psycho-social support.”

On the Gauteng governance, Makhura said: “The matter of great concern is that the financial position of many municipalities deteriorated during Covid-19 due to the loss of more than R8.75-billion in revenue between April and July 2020 in municipalities.” This, he said, negatively affected service delivery, but a multi-disciplinary team of revenue experts had been set up to attend to this.

Gauteng’s departments had received an improved clean audit report from 54% to 65%, with the rest being unqualified reports. Makhura vowed that accounting officers would answer for poor audit outcomes.

“I wish to reassure the people of Gauteng that we remain unfazed and will focus on all the four priorities outlined in this state of the province address,” concluded Makhura. DM/MC