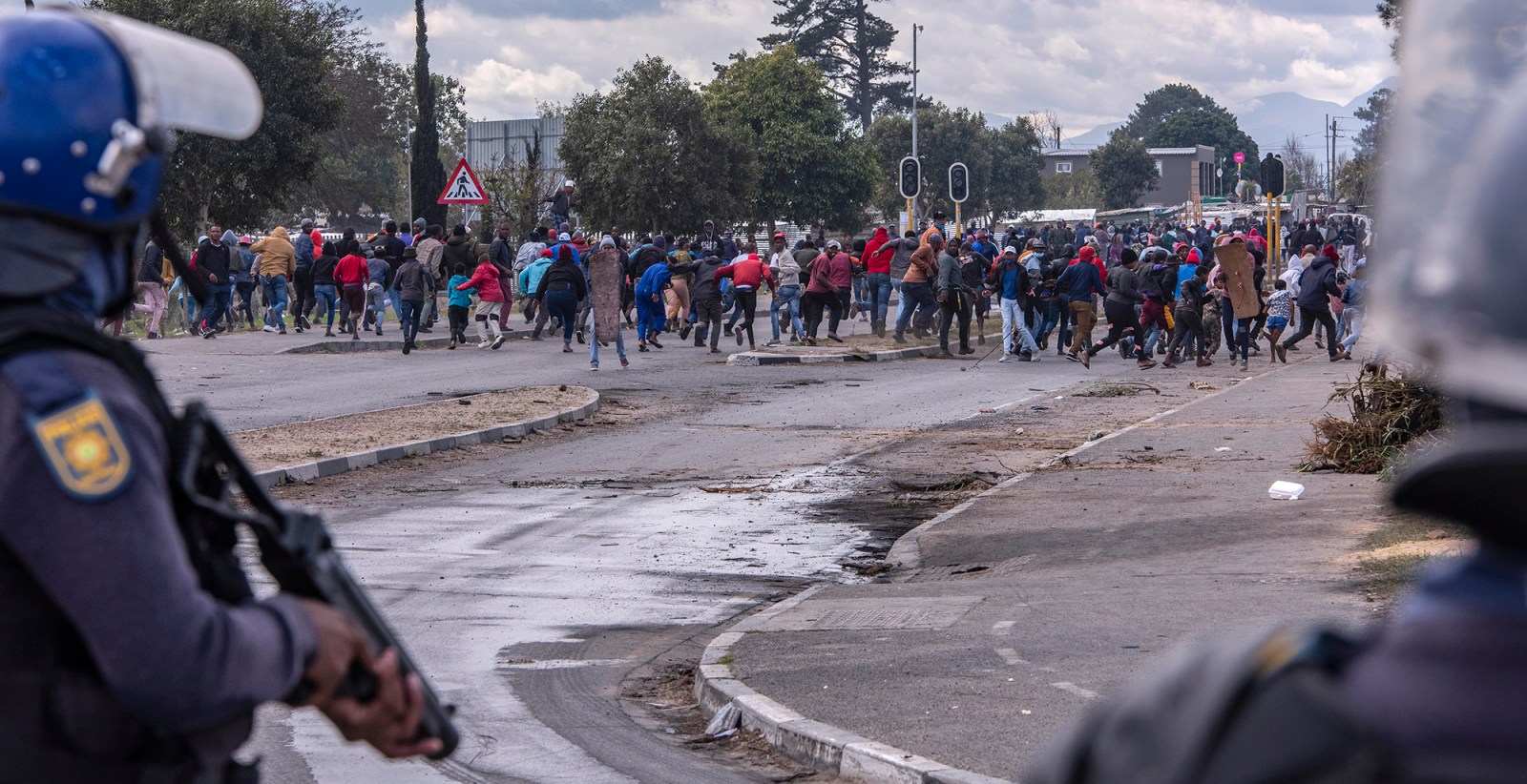 There have been several recent events in which excessive force has been used by public order units of the SAPS to disperse crowds. We need to implement the lessons of Marikana — risk management is a crucial strategy in successful public order policing.

Last month’s use of a water cannon to disperse recipients queuing for their Covid-19 social relief grants in Bellville, Cape Town, raises several key issues around the ongoing misuse of less-lethal equipment by SAPS. Among the many questions that come to mind is the extent to which proper risk identification and mitigation strategies were identified and employed preceding this use of force.

In the Bellville case, the police should have been aware that the situation was volatile. Because of Covid-19 physical distancing rules and the negative impact of the South African Social Security Agency’s (Sassa) erratic decision making on access to social grants, grant queues had become time-consuming and distressing affairs. In this instance, many of those in the queue at the Bellville Sassa offices on 15 January 2021 were seeking reinstatement of their temporary disability grants. Nerves were frayed by panic, by fear of losing their place in the queue. Anxiety over whether they would actually receive any money was also an issue — ultimately a question of whether they would be able to put any food on their own tables.

Meaningful pre-planning between the police and Sassa seems to have been absent. On the day itself, communication by the authorities, a key facet of crowd management, seemed non-existent. According to a journalist, the minister of social development was heard appealing from within a police armoured vehicle to the crowd to keep their distance while they were being forced together by the jets of water.

Risk management is a crucial strategy in successful public order policing. Deploying the principle of precaution to identify potential harm and to put in place strategies for managing these can prevent or minimise the use of weapons. Whether mitigation strategies were used, and an effort made to avoid the unnecessary use of force, should serve as the critical element in assessing the legality of the use of force. This test stands alongside our more traditional understanding of the legal test of legitimacy, proportionality and necessity.

Unfortunately, this was not an isolated incident. Less than two weeks later, and in full hindsight of these events, police used pepper spray on a crowd queuing outside an East London post office waiting for distribution of the Covid-19 social relief of distress grant. Again, Sassa had announced at short notice the termination of the grant and inevitably an anxious crowd of grantees, some of whom had travelled for kilometres, began to line up outside the distribution office.

There appeared to be no effective crowd-management techniques deployed by the police, in conjunction with the distribution agency, to enable safely distanced queuing. Added to this, the use of pepper spray carries several risks which don’t seem to have been acknowledged by the police. Pepper spray, when used against a crowd, is in effect an indiscriminate weapon. It also has potentially severe adverse health consequences.

In addition to the incidents described above, the persistent misuse of rubber bullets further demonstrates the urgency of the need for reforms. This weapon under law and regulations is permitted to be fired only “in extreme circumstances if less forceful methods have proven ineffective”. However, it repeatedly appears that the police rely on rubber bullets (which are inaccurate and have a poor safety record) as the first option, without any application of the principle of precaution.

This was strongly evident in March and April 2020, in the initial weeks of lockdown measures, and strongly evident again in the incident in late January 2021 in which nine young men, referred to as land occupiers, were shot by the police with rubber bullets, with at least two of them seriously injured by direct and close-range shots to the upper body and face.

In his 2021 State of the Nation Address, President Cyril Ramaphosa clearly articulated the intention of his government to forcefully address what is seen as a crime of land invasion. As a result, it is likely we will witness an escalation in policing responses to land occupations. Unless we invest in developing critical elements to a successful rights-based approach to public order policing, such as proper planning and risk-mitigation strategies around the use of force, these incidents will continue to repeat themselves.

We do have a starting point. Two years ago a panel of experts, appointed to examine public order policing in South Africa after the Marikana Massacre, tabled their report before the minister of police. Despite South Africans now being made to consider far-reaching amendments to the SAPS legislation and the Regulation of Gatherings Act in the amendments presented at the end of 2021, this important report remains in effect embargoed. DM

Sean Tait is Director of the African Policing Civilian Oversight Forum (APCOF) and Dr Mary Rayner is a Research Associate at the University of London. This article stems from their work with the Analysis Group of the C19 Peoples’ Coalition Anti-Repression Working Group.