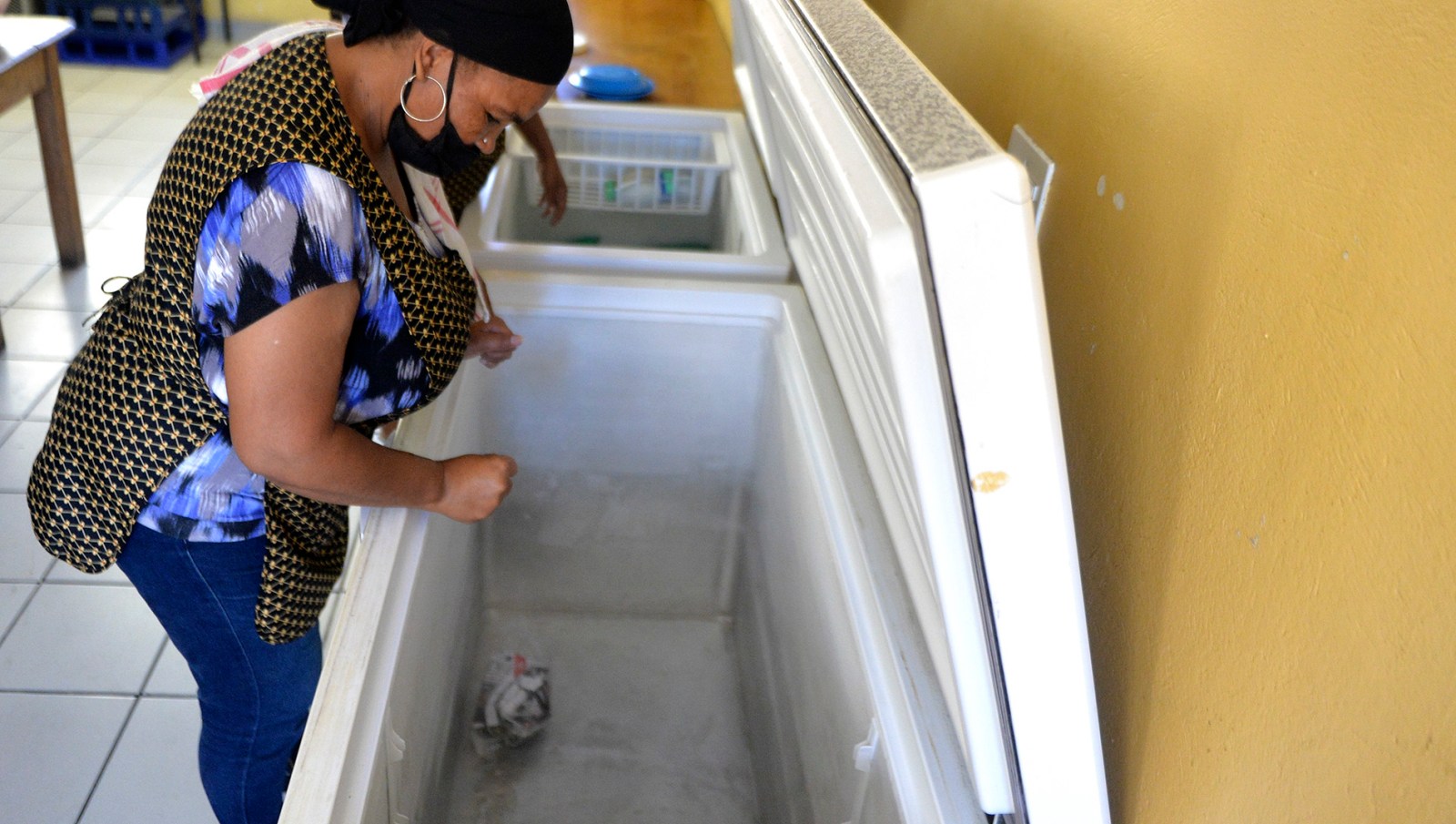 For many children at Frank Joubert Primary School in Schauderville, Port Elizabeth, their school meal on a Monday is the first substantial food they will receive after the weekend. But on Sunday, devastated staff discovered that thieves had broken into the school kitchen and not only stole all the non-perishable food, meat, bread and kettles, but also the chicken and spaghetti that had been prepared for the Monday meal. On Monday, staff members tried to keep away from the children, scared that they would ask for something to eat.

Parents, themselves with almost no food, had brought loaves of bread, some vegetables and anything they could spare to the school after the thieves cleaned out the school kitchen and freezers, getting away with the bulk of the food that was meant to feed 800 children for the next few months.

The shelves at the school kitchen have been stripped bare, as were the large freezers.

Colonel Priscilla Naidu of the SAPS confirmed that police were investigating a case of housebreaking after a window in one of the classrooms was opened and the kitchen ransacked.

“It is alleged that on Sunday, 21 February, at about 1pm, the caretaker was cleaning when he noticed that food, cables, a kettle and electrical cords were missing. On closer inspection, he discovered that one of the windows in a classroom was opened and the kitchen ransacked. A case of housebreaking is under investigation by the SAPS Gelvandale detectives. No arrest has been made,” she said.

Staff members of the Eastern Cape Department of Education were not allowed to speak to the media.

The school does not have the money to replace the stolen food as they have already used their allocated budget to buy food for the kids. It is the third time in a year that thieves have broken into the school.

It is understood that community members previously identified the thieves from CCTV footage but no arrests followed. The intruders were armed with pickaxes and spades. During the second break-in, the school’s security cameras were stolen, along with computers.

This time thieves focussed on stealing food, including the meat that was kept in deep freezes, the kettle, the dishcloths and even the school’s Wi-Fi dongle.

On Monday, as people scrambled to put food together for the children, some of the kitchen staff couldn’t bring themselves to walk past the children’s classes as they felt too sad for the hungry little ones. The most desperate of children came to knock on the kitchen door to ask for something to eat.

“This is very sad to me because education is all that these children have. It is their passport to a better life. For many of the children in the school, the meal we provide is their first meal of the day and sometimes it is the only one,” a community member said.

“We are now stuck in an evil loop with these thieves,” he added.

“The school has sadly become their target,” he said. “It is in a difficult location between the areas dominated by two gangs. It is a little bit isolated. There is a church close by, but not too many houses.

“People can come and go at the school as they please. What happened here is very sad. We are not able to organise big fundraisers at the moment.”

He said he was deeply touched by the concern of parents in the area. “First someone arrived with bread. Some brought vegetables. Parents brought what they could. They wanted to make sure the children have something to eat.”

Community group Concerned Citizens of PE Metro also brought some vegetables and food to the school to help.

One of the parents at the school, Inez Janhoff, said they were trying to make sure that the children have at least something to eat but given the large numbers of meals needed they can only plan from day to day.

“My daughter is in Grade 1 there. The fence at the back of the school has been destroyed by people. It is where the toilets for the girls are so a teacher must walk with them when they want to go to the toilet.

“I also put some things together for the school. At the moment I can still send my daughter to school with a sandwich, but it is good to know that if we can’t provide any more the school can help.

“We sorted food for today but I don’t know what we are going to do tomorrow and on Thursday,” she said. “The school always provided good meals for the kids. Rice and tinned fish or something like that. They give them chicken and pasta. Really good food. They always give them vegetables. We really try our best but this is terrible. The school is in a bad spot.

“Last year, I took my child out of Grade R after gangsters ran into the classroom and started threatening the teacher.

Last year, the body of a woman who had been brutally raped and murdered was found in a field adjacent to the school where the Grade R classes are.

Provincial government spokesperson Malibongwe Mtima said the losses have been reported to the Eastern Cape Department of Education’s district office “with the intention to procure lost items” and restore safety at the school.

Community leader Christian Martin said the school was in a dangerous place. “There are a lot of gang activities. The heartbreaking part is that we as the parents and the brothers are the ones that stole from our own kids. I say we because I am part of everybody. That is the lowest that you can go. The department must also help us. They must come on board.

“The need for food in that area is massive. The income sources there are grants, pensions, drug posts and taverns — the kids need the food.

“But we don’t want to be seen as victims. The community must find out who has done this. We must go there and go get our children’s food back. Ons moet die ding vasvat. Without violence.

“We must then take them out of the community. The taverns must stop providing a safe house for these people.

“All that food is a lot to get away with … people will already know who did it. One of our community members has put out a reward for information,” Martin said. DM/MC

If you can help with non-perishable food, bread, juice concentrate, vegetables or rice, chicken and pasta for the children, please email Estelle Ellis on [email protected]