Want an illegal gun in Western Cape? Not a problem 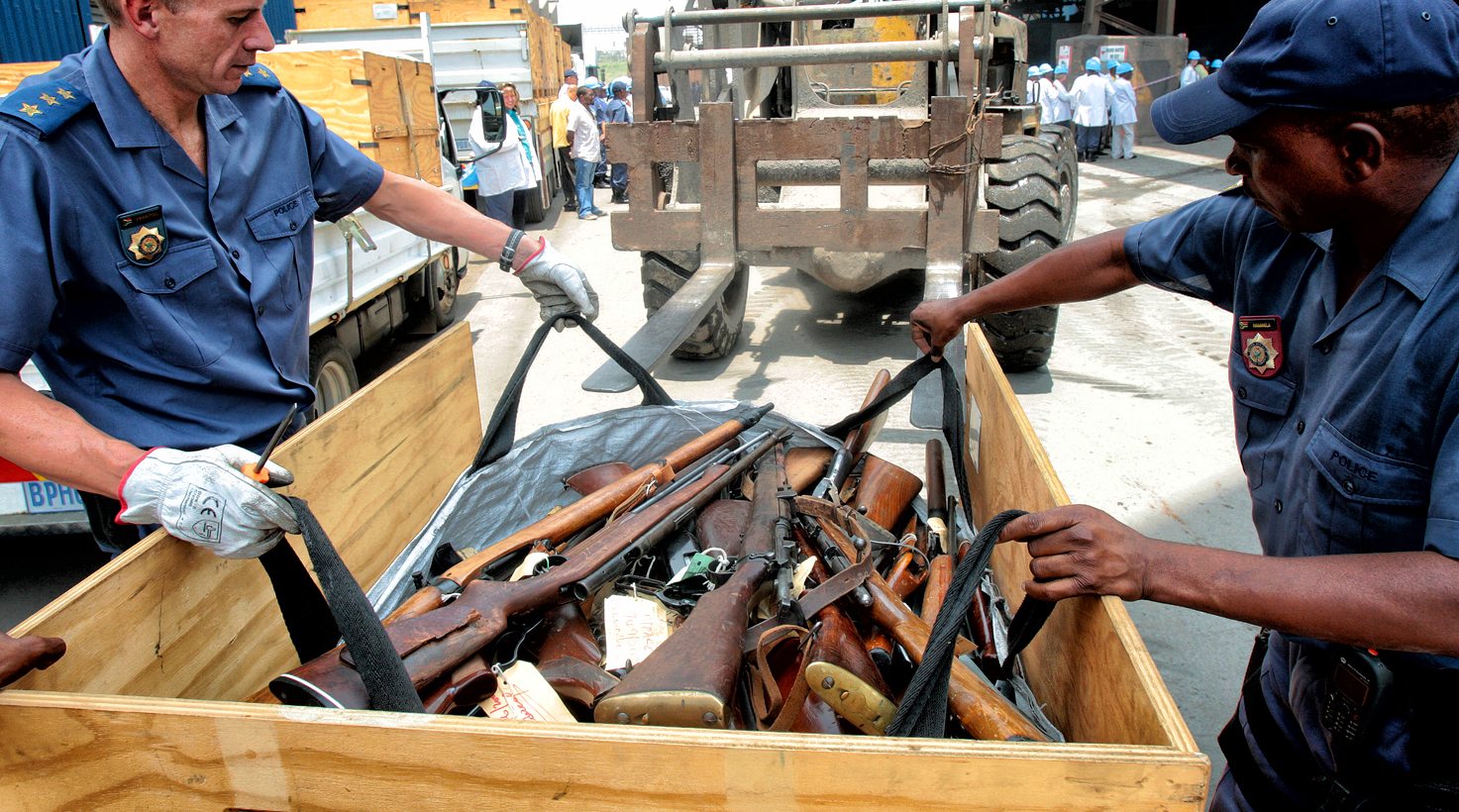 Illegal guns about to be destroyed. South African police officers destroy thousands of weapons to mark the start of a an amnesty for illegal guns

Seven years’ worth of investigations show that illicit firearms are widely available to gangsters in the Western Cape, and that police officers are sometimes those selling them. They will provide fraudulent licences, too.

Criminals in South Africa’s most gang- ravaged province, the Western Cape, have been spoilt for choice when it comes to getting hold of guns to carry out atrocious crimes from assassinations to intimidation.

A series of arrests and police investigations, stretching back more than seven years, and involving at least three provinces – the Western Cape, Gauteng and KwaZulu-Natal – show that although there has been a clamp- down on some alleged firearm channelling networks, there have been other avenues gangsters could turn to.

In three sets of arrests over the seven years several South African Police Service (SAPS) members have also been detained, hinting at just how rife state complicity in this arena is – and why certain cop investigations seem to have faced internal resistance.

In one of the latest gun-smuggling arrests, the Hawks detained a firearms dealer from Durban, Anderson Padayachee, on 11 February. According to a Hawks statement, he was allegedly “linked to an illegal supply of firearms through his dealership to criminal gangs in the Western Cape”.

Padayachee now faces roughly 61 charges, including for eight murders carried out around the Western Cape between May 2018 and February 2019, as well as five attempted murders. The charge sheet against him alleges that he acted to benefit the Terrible Josters gang.

Previously, a witness in a Western Cape court case relating to the Terrible Josters testified that it “has a membership of at least 10,000”.

During the prosecution of this case, it was also claimed that the leader of the gang was Ernest “Ernie Lastig” Solomon, from the Western Cape, who was assassinated in Boksburg, Gauteng, in November last year.

The channelling of firearms to gangsters is a problem that has dogged the Western Cape for decades – under apartheid, operatives used gangsters to carry out crimes – and there have been several operations to try to staunch the flow of weapons to criminal hands.

In December 2013, one of the country’s biggest such operations, which also became one of the most controversial operations, codenamed Project Impi, started up.

It was run by Lieutenant-General Peter Jacobs, the country’s now-suspended Crime Intelligence head, and Major-General Jeremy Vearey, head of detectives in the Western Cape.

This case centred on allegations that the cops had created fraudulent firearm licences for suspects.

The charges against Stanfield and his co-accused were provisionally withdrawn in October 2016 but were later reinstated and more suspects added to the case.

Court papers linked to this Stanfield matter said it “was complicated by the number of suspects in different provinces and the suspected involvement of present and past members of the SAPS”.

Project Impi’s focus was also on former police colonel Chris Prinsloo, who had been a commander of the De Deur station in Vereeniging, and Irshaad Laher, a reservist there. 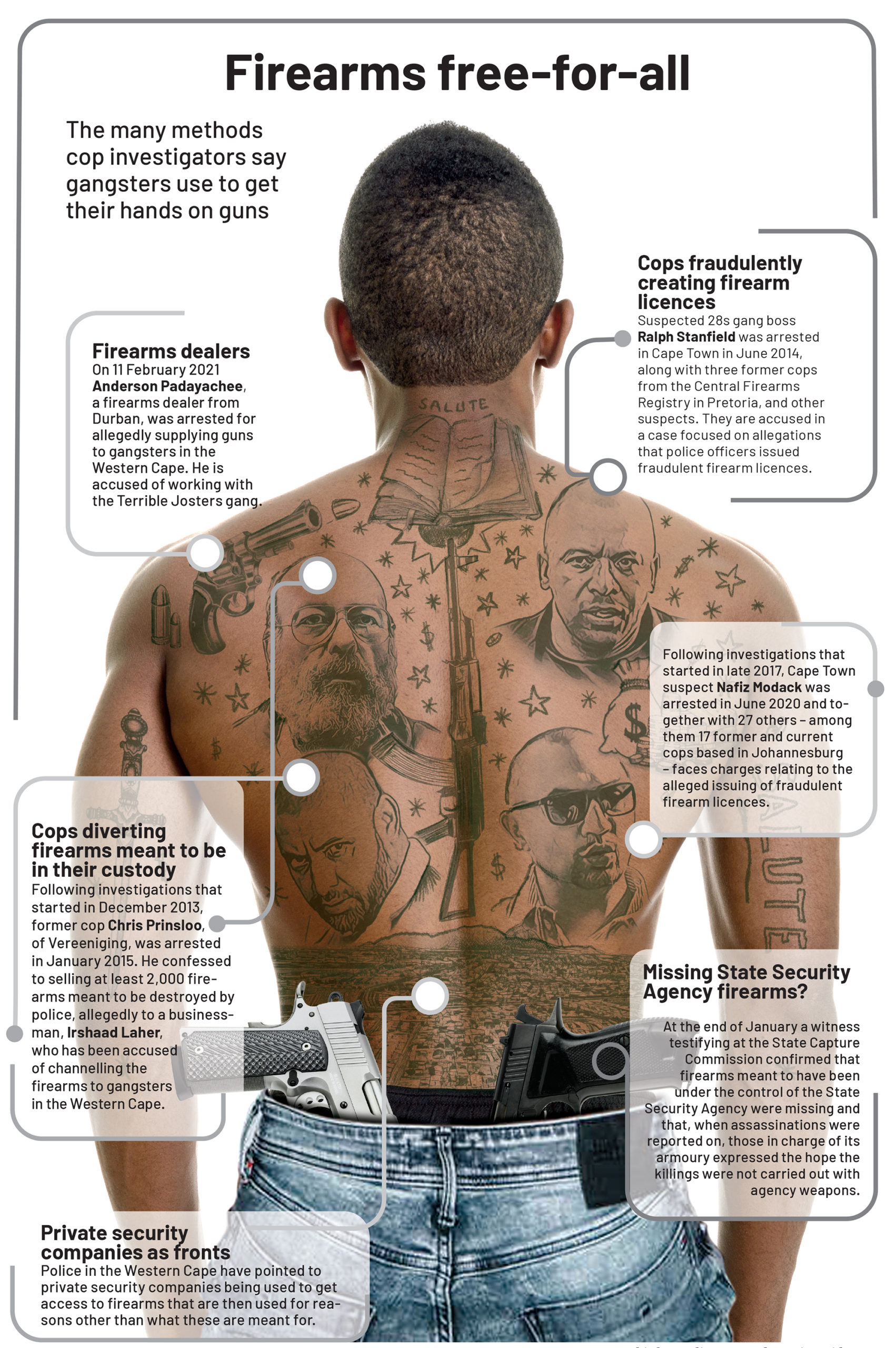 It was suspected Prinsloo had funnelled firearms, meant to have been destroyed by police, to Laher, who then allegedly acted as a middleman, getting the guns to Western Cape gangsters.

Firearms identified by Project Impi were believed to have been used in gang hotspots between 2010 and 2016, and more specifically, according to court papers relating to it, “in 1,666 murders, 1,403 attempted murders and 315 other crimes”.

Many children were among the victims of these incidents.

Yet, in the same month that Laher was arrested and before they could make more arrests, Vearey and Jacobs were suddenly transferred from the positions they held at that stage in the Western Cape’s police.

Vearey, in a June 2016 affidavit about his effective sidelining, said: “Operation Impi has been decimated on the orders of SAPS management.”

He and Jacobs charged that they were seen as part of a political faction within the police, with Vearey saying this was fuelled by the idea he was pivotal in the recording of a statement by former member of Parliament Vytjie Mentor, who blew the whistle on alleged State Capture involving the Zuma family.

Prinsloo was sentenced to 18 years in jail in 2016 but paroled in April 2020 and has since turned state witness. Laher is yet to go on trial.

About 18 months after Vearey and Jacobs’s transfers that left Project Impi investigations tapering off – in late 2017 – fresh investigations were launched into suspicions that suspects based in Cape Town were somehow getting firearm licences via Johannesburg.

National police spokesperson Vish Naidoo said: “It emerged that during November 2017 security companies were involved in crimes of extortion in the Western Cape province relating to firearm applications in Gauteng.

At that stage – January 2018 – Cape Town suspect Nafiz Modack and four other men were in custody on charges relating to extortion and allegations they had tried to seize control of private security operations focused on the city’s nightlife.

The investigating officer in this extortion matter was Lieutenant-Colonel Charl Kinnear, who at that stage was part of a team working under Vearey’s command.

In February 2020, Modack and his co-accused in the extortion case were acquitted.

But, roughly four months later, in June last year, Modack was again arrested, this time along with several police officers based in Gauteng.

Kinnear, then working under Anti-Gang Unit head André Lincoln, was among the cops investigating this network and it was anticipated that more police officers would be arrested.

But on 18 September Kinnear, who previously complained that some cops linked to Crime Intelligence in the Western Cape were aligned to Modack and working against him and close colleagues, was assassinated outside his Bishop Lavis home in Cape Town.

The investigations into the Gauteng-Western Cape firearm licence network continued, though, and by the end of the following month, October last year, 28 suspects – 17 of them police officers, two of whom are retired – had been arrested.

This massive case, which mirrors the matter against Stanfield, is expected back in the Kempton Park Magistrate’s Court towards the end of this month.

Meanwhile, over three-and-a-half years ending last year, Modack’s name was linked to two different private security companies that approached the Western Cape High Court to have firearms that were seized by police returned.

Police investigators claimed the companies were used as fronts to gain access to firearms that were then used for nefarious reasons.

The backdrop to these firearm-smuggling probes is workplace upheaval involving, and claims against, several of the cop investigators who have probed these networks.

Vearey and Jacobs were in effect demoted while heading Project Impi in June 2016;

In January 2018, during an underworld court case focused on Modack, claims were heard that Vearey and Kinnear were on other suspects’ payrolls;

In December 2020, in another underworld court case in Cape Town, claims emerged that Lincoln, with Kinnear’s knowledge, had worked with suspects to potentially orchestrate a hit;

Jacobs was suspended in December 2020, relating to an internal probe into spending and the secret service account, but this suspension is set to be lifted next month; and

Lincoln and Jacobs are among police officers facing an internal investigation relating to Kinnear’s lack of security in the run-up to his murder.

Meanwhile, the gunman who pulled the trigger on Kinnear is yet to be arrested.

The situation in the Western Cape is exceptionally worrying, even more so when the testimony of an unidentified witness at the State Capture Commission a few weeks ago is taken into consideration.

This witness spoke about firearms that went missing from the State Security Agency while Jacob Zuma was president.

She said: “The conditions under which the armoury people had to work are very concerning … one of them actually told me and the team that each time there is a media report on … an assassination … they always get nervous because they are thinking, ‘We hope it is not one of our firearms’.” DM168