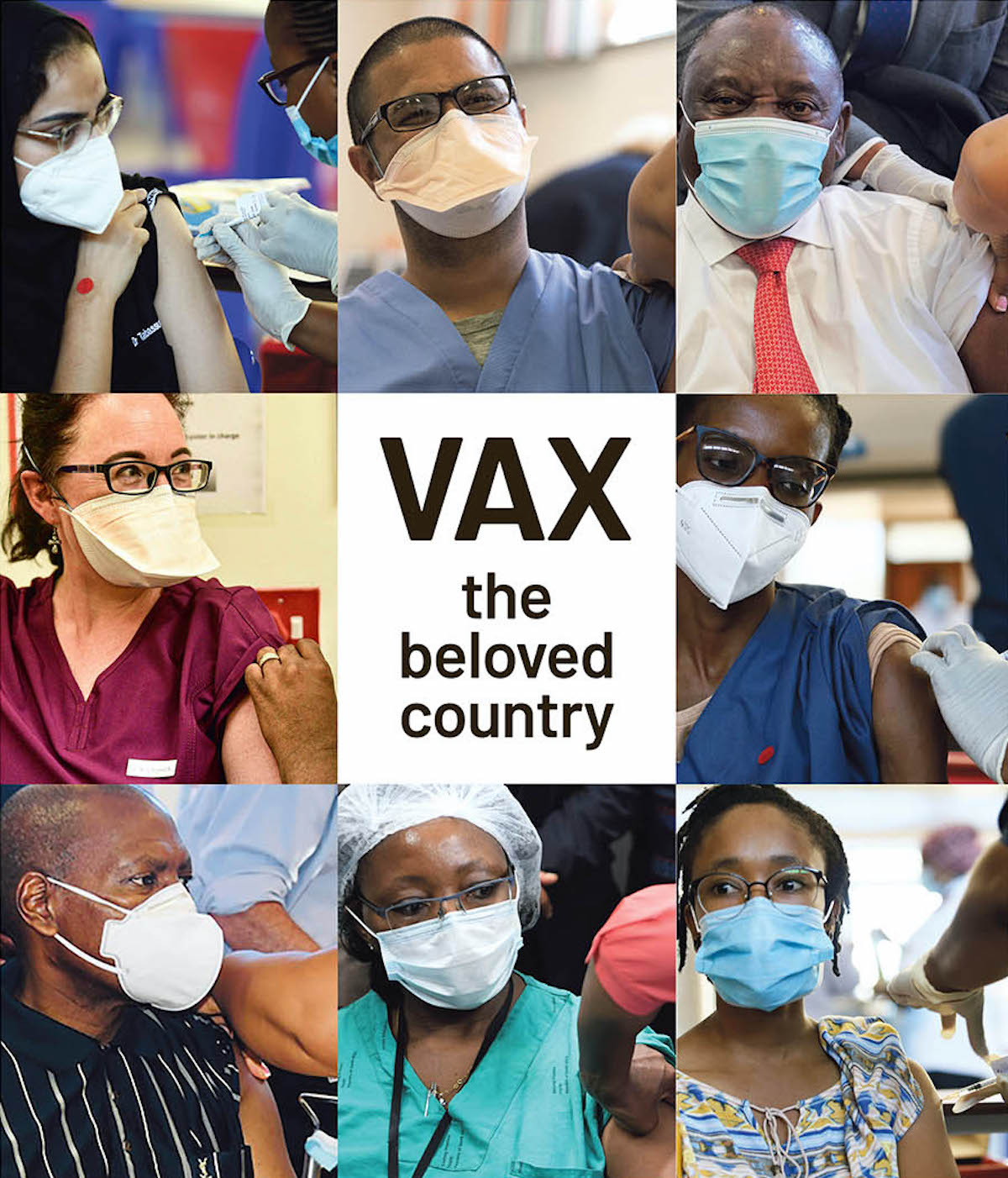 A team including lead investigator in the Johnson & Johnson trial, Professor Glenda Gray, and Dr Zweli Mkhize moved mountains to get the J&J vaccines into the arms of health workers.

Armed with courage, a sense of urgency, an ability to survive on steely determination and almost no sleep, a team of people including the lead investigator in the Johnson & Johnson trial, Professor Glenda Gray, and the Minister of Health, Dr Zweli Mkhize, moved heaven, earth, a whole lot of aeroplanes and trucks and many, many boxes to get the precious doses of the Johnson & Johnson vaccines to the provinces and into the arms of health workers.

“‘Our health workers cannot wait’ is what I kept repeating,” said Professor Glenda Gray as she described what she called the “mad dash” to get the vaccine to South Africa.

“There were huge expectations,” she said. “We had to get to the health workers. The second wave had been torrid.”

According to statistics from the National Department of Health, about 40,000 South African health workers contracted Covid-19, 6,473 have been hospitalised and 663 have died.

Speaking to DM168 early on Friday, an exhausted Gray said that a few weeks ago, after the arrival of the Oxford/AstraZeneca vaccines in the country, she received a call from Professor Shabir Madhi, the lead investigator in the AstraZeneca trial to say that the early data he was seeing concerned him.

“We spoke to the minister to say there was a problem. My results [in the Johnson & Johnson ensemble trial] just came out and I shared them too,” she said.

The AstraZeneca vaccine was found to be only 22% efficacious in preventing mild and moderate Covid-19 caused by the 501Y.V2 variant that had first been identified in South Africa.

Gray said at the time a million doses of the AstraZeneca vaccine had already landed in South Africa and were under quarantine.

The Johnson & Johnson vaccine had fared better against the 501Y.V2 variant, showing a 57% efficacy at preventing moderate disease and 85% efficacy in preventing severe Covid-19, hospitalisation and death.

Gray said: “I started making these phone calls to Johnson & Johnson: ‘Do you perhaps have a spare million doses lying around somewhere in the world?’ I asked.

“I explained the situation to Dr Paul Stoffels [the chief scientific officer of Johnson & Johnson and vice chairman of the company’s executive committee]. I told him how our health workers had to endure two waves of infections with inadequate PPE. He is an infectious disease specialist. He worked in the Congo as a young doctor. He knew about Ebola,” she said.

“‘Glenda, that is terrible,’ is how he responded, saying: ‘I will see what I can do.’

“In the next 24 hours, Johnson & Johnson was going through their global inventories to see what they could find. They started bringing vaccines back to Belgium using their own planes. Dr Stoffels was very moved by our plight. We had meetings every 24 to 48 hours.”

She said when the team then shared their plans with Mkhize, he became very excited. “He said, ‘Let’s have a discussion and see what we can do.’

“We had the vaccine and we knew it was safe and it worked, but we were not sure yet how we were going to ensure access to it. After some consultation we had decided that we would do an early access implementation trial with oversight by the South African Health Product Regulatory Authority [Sahpra].

She said they had to jump through quite a few logistical hoops.

“We had to move fast and careful,” Gray said. “Our aim was to just get the vaccine here. We didn’t want to miss a single day. We had 14 days. We wanted to have our plan in place before the Oxford/AstraZeneca results came out. We wanted to avoid our health workers becoming panicky and anxious.”

It was decided that the vaccine would be distributed as part of an implementation study because this would not delay the process any further.

“We managed to get our study protocol to the South African Health Product Regulating Authority in 24 hours for review. I kept thinking every day we lose is a day we can’t get into the field.”

Gray said the protocol was submitted on the Monday. Sahpra returned with queries on the Wednesday, her team had these answered by the Thursday and they received the green light the next day.

“Sahpra and the national department moved heaven and earth for us but they didn’t just give us the green light. It took us 18 hours and no sleep to answer all their queries.”

Next, an urgent meeting was convened for the clinical trial meeting.

“We also submitted our protocol to the ethics committee. They also scrutinised it. There were no free passes for us. They too came back with a long list of questions we had to answer.”

But eventually the Sahpra permits and permits from the Department of Agriculture were released, clearing the way for the vaccines to arrive on South African soil.

“Meanwhile they were packing the vaccines in Belgium. There was a curfew in that country so that made it a bit difficult.

“I just felt that we were moving mountains.”

Late on Tuesday night, Gray was at the OR Tambo International Airport to “welcome” the first batch of 80,000 vaccines.

The plane was about two hours late because of headwinds.

“We then had to pack for the provinces. We managed to convince the warehouse to stay open all night so we could pack. At 3.42am on Wednesday morning the first shipment left,” she said.

Vaccines were being transported by road and plane to all the designated vaccination centres in South Africa. Pictures of the president, doctors, nurses and support personnel with rolled-up sleeves started appearing on social media. Health workers were using the hashtag #Covid19Vaccinated.

“We only missed two days,” Gray said, explaining that Monday would have been the original start date for the use of the AstraZeneca vaccine.

“And we had to move the time of the first vaccine to 1pm. I wanted all the provinces to start together. It more or less worked but it was a mad dash. Also remember that scientists are completely OCD,” she said, smiling.

Gray said she was feeling very grateful when the first vaccine was administered. “Our health workers deserved this vaccine. It was amazing to see the gratitude on their faces.”

President Cyril Ramaphosa was one of the first recipients of the vaccine. He said in a statement on Wednesday that he decided to have it “to demonstrate our confidence in this vaccine and help allay any fears that people may have”.

“I think we should celebrate the courageous leadership that he has shown. He had the guts to say that the Oxford/AstraZeneca vaccine was not the right one for us. The World Health Organisation had said it was good to use, but Mkhize stood up and said we will make another plan. He could have just remained quiet, like many politicians would have done, but he didn’t. He helped us make a plan.”

In his response to Ramaphosa’s State of the Nation Address, Mkhize called it a miracle.

“The immediate rollout of phase one vaccination with Johnson & Johnson through the Sisonke protocol has been made possible by the fact that the 300,000 doses of the now proven and efficacious Johnson & Johnson vaccine were already tested and approved by Sahpra for use under study conditions. It was the quick thinking of the leadership at MRC [the Medical Research Council] that brought us this solution when we were faced with this issue. This was smart thinking which is worthy of celebration and I must thank the team at the Medical Research Council led by Professor Glenda Gray, the officials at the National Department of Health led by the Director-General, Dr Sandile Buthelezi, and Johnson & Johnson for essentially working a miracle to ensure that our plans are not derailed.”

Mkhize said he was very happy that the rollout of vaccines had started, but added that the target is to reach 80,000 health workers in the next two weeks and push phase two (the vaccinations of essential workers and older people and those with comorbidities) forward to begin earlier than in three months’ time.

Manufacturers apply for vaccines to be licensed after trials show them to be safe and effective, and this is currently under way in the US, Europe and South Africa.

By using an implementation study, the vaccines would become available immediately to healthcare workers using a research programme while the licensing process takes place.

By Thursday evening, 2,260 health workers had been vaccinated.

More deliveries of the vaccine are expected every two weeks. DM168