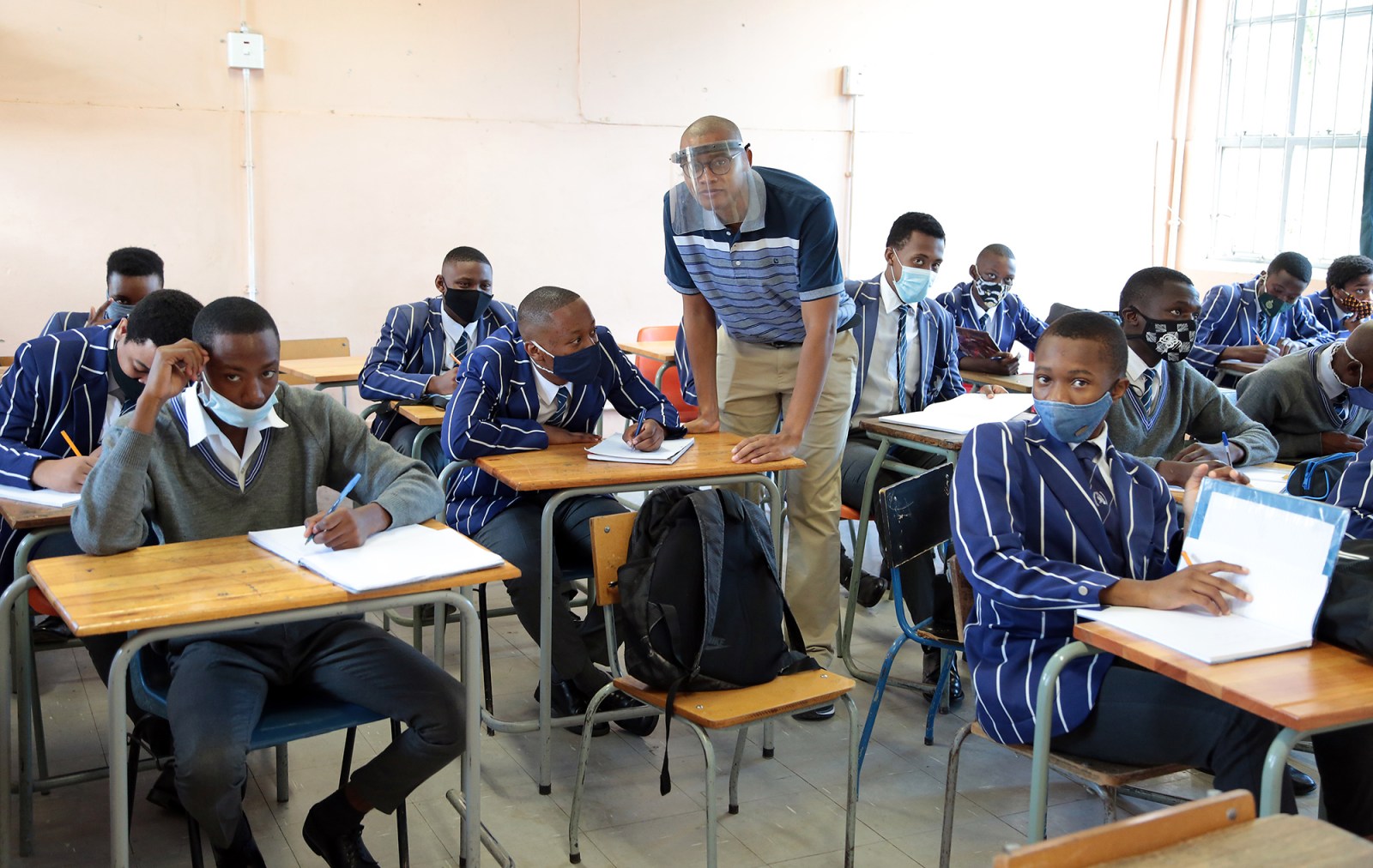 What happens when the location of a school renders it rich – but learners can’t afford the fees?

A memorial frame with a list of past rugby captains at Highlands North Boys High School is acutely telling of the transformation undergone by the school since it was established in 1939. But where have all the white learners gone?

Enclosed in the leafy suburb of Highlands North, known for its high-walled dwellings that sell for millions of rand, sits Highlands North Boys High School – a 33-classroom government school that has been in existence for more than 80 years.

Known as one of the top rugby schools in Johannesburg, Highlands North was once an all-white school attended by a mix of Jewish, English, Italian, Lebanese and Portuguese boys from working-class communities. Today, it serves learners from Alexandra, Soweto and the Vaal.

“The school is geographically located in one of the top suburbs in the country,” said Mike Masinge, the school’s 11th headmaster. “But we are not servicing learners from Highlands – 70% of the learners we are servicing are from Alexandra, Vaal, [and] Soweto, and mainly come from a disadvantaged background.”

In 82 years of its existence, the school has had two black headmasters.

The school was co-educational, meaning it offered tuition to both boys and girls, but later split when its sister school, Waverley Girls High, was founded in 1952.

In comparison to other schools in the area, the boy’s school charges a somewhat affordable R13,500 a year in school fees, as capped by the school governing body during its annual general meeting. “But we do find that some cannot afford to pay that amount of money. So we are unable to maintain some of the operational costs that sometimes include paying educators,” Masinge said.

The school has since closed its swimming pool because it cannot afford to maintain it or keep it running.

With a blend of Cape vernacular and Tuscan architecture, the school’s building stands firm after decades of use, but the inside is falling apart. The chairs and desks are old, wall paint is peeling and some parts of the school grounds, such as the 25-student hostel, have been closed and cordoned off due to lack of funds.

“You need to get school fees to pay for other services. Also, government funding is ring-fenced because, for each expenditure, textbooks or maintenance, there is a designated budget so you cannot spend textbook money to hire more teachers,” he said.

An additional obstacle for the school is that although only a fraction of learners can afford to pay school fees, as per the government’s school funding policies, the school is classified as a quintile 5 school, which means it is considered a “rich school” because of its location.

Last year, according to the headmaster, they had 756 students but only 50% could pay school fees while the remaining 50% either could not pay at all or could only afford to pay a fraction of the fee.

Masinge said although the financial burden had worsened over the years, “children have got a right to education so you cannot close doors because they are not paying school fees”.

During the dying days of apartheid and the dawn of democracy, formerly white schools opened their doors to learners from all racial backgrounds. It marked the beginning of an era where children from all walks of life would finally be afforded the opportunity to access some of South Africa’s well-resourced schools previously reserved for only a minority.

Riccardo Houghton, an old boy of Highlands North and current school governing body (SGB) chair, said when he matriculated in 2003, the school was fairly mixed race: “I was friends with all the boys, and no one cared about the colour of your skin or background, we got along well”. At the time, according to Houghton, the demographics “represented South Africa and our diverse cultures”. I think parents started withdrawing their children from the school because they thought its standard dropped,” said Houghton. “I call that ‘segregation via exclusivity’ because you want your kids to be around more white kids.”

Houghton believes the school’s demographics have changed for the better because learners from less affluent neighbourhoods now have the opportunity to get the good quality education still offered at the school.

Despite the funding and resource challenges, the school continues to maintain an excellent pass rate. The matric class of 2019 obtained a 90% pass mark, 97% in 2018, 90% in 2017 and 80.5% in 2016. Highlands North has produced prominent sportsmen and public figures such as retired Pumas prop Sabelo Nhlapo, former footballer Mbulelo Mabizela, Spur Corporation founder Allen Ambor and hip hop pioneer Osmic Menoe.

Masinge does not shy away from praising the work done by the school’s old boys to keep it running. “We are lucky to have a group of old boys from the school who, from time to time, help the school with maintenance and other needs that arise.”

He said the school was proof of the importance that alumni could play in keeping a school’s legacy alive.

Mojuta Motlhamme, a former old boy and now a history teacher at the school, said: “As alumni of any school we should ask ourselves what are we aspiring to. Yes, we might not get to that level where we have a clubhouse, a bar on the school grounds like your St John’s, but how do we make our schools better spaces.” 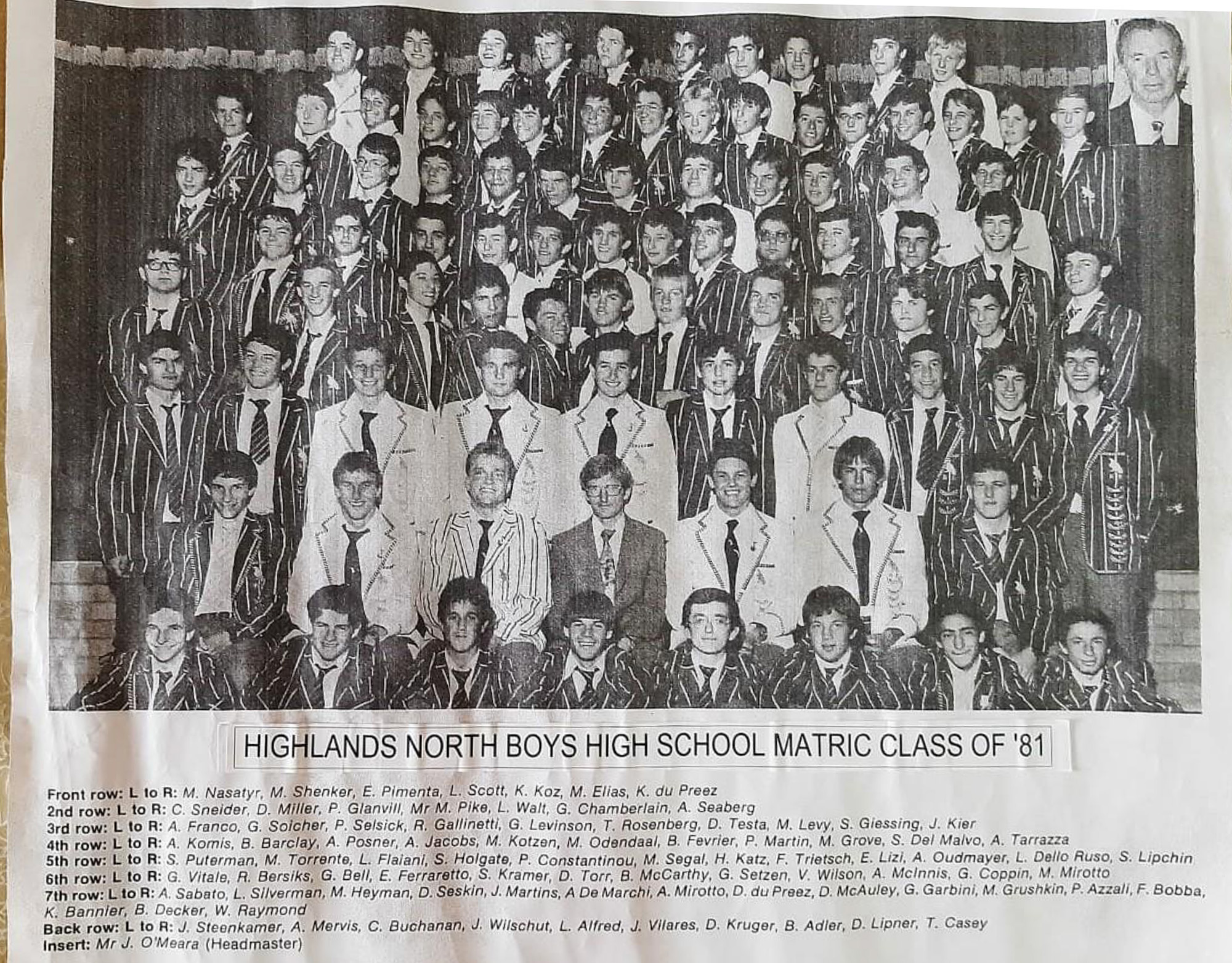 A letter published on the Daily Maverick website, written by old boy and filmmaker Ben Horowitz (see below), has spearheaded a fundraising initiative by the class of 1981 that will see the school receive an additional two prefabricated classrooms. Horowitz’s letter exposes the toxic “macho” and racist culture that once thrived at the school.

Many years later, Motlhamme says, “there is still that intergenerational inheritance of masculinity” that lurks in the school.

“When we reconceptualised orientation for our grade 8 learners, we talked about coming and teaching them about the values of the school from a different perspective, like what it means to be a Highlander who respects women, respects themselves, the school community, their blazer, without actually using the violent masculine approach,” he said.

But the challenge now is that “some of the boys come from violent communities and they bring toxic masculine behaviours from their community into the school. And it begs upon us to say how do we come up with ways to deal with masculinity.” DM168