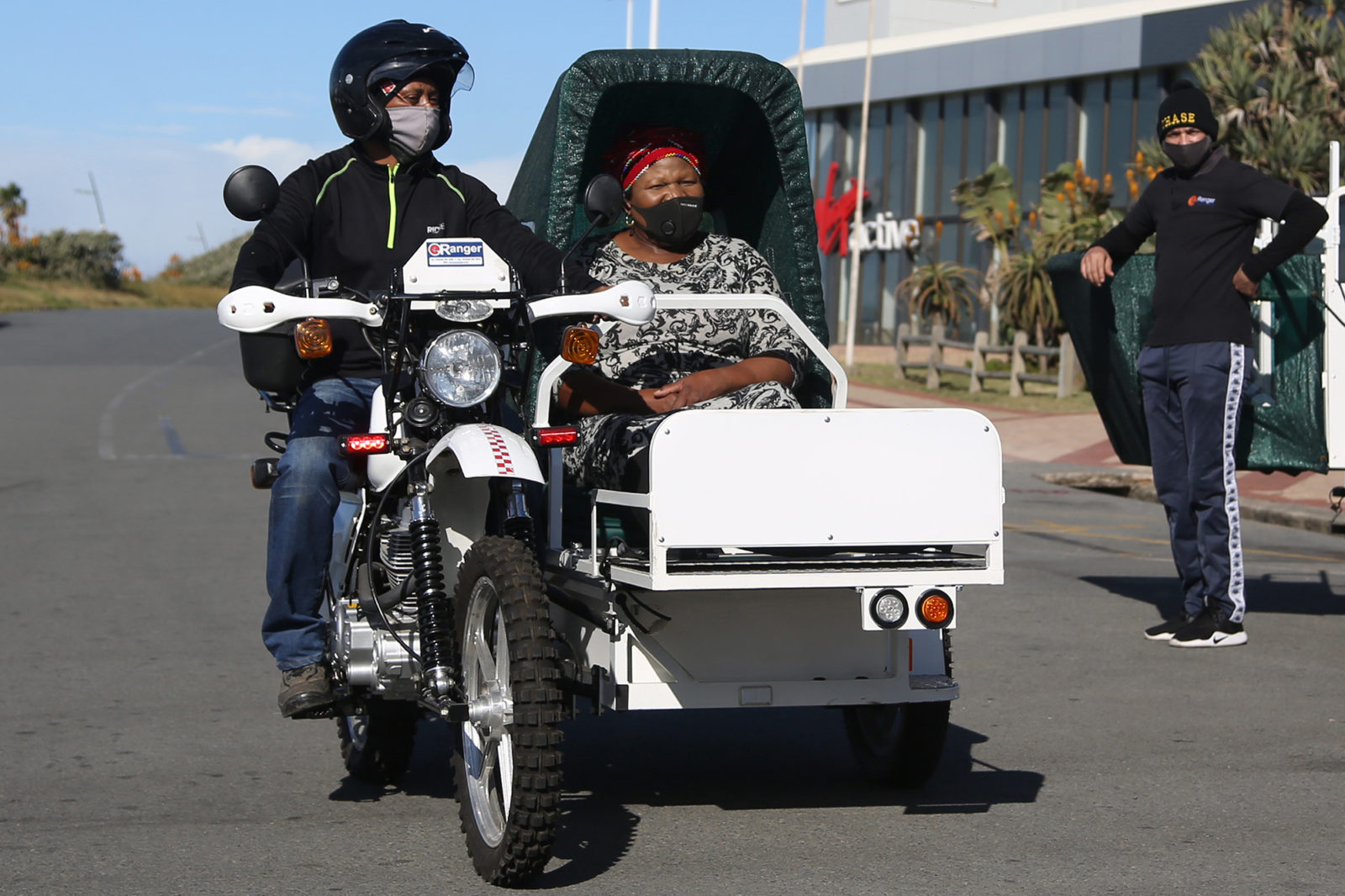 Health MEC Sindiswa Gomba taking a ride on one of the e-ranger motorcycles in East London. (Photo: Supplied)

Sindiswa Gomba will be remembered for her disastrous handling of the coronavirus pandemic, even driving the normally sanguine Dr Zweli Mkhize to anger.

When Eastern Cape Premier Oscar Mabuyane fired Health MEC Sindiswa Gomba on Thursday, he brought a chaotic 22 months to an end. Although Mabuyane defended the brash former ANC councillor, saying she tried her level best and paid a huge price by being infected with Covid-19, Gomba will be remembered for her disastrous handling of the coronavirus pandemic, even driving the normally sanguine Dr Zweli Mkhize to anger.

Her appointment constituted a brief but fairly disastrous diversion in a long line of Health MECs in the province who were mostly doctors, known for their empathy and their deep roots in communities but who failed to fix much in the byzantine bureaucracy that is the Eastern Cape Department of Health.

Very few Health MECs last longer than two years in what is known to be a brutal portfolio. Gomba, who was the Buffalo City metro’s longest-serving councillor before she became MEC, almost made it for 22 months.

After he dismissed her, an uncomfortable-looking Mabuyane was still defending her performance.

She will still stay on as a member of the provincial parliament.

Mabuyane said the Special Investigating Unit (SIU) had recommended that he take action against Gomba and the former head of the Department of Health, Dr Thobile Mbengashe, for their part in the R10-million scandal-riddled procurement of medical scooters for the province.

A disciplinary hearing will be held to determine Mbengashe’s fate.

The premier has been very loyal to Gomba throughout her often disastrous tenure as Health MEC that resulted in Mkhize having to send in a project management team to take over the Covid-19 response in the province.

The most pressing issue in the department, the handling of multibillion-rand medico-legal claims, was moved to the premier’s office. As she stumbled her way through the pandemic, Mabuyane again moved the handling of the Covid-19 crisis under his wing.

At the time that the first cases of Covid-19 infections were confirmed in the province, many hospitals were facing a dire shortage of personnel, PPE and basic equipment such as blood pressure cuffs – there had been warnings about this in early March already.

In all fairness, Gomba did not find a department that was in great shape in the first place and most certainly it was not a health system prepared for a pandemic.

In April, Gomba was overheard saying the word “Andidikwe” (I am gatvol) during a briefing with Health Minister Mkhize. She later said she was hot and was referring to her doek.

A month later, during a live television interview, a fart was clearly heard. Gomba denied she had farted, saying rather it was the sound she made because she couldn’t remember a difficult word.

In July, when the emergency room at Livingstone Hospital, the designated Covid hospital for the province’s biggest metro, had to be temporarily closed after cleaners went on strike, Gomba announced she was visiting Matatiele, on the other side of the province.

When asked why she was not attending to the crisis at Livingstone Hospital, her spokesperson Judy Ngoloyi replied: “The MEC is not the only one working in the department. There are other people who can do it.”

The other Covid-19 hospital in the metro, Dora Nginza Hospital, was struggling with severe oxygen shortages and deaths skyrocketed. Around the same time, the department stopped updating Covid-19 deaths for Nelson Mandela Bay.

It was only after Mkhize visited and told Gomba that he wanted to see updated stats each day that this resumed for a short while.

Mabuyane’s office has refused, until today, to release the damning report into the state of hospitals during the Covid-19 pandemic that was drawn up by Zungu.

“[MEC Gomba] has tried her level best. Knowing the historic challenges in the department, she was coming right. She was dealing with core fundamental issues. It was unfortunate that something of this nature happened. She was hands-on, empathetic and dedicated,” he said.

The medical scooters that were to be used as mobile clinics were controversially procured with Covid-19 funds, even though the decision to procure them was taken before the outbreak of the Covid-19 pandemic in December 2019.

Gomba also appeared in court last week after the National Prosecuting Authority reinstated charges against her and 14 others for allegedly looting funds from Buffalo City Metro meant for the funeral of Nelson Mandela. Gomba was a councillor at the time of Mandela’s death on 5 December 2013.

She was provisionally charged with corruption, money laundering, fraud and contravention of the Municipal Finance Management Act. She was released by the East London regional court on R1,000 bail.

It is not the first time she has appeared in a court of law. In 2006, she was charged with assault after beating another woman with a hammer during an African Peer Review conference at an East London hotel. Charges against Gomba were later withdrawn and no reasons were given.

In papers before the special tribunal describing the scooter tender, SIU chief forensic investigator Glenn Muller said that the “MEC, who has no role in procurement matters, played an instrumental [part] in directing how the transaction should be handled,” adding that the transaction was pushed through “hastily and inappropriately on the MEC’s instructions”.

Anele Yawa of the Treatment Action Campaign said it was their sincere hope that Gomba’s successor would be better equipped. “Perhaps a doctor or at least someone with a deep knowledge of public health,” he said.

“She wasn’t the whole problem but she was the political head of a department and she had executive powers to make changes – and that she failed to do. She bought scooters in a province that needed ambulances. Then she lied. How can you trust someone like that?”

He said one of Gomba’s disturbing legacies will be the many Covid-19-related deaths of healthcare personnel in the province because of inadequate PPE.

Thoko Mtsolongo of the Eastern Cape Health Crisis Action Coalition said they welcomed the announcement that Mabuyane had fired Gomba as Health MEC, and that former superintendent-general Dr Thobile Mbengashe will face disciplinary action for his role in the medical scooter tender.

“These are good indications that the premier is committed to ensuring accountability within the health department. The people of Eastern Cape deserve ethical and accountable leaders who will prioritise fixing the health system and saving lives,” she said. DM168