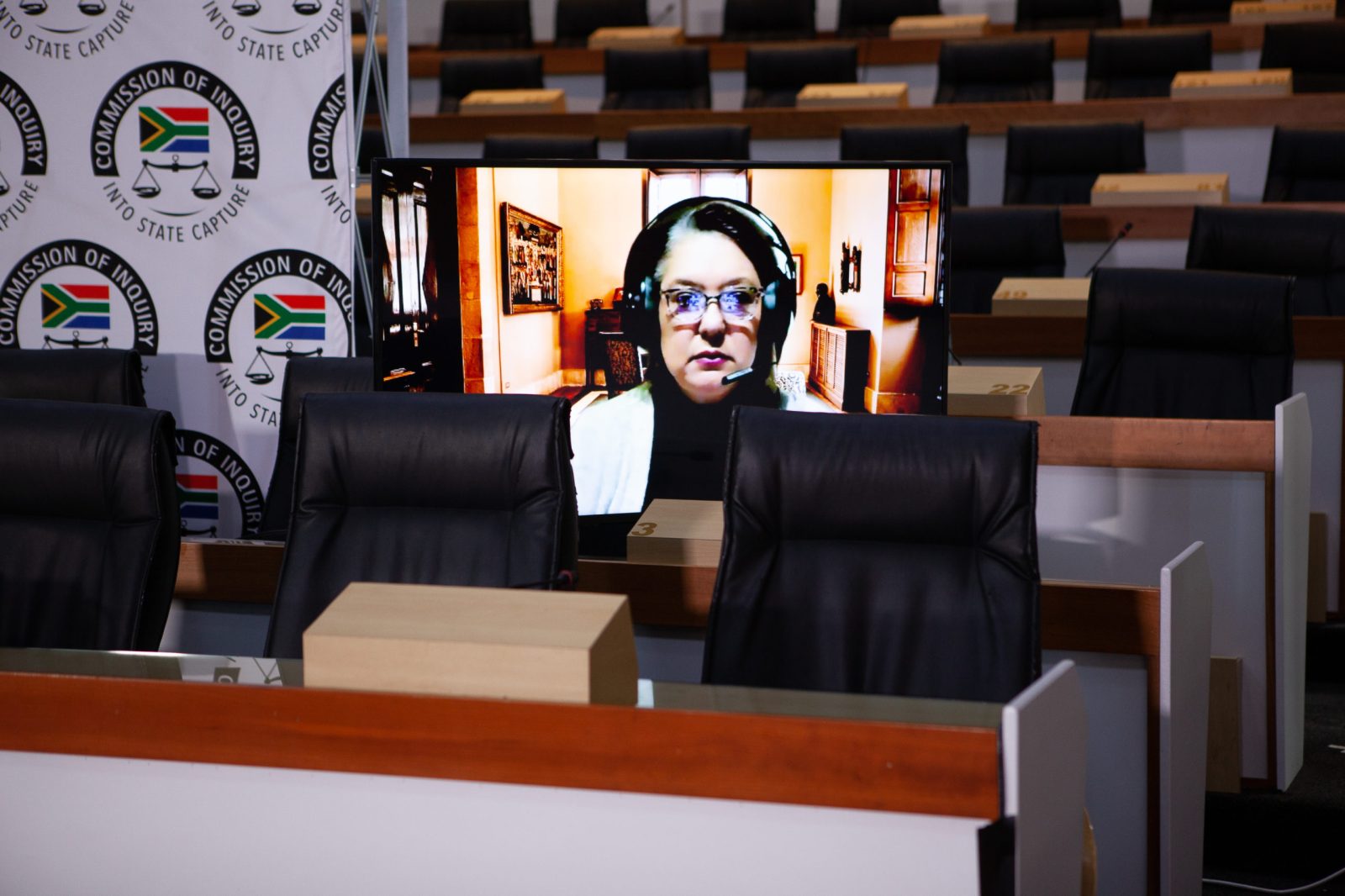 Former Head of Legal and Compliance at Eskom Ms. Suzanne Daniels testifies at the Commission of Inquiry on February 19, 2021 in Johannesburg, South Africa. (Photo by Gallo Images/Papi Morake)

The Zondo Commission on Friday heard evidence from Suzanne Daniels, Eskom’s former head of legal and compliance as well as group company secretary, about how the board and senior executives widened the path for ‘capture’ of the embattled entity.

Eskom’s former head of legal and compliance and former group company secretary, Suzanne Daniels made another appearance at the Zondo Commission of Inquiry  to provide further insight into the Gupta-linked Tegeta Exploration and Resources purchase of Optimum Coal Mine from mining giant Glencore.

As previously reported by Daily Maverick, Glencore’s sale to Tegeta took place due to a highly questionable board decision to prepay Optimum Coal Mine R1,68-billion. This prepayment was not negotiated with Glencore, but rather with Tegeta.

How Eskom board whisked through a R1.68bn agreement that benefited the Guptas

Commission chairman, Deputy Chief Justice Raymond Zondo told Daniels he “still” found it hard to believe that the Eskom board – on which some highly qualified people sat – approved the prepayment without questioning that it was made out to the “proposed owner”, meaning Tegeta, rather than the owner at the time.

While not saying so directly, Justice Zondo’s line of questioning intimated that he felt Daniels had been in dereliction of her duties as company secretary for failing to advise board members of this glaring issue.

Daniels reiterated that she, as the company secretary, drafted the agreement on the instruction of Eskom’s then CFO Anoj Singh and former head of generation, Matshela Koko.

“The underlying issue here is that this resolution was to assist the proposed owners to acquire Optimum,” said Daniels.

Justice Zondo interrogated further, seeking clarity on why Daniels did not question that the R1.68-billion agreement was for pre-payment to Tegeta and not Glencore, to which Daniels admitted that she “did not interrogate these issues”.

“I can’t understand how they [board members] could not have seen the resolution that they were being asked for; [it] was for three Eskom officials to conclude an agreement with the proposed owners and not Glencore.

“I have said to a few members of the board here and I find it difficult to understand that none of the board members saw this, including the chairperson Dr Ben Ngubane. He said [in his testimony] that as far as he was concerned they were concluding the agreement with Glencore.

“Dr Ngubane is a medical doctor, a politician, he was an ambassador, a minister, a premier of a province, and he continues to be a businessman.

“Did you notice that you were drafting a submission that the board must pass a resolution to negotiate with the proposed owner?” Justice Zondo asked again.

Continued Justice Zondo: “Why did you not ask Koko that? Should you not have offered legal advice? It would have been your job to advise the board.”

Daniels said she was not the legal adviser. Justice Zondo maintained it was the company secretary’s responsibility, even if not asked for advice, to provide it to the executives and board, who might otherwise have been unaware of the legal issues.

“It is difficult for me to accept that. None of these officials were lawyers,” he said.

Daniels then agreed that she should have offered legal advice.

Evidence leader, advocate Pule Seleka also painted a picture of how the internal operations of Eskom were being influenced by the Guptas, pointing to one example of how a board member’s questions to Singh were in fact answered by Gupta adviser, Mohamed Bobat.

Seleka questioned the rushed process in authorising the April 2016 pre-payment to Tegeta of R690-million, which happened to be the balance that the company needed in order to purchase Optimum Coal Mine from Glencore.

This was while Eskom was squeezing Glencore out of the mine, which was facing a penalty of R2,1-billion for supplying poor quality coal to the utility’s Hendrina power station in Mpumalanga.

“Who came up with the motivation for the prepayment, Miss Daniels?” asked Seleka.

The advocate posed the question again. “Who crafted or drafted the motivation for the prepayment?”

Daniels said she “assisted” a colleague with the drafting, and even though it may now look “problematic”, insisted that there was no collusion in the processing thereof.

Justice Zondo said Koko had testified that Daniels told him the email address belonged to Ngubane.

It is via this address that a number of confidential Eskom operations – including the R1.68-billion prepayment to Tegeta – appear to have been discussed by Daniels, Koko and Ngubane, which included instructions from “Business Man”, implying outside influence. The email has been touted as belonging to Gupta associate, Salim Essa.

“I at no stage told [Koko] the infoportal email address belongs to Mr Ngubane. I categorically deny that. Dr Ngubane had a personal email – [email protected],” said Daniels.

Koko was trying to “mislead” the commission, she claimed.

Justice Zondo asked whether Koko would have known Ngubane’s personal email address, to which Daniels replied he would. DM