Trans party: Gita November makes a name for herself 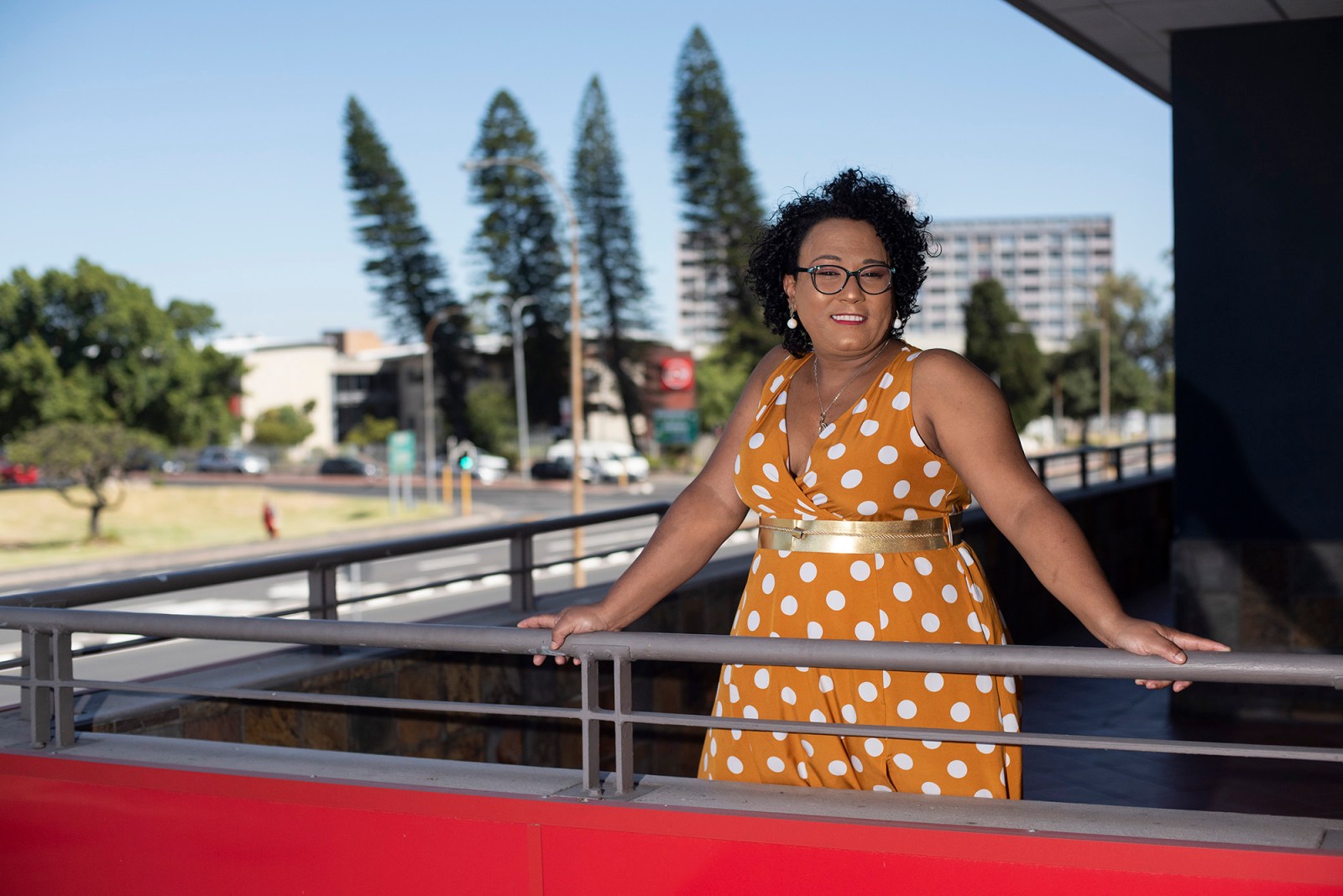 Gita November has left her ‘slave name’ far behind her, forging a new path as a determined activist, advocating greater access to gender-affirming healthcare.

Gita November’s transition was complete when her priest greeted her as “Sister November”.

The moment, at the New Apostolic Church Silversands in Kuilsriver, Cape Town, remains etched in her mind: “It was so special and emotional. Walking into the church… being greeted as Sister November. Then my priest came to my house and addressed me as Sister November, too.”

Before that, she had been Brother November. Gita took on the church in 2016, asking it to accept that her identity had changed.

“I wrote to the church’s head office, refusing to go to congregations as Brother November any longer. After some time, they accepted me,” she says.

“I think this was the final stage of my transitioning. To this day I am a full, active member of the church. I love it. The hats and the glitz and the glamour of it…”

On 28 May 1984, Gita was born as “Marshant November” in Sutherland in the Northern Cape. The youngest of five siblings, her father worked in a mine and her mother as a nursery school teacher. Laughing her deep laugh, 36-year-old Gita describes Marshant as her “slave name”.

“That’s my legal slave name,” she says. “I call it my slave name because I didn’t choose it. It was given to me. But actually I did come to love my slave name.”

In 2009, Marshant started to “fade out”. In his place came Gita – named after the vivacious Sewende Laan character, Gita McGregor. “I picked this name because Gita McGregor was such a strong woman,” says Gita. “Also, her sense of style!”

“I’m very much in touch with my feelings, more now than when I was as Marshant,” says Gita. “I was very morbid as Marshant. If I walked down the street, I wouldn’t greet anyone. I had this wall of protection, you know. Before anyone could even say something, I was already on the defence.

“Growing up I went through a great deal, coming out as a gay man, then later becoming a woman. So there was emotional turmoil. It was terrible.

“Funnily enough, I never had suicidal thoughts. God just made me a very happy person underneath it all. Seriously, I am happy now. I am in touch with myself.”

Gita is operations co-ordinator at the Trans Women Health Centre in Bellville, in Cape Town’s northern suburbs. She is effectively the heartbeat of the centre with its 15 staff, including a doctor and a psychologist. Affiliated to Wits University’s Reproductive Health and HIV Institute, the centre provides HIV prevention and gender-affirming healthcare services.

Among other things, it distributes hormone replacement therapy to transgender women, free of charge.

One of the centre’s overarching goals is to have hormone medicine rolled out around the country as part of South Africa’s primary healthcare package.

Inside the centre’s boardroom, against a wall, is a quote by poet E.E. Cummings: “It takes courage to grow up and become who you really are.” On another wall is a map of greater Cape Town, covered in koki scribbles. This is where they plan their outreach missions.

Gita explains that, with the onslaught of Covid-19, the operation was classified as an “essential service”, meaning it remained open even during lockdown Level 5.

“Nomafrench is like totally onboard,” says Gita. “If you want to see what Florence Nightingale would look like in our era, just look at Nomafrench. She’s open for discussions, and then she acts on it. When this whole Covid thing started, she made sure that we were safe, that we’re adhering to regulations at the clinic, and so on.”

Gita describes her activism style as “civil, not aggressive or bombastic”.

“My strength is that I have connections at all levels of society,” she says. “My philosophy is this: let’s sit down and talk; let’s listen to each other.”

Gita relays how attending a seminar on how to use storytelling in advocacy by American coach Murray Nossel in New York City helped to shape her thinking.

“Murray Nossel taught me how to get people to listen.”

What does transgender mean?

Gita explains: “To be transgender means you are not aligned with the gender that you were assigned at birth.

“Transitioning takes place when you start working on getting this alignment right. It’s all very personal and different from person to person.

“For example, I take hormone replacement therapy. Some trans women may have gender-affirming surgery done, like vaginoplasty.”

The fiery activist started taking hormone replacement therapy in 2018. With a flourish she shows off her chest, saying that she now wears a size C-cup bra.

She adds that in the Western Cape only four public sector gender-affirming vaginoplasty surgeries are done in a year, at Groote Schuur Hospital.

“This would put me on a waiting list of 24 years,” she says. “Which means I would be almost 60 years old when I got my vagina. Honestly, I can’t wait that long. Which is why I might as well accept my body the way it is, enjoying a fulfilling sex life as I am.”

Gita says a possible next step in her journey of self-affirmation would be orchidectomy, the surgical removal of both testicles. “So orchidectomy is the removal of the testes. I call them the twins. So I joke that I would be sending my twins to boarding school,” she says, laughing.

Gita’s face glows as she tackles the complexities around her situation with humour.

“Some of us don’t even want to use the word penis,” she says. “The word becomes shameful and disgraceful. The fact is that we do orgasm with a penis; it’s no use running away from that. So I’ve named my penis Johnny. And yes, he is a part of my history. If it wasn’t for him, then I wouldn’t be this fabulous person who is Gita.”

She points out that trans women with enough money could head to Bangkok or Mumbai for gender-affirming surgery: “I know someone who had the procedure done in Mumbai. She came back with a beautiful vagina. A foxy bonnet, that’s what we call it. It costs about R80,000 to R90,000 to have everything done, and to stay there a month to heal.”

Gita’s father passed away in 1997 in Sutherland. The following year, she moved to Cape Town with her sister to pursue better high school opportunities. Here she became a sex worker.

She recalls: “I was finishing my high school in Cape Town, we were staying in Observatory, a beautiful area with the Liesbeek River flowing through it. So, usually, after school I’d go sit next to the river. I was very fascinated with nature, I still am. That’s where my sex work started. My first experience was with this beautiful man… I called him my ‘River Man’. We had this interaction on a weekly basis.

“Then, after finishing school, I’d go Adult World-hopping; enjoying myself, watching videos and meeting people. Later, I started working for a bus company, working on the bus as a steward. I would also pick up clients on the bus. In this time, I bumped into this organisation called Sweat.”

Referring to sex work, Gita smiles and winks. “Yes, my darling, it still happens. You know, you can never retire from that profession.”

Gita plans a gradual exit from the Trans Women Health Centre, possibly towards the end of the year, to focus on her own organisation called Trans Tec SA.

“At Trans Tec SA, we are dedicated to stepping up our efforts in addressing this issue,” the website reads. “Through cooperation and community empowerment, partnership building with the department of health provincially, we believe we can facilitate progress in this area.”

Gita concludes that she is in a very good place. “I often tell myself over and over, it’s been an amazing journey,” she says. DM