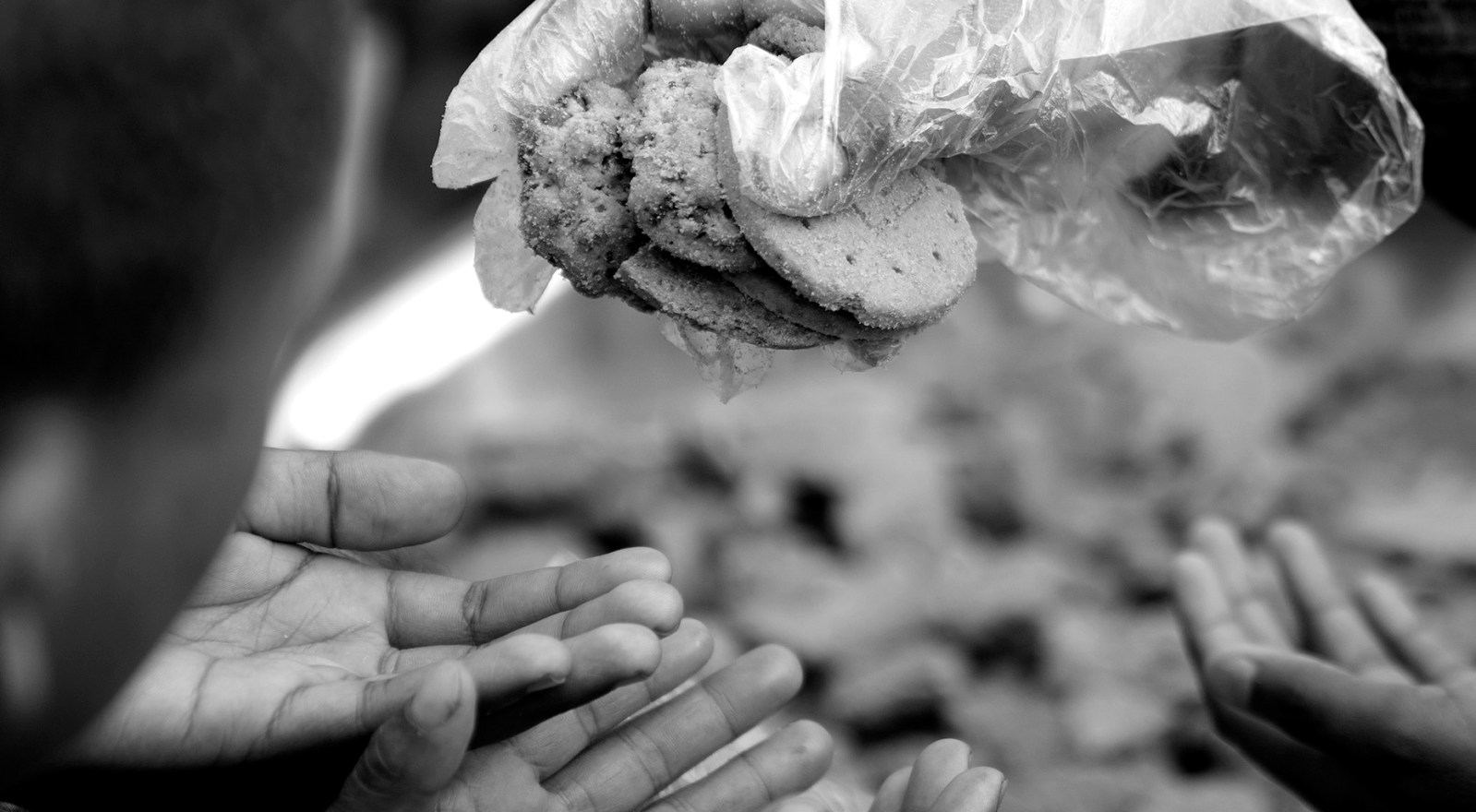 South African Child Gauge report concludes that there has been almost no improvement in the food and nutrition security of children living in South Africa over the past two decades. (Photo: EPA-EFE/NIC BOTHMA) epa08360734 South African children receive biscuits from the Groundbreakers community feeding program in Ocean View, Cape Town, South Africa, 13 April 2020. The Petersen family runs the Groundbreakers feeding program from their home in Ocean View which helps many vulnerable families in a community that is severely affected by gangsterism, drugs and crime. Many residents rely on the one meal a day they receive from Groundbreakers at this time due to unemployment. Donations for this feeding scheme are received at 21 Mzar Crescent Ocean View. The South African government has extended a total lockdown of the country until the end of April to try stem the spread of the coronavirus SARS-CoV-2 which causes the Covid-19 disease. (Photo: EPA-EFE/NIC BOTHMA)

South Africa has made little to no progress in eradicating the “slow violence” of child malnutrition in the past 20 years, according to the 2020 South African Child Gauge. Its 63 authors – and partners such as UNICEF and the Human Rights Commission of South Africa – are calling for government to take the report seriously. It calls for it to take action on malnutrition by increasing the child support grant, establishing the National Food and Nutrition Security Council and drawing up a roadmap of how the constitutional rights of children will be fulfilled. The government has taken note, according to a representative at the launch.

Each year, the South African Child Gauge is published by the Children’s Institute. It tracks progress towards the full protection of children’s rights. This year’s report was launched on 18 February and shone the spotlight on the “slow violence” of malnutrition and its intergenerational destruction. The report was dedicated to all those children who have had to endure this “attack”.

The report defines malnutrition as encompassing health problems caused by a lack of calories, nutrients or healthy food (referred to as undernutrition) or having food which is unhealthy (overnutrition). Undernutrition can result in stunting, wasting, underweight and deficiencies in micronutrients. Overnutrition on the other hand causes obesity, overweight and non-communicable diseases such as diabetes or cardiovascular disease.

The report concludes that there has been almost no improvement in the food and nutrition security of children living in South Africa over the past two decades. The indicators are “at best stagnant with many worsening”. The authors write that this is not unexpected given the country’s high inequality.

Food and nutrition insecurities “reflect a slow, hidden and cumulative violence against South Africa’s children that is in conflict with the country’s Bill of Rights and Constitution and is a violation of their rights,” the report reads. It is often experienced “in private, incremental and accretive ways – that are often invisible”.

Moreover, South Africa’s children face the double burden of undernutrition and being overweight.

The report found that stunting remains “exceptionally high” for a country with South Africa’s income, despite self-reported hunger of children declining. Children who are stunted are a low height for their age because of  “…impaired growth and development caused by chronic malnutrition, repeated infection and inadequate psychosocial stimulation”.

This rate has remained close to 30% since 1993, while countries such as Rwanda have decreased this level from 44% in 2010 to 38% five years later. There has been some improvement in wasting and underweight since 2003.

Micronutrient deficiencies are also of concern, despite public health strategies to forficate and supplement food. These deficiencies are caused by a lack of vitamins and minerals which are crucial for proper growth.

The report emphasises that childhood nutrition has repercussions for life. It, therefore, takes a “life-course approach” to nutrition. This recognises that there are critical moments in a person’s physiological development which require their own specific types of nutrition, according to the authors.

The first 1,000 days from conception to age two are crucial, as is the adolescent period which shapes adult behaviour and therefore the health of the next generation of children. Nutrition in one phase has repercussions for the subsequent stages.

As a result, food insecurity during childhood is a “silent threat” which impacts a person’s entire life and which “contributes towards the intergenerational transfer of poverty, malnutrition and ill-health”.

This insecurity “…is linked to the grotesque inequities that characterise the country and which must be addressed with urgency”. About 59% of children in South Africa live below “the upper-bound poverty line”.

These households have a per capita income of less than R1,183 per month and can meet a child’s basic and nutritional needs. The value of the Child Support Grant currently falls below the poverty line at R450.

The report was welcomed by the launch’s speakers, including the Vice Chancellor of the University of Cape Town Professor Mamokgethi Phakeng, First Lady Dr Tshepo Motsepe, Advocate Tseliso Thipanyane of the Human Rights Commission of South Africa, Muriel Mafico of UNICEF and Thulani Masilela, an outcome facilitator for health in the Presidency.

In her opening address, Motsepe thanked the organisations who helped the hungry during the pandemic but also acknowledged that “so much more needs to be done. We cannot turn our eyes away from images that mirror the gravity of hunger in our society. It is saddening to see people standing in long winding queues for food, as we have seen in media reports.”

She also emphasised that “our children’s right to food is stipulated unequivocally in section 28 of our Constitution that beyond health and development, adequate food is fundamental to children’s safety and security.”

She went on to say that: “We need our ministers responsible for the food and nutrition security of our country to uphold the commitments in our Constitution.

“We need to strengthen the food safety nets for children including our National School Nutrition Programme, and the Early Child Development subsidy, our campaigns for exclusive breastfeeding, our programmes of food fortification and food supplementation, and our social protection policies. And we need these to be effectively implemented and adequately resourced.”

She concluded by quoting one of President Cyril Ramaphosa’s recent addresses during the Covid-19 pandemic: “Although the words of our President were directed towards our national effort to contain the Covid-19 pandemic, they should also apply to our efforts to address child malnutrition: ‘Much is being asked of you, far more than should ever be asked. And we dare not fail.’ Let us become that society that ensures that no child goes to bed hungry.”

Mafico and Thipanyane committed to making the report central in the work of their respective organisations. Mafico emphasised that South Africa needs to accelerate its action urgently to meet international targets and that in the meantime malnutrition will cost the country dearly. Thipanyane hopes that government takes the report “very seriously” and that it informs the upcoming Budget speech.

The lead authors of the report reiterated the main policy recommendations. All policies should be “double duties”, according to the lead editor Professor Julian May, the director of the DSI-NRF Centre of Excellence in Food Security. This means using policies to address both undernutrition and overnutrition. The report asks for three things which can make a “huge difference”.

The first is to increase the child support grant to at least the food poverty line. “The evidence shows very clearly that increasing incomes will have an impact on a child’s nutritional status”, he explains. The current grants are “like a plaster on cancer” and 45% of South Africa’s households depend on them, said Chantell Witten, chairperson of the Child Health Priorities Association and the Nutrition Lead for the South African Civil Society for Women’s, Adolescent’s and Children’s Health.

The second is to implement National Food and Nutrition Security Council as envisaged by the national food security plan. It should be multi-sectoral, bridge government departments and include public and private sectors as well as civil society. Numerous speakers emphasised that this could be a “safe space” for these actors to negotiate and plan.

The authors would like to see a road map developed by government towards how the country will achieve its constitutional obligations towards children.

In addition, any interventions must be early and sustained, said Lori Lake, Communication and Education Specialist at the Children’s Institute. It is multi-pronged: it involves maternal nutrition, early childhood nutrition, breastfeeding, school feeding and regulating marketing. She called for children to be the heart of the country’s food system and response to Covid-19. “Children have not been seen in the last year… they have been excluded and silent”. She dedicated the report to those children.

The government welcomes the report ahead of its mid-term review of the national food security plan, according to Maselela. He said the report will be presented to 12 government departments and will they will discuss the recommendations. He did not give a timeline of when the council be will be established – it was meant to be in existence since 2019 – but said the national food security plan has already been translated into programmes since 2015. DM/MC.