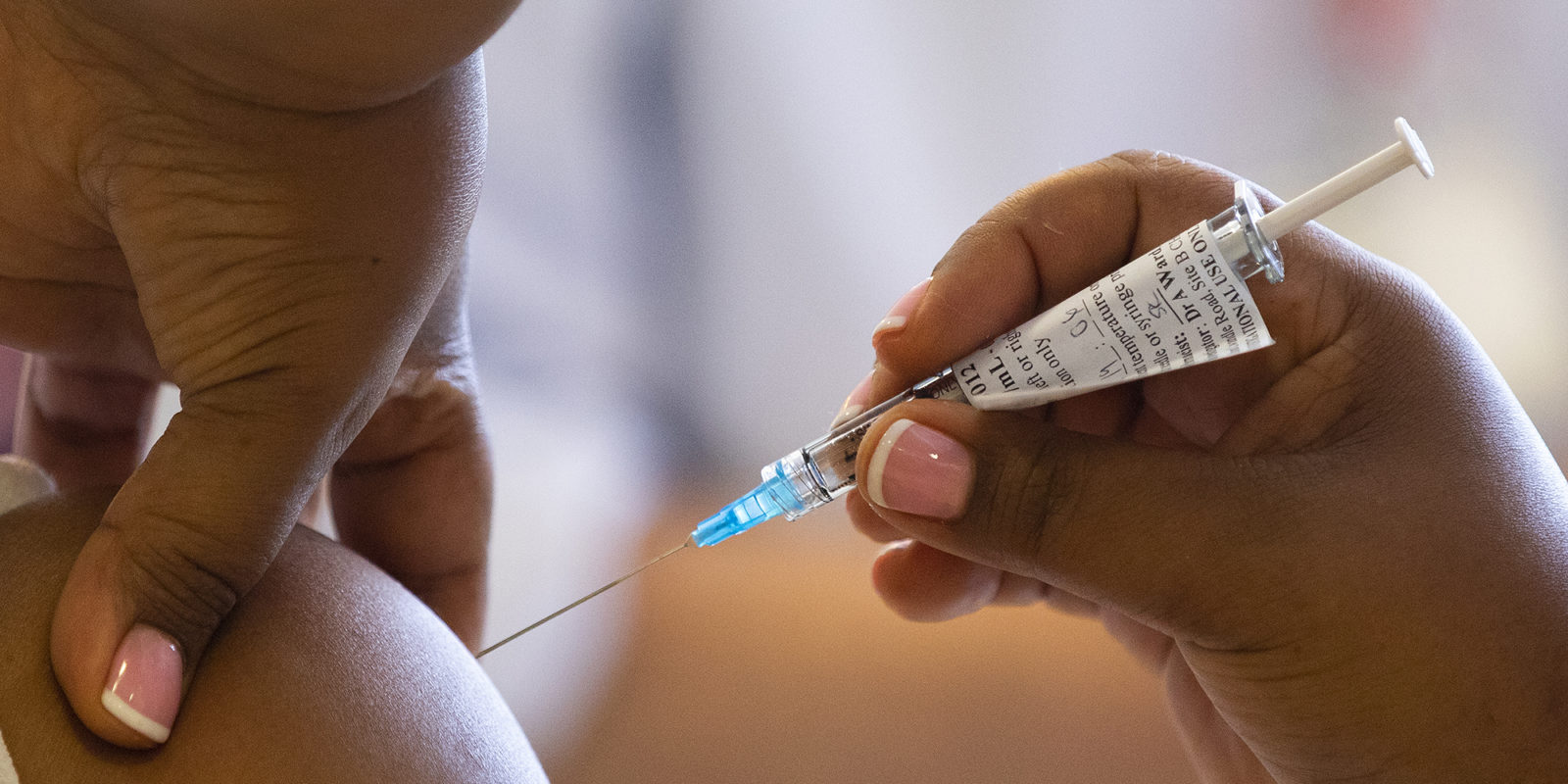 A health worker administers the Johnson & Johnson Covid-19 vaccine to a fellow health worker during the roll-out of the first batch of vaccines at Khayelitsha District Hospital, Cape Town, on 17 February 2021. (Photo: EPA-EFE / Nic Bothma)

Winter storms in the US continue to slow the vaccination drive, including in New York City, Florida and Puerto Rico. Anthony Fauci, the nation’s top infectious disease doctor, said inoculations have come to a “grinding halt” in some places. Massachusetts said it might send National Guard troops to pick up its next vaccine shipments.

France is committing to donate 5% of its secured vaccine supplies to poorer countries. Vaccine makers will begin testing their shots with pregnant women, in a bid to provide reassurance that they are safe for expectant mothers.

France to donate 5% of vaccine to poorer countries

France is committing to donate 5% of its secured Covid-19 vaccine supplies to poorer countries through the World Health Organisation-backed Covax programme.

A multilateral approach via Covax — a global alliance many developing nations are relying on for inoculations — is the most efficient way to show solidarity, a French official who asked not to be named in line with protocol, said on Thursday.

France hopes the US will make financial commitments on vaccines during a Group of Seven summit on Friday, the official added.

Massachusetts governor may send troops to get vaccine

Massachusetts Governor Charlie Baker said he’s considering sending National Guard troops to pick up the state’s next vaccine shipments to avoid any delay from bad weather. He said the doses are warehoused in Tennessee and Kentucky.

“We got told last night that we might see a significant delay in our next shipments,” the Republican governor told the Greater Boston Chamber of Commerce, according to the Boston Herald. “We can’t afford to go what will be almost a week without getting any new doses from the feds, and continue to maintain the appointment schedules that people here expect and anticipate.”

The country’s inoculation drive is without parallel globally with more than 45% of the population receiving a first vaccine, but it has faced criticism for not offering jabs to millions of Palestinians who live under its control.

In an update by public health officials on Thursday, the government announced the pace of deliveries of both the Pfizer-BioNTech and Moderna shots is ramping up as of this week.

As many as 14.5 million of Canada’s 38 million people should be inoculated by the end of June, according to an updated timeline, up from the 13 million the government expected previously. Should vaccine candidates from AstraZeneca, Johnson & Johnson and Novavax win regulatory approval, the tally could climb to 24.5 million.

Anthony Fauci, the top infectious disease doctor in the US, said winter storms and bad weather have brought vaccinations to a “grinding halt” in some places.

He said he did not know the precise extent of the national slowdown, but said on MSNBC it was “a problem”.

“We’re just going to have to make up for it — namely, do double time when this thing clears up,” he said. Vaccines have been administered below the daily average of 1.6 million shots, measured over a week, for the past three days, according to the Bloomberg vaccine tracker.

Florida Governor Ron DeSantis said the Moderna vaccine shipment that the state usually gets early in the week could now arrive as late as Monday as a result of winter weather across the nation.

He had previously said it would take until at least today, but the best-case scenario now appears to be Friday.

“Because of the storms that we’re seeing throughout the country, it’s basically sitting in the FedEx warehouse,” DeSantis said on Thursday in Pinellas Park. “I don’t even think they can get into it because of everything.”

New York City Mayor Bill de Blasio said snowstorms and bad weather resulted in the loss of several days of vaccine supply, as well as the delayed opening of two vaccination sites. He said 30,000 to 35,000 appointments had to be held back and that initial deliveries of this week’s doses may not start until Saturday or Sunday. Usually, the city receives deliveries on Tuesdays or Wednesdays, De Blasio said. Officials said vaccine sites remain open today and that appointments for people getting their second shots won’t be impacted, but that in many cases it has had to stop scheduling new appointments. The city has administered 1.4 million vaccinations since it began its inoculation drive in December.

In a bid to decrease the disparities among New Yorkers getting the vaccine, de Blasio said the city has sent out 250 canvassers to the hardest-hit communities and public housing sites to help people sign up.

Montenegro gets shots from China

China is donating 30,000 Sinopharm vaccines to Montenegro, the tiny Balkan country struggling to start inoculations against Covid-19, the government in Podgorica says in an email. Delivery of shots is expected soon, the Montenegrin government said, a day after the former Yugoslav republic received another donation, 2,000 Russian-made Sputnik V vaccines, provided by neighbouring Serbia.

Puerto Rico said it was pushing all first-dose vaccinations scheduled for this week until 3 or 4 March. Those receiving their second dose this week, however, will not see a change in their schedule.

Plunging temperatures and power outages in the southern and eastern United States have disrupted vaccine delivery, Health Secretary Carlos Mellado said in a statement. The US territory of 3.2 million people has administered about 399,711 doses of both the Moderna and Pfizer-BioNTech vaccines.

“Unfortunately, the weather is unpredictable,” he said. “We will continue to monitor the situation and concentrate on guaranteeing the second dose.”

Saudi Arabia has the capacity to give 200,000 Covid-19 vaccinations a day and aims to deliver 1.4 million doses every week, according to a government minister.

Saudi Arabia has administered about 1.4 vaccine doses per 100 people — 460,000 shots for a population of about 34 million — at a much slower rate than in the neighbouring United Arab Emirates. The kingdom has reported more than 370,000 coronavirus cases and 6,000 deaths.

South Africa told it can use Pfizer shot

South Africa can press ahead with the use of the Pfizer-BioNTech Covid-19 vaccine in the wake of a study showing how it stimulates neutralising antibodies against the locally dominant coronavirus variant, according to the Africa Centres for Disease Control and Prevention.

In an online briefing, Africa CDC Director John Nkengasong said “what we are seeing based on the studies is not huge changes in neutralising the antibodies of this virus”.

The lab-based study of the Pfizer-BioNTech shot showed it stimulated roughly two-thirds lower levels of neutralising antibodies against the South African variant.

Covid vaccine developers are set to begin trials for pregnant women, looking to provide reassurance that the shots are safe.

Pfizer and BioNTech are starting trials for their messenger RNA vaccine in 4,000 women in the latter stages of pregnancy, according to the US online clinical trial registry. AstraZeneca and Johnson & Johnson are planning to run trials in the coming months.

Until now, pregnant women have been excluded from vaccine studies even while they are more vulnerable to severe Covid-19. Some studies have also linked the disease to premature birth.

The UK airline industry stepped up a campaign to persuade Prime Minister Boris Johnson that travel should be included in his plan to reopen the economy, calling for a clear road map to ease travel restrictions ahead of the crucial summer season.

Heads of carriers including EasyJet and Virgin Atlantic Airways stressed the importance of the sector to the economy and employment. Overseas trips are effectively banned for most British people under lockdown rules, while incoming travellers are forced to take multiple Covid-19 tests and, in many cases, mandatory hotel quarantines.

Hungary registered 2,853 new cases on Wednesday, the most in six weeks, with officials warning of an increase in infection rates due to the spread of a more contagious variant. Prime Minister Viktor Orban has pledged not to tighten restrictions, which include a daily curfew and the closure of restaurants and cultural venues.

The government is hoping expedited deliveries of vaccines from China and Russia, on top of shots bought via the European Union, will allow a gradual easing of lockdown measures from April.

Government parties in the Czech Republic, which is in the middle of one of the fastest-spreading and deadliest coronavirus outbreaks in Europe, are arguing over a plan to reopen shops and schools.

Hospitals have about 1,200 patients in serious condition, the highest number so far, and there were 148 free ICU beds left in the country of 10.7 million as of Thursday morning. Since the start of the pandemic, 18,739 people have died because of Covid-19, about half in the past two months.

Almost a year after the World Health Organisation declared the coronavirus a pandemic, global infections show signs of slowing. There were 2.7 million new Covid-19 cases in the week ended 14 February, the lowest since October, according to data from Johns Hopkins University. That resulted in a 2.5% increase in total infections from the previous week, the weakest gain since the start of the pandemic and less than half the rate seen a month earlier.

The death toll is also beginning to ease, but at a less dramatic pace. Daily fatalities have averaged less than 10,000 over the past five days, down from a peak of more than 18,000 in mid-January.

National prevalence of the virus was down by two thirds in the first half of February compared with January, according to a survey by Imperial College London and Ipsos Mori, one of the country’s largest coronavirus studies. The number of infected people fell to 51 per 10,000 at the time of the latest survey in February, down from 157 per 10,000 in January.

Signs that a national lockdown is curbing the pandemic is welcome news for Johnson, who is under pressure to ease restrictions and help the UK economy rebound from its worst recession in 300 years. Johnson is due to set out a “road map” for easing the rules on 22 February. DM