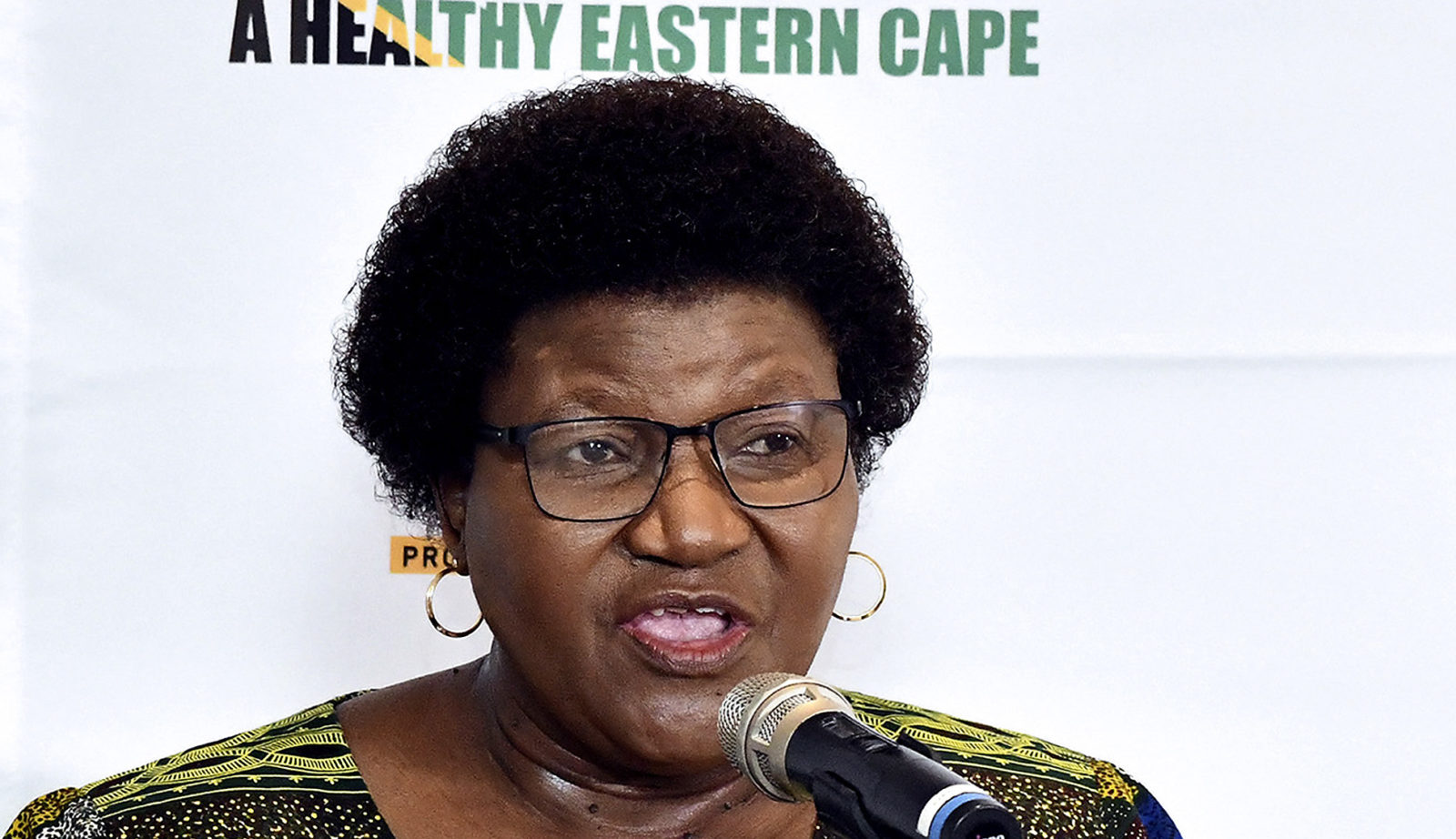 The Special Investigations Unit claims their first scalp in the Eastern Cape as Premier Oscar Mabuyane, “relieves” MEC for Health, Sindiswa Gomba of her duties to focus on criminal case against her.

Confronted by a push from the Special Investigations Unit (SIU) for action and renewed charges of her alleged involvement in fraud with the money set aside for the late president Nelson Mandela’s funeral, a worried-looking Eastern Cape Premier Oscar Mabuyane fired his Health MEC, Sindiswa Gomba on Thursday morning.

He said he did so to allow Gomba time to prepare for the criminal case brought against her relating to the Mandela funeral funds.

Mabuyane said the SIU had recommended that he take action against Gomba and the former head of the Department of Health, Dr Thobile Mbengashe for their part in the R10-million scandal-riddled procurement of medical scooters for the province.

Gomba was “relieved” from her duties, he said but a disciplinary hearing will be held to determine Mbengashe’s fate.

A seemingly desperate Mabuyane however continued to defend Gomba calling the findings of the SIU an “unfortunate incident.”

He has been very loyal to Gomba throughout her often disastrous tenure as Health MEC that resulted in the Minister of Health, Dr Zweli Mkhize, having to send in a project management team to take over the Covid-19 response in the province.

“She has tried her level best. Knowing the historic challenges in the department, she was coming right. She was dealing with core fundamental issues. It was unfortunate that something of this nature happened.

“There was no dark cloud when we appointed her. There was a silver lining,” he said, answering a question why she was appointed despite having previously been charged with fraud and other criminal charges over the misuse of funds that the Buffalo City Metro had set aside for the funeral of the late president Nelson Mandela. At the time the charges against her were provisionally withdrawn.

Mabuyane also spent some time bemoaning the fact that the Mandela Funeral Funds case has taken so long.

He said Gomba will remain on as an ordinary member of the provincial legislature.

“She was hands-on, emphatic and dedicated. She made a lot of sacrifices,” he said adding that the MEC got Covid-19 while she was performing her duties.

The medical scooters, that were to be used as mobile clinics, were controversially procured with Covid-19 funds, even though the decision to procure them was taken before the outbreak of the Covid-19 pandemic in December 2019.

While the department denied it, the SIU says the initial plan was to procure both mobile clinics and ambulances.

The contract was halted by the Special Tribunal in September last year and no money had been paid to the winning contractor Fabkomp.

On 22 April the Special Tribunal will hear an application by the SIU to have the contract cancelled.

Gomba also appeared in court last week after the National Prosecuting Authority reinstated charges against her and 14 others for allegedly looting funds from the Buffalo City Metro meant for the funeral of Nelson Mandela. Gomba was a councillor there at the time of Mandela’s death on 5 December 2013.

It is the State’s case that Gomba and three councillors used their positions and influence to set in motion a scheme designed to defraud the municipality and to misappropriate (for the benefit of party and personal interests) municipal funds earmarked for the transportation of mourners to venues where memorial services were to be held.

Prosecutors alleged that two senior officials in the metro had worked with Gomba and the councillors “with the intention to defraud and manipulate the procurement processes”.

They were all released by the East London regional court on R1,000 bail.

They were charged with Vazi and Mati’s respective companies, Forty Wings Lodge CC and Mpidos Emergence and Training CC. Another suspect, Dean William Fanoe, whose company, Mantella Trading 522 CC, will also be charged, did not appear in court as he is adhering to Covid 19 protocols.

In December 2014, businessman Mzwandile Sokwali and his company, Victory Ticket, who was the “winning bidder” in the scheme, pleaded guilty to fraud and money laundering after entering into a plea and sentence agreement with the state. He was fined R100,000, with R50,000 suspended, and sentenced to five years’ imprisonment wholly suspected for five years.

The matter was postponed to 5 March 2021 for the defence to obtain copies of the docket and for the rest of the suspects to appear in court.

A spokesperson for the National Prosecuting Authority, Sipho Ngwema said on Friday that they were ready to go to trial.

According to evidence before the Special Tribunal relating to the scooters, chief forensic investigator Glenn Muller describes in an affidavit how witnesses told him that Gomba had been actively involved in the procurement process and had made phone calls to senior health department officials “to speed up” the process and to berate them for blocking the procurement.

He said the first decision to procure motorcycle clinics and ambulances for the rural part of the province was taken in December 2019 in a meeting chaired by Gomba.

“Although this meeting dealt with an important departmental procurement, there were no minutes taken to record the discussions and resolutions. I have asked for a copy of the minutes from the department’s officials and I was informed that they did not exist,” he said.

“The MEC who has no role in procurement matters, played an instrumental [part] in directing how the transaction should be handled,” Muller said, adding that the transaction was pushed through “hastily and inappropriately on the MEC’s instructions.”

The MEC for Cooperative Governance and Traditional Affairs, Xolile Nqatha will be acting as Health MEC for now, Mabuyane said. DM/MC

Like what you’re reading? Sign up to the Maverick Citizen newsletter and get a weekly round-up sent to your inbox every Tuesday. Free.

Global Virus Update: Fauci says US cases too high; Cuomo under fire; 52 deaths reported in SA — bringing the total to 49,993

Frank Chikane’s three-minute sermon about Palestine was a prophetic warning, not a declaration of war