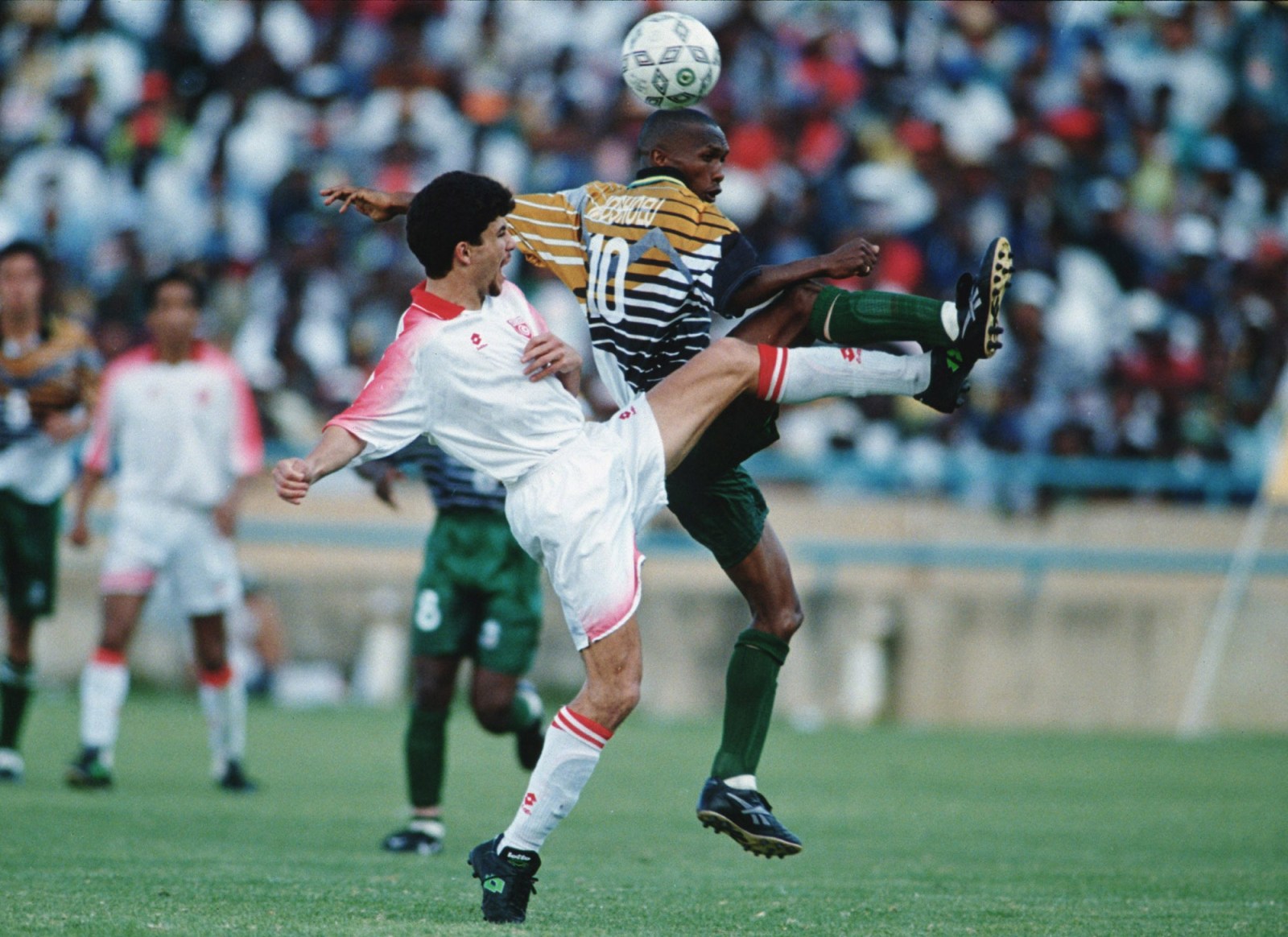 A quarter of a century on, South Africa’s iconic Afcon triumph remains the high point for Bafana Bafana.

February 2021 marks a quarter of a century since Bafana Bafana’s historic win at the 1996 Africa Cup of Nations, a victory that the then captain of the national team, Neil Tovey, says they never dreamed of achieving going into the tournament.

“We were getting better as a team every single year [since readmission]. In 1995, once we knew that we were hosting, we played some really good teams. We played Argentina and we drew 1-1. We played Germany and we drew 0-0. Those were top teams,” he said.

“So, yes, we were a confident bunch. We felt good in our game. But I don’t think any of us could have anticipated winning the competition at that stage.”

The team had only played together for a short period, with world football governing body Fifa lifting SA’s expulsion from the international stage in 1991 as the racist system of apartheid was finally abolished.

The Springboks’ world-conquering victory in the 1995 Rugby World Cup had given the team buoyancy. They felt they needed to maintain the high spirits of the country following the 1994 elections, as well as that iconic Bok triumph.

“At the time we knew we’d achieved something really great. But we didn’t know how big it was. We were new to the Africa Cup of Nations. The enormity of the tournament, the extent of how difficult it is to win that tournament… we hadn’t really got that. We had no idea,” said Tovey.

Mark Williams, hero of the final game, pinpoints the impact that newly elected president Nelson Mandela had in fostering self-belief within the team, for the duration of the tournament.

“We wanted to make sure, as players, we gave that back to our country and the people that supported us.”

In the group stage, Bafana were pitted against two African football giants in Cameroon and Egypt, as well as a tricky Angolan side. An emphatic 3-0 victory over the Cameroonians was the perfect start for the tournament newbies.

“The victory against Cameroon was huge, absolutely huge. In our group we had two past winners [of Afcon] in Cameroon and Egypt, and a really tough opposition in Angola,” Tovey said.

“After winning so emphatically against Cameroon, and giving a really good performance, it set the tone for our tournament. And it really demoralised Cameroon, which actually got them out of the tournament. It was a really good starting point for us,” he added.

The win not only galvanised Clive Barker’s charges, but it ensured that one of the favourites coming into the tournament capitulated and crashed out. It also served as a warning for other favourites such as Ghana and Tunisia to be wary of the little-known Bafana Bafana.

Having dispatched Algeria in the quarterfinals, the team went into its semifinal game against a star-studded Ghanaian side with a spring in its step, but also careful of not being overly confident – despite finding themselves in previously unimaginable territory.

The Ghanaians on the other hand were oozing confidence. They were undefeated in the four games leading into the semis. They’d netted seven goals and conceded just one. They also had one of the superstars of African football at the time, Abedi Pele.

“I remember some of the Ghana players calling Doctor Khumalo [the night before the semi-final] and saying they are going to turn him from a doctor to a nurse. But then Doctor showed them what he was really about,” Williams said.

Khumalo was one of the stars of the tournament, and his contribution included providing an exquisite assist with a defence-splitting pass for Phil Masinga to open the scoring a few minutes into the first game of the tournament.

Bafana vanquished Ghana 3-0 and claimed yet another scalp of an established African giant, further fuelling the belief and confidence of the team, with North Africans Tunisia waiting in the final.

Williams, who started the final on the bench and went on to score both goals as Bafana won 2-0, says throughout the day of the final, he was in a trance-like state. This, after a short but profound exchange with Mandela during the president’s final 6am visit for the tournament.

“The president looked at me and said: ‘Good morning Mark. Today you’re going into war. No matter what happens, the nation is behind you.’ Then he hugged me. Those words will stay with me until I pass,” said Williams.

“After that hug Madiba gave me, I was there but I wasn’t there. It’s a feeling where you don’t know where you are actually. I only realised when I scored that first goal that ‘Williams, you are not dreaming, this is for real’.

“Then when I scored the second goal two minutes later, I looked up to Madiba in the stands and I saw tears of joy coming out of his eyes.”

The moment remains the crown jewel in South African footballing history and has not come close to being replicated, despite the fact that the current generation is far better resourced than that of 1996.

“The resources have to make it happen again. But we also had a very special bunch of players there, talent-wise. Not to say players haven’t had talent since, but above everything was the mentality of that team.

“That team could go through hardships and it could get out of it very quickly. It had the ability to make things happen when we needed it most. And that’s the difference,” Tovey said.

“You’ve got to have match winners that can turn around matches on their head when you’re up against it. To have the likes of Shoes (John Moshoeu), Doc, Mark Williams, Shaun Bartlett, Mark Fish… we had a squad of players that were huge in their own right.”

Williams emphasised that the knowledge of these outstanding players had not been put to good use since.

“We always talk about how we need to learn from other countries. But when it comes to coaching and putting the right technical staff there, I don’t see any of the players that won the Afcon in the Bafana setup. That already tells me there is something wrong,” said Williams.

In recent years, Bafana have either failed to qualify for Afcon altogether, or had underwhelming showings. They have not come close to matching the feat of the 1996 magical generation and look unlikely to do so any time soon. DM168