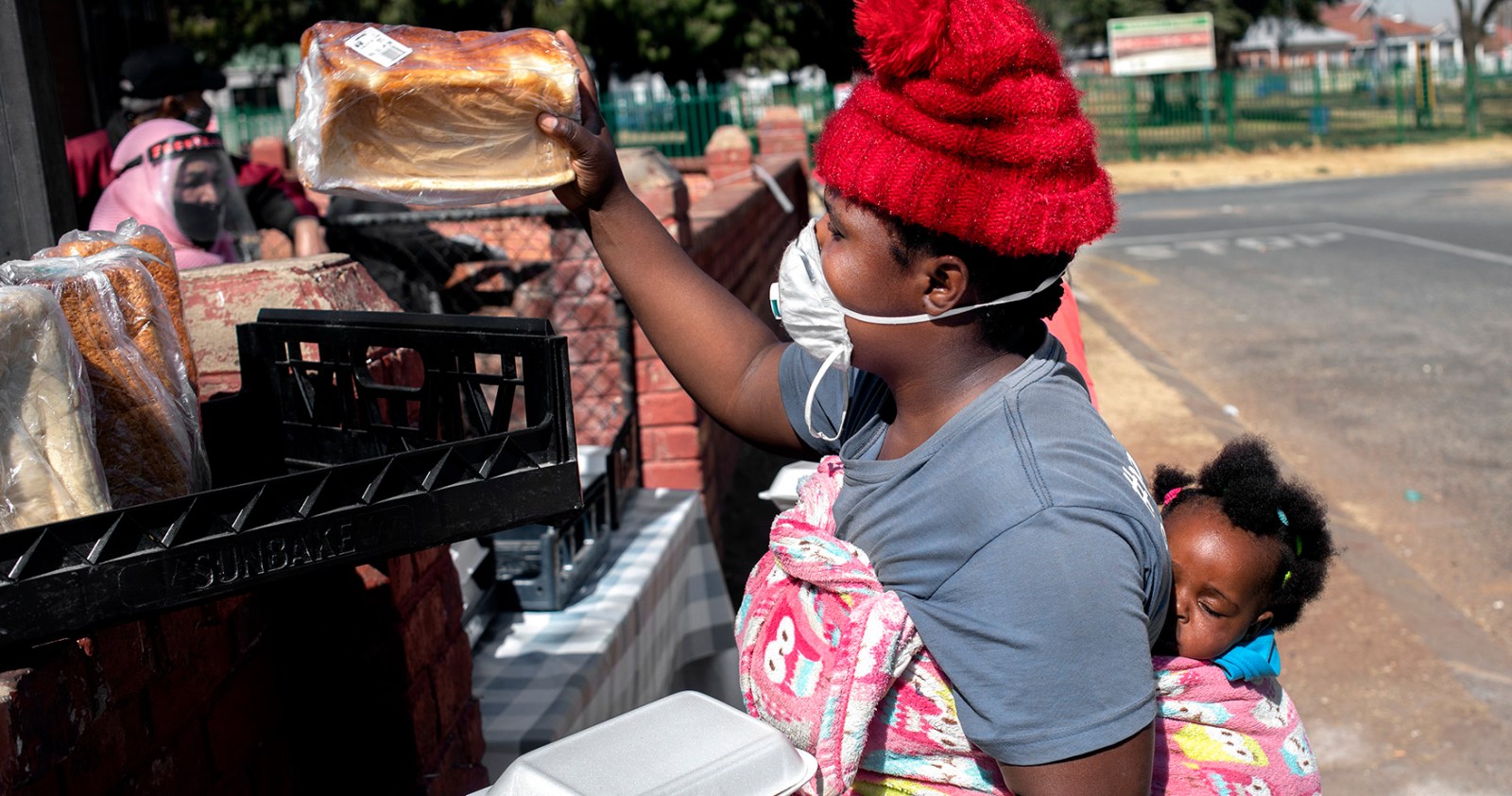 Women receive bread at a food handout during the Eid al Adha at the 'Hunger Has No Religion' feeding scheme, in Johannesburg, South Africa, 01 August 2020. The local Muslim community spent the time they would have shared with family celebrating Eid al-Adha by feeding hundreds who are facing food insecurity due to the effects of the 5th month of pandemic lockdown. Food insecurity is one of the main issues facing the country since the start of coronavirus pandemic lockdown. (Photo: EPA-EFE/KIM LUDBROOK)

The latest NIDS-CRAM survey shows a welcome trend but also reveals the government should not hastily end the Covid-19 grants.

By late 2020 the jobs market had staged a near full recovery to the pre-Covid-19 levels of February 2020, according to the latest National Income Dynamics Study – Coronavirus Rapid Mobile Survey (NIDS-CRAM) survey done by a coalition of leading researchers and universities. At the worst dip, the numbers suggested we had reached the point of more people being unemployed than employed, but that dim prospect has been turned around.

Employees did not always return to the same jobs, suggesting a change in the labour market or what the world of work looks like in South Africa. “Of those who lost their jobs in April, only half were employed again by October, while about a third of those who had jobs in October were unemployed in February 2020. This suggests substantial churning in the labour market, which no longer looks the same as it did before the pandemic inspired lockdowns,” says the survey.

The services sector of the economy was growing fast, and job recovery was more robust for those with education.

The bounce-back was similar to other countries in the global South.

“Important sectors of the SA economy – mining, manufacturing, wholesale and retail – were making October 2020 sales at or above their February 2020 levels. A number of comparable countries also experienced ‘bounce-backs’ in employment (to varying degrees), including Brazil, Colombia, Ghana, India, Mexico and Uruguay,” says principal investigator Nic Spaull in a consolidated report.

The first waves of the research showed that between 2.6 million and three million people who lost their jobs were furloughed or placed on short-time.  As lockdowns eased people returned to work and for some earnings even increased, although the data are not deep enough to call a definite upward earnings trend. What is clear is that incomes were not reduced for those who returned to the labour market. The most vulnerable worker categories had smaller recoveries.

The downside is that the bounce-back was not significant enough to satiate the gnawing hunger the three research waves identified.

Children are suffering hunger seen at the strictest lockdown levels when livelihoods were lost overnight and families went hungry. “Child hunger has now increased across the country, returning to the highest levels of the hard lockdown in May 2020.” As relief in the form of grants poured into the most impoverished areas, hunger levels declined but bounced back as the government ended various Covid-19 grants.

“In November 2020 the top-ups to the child support grant and old-age pension had been removed. Up until the beginning of October 2020 child grant recipients received an extra R500 per caregiver in addition to R440 per child.”

Obviously, most of the children going hungry are black Africans whose caregivers run out of food before running out of month. Researchers are worried this could worsen when the monthly R350 social relief of distress fund is ended. President Cyril Ramaphosa extended the grant for a few months in his State of the Nation Address on 11 February.

The government is considering a basic income grant and the researchers have found that the Covid-19 grants have been well targeted, reaching the most impoverished South Africans.

More than 70% of South African adults live in a home that receives a government grant with pandemic grants. “The magnitude of food insecurity is still such that the need for social relief efforts remains undiminished and that the reduction and phasing-out of some of the social grants will have severe hunger consequences,” says the NIDS-CRAM paper on hunger by Servaas van der Berg, Leila Patel and Grace Bridgman.

Most South African households survive on an income mix that includes grants, some work and remittances from family. Even as employment income returned, the removal of grant income meant the number of people who said their purses emptied before month-end grew. By the latest survey, almost one in five households said a child had gone hungry in their home. “The current reality is perhaps not quite as dire in comparison to the period during the hard lockdown, but it remains a bleak picture,” says the survey.

Like many countries in the world, women bore the brunt of the economic collapse occasioned by Covid-19 and its lockdowns, which shut economies.  Researchers found women were less likely to receive unemployment grants – unemployment or social relief of distress – despite being more likely to be unemployed. And when the economy went from red to green, fewer women returned to the jobs market.

The strengthened jobs market is welcome, but it still returns us to a position where unemployment is still north of 40% of the economically active population, according to the expanded definition of employment which includes people who have given up looking for work.

The Edelman Trust Barometer released on 16 February shows that people surveyed are more worried about losing or finding a job than contracting Covid-19. The NIDS-CRAM team also confirmed that a mental health pandemic has ridden in the slipstream of the pandemic.

“Mental health in South Africa is deteriorating – between July and December 2020 there was a significant increase from 24% to 29% (of those surveyed) in the percentage of people screening positive for depression,” said Spaull. DM/MC