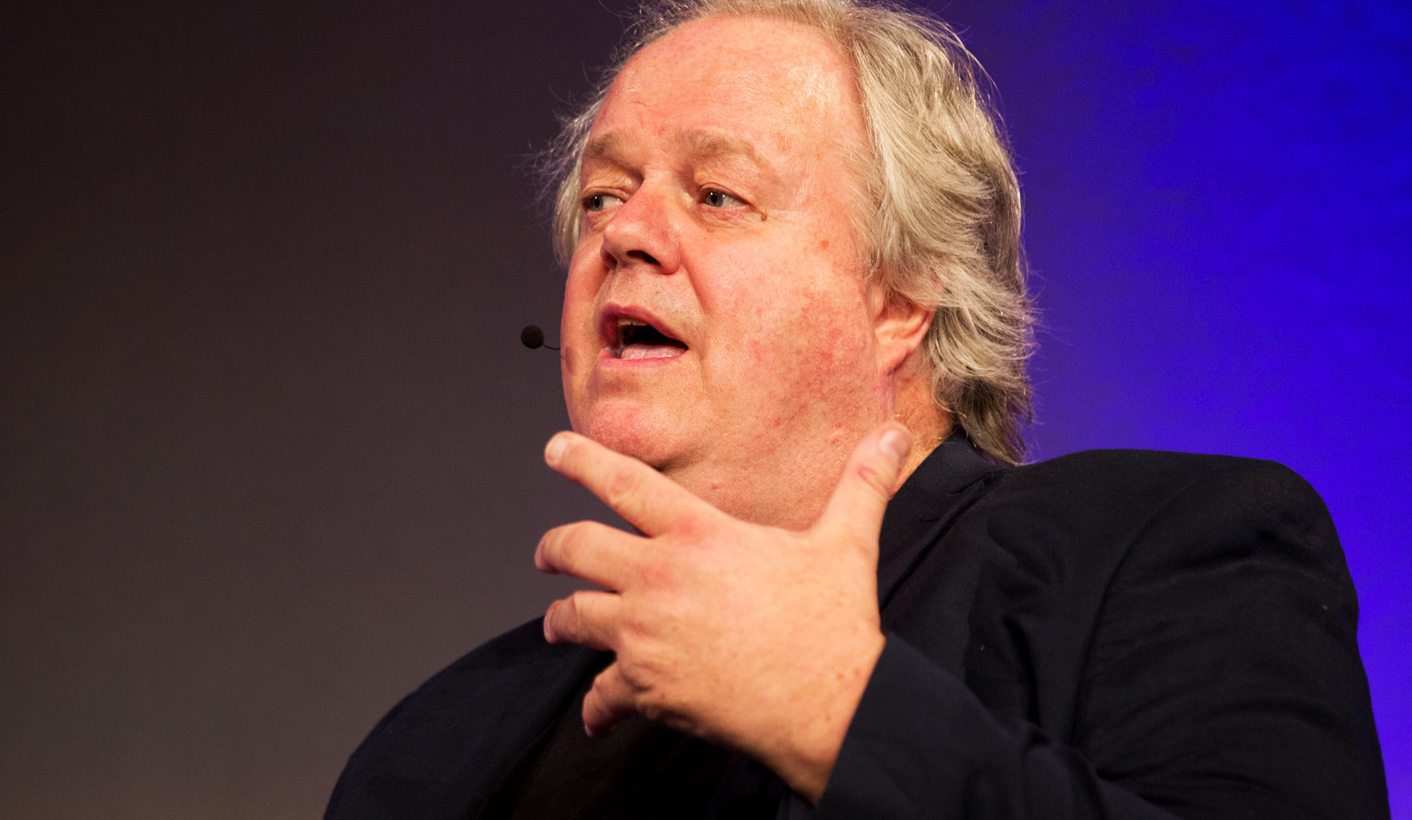 What adds to the egregious act by Jacques Pauw is that the conduct he alleged is sadly all too common. Photo: Jacques Pauw at The Gathering

The investigative journalist hasn’t just caused potentially great harm to those in the story, he has destroyed his own credibility and undoubtedly inflicted great damage on the credibility of Daily Maverick.

Last week, Daily Maverick ran a piece by Jacques Pauw – a horrific personal account of what seemed to be a wrongful arrest, false accusations of theft and degrading treatment. On Tuesday, Pauw did an about-turn and published a personal apology for the piece.

It seemed he had got many of his facts wrong/distorted, he had been responsible for his behaviour that led to his arrest, as he was drunk and disorderly, and the police hadn’t stolen his money, as he alleged. He also retracted his vaguely worded accusations against the unnamed restaurant and waiter. There remain some questions, about the charge of theft that was laid and what happened to the R1,000 that was stolen but wasn’t. What is clear is that key facts about his story were either wrong or simply made up. Pauw hasn’t just caused potentially great harm to those in the story, he has destroyed his own credibility and undoubtedly inflicted great damage on the credibility of Daily Maverick.

Here we have one of the country’s most well-known and respected investigative reporters – most prominently for his investigation of apartheid death squads and, recently, State Capture in The President’s Keepers – getting basic facts wrong. Not just wrong but so at variance with the original story that readers are still left with more questions than answers, and wondering what really happened – it was clear he was blind drunk at the time of the arrest, but was he also blind drunk four days later when he wrote the original article? Was he so drunk that he didn’t comprehend the facts even days later, or, more worryingly, was he rage writing? Using his privileged position to lash out and hurt others – the police, the restaurant and, worse, his poor waiter? People are understandably angry and feel let down. What is clear is that in making such egregious claims, Pauw has destroyed his credibility, his apology notwithstanding.

It is interesting to see how those who have it in for him and Daily Maverick are seemingly gleeful and expressing righteous outrage at the debacle.

The starting point of the criticism is asking why Daily Maverick published the story to begin with. Hadn’t they bothered to check the facts on such serious allegations? But many are missing that the following was published at the end of the original article: 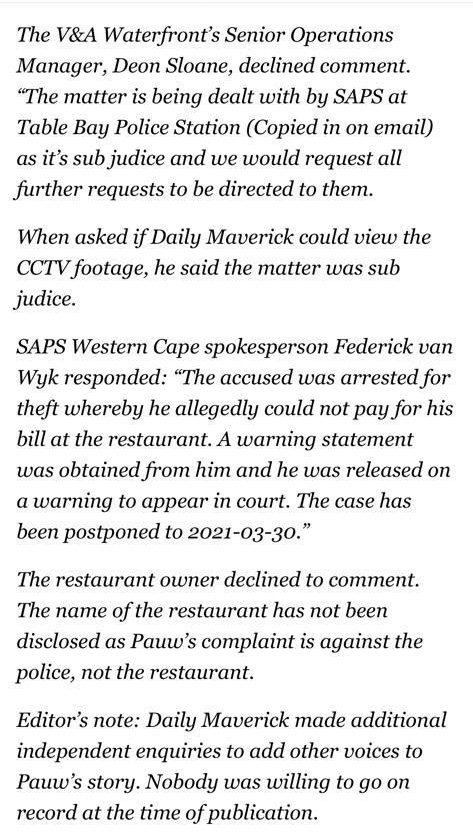 What this suggests is that Daily Maverick had sought to verify the story, they had accessed the V&A Waterfront, the restaurant owner and the SAPS, who confirmed in their response that there had been a charge of theft. Further, subsequent to the apology, Daily Maverick published additional comment: “Prior to publication, Daily Maverick interrogated some of the elements in Pauw’s column with him and edited it accordingly where appropriate. Although Pauw admitted he had been drinking, he assured Daily Maverick his version was correct and he pointed to the waiter’s statement to police as corroboration. Once published, we continued our investigation and obtained the CCTV footage.”

Given that the sources didn’t deny the events, and that the SAPS verified the charge, and that they had been given assurances by the author that his version was correct, it seems reasonable steps were taken to verify before publication. Despite this, Daily Maverick still needs to accept responsibility for the piece, and we call on Daily Maverick to also apologise for their role and the harm caused and to set out what internal steps will be taken on this serious violation of public trust on Pauw’s part.

What adds to the egregious act by Pauw is that the conduct he alleged is sadly all too common. There have been too many reports and in the original article, if we recall correctly (it has since been removed), figures around violations by police officers were highlighted. Police brutality and wrongful arrest, according to experts, are not uncommon and in most instances don’t make national media, except in a few extreme cases. Pauw was thus able to use his power, to leverage his reputation as a respected journalist and a white man, to ensure his traumatic experience was heard. In having deceived the public about the events, not only has he destroyed his own credibility, but he has also undermined the veracity of those less powerful who have been victims of police brutality and wrongful arrest.

Some senior journalists at the SABC are pointing fingers at Media Monitoring Africa, accusing us of hypocrisy because we laid complaints against the SABC at the BCCSA and at the Press Council for their journalists’ self-interested Ace Magashule interview in November. The two cases are distinguishable not because of the self-interested, unethical conduct of the journalists (they are similar although Pauw’s is far more egregious because of the mendacity of the first account) but because of the reaction of the media houses. We laid the complaints against the SABC only after it became clear (despite repeated requests by us) that the SABC was going to ignore the issue and refuse to publish any explanation/apology for the conduct of its news staff who have still not apologised for their own misconduct.

By contrast, Daily Maverick has, thankfully, gone much further in providing a detailed explanation of the circumstances surrounding publication and has apologised.

Editor’s note on retracted Jacques Pauw column about his arrest at the V&A Waterfront, and an apology to our readers

If there is any silver lining to these clouds over journalism it is that it has reminded us all that when journalists get it wrong, particularly if there is a sense it might be deliberate, they don’t just get it wrong and do damage to themselves and their reputation, they also undermine the credibility of the institutions they work for.

Pauw has undermined the credibility of himself, his publication and journalism and has contributed to further erosion of trust in our media. Despite this, credible media – including, and especially, entities like Daily Maverick and the SABC – could not be more critical to our democracy. DM