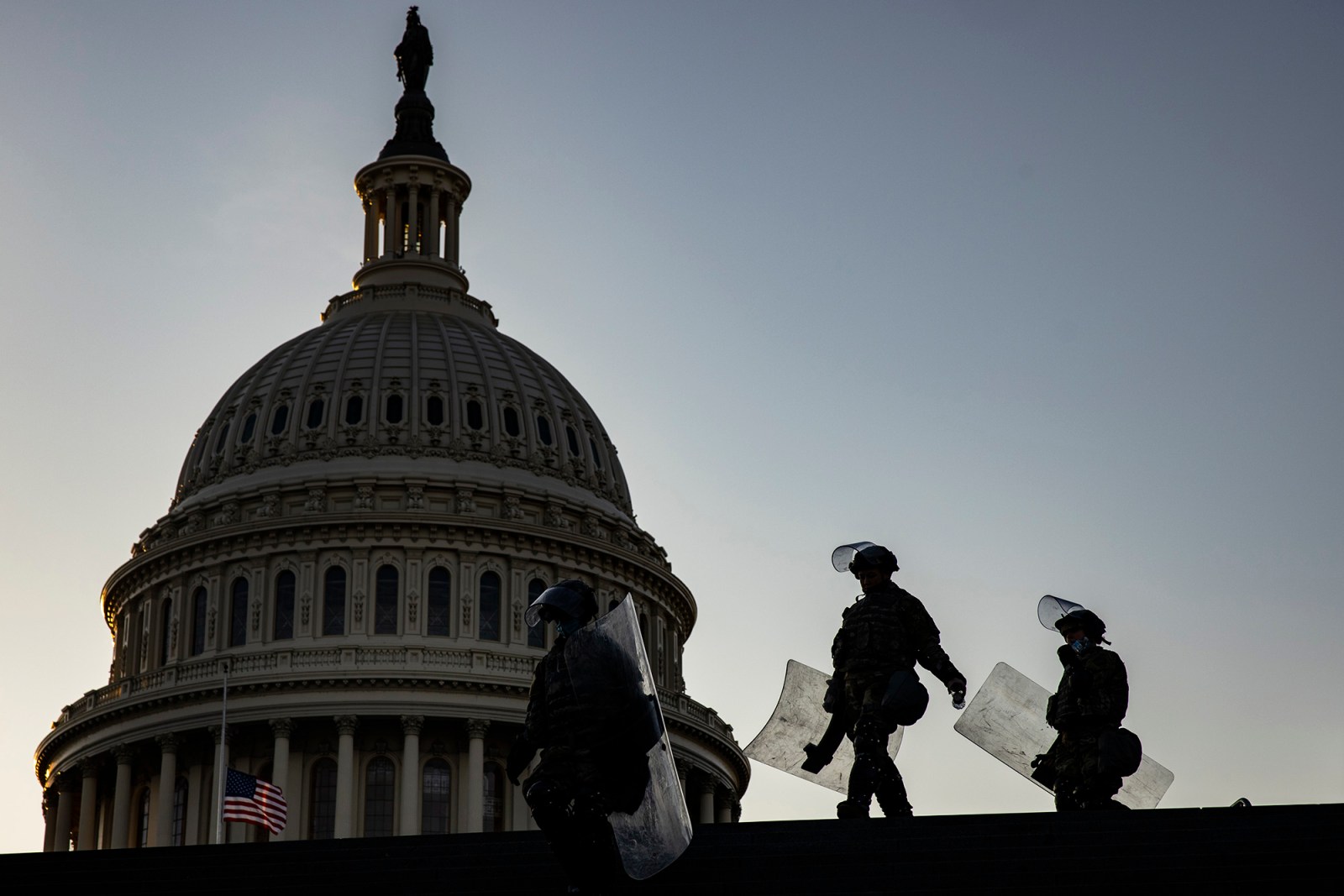 National Guard soldiers with riot shields head to the Capitol Visitors Center after being deployed to secure the grounds around the US Capitol building in Washington, DC, USA, 13 January 2021. US President Donald J. Trump has become the first sitting President to be impeached twice after he incited a mob of his supporters to riot on the US Capitol in an attempt to thwart Congress from certifying Biden's election victory. At least twenty thousand troops of the National Guard will be deployed in Washington by the end of the week to help secure the Capitol area ahead of more potentially violent unrest in the days leading up to the Inauguration of US President-elect Joe Biden. EPA-EFE/SAMUEL CORUM

The first legal action against the former president around the 6 January riot was filed on Tuesday. The suit is brought by Congressman Bennie Thompson and the National Association for the Advancement of Colored People.

The legal action against Donald Trump – the first federal lawsuit accusing him of inciting the mob in the 6 January overrunning of the Capitol – invokes what is commonly known as the Ku Klux Klan Act – the Civil Rights Act of 1871, Section 1985(1). Trump’s then legal representative and former New York mayor, Rudy Giuliani, and the alt-right extremist groups the Proud Boys and the Oath Keepers are also named as defendants.

The two men are accused of conspiring with the two extremist groups. Mississippi Representative Thompson also chairs the Committee on Homeland Security. He said the intent of the lawsuit is to set a standard:

“If you disagree in America with the outcome of an election, you don’t riot, you don’t do anything other than see that individual at the next election… In America we settle our differences at the ballot box. We don’t have coups. We don’t have riots,” he said.

The filed document states: “The Defendants conspired to prevent, by force, intimidation and threats, the Plaintiff as a Member of Congress from discharging his official duties to approve the count of votes cast by members of the Electoral College following the presidential election held in November 2o2o.” See the full brief here.

The association also says at least three more members of Congress plan to join the action as plaintiffs.

Trump’s acquittal last weekend remains a talking point around the world, as is the fact that the Senate minority leader, Republican Mitch McConnell, said after the trial there was no doubt in his mind that Trump was guilty of whipping up the violence that erupted at the Capitol.

Trump has, meanwhile, released a statement in which he, true to form, blasts McConnell: “The Republican Party can never again be respected or strong with political ‘leaders’ like Sen Mitch McConnell at its helm.” He adds that McConnell lacks “political insight, wisdom, skill and personality… a political hack”.

Eric Bjornlund of Democracy International – a US-funded organisation that assists and educates people and institutions internationally on democracy and democratic practices and processes – says of McConnell’s vote to acquit and subsequent statement saying Trump is guilty: “Disappointing and I think it’s disingenuous… I think it’s an attempt to try to stay the leader of the Republican Party in the Senate and to stay as one of the major national leaders of the Republican Party… his speech was acknowledging that he knew that Trump’s actions were horrific and that he was guilty of incitement, but since the majority of his party in the Senate and perhaps the majority of the party supporters in the country… don’t view it that way, his best bet was to come up with a way to vote to acquit.”

McConnell had wanted to hedge his bets – to “have it both ways” – and do what he could “to try to hold off the very pro-Trump, anti-democratic point of view that’s taken hold of the party”.

According to Bjornlund, Republicans who voted to acquit Trump were voting against accountability for incitement to violence, and for Trump’s “Big Lie” that the election had been stolen from him. He believes this does not bode well for the future: “I think it’s a bad sign for democracy. I think its a huge challenge for democracy and we have to be extremely worried about what’s going to happen over the next few years.”

The Guardian is just one of many media organisations to publish articles  after the attack on the Capitol, echoing many political commentators in saying Democracy in America has long been under threat.

Journalism professor emeritus David Hazinski says a number of factors led to the current fracture in the US, and the media and the government play lead roles in why Trump’s base would rather believe the former president than anyone else.

“I think they hate their government; they see it taxing them and regulating them and giving them absolutely nothing – they say this. And I think that’s the fault of a couple of things. One is the media, which has allowed this propagandising from the right to go on for essentially two decades without any opposition. It has been a one-sided argument with no answer from the other side. Commercial media has focused on making money, singularly, not on defending itself from these attacks.”

The government only had itself to blame for people thinking that all it does is take their taxes and give nothing back.

Hazinski says that while the mainstream media have shown a lot less of what government does, interviewing people (talking heads) rather than showing programmes at work – because it is easier, cheaper and less time consuming to shoot an interview than to produce a complete story showing how a programme works and who benefits from it – the government and its agencies also have not bothered to explain what they do to people. Or have not been any good at it.

“I occasionally work with the FBI and US Fish and Wildlife Service. I mean, they write press releases for lawyers – no mortal can read them. And they try to stay out of trouble and they try to stay invisible. Well, they’ve been invisible, people don’t see government, they don’t see what it’s doing so all of these things contribute to this narrative that Donald Trump et al are more than happy to speak.”

Journalists and journalism in the US needed to work to regain audience trust, he said.

“Journalism itself… has refused to accept ethics as a blanket, refused to have mandatory education. Anybody can call themselves a journalist. It’s much harder to get certified as an air conditioning mechanic than it is as a journalist.

“News media have to expose their processes. They have to prove to the audience that they are telling the truth. It can no longer be acceptable – taken for granted – that the media are really unbiased… they have to show why they are better and more trustworthy than someone screaming on the internet.”

Hazinski says people are taking advantage of opportunities created by bad journalism and that the media must be able to show they are dealing in facts, because: “You can’t out-propagandise people who are propagandists.” DM