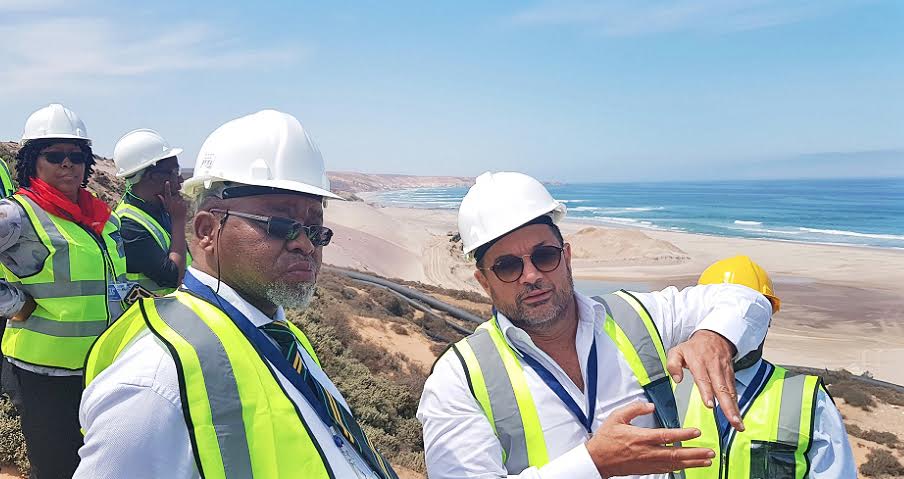 Australian mining boss Mark Caruso (right) with Minister of Mineral and Energy Resources Gwede Mantashe during the minister’s visit to the Tormin mineral sands mine on the West Coast in February 2019. (Photo: DMR)

A criminal charge of aggravated home burglary has been dropped against Mark Caruso, an Australian venture capitalist with strong South African mining links. However, two charges of assault also stemming from an incident in his home state in Australia last year are still pending against Caruso.

This was confirmed to GroundUp by Jamie Freestone, manager of media and public liaison for the courts of Western Australia, who said Caruso was due back in court on 5 March in connection with the assault charges.

Caruso is a senior executive of Australian Securities Exchange-listed mining company Mineral Commodities Ltd, commonly referred to as MRC. MRC is the parent company of two South African mining subsidiaries: Mineral Sand Resources (MSR) that produces heavy minerals from West Coast beaches at its Tormin mine near Lutzville, and Transworld that has been attempting to develop a titanium mine at Xolobeni on Pondoland’s Wild Coast for more than a decade.

In October last year, Perth-based Caruso temporarily relinquished his position of executive chairman of the MRC board but retained his position as chief executive while he set about defending himself against the three sets of charges.

According to Australian media, these all stemmed from an incident in May last year when Caruso was reportedly helping a friend carry out a formal property seizure and delivery order in a town in Western Australia.

On Tuesday last week, Caruso suffered a major legal set-back in South Africa when the R14.5-million defamation case that he, MRC, MSR and a black empowerment partner filed against three South African environmental lawyers, two community activists and a social worker was judged to be a SLAPP suit by the Western Cape high court. The alleged defamation relates to comments made about the Australian mining operations in South Africa by the defendants.

Although the judgment by Western Cape Deputy Judge President Patricia Goliath has not necessarily ended the defamation case – it did not deal with the actual merits of the alleged defamation but confirmed that the defendants could argue a “SLAPP” defence – it did substantially raise the bar for Caruso and the companies to succeed.

Caruso fared better in Australia when his case was called in the Perth magistrate’s court last Thursday. Freestone confirmed that the “aggravated home burglary” charge was dismissed.

However, the two counts of common assault were remanded to 5 March “for mention”, said Freestone. (A “mention” is an Australian legal term for a routine or procedural appearance, and there can be several mention dates as a case progresses before pleas are entered and the case moves to sentencing or a trial, he explained.)

The two assault charges will be heard in the Mandurah magistrate’s court in Western Australia, some 72km south of Perth.

The Australian on-line newspaper The West Australian reported that prosecutor Sarah Jessup had told the Perth court there was no reasonable prospect of Caruso being convicted on the aggravated home burglary charge, that could have seen the businessman face up to 20 years in jail if found guilty.

Caruso’s lawyer, Patti Chong, told the court that Caruso, who is on bail, would plead not guilty to the two assault charges, The West Australian reported.

MRC did not respond to GroundUp’s invitation to comment. DM