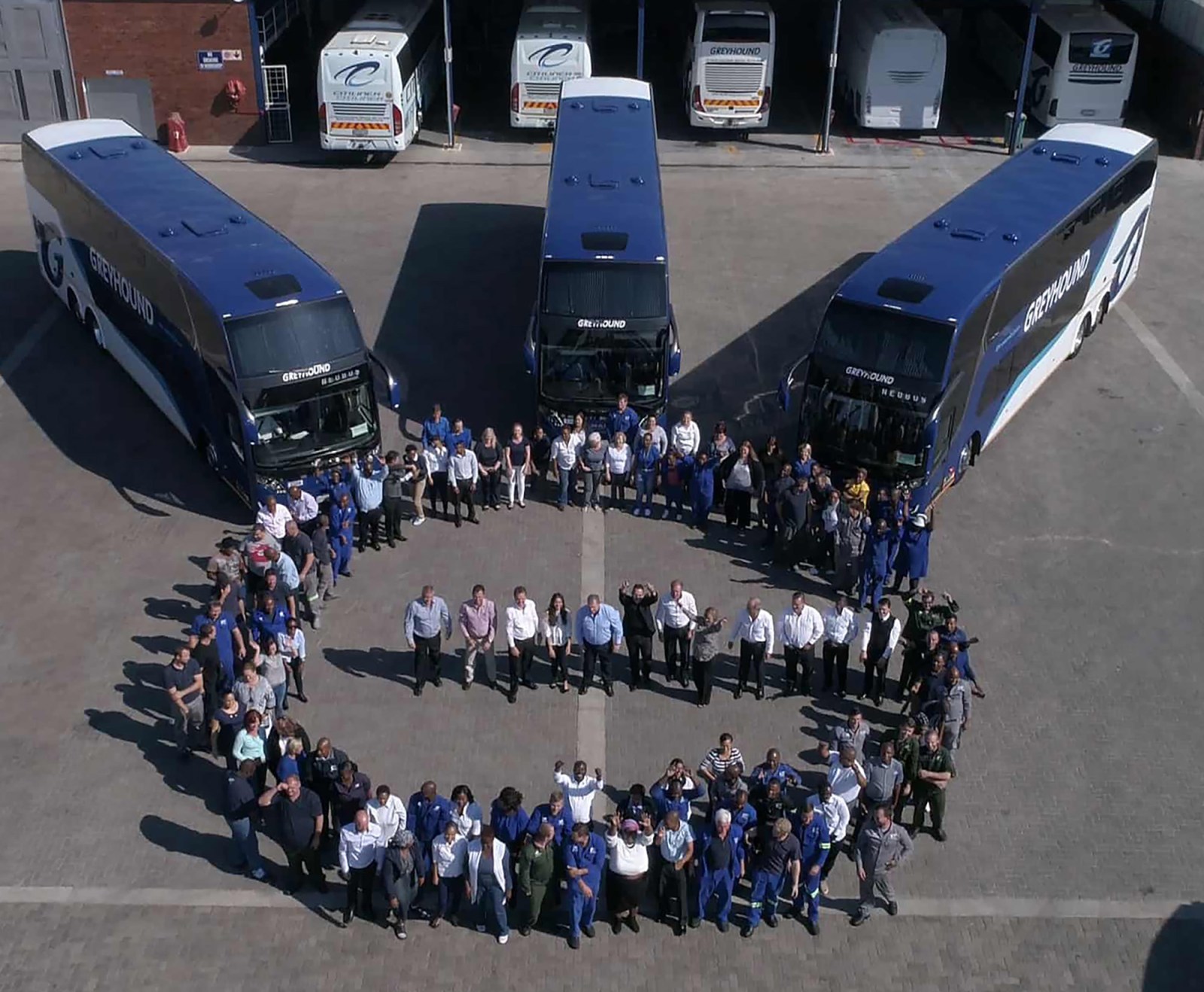 Greyhound to close operations this month after 40 years plus service - trying to get to bottom of it.Photo:Greyhound

After 37 years, the bus service ceases operations on 14 February. We send it a Valentine.

It is past midnight in the Free State. The bus stops. Brakes hiss. A door opens. The cold smacks me through my face. It is ±3°C.

In the bus’s warm darkness, I leave sleeping passengers behind. The sound of gentle breathing. Strangers. As someone once said: “39 seats, 39 stories.” Bye-bye.

I am outside Springfontein, a desolate forgotten little village between Trompsburg and Bethulie. Places that have lost their looks, but still have a hint of delicate seduction.

The driver gets out, walks to the side. He opens a door; from the inside of the huge house on wheels, he removes my luggage.

Off he goes. I am left alone in the night. I see stars again. Little nocturnal animals scatter in the bushes. My hands are freezing.

Then I see a car’s lights in the distance. I am a character in an old black-and-white American noir film.

A huge black 1941 Pontiac Streamliner driven by a man with an unspoken past, a bad attitude and wearing a hat, is coming to fetch me. Next to him is a blonde woman smoking. We’re on the run.

But it ain’t so. Only in the movies.

In real life, however, the lights wobbling towards me are those of my friend fetching me in his yellow 1400 Datsun bakkie. Year? 19-voetsek. Damn, this is why I like a journey on the Greyhound. It frees your imagination. It puts you in a Free State state of mind.

For more than a decade I have been visiting my friend at his guesthouse, either by train or by Greyhound. You don’t find stories in cars.

On 14 February, it is lights out in SA for a bus company whose name is used in poems, songs and movies all over the world. These vehicles tap into an archetype of sorrow, loneliness, being adrift in the dark.

In films, people who take the Greyhound are often lost characters with smashed hearts and enough money for a one-way ticket. On the other side there is the promise of a bigger, better world. One that collapses.

There is a yarn about a woman who once asked for a one-way ticket at a Greyhound station. The ticket seller replied (with a heavy American accent): “Why ma’am, when you take a Greyhound, it’s always a one-way ticket. No need askin’ for one.”

The Guardian asks about the movie Midnight Cowboy: “Is there a sorrier image in American cinema than that of disillusioned hustler Joe Buck (Jon Voight) cradling the dead body of his crippled, consumption-ridden pal Ratso Rizzo (Dustin Hoffman) on a Greyhound bus headed from New York to Florida?”

My love affair with buses and trains stretches way back, because that is where you meet off-beat, quirky or rude people. Many are soaked in pathos, each one with something to hide or to show.

The Greyhound carriages interested me because they introduced the Premium Class on the lower deck. I fancied the idea of comfortable, large seats, extra legroom, lights to read by, a toilet, movies, air conditioning, curtains and coffee.

The coffee, though, was a shrewd way to hide my Jack Daniels. I would pour tots into a cup. Rules are strict and you get warned: If they catch you with booze, the bus stops and you get off. I often wondered about that.

Should they catch me, I would walk to the closest town and start a new life there. Even if it is a place called Pampoenkraal. As long as it has a pub, a piano and a few losers staring into their drinks, I am happy. My type of people.

I was never lucky enough. By the time we reached Laingsburg, I would be tipsy.

Before you get there, though, you see the landscape changing from green to brown to skeleton-dry. Along the way, you stop at various spots, where people embark or disembark. This can be exhausting.

A lot of waving, laughing and crying takes place. It is South Africa, so emotions run high. Each stop is a dramatic event where the stiff upper lip has never, ever existed.

Snivelling continues inside and as you drive off you will also notice other people outside wiping tears or cackling, because that is what you do. Then silence, as the bus continues to the next stop.

Although, I did once sit near a woman who wept all the way to Laingsburg. It was more like an inner howl because she tried to suppress it. When we stopped to stretch our legs, I asked her if there was anything I could do to help her. “Men!” she screamed. “Stay away from me!”

To climb off the bus in Laingsburg is quite something. The temperatures are so high, you feel like the character in Paris, Texas, Travis (Harry Dean Stanton), who wanders through a desert in a dissociative fugue.

My favourite food would be a garage pie, slap chips with salt and cheap vinegar. Across the road from the petrol station there is a butchery that probably sells the best droëwors in South Africa.

The service is businesslike, the music loud boere musiek. They wrap the wors in brown paper and you have to run, as the bus starts revving.

On one of my many trips, I left a novel behind. The title was Papegaaislaai, which is an Afrikaans word for dagga. (It would translate into English as a “parrot’s salad”.)

When I arrived in Springfontein, I phoned the company the next day and they told me yes, the book was now in Durban. It would be sent back to their depot in Cape Town, where I could collect it. Indeed, on return, Papegaaislaai was waiting for me, after an illustrious journey to Durban and back.

A trip that stands out is one from the Free State to Cape Town. In some godforsaken dorpie a young woman climbed in. She was wearing too much make-up and there were white blossoms in her hair. Her perfume smelt of roses.

She would sneeze every once in a while and then exclaim: “Askies!” (“Excuse me”). All the way to Cape Town she said: “Askies!”.

When we arrived near Bellville I could see she was getting nervous. She spoke in Afrikaans on a little cellphone to someone, saying: “I don’t know in which suburb I am; you know I’ve never been here.”

She became more excited. When the bus stopped and the doors opened, she jumped out. This was her first time in Cape Town.

An older man came running towards her and she exclaimed: “Dad, dad, I thought that I’d never see you, ever again.”

He bent down and picked up some of the blossoms that fell on the tar and put them back into her hair. And he said: “It will never happen again.” He took her and held her against his chest.

Sentimental fool that I am, it was there that I had my own Greyhound moment and dried the moisture from my eyes. I’ll miss that bus.

Also, the people, the tissues, droëwors, Jack Daniels and coffee, and the stars above me as I stand next to the road at midnight in Springfontein. Bless you, you bastard, but you are deserting us.

It reminds me of the title of a play, The Milk Train Doesn’t Stop Here Anymore, by Tennessee Williams. No sir, the Greyhound, that old beast of a machine, doesn’t stop here any more. DM168

Herman Lategan is a freelance journalist. He is also a columnist and obituarist for Rapport.