Nigeria’s #EndSARS movement: We no go ever forget the youths wey die for Lekki 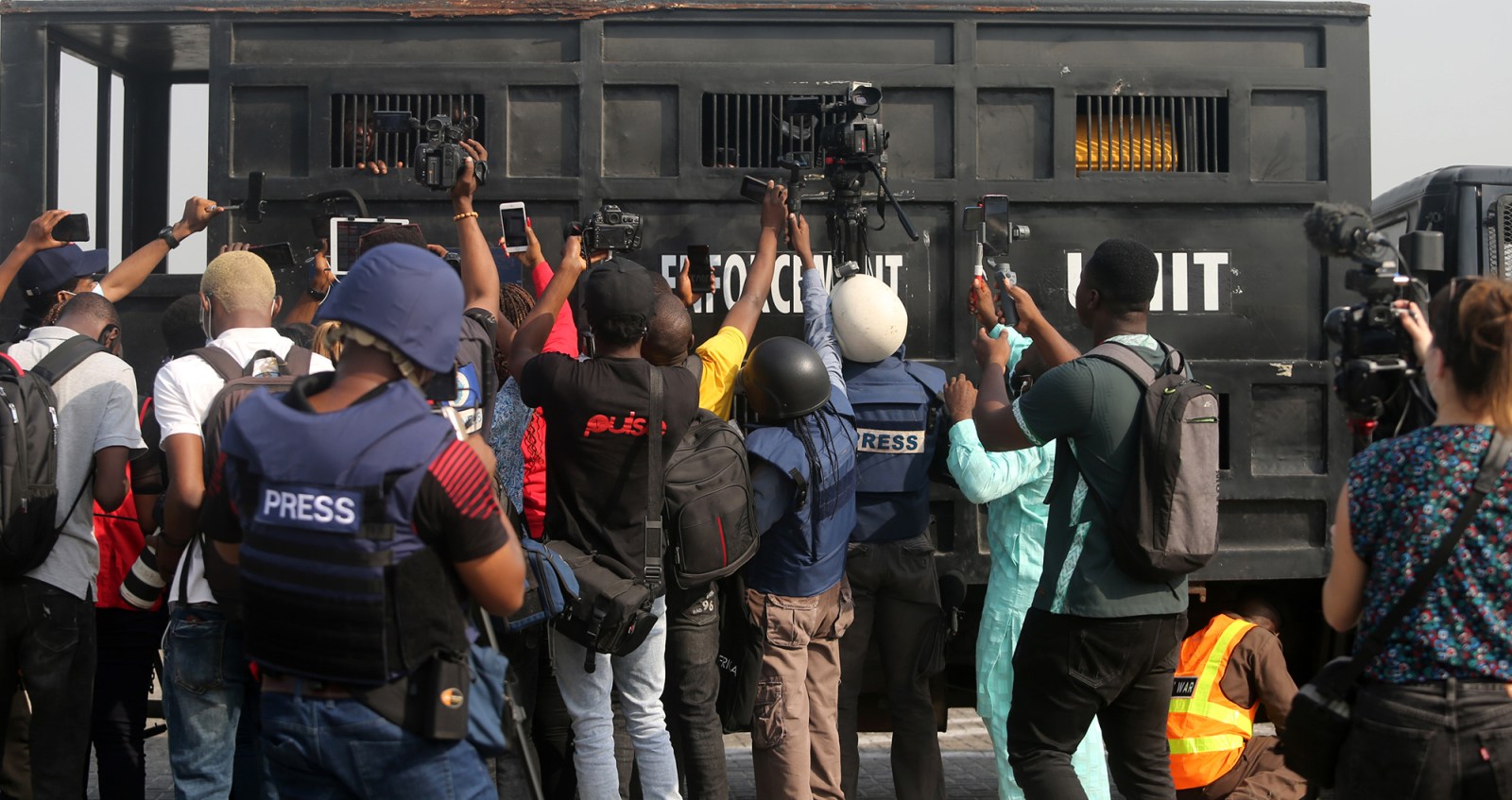 Activists arrested by the police speak to journalists from a mobile detention cell at the Lekki toll plaza on 13 February 2021. (Photo: EPA-EFE / AKINTUNDE AKINLEYE)

Four months after Nigerian troops opened fire on #EndSARS protesters at the Lekki tollgate in Lagos, there has been no justice for those who were killed by police and the army.

On 20 February 2021 – World Day of Social Justice – it will be four months since Nigeria’s soldiers shot and killed their own citizens at the Lekki tollgate in Lagos. These young people were protesting about police brutality and corruption, and the army responded with a level of brute force that shocked the world watching live on social media.

I was in the capital Abuja working on a newspaper project when this deadly crackdown happened. An acquaintance had just become editor of a small newspaper there and had asked me to help set things up. Our launch coincided with the start of the #EndSARS protests around 1 October 2020. So we quickly got very busy.

A few days before 20 October, those of us in the local media began hearing rumours that the government was preparing to put down the movement with violence. But it wasn’t just people in the media who were hearing these rumours. Anyone with some degree of connection with the military or politics had heard something, and people were calling each other and warning them to stay away from hotspots like the Lekki tollgate.

The signs were all over the place. The army had released a statement basically pledging allegiance to the Muhammadu Buhari administration and stating its commitment to a military intervention if required. The police had lost control of the situation and there were reports that thugs acting on behalf of the government were attacking peaceful protesters around the country. The situation had become extremely volatile, with protesters refusing to disband and also refusing to negotiate solutions with the government. Government statements became hostile once officials sensed that the movement had evolved from anti-police to anti-government.

On 20 October, the Lagos governor declared a 24-hour curfew as tension rose. The curfew would begin by 4pm, but protesters had already mobilised to the tollgate and refused to leave. A lot of us observing the situation knew a crackdown was imminent, but the intensity of what happened after that was beyond imagination.

A colleague at the newspaper texted me a link at about 7.45pm. It was an Instagram live video of our soldiers opening fire on unarmed protesters who were waving our country’s flag and singing our national anthem. My colleague then sent me a tearful voice note describing what we (and millions around the world) were watching live.

One voice from the social media footage still lingers in my memory because it typified the gallantry of those young Nigerians who took part in the #EndSARS movement.

I called my wife and son in Lagos to check that they were okay. I got on Twitter. I turned on the TV. I watched videos of people getting shot and a Nigerian flag draped in blood, and people singing the anthem in shaky voices with gunshots in the background. I phoned a friend who was in Abuja and we talked into the night, gasping at the horror and wondering what would happen next.

I’d been temporarily living with another friend at this time and we were both Yoruba.

The day after the tollgate crackdown, I and this friend began preparing to evacuate from Abuja. There was already some violent unrest involving Igbos and locals on the outskirts of the capital. Meanwhile, the tollgate in Lagos had been set ablaze and riots were happening in that city. Police stations, state-owned buses and one TV station there had been burnt. There was chaos in other parts of the country, and it wasn’t clear if any of this was coordinated.

One of the things I’d learnt about past crises in countries like Rwanda and Sierra Leone was that many people who were caught in them didn’t think things would get to that point. They didn’t think there would be a civil war or genocide in their country and they hung on in the belief that everything would be alright – until the worst happened.

I knew I didn’t want to be in that boat. I didn’t want to be stuck in a city far from home and away from my family, given our country’s history of cultural violence. If soldiers could gun down peaceful protesters and armed thugs roamed freely in the capital while police looked away, I certainly couldn’t feel safe in this city. One of our friends who was Igbo had already fled the city with her aged parents, fearing an outbreak similar to those in the 1960s that eventually led to the Nigeria-Biafra civil war.

I and my friend began to look up flights as we monitored the developments on TV and social media. We learnt about someone who had been sliced in the chest with a machete somewhere downtown. We set a target that if violence reached within a 20km radius of our location, we would immediately head to the airport and fly to any southern city in the country. From there we would find our way to Lagos.

Thankfully, the situation began to stabilise within a few days.

Today, I still hear young Nigerians like me describe how they cried and had a mental breakdown, just thinking about how our fellow Nigerians were singing our anthem and waving our flag, and they were killed by our own soldiers who swore to defend and protect us.

This month, a Lagos state panel of inquiry agreed that the tollgate should be reopened. There has been no justice for protesters who were killed by police and the army around the country. No one in government has taken responsibility for those shootings and no one has been held accountable. One minister in Buhari’s Cabinet even sneered on social media about how young people lacked the foresight of elders. There was no remorse. No soul searching. No further talks about police reform. It’s almost as if all that bloodshed was for nothing.

My generation will never forget our brave mates who died at Lekki tollgate and every other place in Nigeria during the #EndSARS movement. In Nigerian pidgin: We no go ever forget the youths wey die for Lekki. DM

Adedayo Ademuwagun is a political risk consultant based in Lagos.