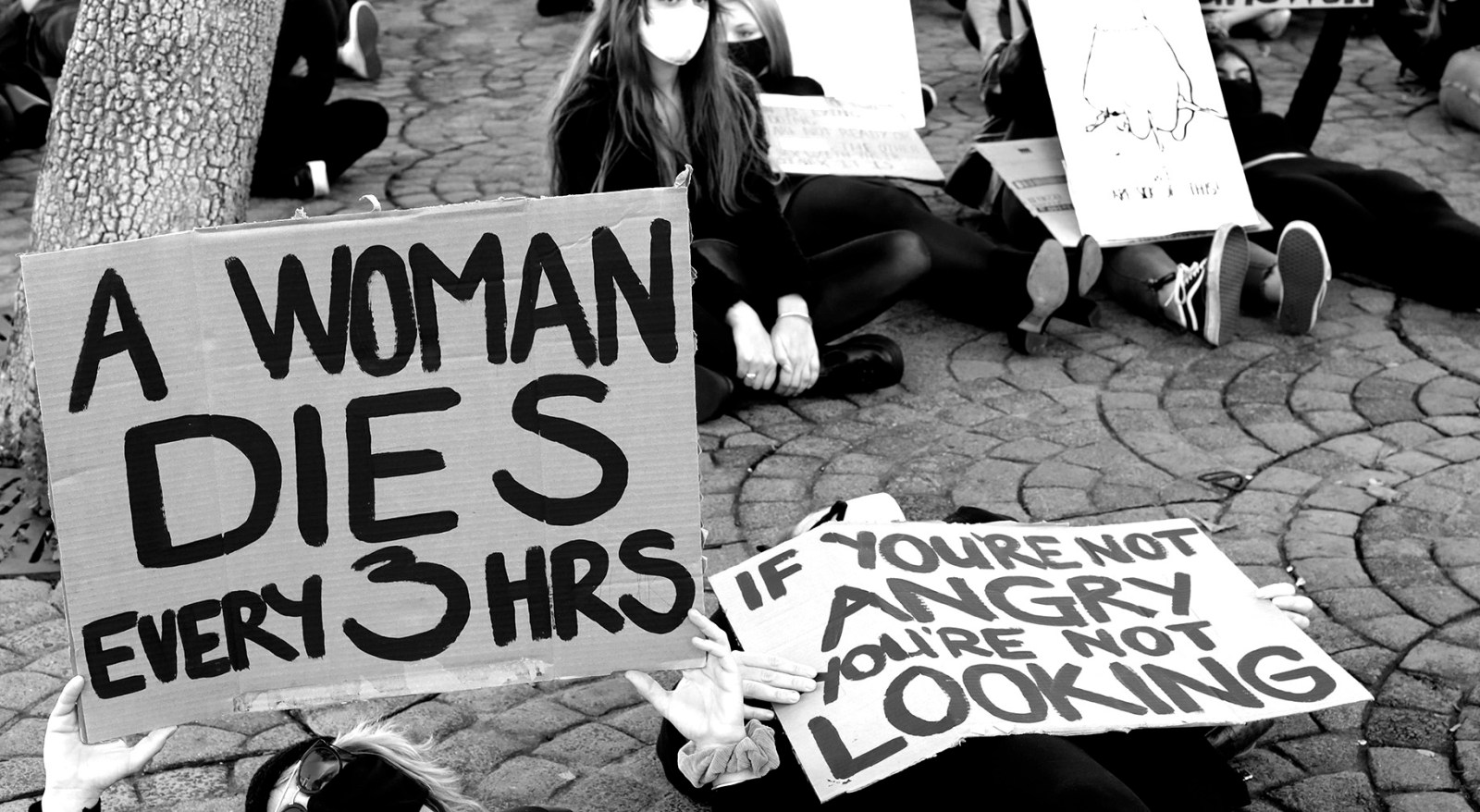 Protesters wear face masks to protect themselves against the coronavirus at a gender-based violence protest outside Parliament on 30 June 2020 in Cape Town. (Photo: Gallo Images / Nardus Engelbrecht)

The message of love on Valentine’s Day was wrecked by the brutal slaying of a 31-year-old woman whose half-naked body was found in a passageway in Kanana informal settlement in Gugulethu.

Police spokesperson Captain FC van Wyk said a postmortem would determine the cause of death and whether 31-year-old Sandiswe Bhuga was raped. The victim suffered multiple injuries and her body was found clad only in underwear when police were called to the scene at about 7.40am on Sunday, 14 February.

Gugulethu SAPS has opened a case of murder for further investigation to determine the motive for the killing.

Also on Sunday, 14 February, a 17-year-old girl from Zone 3, Thembalethu in George, who was visiting friends, was dragged by an unknown male to his residence where he undressed and allegedly forcefully raped her. A further three gender-based violence (GBV) crimes were also reported by the Southern Cape police.

Bhuga was the only child of Tholi Duna who was devastated by the news of his daughter’s death. Residents had told the father of the death of his child.

The murder in Kanana was widely condemned and angry residents called for swift police action that would lead to the apprehensions of the suspect. Information on the incident is sketchy and police will reveal more information once all clues have been followed up and a suspect is behind bars.

Spokesperson for anti-GBV organisation Illitha Labantu, Siyabulela Monakali, said: “As an organisation that fights against violence against women and children for over 32 years it is deeply saddening that yet another woman was brutally murdered in our communities.

“The brutalisation of women in South Africa has reached pandemic rates and it is particularly concerning that this issue continues to plague our society year in and year out without any reduction in the number of incidents; instead we are seeing an increase in cases of this nature.”

He called for justice for the slain Bhuga and appealed to the community to work with the police to help find who committed the crime. Monakali also appealed to all stakeholders to work in a collaborative effort to root out the scourge of violence and abuse plaguing societies.

Meanwhile, Southern Cape police spokesperson Captain Malcolm Pojie has confirmed that four suspects, between the ages of 23 and 31, were apprehended over the weekend in connection with four GBV incidents.

According to Pojie the first incident occurred on Sunday, 14 February between 12.30am and 1.30am when a 17-year-old girl visited friends at their home in Zone 3, Thembalethu. She was said to have been approached by the suspect who requested to talk to her outside.

However, once outside the suspect allegedly dragged her to his residence situated in Ngcakani Street where he allegedly undressed and forcefully raped the victim, Pojie said.

“After the ordeal, the victim walked home, during which a patrol van found the victim and asked her why she was crying. She then divulged what had happened at the residence of the suspect. The members immediately went to search for the suspect and subsequently arrested a 23-year-old suspect,” he said.

The second incident happened on Saturday, 13 February around 3pm when a 13-year-old female walked down a street from her grandmother’s house in Ethembeni, Knysna. The teen met a 25-year-old suspect who asked her to go and buy him a cool drink at a nearby shop, Pojie said, adding that when she returned with the cool drink the suspect allegedly took her into his house where undressed and allegedly raped the teen.

In both these instances, Southern Cape police apprehended the suspects.

The third incident involved the rape and assault of a 45-year-old woman that happened a week ago. After following up leads, police arrested a 31-year-old suspect on Friday, 12 February.

Preliminary investigation suggests the suspect sent his son to call the victim to his house.

“When she got there, he refused to let her go and held the victim in his room against her will where he allegedly raped her several times, before releasing the victim,” Pojie said.

The fourth incident occurred on Friday evening, 12 February, in Plettenberg Bay where a 31-year-old suspect was arrested after allegedly inappropriately touching a 14-year-old girl at a Spaza Shop. It is alleged the suspect, who is a shop assistant, touched the breast of the teen. The suspect was later arrested and faces a charge of sexual assault.