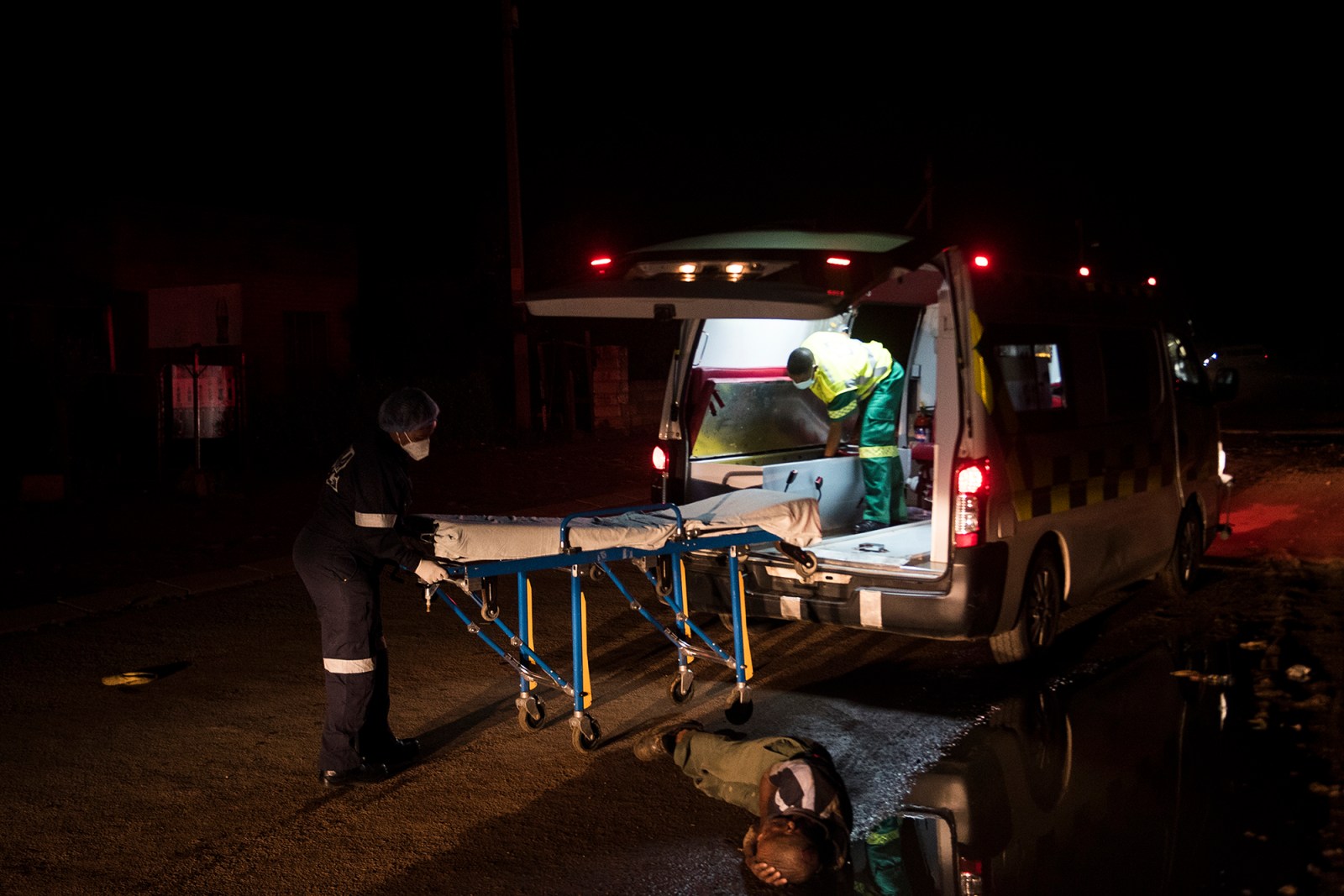 Paramedics about to transport a man involved in a hit and run accident several kilometres away from the hospital. Photo / Shiraaz Mohamed.

‘The younger generation is our biggest concern. In the cases we have had to attend to relating to non-compliance, it was predominantly young people who were involved.’

The second Covid-19 wave has receded, prompting the unbanning of the sale of alcohol. There is scant data available showing exactly how the ban affected hospital emergency units during the second wave, but the little that there is suggests it had a similar impact during both waves. Though the short-term objective might have been achieved, a sustainable reduction in alcohol-related trauma cases is more elusive.

It has been repeated by President Cyril Ramaphosa and Health Minister Zweli Mkhize that the ban on the sale of alcohol decreased the burden of trauma cases on hospitals in the second wave of Covid-19, just as it had during the first.

This is corroborated by health experts and workers. Ramaphosa pointed to the empty beds in the Chris Hani Baragwanath Academic Hospital’s trauma area on New Year’s Eve as evidence of this.

The latest data on deaths from unnatural causes (such as vehicle collisions, murders and accidents) from the South African Medical Research Council gives some insight. The number of unnatural deaths dropped dramatically from more than 1,000 in a week to just over 600 after the alcohol ban was reinstated and the curfew extended on 28 December 2020. This was significantly lower than the forecast. They shot up from just more than 600 to almost 1,000 with the unbanning and the reduction of curfew earlier this month. This came within an inch of the prediction.

Information from the Western Cape and Mpumalanga indicate that both had fewer emergency cases during the second wave and proportionately fewer alcohol-related cases.

In the Western Cape, the first wave of Covid-19 was dwarfed by the second wave. At the height of the first wave, in June, it recorded a seven-day rolling average of 1,623 new cases. In the second, in December, this number was 3,256. In terms of hospitalisations, the first wave reached a high of 1,887 in July and the second 3,547 admissions in one day in January.

The second wave was driven by the more transmissible variant; thus, more people required hospitalisation, reasons the Western Cape Department of Health. More staff were infected during the second wave compared to the first, which put additional pressure on those working in the health system, it said.

But the second wave had fewer general emergency cases: “During the first wave, Emergency Medical Services responded to a total of 25,874 trauma cases and 15,808 during the second wave,” said the department.

In both waves it noted a decrease in alcohol-related emergency cases when a curfew and ban on the sale of alcohol were in place. As the restrictions lifted, so the cases rose. Still, the department said it understood that “a blanket ban is not sustainable and we need to find long-term interventions that will reduce alcohol-related harms. This is something the Department of Community Safety is pursuing through amendments to the Western Cape Liquor Act.”

Although a temporary ban on the sale of alcohol may have reduced the burden of trauma cases on hospitals, this does not change how alcohol is regulated in South Africa.

It saw a much larger wave the second time around. At the height of the first wave, in August, it recorded a seven-day rolling average of 670 new cases. In the second, in January, this number was 1,146.

This reduction meant the department could direct all its resources to the “management and control of the transmission of Covid-19”. It also “released” beds. It said the lesson from the alcohol ban was that it could concentrate on more patients who were ill because of the reduction in the number of trauma cases.

Yet, as with previous alcohol bans, the latest was not as watertight as some might think. This had been true for the Eastern Cape, said the spokesperson for the Eastern Cape Liquor Board, Mgwebi Msiya. It must be true for all other provinces, because they were “not immune” to transgressions, he said.

“It’s not true that everyone complies with the alcohol ban. We received reports about some people who manufactured homemade beers and such. The police caught a number of people transporting alcohol illegally. So transgressions have been there even during the ban. The problem has been the growth of the black market during this period.”

The board is “very concerned” about people breaching the rules. “We were hoping that, after the lifting of this ban, people were really going to take responsibility to avoid any further ban on alcohol. The ban was necessitated by the fact that liquor outlets became super-spreaders. We are trying everything – our liquor inspectors are all over the  province.”

Young people are the main transgressors, he said. The board recently investigated a video showing an East London pub packed with young people drinking.

“The younger generation is our biggest concern. In the cases we have had to attend to relating to non-compliance, it was predominantly young people who were involved,” he said. “It concerns us how they relate to alcohol because if you look at road accidents you find it’s young people who are implicated in those as well. Perhaps we need to really intensify our efforts to educate them about responsible alcohol consumption because they are the biggest problem right now.”

Despite the continuation of the illegal alcohol trade, the board has picked up that there was a drastic reduction in road accidents – and trauma cases – during the alcohol ban. “During the festive season, we would have expected more road accidents and trauma cases, but we didn’t have many. This is also the time when you expect more transgressions in terms of trading conditions,” said Msiya.

Although a temporary ban on the sale of alcohol may have reduced the burden of trauma cases on hospitals, this does not change how alcohol is regulated in South Africa.

Since December 2020, the Southern African Alcohol Policy Alliance has been asking the national government to fast-track legislation already in the works to ensure a sustained reduction in alcohol-related trauma. On 9 February, the group again wrote to the Presidency urging that the State of the Nation Address provide a practical roadmap to achieving this. “We cannot afford for it to be ‘business as usual’ once the pandemic is over, given everything we have learnt about alcohol harm during our battle against Covid-19 over the past year,” it said.

It suggests solutions that include processing key legislation such as the Liquor Amendment Act of 2016 and the Road Traffic Amendment Bill of 2020. It also suggests an increase in excise tax to discourage excessive drinking, as well as assistance to those in the tourism and restaurant industries to lessen their dependence on the alcohol industry.

There is already much to be learnt from the alcohol bans, according to the head of South African Medical Research Council’s Alcohol, Tobacco and Other Drug Research Unit, Professor Charles Parry.

The unit has been analysing the interplay of lockdown, alcohol and health resources since the pandemic began. Now it is working out the impact of the alcohol ban on hospital admissions during the second wave.

It is still waiting for information from several provinces, but Parry believes the alcohol ban has already taught SA many lessons. It has raised attention to just how huge the burden of heavy alcohol use is in SA in terms of trauma and unnatural deaths.

It also shows the gaps in how death and trauma data are collected and reported.

“It got the president to acknowledge that alcohol is not an essential product and to highlight the close links between alcohol use and the scourge of gender-based violence,” said Parry. It also showed that the “cosy relationship” between the government and the alcohol industry can be disrupted and that the industry will go to great lengths to “get their business back”.

It forced a reckoning of the type of society we wanted, he said, and showed that change was possible by implementing restrictions. He explained that these regulations affected everyone tied to the industry and that it was in everyone’s interest to create a “new normal vis-à-vis alcohol in SA”. DM168