Ramaphosa cuts a lonely figure on that podium 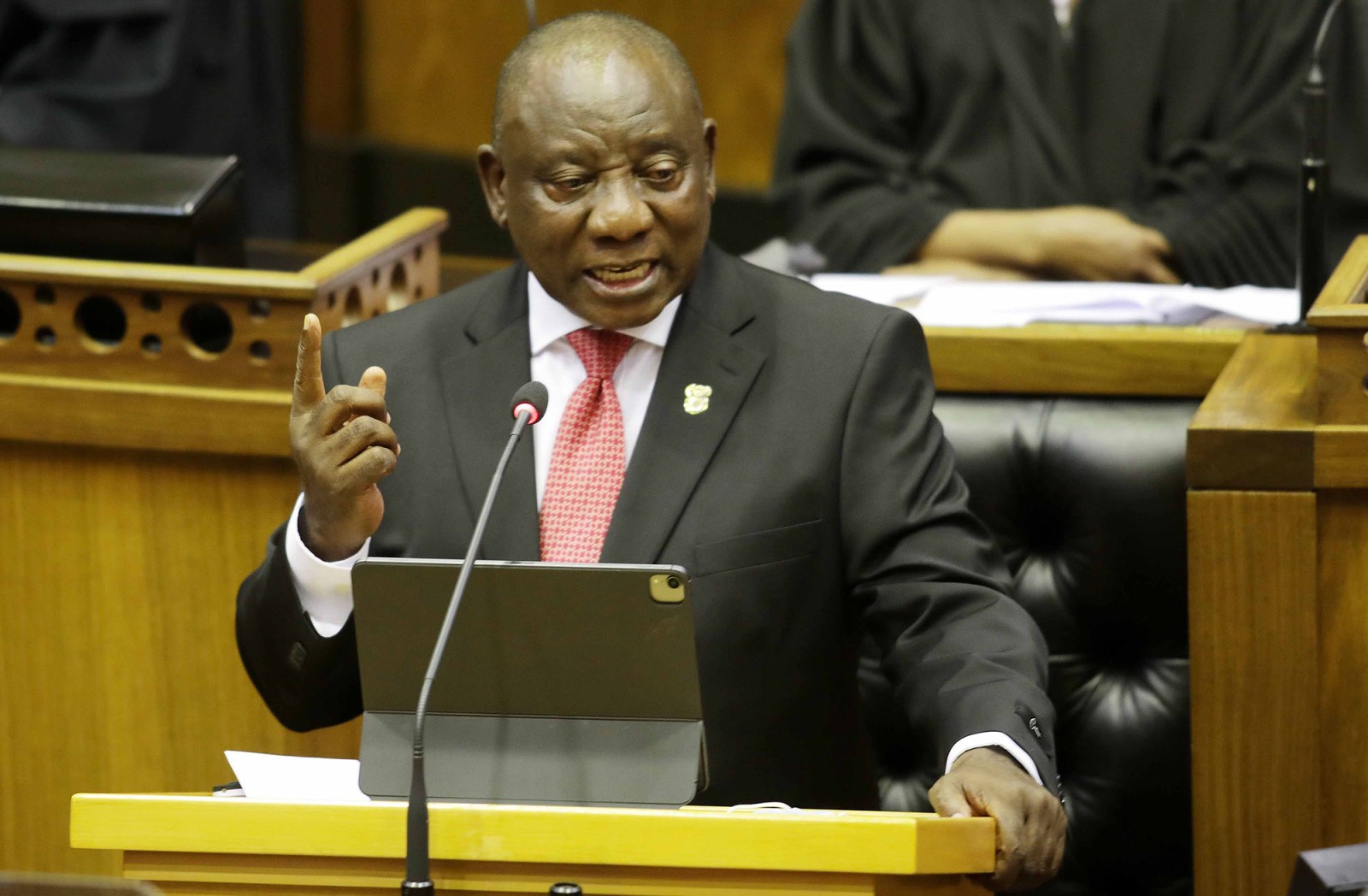 President Cyril Ramaphosa delivers his fifth State of the Nation address in strict adherence to the National State of Disaster regulations and in the form of a hybrid joint sitting, with at least no more than 50 members of parliament, representatives from the judiciary and the executive in the physical chamber and the rest of this category attended virtually. Date: Frebruary 11, 2021. Picture: ESA ALEXANDER/POOL

What also brought Ramaphosa’s forlorn figure into sharp focus was the invisibility of the members of his Cabinet this week.

As President Cyril Ramaphosa delivered his State of the Nation Address (Sona) on Thursday night, a few things stood out. The applause from the benches that usually accompanies the presidential stroll to and from the parliamentary podium was muted.

The hybrid joint sitting of Parliament, held in line with Covid-19 protocols, meant that only a few parliamentarians across the political divide could attend the event in person.

That image is perhaps a perfect metaphor of what the Ramaphosa presidency has become – a man surrounded by empty chairs.

He may be leading a collective of ministers and an ANC national executive committee (NEC), but he has no one around him.

When last did you hear any minister go out on a limb to defend Ramaphosa on any decision? Even former president Jacob Zuma, at the height of his political and economic mismanagement of our country, still had his praise singers bellow to uMshini wami as their signature tune.

Even today, Zuma still has some of his backers, including ANC Secretary-General Ace Magashule, firmly ensconced in his corner.

Not that one is longing for the return of those destructive Zuma days or for some other form of political sycophancy. The point is to demonstrate the current state of our politics and the precarious position in which the president finds himself.

The growing frustration, both inside Ramaphosa’s party and on the opposition benches, is not so much about what the president is doing but, rather, what he is not doing.

Listening to the ministers one could be forgiven for thinking that they do not sit in the same Cabinet. There is no sense of coherence and, more especially, one does not get the impression that the president is providing the necessary leadership. It seems every minister is pursuing their own departmental agenda, far away from their counterparts.

We still do not have any comprehensible explanation as to how the SA National Defence Force went and acquired the Heberon Interferon-Alpha-2B drug from Cuba – as a possible treatment for Covid-19 – without the approval or involvement of the health department or the Treasury. As taxpayers, we have to foot the R260-million bill – yet no one has been fired for the bungle.

What also brought Ramaphosa’s forlorn figure into sharp focus was the invisibility of the members of his Cabinet this week. One of the biggest difficulties in the build-up to this year’s Sona was getting any minister to come on air or to speak on the record about their work in government. Colleagues in the media struggled to secure interviews. This was unprecedented on many fronts. But perhaps it’s also a sign that they have nothing worth sharing.

Granted, Covid-19 was always going to thrust the health department into the spotlight, but is there anyone else working in government besides Dr Zweli Mkhize?

Yes, we have seen Minister of Police Bheki Cele patrol the beaches, his Home Affairs counterpart Aaron Motsoaledi defend the chaos at our points of entry, and Housing Minister Lindiwe Zulu explaining her department’s social security programmes, but that’s it.

If other ministers are doing any work then what exactly are they doing?

This excludes their periodic cameo appearances during the ministerial briefings, under the banner of the National Coronavirus Command Council.

Ramaphosa also appears to be losing allies at a time when he should be consolidating his position in the ANC and in government. That is, if he is interested in returning for another term as ANC president. One does not get that feeling.

The release of their own economic recovery plan by the Thabo Mbeki Foundation (TMF), a week before Ramaphosa’s most important speech for the year, is not a mere coincidence.

Given that Mbeki has stayed away from active politics and public commentary on domestic matters since his unceremonious axing in September 2008, the developments of the past week are telling. They suggest some level of frustration with the government’s handling of the crisis brought on by Covid-19.

This is evident in the TMF document, which points to the glaring lack of coordination, not only among government departments but also the social partners at Nedlac – which include business, labour, civil society and government. The social partners are crucial for any possible recovery to lift our country out of the economic ruins of Covid-19.

Ramaphosa may have spent Thursday night trying to convince South Africans that he has a workable plan to rebuild our economy, but the fact that he expects us to believe that his current crop of ministers will carry out that task is rather an ambitious expectation. He’s on his own on that one. DM168