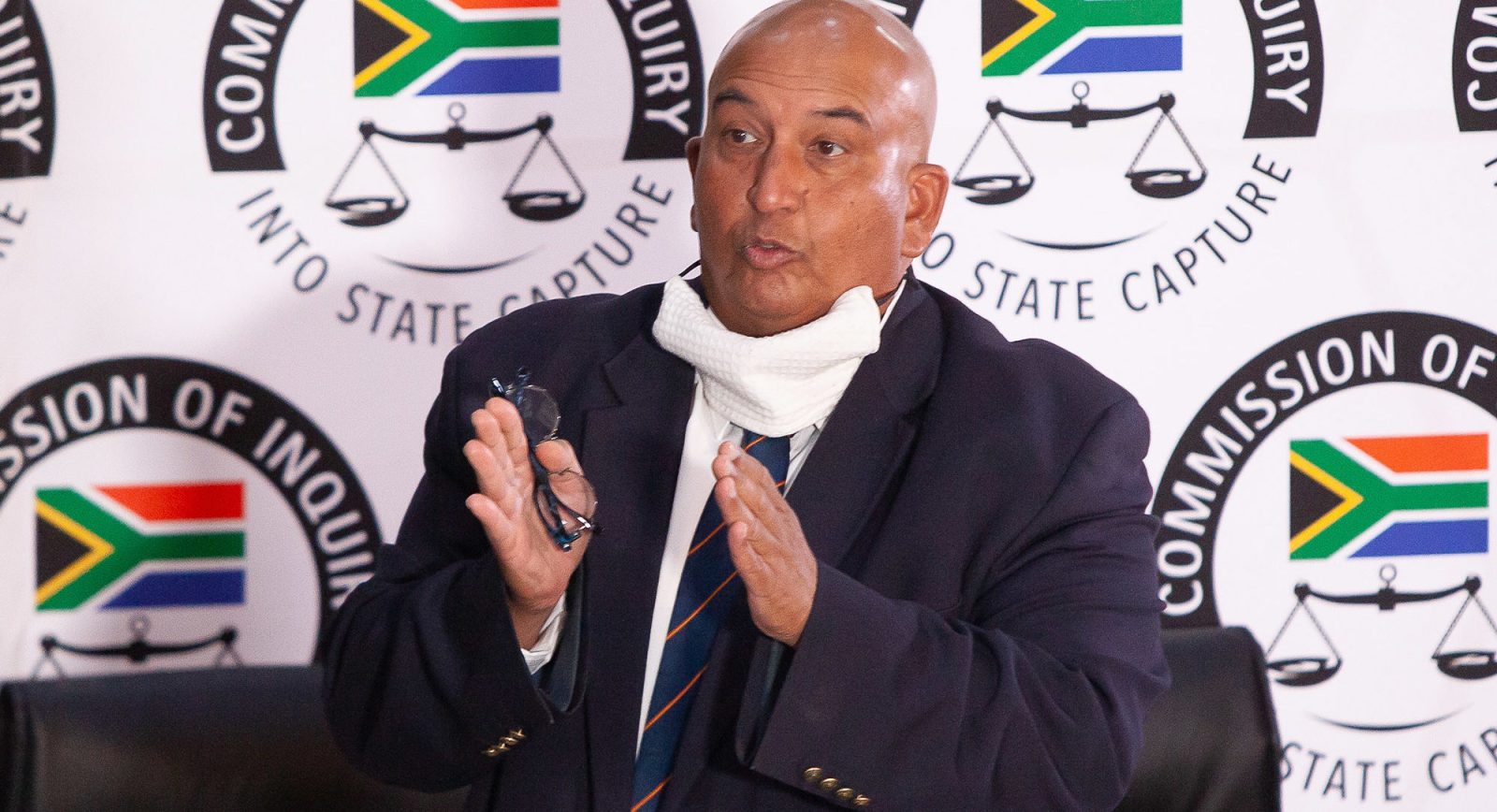 How the Eskom board managed to allow the state utility to pay the Guptas R2.1bn so they could buy the Optimum Coal Mine, was the central focus of almost two days of evidence at the State Capture commission as three board members and a fuel supply manager were grilled on Tuesday and Wednesday.

Deputy Chief Justice Raymond Zondo expressed disappointment several times at the Eskom board members’ lack of diligence in doing their job and so allowing billions to be bled from the already ailing Eskom.

Each board member had their turn to be lambasted by Justice Zondo — much like the parliamentarians who came before him in previous days — for not asking informed and probing questions of the executive and performing the oversight role they were assigned to do. In particular, Zondo struggled to believe they did not notice they were handing billions of rands to the “proposed owners” of a coal mine rather than to the mine’s actual owners.

Evidence leader Pule Seleka SC took former board members Professor Pathmanathan Naidoo, Venete Klein and Ms Viroshini Naidoo to a particular day, 8 December 2015, when the board authorised Eskom executives to conclude a R1.68-billion pre-purchase deal for coal from Optimum coal mine, as well as an April 2016 prepayment deal for a further R659-million worth of coal from the mine.

It was these prepayment deals that financed Tegeta’s purchase of the mine from Glencore’s subsidiary, Optimum Coal Holdings.

Tegeta’s majority shareholder, according to evidence placed before Parliament in 2017, was the Gupta family’s Oakbay Investments, along with Duduzane Zuma’s company Mabengela.

Testimony by Pathmanathan Naidoo, who took the stand first, set the stage for how a crisis appeared to have been engineered by new Eskom CEO Brian Molefe, which created fertile ground for Tegeta acquiring the mine.

Led by Seleka, Professor Naidoo told how a long-term contract — about 50 years — had existed between the mine, which supplied the Hendrina power station on a cost-plus basis, and Eskom. Hendrina was built to generate electricity from low-grade coal, essentially supplied at cost by the mine, which then made its profits from selling higher-grade coal on the export market.

But in the 2014-2015 period, export prices had dropped and the mine, owned by Optimum Coal Holdings (OCH) was losing money and sought to invoke a hardship clause in its Eskom contract, requesting a price increase from R150 per ton to R422 per ton. This request came before the board’s Bid and Tender Committee — of which he was chair — on 23 April 2015, the same day Brian Molefe had been seconded as Group Chief Executive by then Public Enterprises Minister Lynne Brown after a series of very suspicious events.

However, Prof Naidoo said the Bid and Tender Committee (BTC) referred the matter to the board, and the board referred the matter to Molefe to obtain more information and report back, as they believed it was an operational matter. The issue of his reporting back, which did not occur, was a point Zondo pursued with each board member, asking them why they did not follow up. The answers, to Zondo’s frustration and near disbelief at times, were largely that they considered the matter to have been dealt with.

The only report they received was a brief note in the Chief Executive’s report contained in the reading pack at a September 2015 board meeting, stating the Optimum contract had been terminated.

The board members said that before that they did not know Molefe had terminated Optimum’s coal contract in July 2015 and, according to evidence before Parliament, levied a R2.1-billion fine against Optimum for historic coal deliveries below specification. This was a fine Eskom inexplicably forgave when Tegeta later offered to purchase the mine.

The next move was the R1.68-billion pre-purchase agreement sent to the board on 8 December 2015.

Klein said the urgent submission to the board to authorise a request for the pre-purchase agreement stated it was for Optimum Coal Holdings so it could liquidate its debt and continue to ensure coal supply to the power station, which was of paramount importance to prevent load shedding.

She said the executives told the board the deal needed to be signed within 24 hours and a round-robin conference was called — wherein board members make or oppose recommendations without the option of discussing them as would happen in a properly constituted meeting — and the go-ahead was given.

Going through the recommendation made, Seleka drew each board member’s attention in turn to the wording, which stated the money would be paid not to Glencore as the owners of the mine, or even to Optimum Coal Holdings, but to the proposed owner of Optimum coal mine, which opened the door for the payment to go to Tegeta which was by that stage-managing the mine after having negotiated a purchase agreement with the business rescue practitioners. The very next day, Eskom management issued a R1.68-billion guarantee, not to Glencore or Optimum Coal Holdings, but to Tegeta.

It was the lack of attention to detail by all 12 board members which astounded the usually reserved Justice Zondo.

“I don’t understand how it is possible to understand that so many people on the board didn’t pick this up,” said Zondo, adding that the wording containing the phrase “proposed owner” was contained in the resolution, which was the most important part of the authorising document.

Although each of the board members pleaded that they were to some extent hoodwinked, that the urgency of the decision had been impressed upon them, that they were aware Optimum was under business rescue, that the heading of the document referred to pre-payment to Optimum, not Tegeta, and that they firmly believed they were authorising payment to the Glencore company, Zondo returned to the point again and again, remaining unsatisfied with the witnesses’ protestations.

Rubbing salt into the wound, a submission for a pre-purchase of coal from the mine was put before the board again, on Monday 11 April 2016, for an amount of R659-million. This was the amount Tegeta needed to finalise the purchase of the mine, and was again brought to the board as a matter of extreme urgency resulting in a teleconference meeting at 9pm.

Seleka pointed out that parallel to this, Tegeta had unsuccessfully attempted to borrow the amount from the banks, with Gupta right-hand-man Salim Essa having received an email turning down the loan application late that afternoon of 11 April 2016. Yet, the submission had been prepared over the weekend by Eskom acting senior manager for fuel resources, Dr Ayanda Nteta, who gave evidence before the commission to this effect on Tuesday.

Additionally, a regular board meeting had been scheduled for 13 April 2016, just two days later, yet Zondo noted none of the board members questioned the urgency and why the matter could not wait for the scheduled meeting. Instead, they authorised the payment.

Interestingly, Klein and Ms Naidoo both mentioned that the board had been previously rapped over the knuckles and warned not to cross the line and get too involved in Eskom’s operational affairs. This seems to have had the effect of subduing their oversight of the executive.

There was no evidence to suggest any of the three board members placed in the hot seat on Tuesday intentionally colluded with the Guptas to let Eskom finance their purchase of the mine, yet it was evident that at the very least, their lack of rigour and attention to detail had allowed them all to be played.

The commission continues on Wednesday, with further Eskom-related evidence from former board member Mark Pamensky. DM