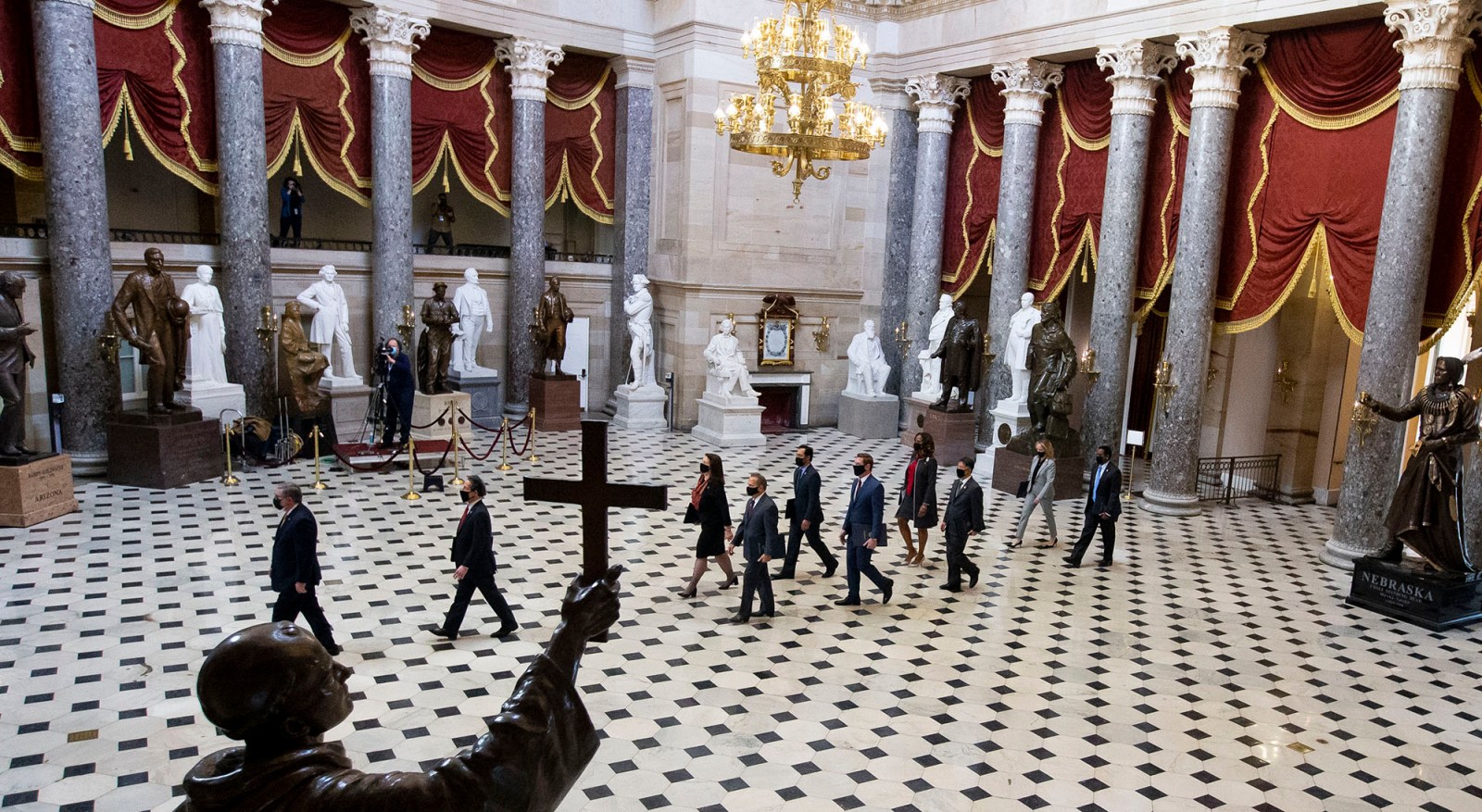 Before the vote you would have been forgiven for thinking it was an episode of 'Survivor: Senate Edition' thanks to the former president's long-winded, ad-libbing lead counsel.

“The Senate shall proceed with the trial,” pronounced presiding officer, Senator Patrick Leahy, late on Tuesday afternoon, closing about four hours of presentations on the constitutionality of Donald Trump’s second impeachment trial. The Senate voted “yes” with 56 votes to 44.

The trial, for inciting insurrection, gets under way on Wednesday, 10 February at noon EST (7pm South African time) – the first impeachment trial of a president who has left office.

House lead impeachment manager Jamie Raskin started off the presentations on Tuesday: “Our case is built on cold, hard facts. It’s all about the facts.” He said Trump’s team was arguing that if an impeachable offence was committed in the last few weeks a president is in office, the president would have “constitutional impunity”. Calling it a “January exception”, Raskin explained:

“People died that day… this cannot be the future of America, we cannot have presidents inciting and mobilising mob violence against our government and our institutions because they refuse to accept the will of the people.”

Closing his argument, a passionate and somewhat emotional Raskin said: “I hope this trial reminds America how personal democracy is, and how personal is the loss of democracy too.”

If watching the representatives for the two sides make their presentations/arguments for the constitutionality of an impeachment trial felt a bit like watching the reality show Survivor: Senate Edition, it could be mostly due to the hyperbole and mixed messages offered up by Trump’s lawyers.

Former assistant district attorney and lead counsel for Trump, Bruce Castor, opened by commenting on the “outstanding presentation from our opponents” in reference to Raskin who closed his arguments on a teary note as he recalled his January 6 Capitol riot experience. Raskin had invited his 24-year-old daughter and her husband to accompany him to the Senate as his family did not want to be separated, having buried his son the day before. He and his grieving family had gone from a funeral one day to a riot the next.

Castor said: “You’ll never hear anybody representing former president Trump say anything at all other than what happened on January sixth and the storming and breaching of the capital… should be denounced in the most vigorous terms.”

This seemed a fair comment – even understanding of and sympathetic to the lives lost, the injuries and the trauma of the people inside the buildings when the mob stormed in. But Trump’s lead counsel seemed somewhat at sea from there on, notwithstanding his remark that “we changed what we were going to do on account that we thought that the house manager’s presentation was well done”.

Castor then launched into an anecdote about his 10-year-old self listening to a record of a US Senator in the late 60s, talking about extraordinary people. This took a short while to get to the point he seemed to want to make, that “whether it be democrats or republicans, United States Senators are patriots first… They love their country, they love their families, they love the states that they represent… These are the people who sent you here to do their work, they trusted you with the responsibility of representative government.”

He added: “I feel proud to know my Senators, Senator Casey up here in the back, Senator Toomey over to the left.”

Castor seemed to be ad libbing, rambling from one point to another with a barely-there thread of connectivity from one issue to the next – from rioters, to crimes of passion, his childhood, patriotism, and, and, and.

Washington correspondent for The New York Times Maggie Haberman tweeted that what seemed to be an unprepared or off-the-cuff “speech” was apparently a “deliberative strategy” with the intent to break the mood in the House and dispel the emotion lingering after Raskin shared his January 6 experience.

FWIW: A Trump adviser tells me Castor is intentionally trying to reduce the emotion in the room after the House managers’ case. Calls it a “deliberative strategy.”

Castor spoke for about 15 minutes before he got to the topic of the Constitution and the impeachment:

He went on to make his freedom of speech, First Amendment right argument by saying of Raskin and his team: “I can’t believe these fellas are quoting what happened pre-revolution as though that’s somehow of value to us. We left the British system.”

He said a Republican representative who said she wanted to walk back comments she had made, should not walk them back and should “be able to comment as much as she wants and she should be able to say exactly as she feels… anybody who agrees should be permitted to say they agree. That’s what we broke away from Great Britain to be able to do.”

He was followed by Trump’s other lawyer, David Schoen, who made a scathing presentation:

“They tell us that we have to have this impeachment trial, such as it is, to bring about unity. But they don’t want unity, and they know this so-called trial will tear the country in half, leaving tens of millions of Americans feeling left out of the nation’s agenda as dictated by one political party… This trial will tear this country apart.”

After the presentations, Republican Senator Pat Toomey, whom Castor had singled out as “my Senator”, told the media he thought “the House impeachment managers made very strong arguments… well grounded in the Constitution and precedent.” Toomey had found that Castor and Schoen “had a weaker case to start with, and I don’t think it was very persuasive”.

The Republican who boosted the “ayes”, deciding to vote with the Democrats in favour of going ahead with the impeachment trial, was Louisiana Senator Bill Cassidy. He said the House managers were “focused” and “organised” and that “President Trump’s team were disorganised” and “random”. DM