Families without water as City of Cape Town contract ex...

Families without water as City of Cape Town contract expires 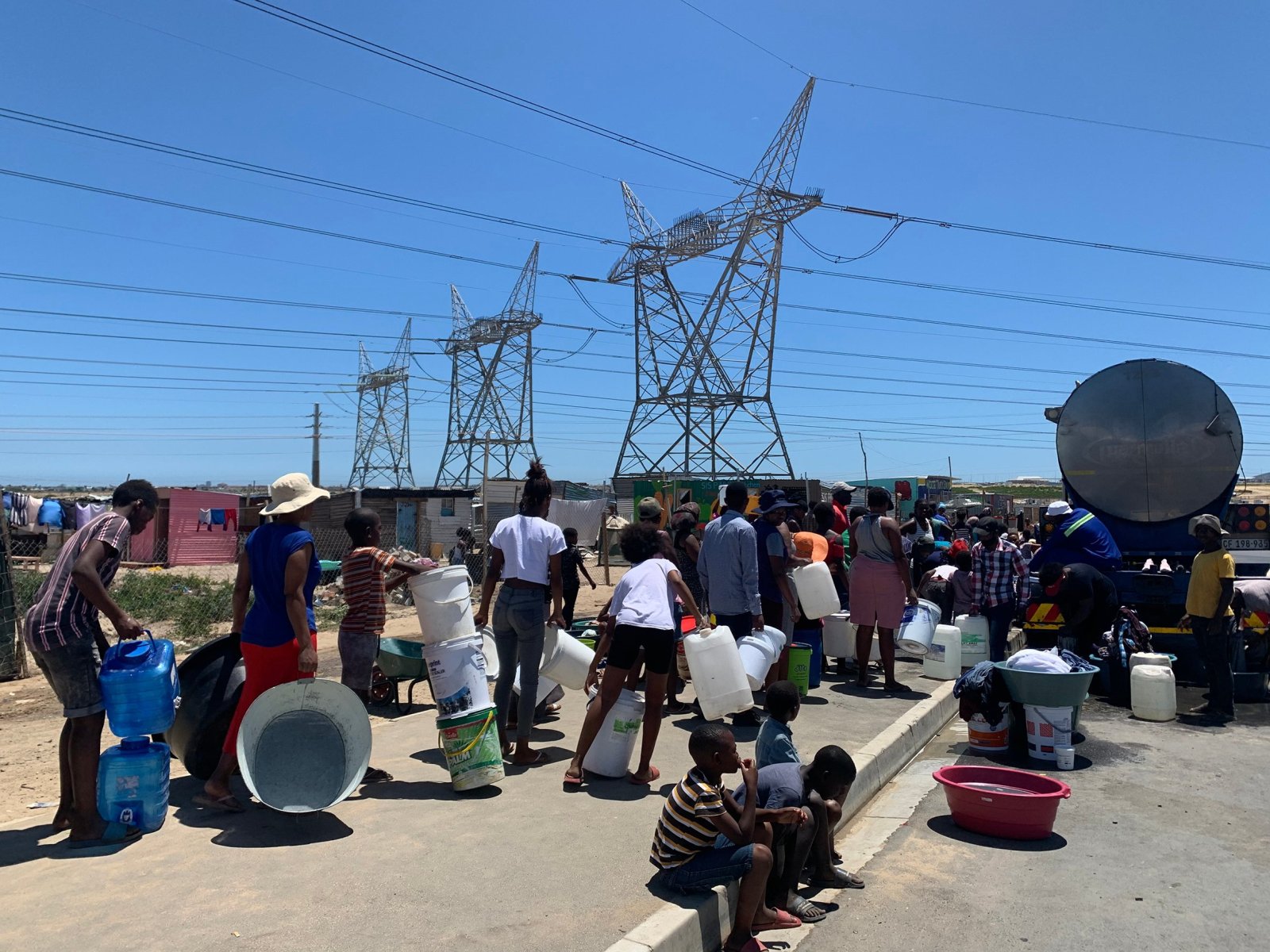 In this file photo taken on 10 December 2020, Zwelitsha informal settlement residents queue for water from a water tanker contracted by the City of Cape Town. (Photo: Peter Luhanga)

Residents of an informal settlement in Dunoon, Cape Town, have threatened to continue to block roads if the City does not deliver enough water. Water deliveries have been reduced since a contract for bulk water delivery ended on 31 January.

Residents of Zwelitsha informal settlement blocked Malibongwe Drive with rubbish for several days last week and at the weekend in protest over a lack of water. They say if the problem is not resolved they will continue to protest.

The City of Cape Town began contracting companies to use water tankers to deliver fresh water to informal settlements around the city with the first Covid-19 lockdown in March last year. Ward councillor for the area, Lubabalo Makeleni (ANC), said this contract had lapsed on 31 January and the City did not have its own capacity for bulk transportation of fresh water for distribution.

He said the City contractor had been disbursing 30,000 litres of water per day to the settlement, but since that contract came to an end, the City had been using smaller 10,000-litre water trucks which run out of water before everyone is supplied. As a result some households only receive water every three or four days.

Zwelitsha resident Amanda Sogoyi, who lives in a two-room shack with her four children, said water was so scarce that residents resorted to drinking cheap sugary soft drinks as a substitute, and there was no water even to wash her children’s hands before a meal.

He said he had told community leaders that the City was unable to match the water distribution volumes offered by the contractor. “I explained to Limberg that the people used to receive water every day.”

He said the provision of toilets was a further problem as there were not enough for the informal settlements, and though a further 365 toilets had been requested in June, there had been no feedback from the City and its contractor. Makeleni said residents resorted to relieving themselves in buckets and then emptying these on the side of the road, in canals or on open ground. Adjacent businesses had complained and threatened to move their premises elsewhere due to the proliferation of flies.

He said more than six informal settlements had not received the number of toilets requested.

Regarding the provision of water, Limberg said the City’s R68-million tender for the delivery of potable water in response to the Covid-19 disaster declaration in March 2020 had ended.

She said: “The previous contract used for water delivery ended on 31 January 2021. A new contract was put in place where water is being provided at a reduced rate. This is due to the reduced amount of potable water tankers available on the new contract.”

Limberg said factors such as land ownership, legal status and land suitability had to be considered to determine whether a settlement could be provided with services in the form of toilets and taps for instance.

With regard to the shortage of toilets, Limberg confirmed that requests for toilets had been made by the ward councillor for various settlements around Dunoon, but due to the challenges experienced in relation to City’s toilet contractor Sanitech, new requests could not be delivered. She said when the community had eventually agreed to allow Sanitech into Dunoon, available toilets had already been provided to other communities in need.

The request for additional toilets would be considered once additional funds had been allocated, said Limberg.

Western Cape police spokesperson Captain Frederick van Wyk said that during the weekend of 5 and 6 February, two dockets for public violence had been registered. Protesters had placed trash bags in the road to block traffic.

“The protest was about the lack of water. Protesters were upset that water was not received,” said Van Wyk. DM