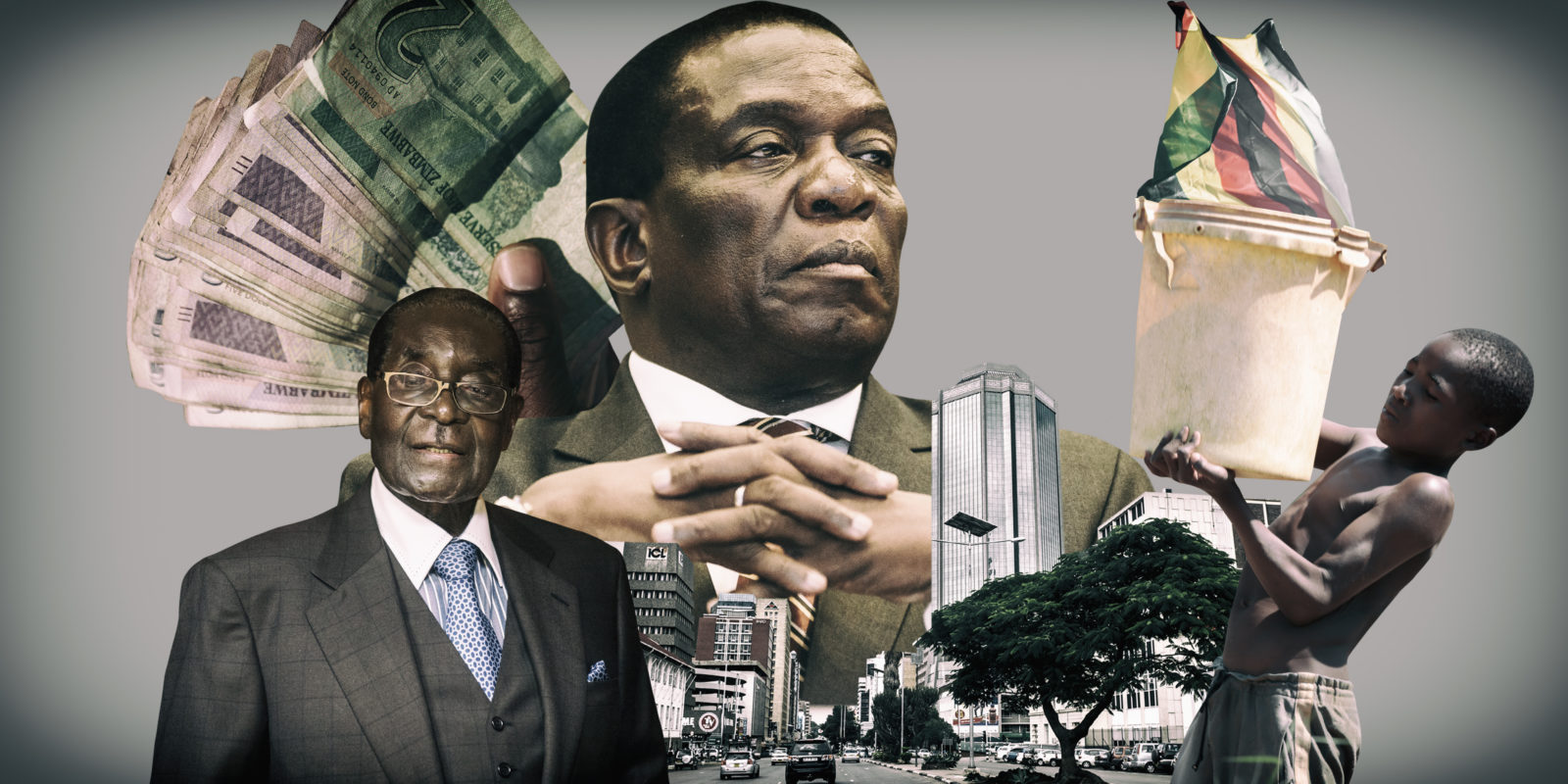 As Maverick Citizen editor Mark Heywood wrote on Tuesday, the report ‘provides a post mortem of the cancer that killed the Zimbabwean dream of freedom and independence’.

Daily Maverick’s exclusive report on the massive scale of State Capture and corruption in Zimbabwe is gaining international attention and has been cited by the US Senate, putting President Emmerson Mnangagwa and his government under a harsher international spotlight.

State capture and corruption in #Zimbabwe continue to be a concern of mine. A timely report released by @dailymaverick exposes the destructive effects that elite cartels play in robbing the country’s future. Our partners, the Zimbabwean people, deserve better. #DemLoot https://t.co/b8yNOQTdXN

Mnangagwa himself is fingered in the report as being one of the bosses who run lucrative cartels in a wide range of commodities at the expense of the average Zimbabwean.

On Tuesday, the report was raised by Republican US Senator Jim Risch, the ranking member of the US Senate Foreign Relations Committee, who retweeted a Daily Maverick tweet about the Zimbabwe report, adding; “State capture and corruption in #Zimbabwe continue to be a concern of mine. A timely report released by @dailymaverick exposes the destructive effects that elite cartels play in robbing the country’s future. Our partners, the Zimbabwean people, deserve better. #DemLoot.”

Former DA leader Mmusi Maimane tweeted: “This exposé by the @dailymaverick is very important for every Africans to read.”

In Zimbabwe, opposition Movement for Democratic Change senator and former education minister David Coltart tweeted: “If you are puzzled why such a wealthy country, with such intelligent, well educated people can be so poor, then read this report published today in @dailymaverick. It explains how and why a network of cartels is plundering #Zimbabawe.”

As Maverick Citizen editor Mark Heywood wrote on Tuesday, the report “provides a post mortem of the cancer that killed the Zimbabwean dream of freedom and independence”.

The report was being published in South Africa as it was not safe to do so in Zimbabwe because of attacks on the media and civil society activists. For the same security reasons, the authorship of the report would remain anonymous.

“The 64-page report details the scale of the theft – among others, illicit cross-border financial transactions cost Zimbabwe up to a staggering US$3-billion a year and billions in gold and diamonds smuggled out of the country.

“It is estimated that Zimbabwe may lose up to half the value of its annual GDP of $21.4bn due to corrupt economic activity that, even if not directly the work of the cartels featured in the report, is the result of their suffocation of honest economic activity through collusion, price fixing and monopolies.

“Ironically, President Emmerson Mnangagwa, who has been a public critic of illicit financial transfers, is identified by the report as one of the cartel bosses whose patronage and protection keeps cartels operating.”

The report, A Study of Cartel Dynamics, is a detailed analysis of all the available evidence of the economic cartels and the business people and politicians behind them who have captured the resources and government of Zimbabwe to serve their own interests.

Heywood said Maverick Citizen had sent the report last week to Mnangagwa, Zimbabwe’s ambassador to South Africa, Isaac Moyo, and all those implicated in the report, asking for their comments. None had responded.

The report focuses on business cartels because these are the vehicles used for State Capture. Heywood added that one of the experts he had asked to review the report pointed out that normally cartels work to undermine the state.

“In Zimbabwe, however, they are in league with the highest people in the land. #DemLoot, in the now-famous words of journalist Hopewell Chin’ono.”

The report, the first of two, includes case studies of the operation of cartels in roads, fuel, agriculture, cigarettes and mining. It reveals that;

The report “uncovers the ways cartels made Zimbabwean politicians and business people enormously rich, although most of their wealth is hidden and banked outside the country, as revealed in the 2016 Panama Papers,” Heywood said.

By contrast, the cartels had left ordinary Zimbabweans among the poorest people in the world:

The report argues that the 2017 military coup that removed Robert Mugabe hardly changed the system, except for changing a few individual beneficiaries.

The Zanu-PF government had responded to the deepening and largely self-made socioeconomic crisis in the country by clamping down on any criticism or dissent, the report said.

“The research that informs the report was undertaken through an exhaustive literature review, as well as interviews with a number of people in Zimbabwe,” said Heywood.

“Because of the threat of repression, the interviewees are all anonymous and records of interviews have been destroyed.

“To ensure the integrity of the report, Maverick Citizen undertook an independent fact-checking exercise and can vouch for the veracity of the information it contains.

“It is, therefore, we believe, the most up-to-date and complete analysis in the world of how a whole economy is being hijacked.”

Heywood said the report was relevant to South Africa because “our countries’ destinies are inextricably linked” and the citizens of both countries were “victims of colonialism, of the arbitrary drawing of borders and now of predatory post-colonial elites.

“Second, the report offers an anatomy of advanced State Capture which should be instructive to how we understand our own recent experience. As witnesses to the Zondo Commission reveal more every day, Zimbabwe is an example of the country South Africa could have become were it not for the resistance of civil society, the media and the judiciary. The parallels and similarity in modus operandi are remarkable.

“For example, the report (p20) details how the Zimbabwe National Road Authority (Zinara), awarded a contract to a company for motorised graders worth $8-million in 2012 where other bidders have quoted for $5.2-million. Zinara ordered 40 more machines in 2013, despite criticism that the graders were inappropriate for Zimbabwean conditions.

“This seems troublingly similar to the scandal over the Passenger Rail Agency of South Africa’s (Prasa’s) purchase of trains that were too large to fit on South Africa’s railways, and the manner in which Prasa, like Zinara, was captured and then looted for private gain.

“Third, it is important because South Africa is deeply implicated in Zimbabwe’s ruin. Our crooked businessmen are the buyers of the diamonds, gold and tobacco smuggled or sold from Zimbabwe, but not declared or accurately priced for tax evasion purposes.

“Our ruling party, the ANC, continues to cover for a political party that long long ago shed its progressive credentials.

“And, as Chin’ono pointed out on Instagram several weeks ago in response to South Africa’s increasing militarisation of its borders to keep hungry Zimbabweans out, the problem is that ‘President Ramaphosa stands in solidarity with President Mnangagwa’s regime which authors unemployment and has destroyed the job opportunities that Zimbabweans seek in your country. It is a political problem that will remain in place until it is solved and when your own political elites in the MyANC stop supporting the political rot in Harare directly or implicitly’.”

The report concludes that curbing the cartels would be very daunting as those who should be doing that are so complicit in the cartels.

The report recommends increased external monitoring of Zimbabwe, and more outside support for key institutions and individuals within Zimbabwe monitoring corruption such as the Zimbabwe Anti-Corruption Commission, the Office of the Auditor-General and some NGOs.

Foreigners should also apply pressure on companies and individual businessmen that are profiteering from State Capture.

“With the election of Joe Biden as US president there is one less ‘big man’ in the world behind which tyrants can hide, and it is hoped that through multilateral institutions (rather than unilaterally) the US will become a force to advance democracy and human rights again.

“But, in all of this, South Africa has a unique role: our media, our revenue services, civil society, business and government all could play a much greater role in reversing cartel capture of the Zimbabwean state and the immiseration of millions of people.” DM