The new style in cash-in-transit heists 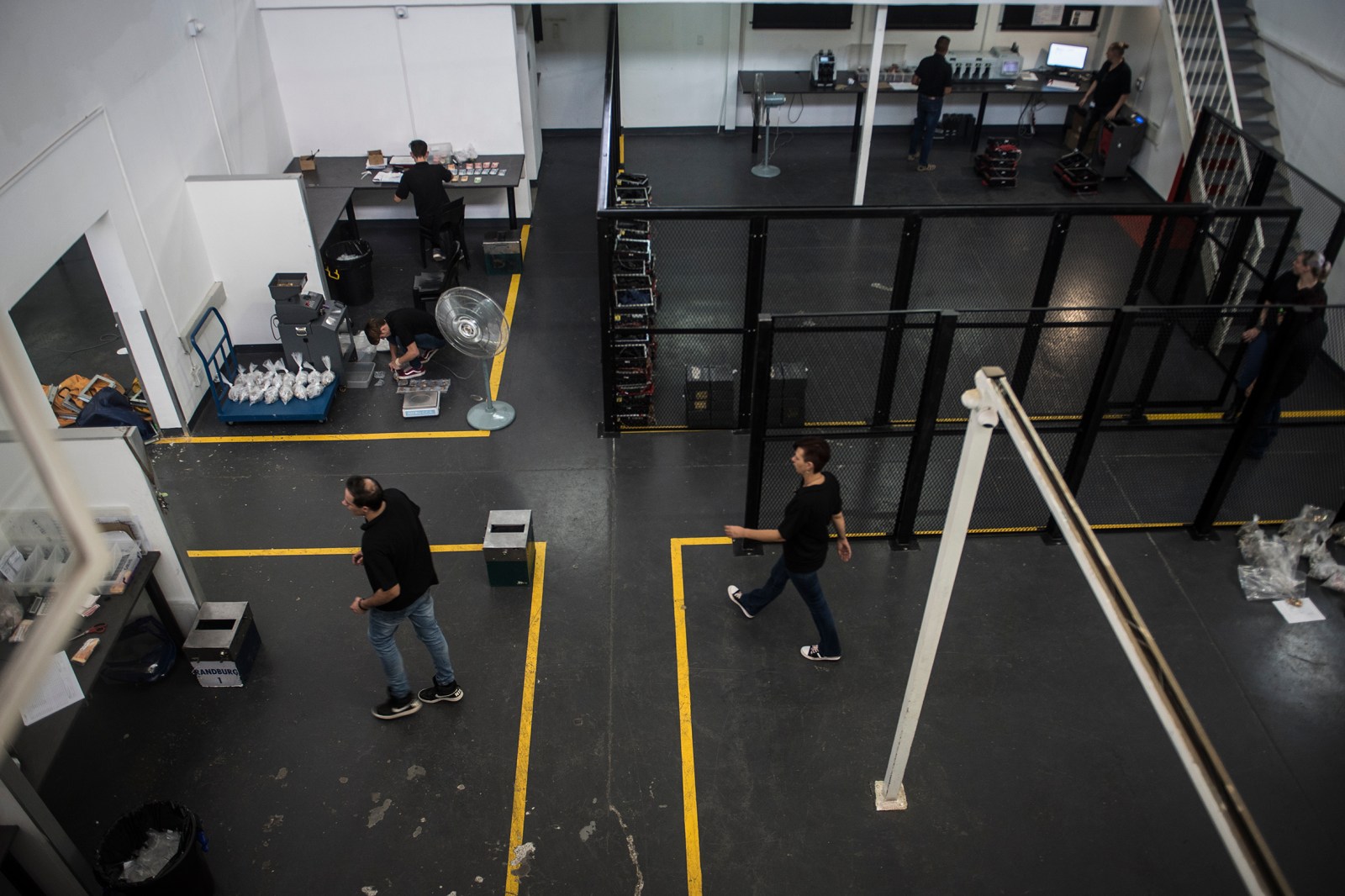 The inside of a cash-in-transit collection and delivery service facility in Pretoria. (Photo: Shiraaz Mohamed)

A shift in the modus operandi of cash-in-transit robberies had one overpowered guard strapped with explosives. Did someone get ideas from terrorists?

The use of explosives in cash-in-transit robberies and heists is methodical, almost expected . The case last weekend that targeted nine Absa ATMs in the Strand and Gordon’s Bay areas in Cape Town was different: new modus operandi, more terroristic in nature.

On the morning of 30 January, a group of about five men overpowered and abducted two SBV Services employees who were doing maintenance on a faulty ATM in Rusthof, Strand.

The employees were disarmed, forced to their vehicle and one employee was made to strap explosives on to his body.

Between 8am and 9am, the Absa ATMs were targeted and cleared along the two coastal areas. This was according to the Western Cape Hawks spokesperson, Zinzi Hani. No arrests have yet been made and the Hawks investigation was still under way at the time of writing.

At some point during the kidnapping and robberies, the two abducted cash-in-transit employees were separated. According to Hani, the employee who had not had the explosive device strapped to him was dropped off at an unknown location in Khayelitsha.

He later reported to the Strand Police Station, SAPS spokesperson Novela Potelwa told DM168. Hani could not confirm this line of information.

Why and when the two employees were separated is as yet unknown.

“What were these criminals hoping to achieve by separating them?” asked Dr Johan Burger, a senior researcher at the Institute for Security Studies (ISS) Africa.

“It’s difficult to imagine that the robbers were very considerate, leaving the guy with the explosive device – in an area where he couldn’t cause too much damage – while the other guy was being sent to get help.” 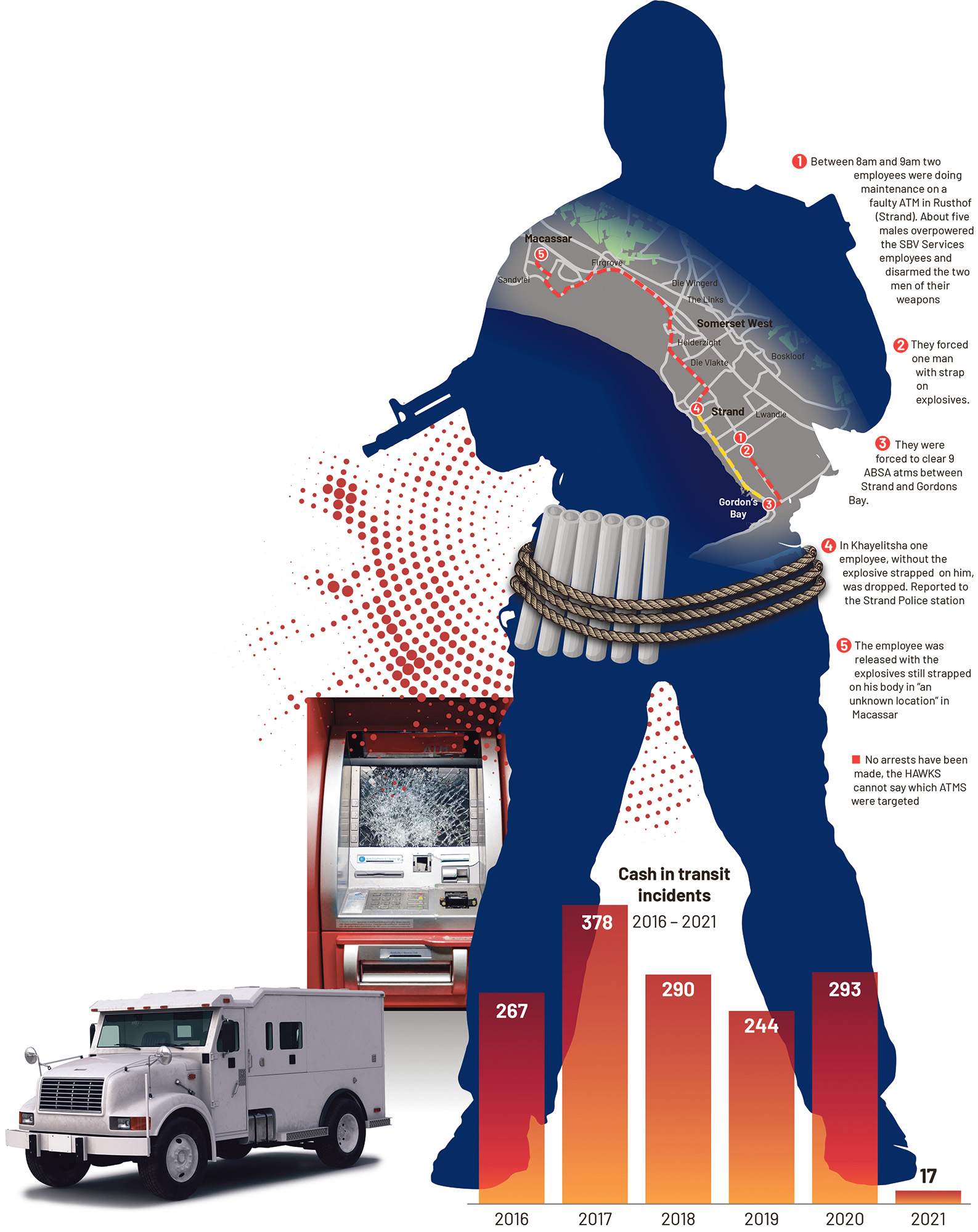 But the second peculiarity about the case is much more alarming: a shift in the modus operandi that will definitely be copied by other cash-in-transit robbers, according to criminologist and author Dr Hennie Lochner.

It was only a change in the way the device was used, but it made a lot of difference, said Lochner, who pointed out that it was strange that criminals would strap explosives to an individual and stay in close proximity to that person. This is especially true if the bomb was activated but there was no remote to set it off.

“You do not strap somebody with explosives and then sit with them while you are in the car, when you know that the explosive might go off,” Lochner said. “No criminal will put their life in danger like that.”

The Hawks would not comment on the particularities of the explosives because this formed part of the investigation.

Lochner said: “They [the Hawks and SBV Services] will have to investigate further, and eliminate the victims [as suspects], validate their stories, and then look outside.”

Evidently, an inside job is not off the table but investigators would not comment on this aspect of the case.

During 2020, there were 293 cash-in-transit robberies recorded in SA. The most affected province was Gauteng, said Grant Clark, spokesperson for the Cash-in-Transit Association of South Africa (Citasa).

Both Clark and De Cillia raised concerns about the escalating violence and disregard for life in these criminal acts.

The problem with the new modus operandi was that it was an easy job because it was minimum risk – more effective, Lochner said. “This looks like these things that are used in Afghanistan and Iraq,” he said.

Burger agreed. He has been working with the industry since 1994– first as the chairperson of the police’s priority committee on bank and transit robberies and then as a researcher working with the security and banking industries.

This was the first of its kind in South Africa, Burger said, adding that the tactic had clear terroristic associations.

Usually, criminals would use explosives to blow up the cash vans, remove the cash and flee.

Otherwise, explosives are used to blow open the ATM machines. This has become more difficult since the banking industry put in measures to make accessing the money in ATMs more difficult for criminals.

Now, if not enough explosives are used, the chances of gaining access to the money is low, but using too many explosives could destroy the money in the ATMs.

This was an “innovative way of overcoming that problem”, and allowed for greater access to the cash, Burger said.

“It’s not so important whether that [explosive] device was activated or armed. It was about the security official believing that it was armed at the time,” said Burger.

It was enough fear for the criminals to force the officials to work for them, he said. DM168