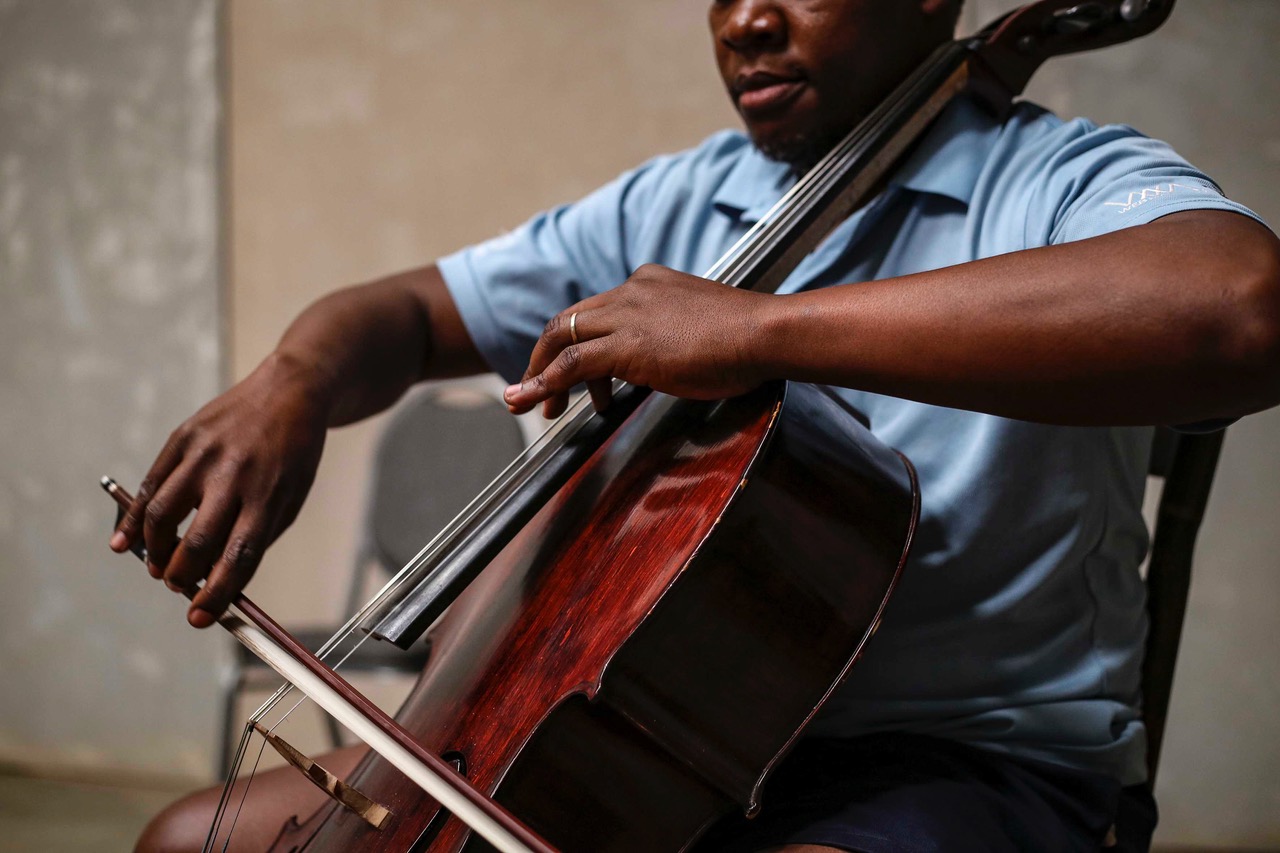 9 November 2020: Daliwonga Tshangela warming up on his cello during a recording session for Shane Cooper’s Happenstance. (Photographs by Zivanai Matangi/ Centre for the Less Good Idea)

Inspired by tape collage, the artist used a vintage reel-to-reel tape machine to explore the possibilities of sound in a collaboration that is as captivating as it is distinctive.

Musician and producer Shane Cooper possesses a shape-shifting sonic ability. A performer since the age of 16, the award-winning jazz bassist and composer’s work – including as part of his dual identity as electronic producer Card on Spokes – ranges across various albums and scores for film and theatre.

His latest work is an adventure in sound called Happenstance, four soundbooks, much of which was recorded on a vintage reel-to-reel tape machine. Released between November and December 2020, the work was commissioned by the Centre for the Less Good Idea, based in Johannesburg.

Early in 2020, Cooper inherited a vintage Nagra IV-S reel-to-reel magnetic tape machine from his father, who had it in his studio from work as a video producer. It dates back to the early 1970s, is robust and portable, and was used predominantly in field recordings, particularly for film.

The Happenstance project follows from an earlier solo work created during the initial Covid-19 lockdown and inspired by Egyptian composer Halim El-Dabh. Cooper first experimented with the machine to create a tape collage for the Africa Synthesized online conference in June last year. It was through his research for this tape collage that he first encountered El-Dabh, who is credited as the pioneer of tape collage and sometimes referred to as the “father of electronic music” as his work preceded French composer Pierre Schaeffer’s musique concrète (real music) by four years.

A tape collage is made using recordings of different sounds on tape and rearranging them to create a new whole, much like one does with images cut out to create new artworks. El-Dabh’s work is becoming more prominent after being overshadowed too long by dominant Western narratives in sound.

Inspiration in sound and story

“I was really inspired by his work and hearing about how he was truly one of the pioneers of working with tape collage,” says Cooper. “Also, learning that he came from Africa and that he is a pivotal figure in terms of history – it gave me a lot of inspiration, not only from his sound world but just from his story.”

Cooper’s project for the conference consists of a 12-minute tape collage, which is best heard through headphones or decent speakers. It was created using two and a half hours of material recorded to tape.

“Because it was hard lockdown, I couldn’t work with anyone in the room. I had the reel-to-reel tape machine and I had been wanting to work with it anyway. I decided to focus on creating a tape collage loosely inspired by Halim El-Dabh but with my own tastes and own sensibilities,” Cooper explains.

The musician played with the idea of speed and pitch. He referenced scenarios that a tape-collage artist would normally weave together, including street scenes, found material and original music. “I thought I would try to do that and split myself in two. So, I would be multiple performers.”

Cooper played different instruments, even some with which he didn’t have prior experience. “And I played them in a very loose and free way. I was doing each one individually so that I could try to pretend I was different people. And then I would also be the person with the tape machine capturing these people. So, it was a lockdown simulation of that world.”

For Happenstance, Cooper developed these ideas further. He was approached by the Centre for the Less Good Idea to create an audio work that could be freely available afterwards. “The idea was for it to be immersive and bring people into a very creative world that was just sonic,” he says.

As lockdown restrictions had been eased, he was able to connect with artists in Johannesburg to record them on the tape machine. “I went to the centre to explore all the various rooms and non-conventional spaces, like passageways, hallways, stairs and parking lots. I got a sense of what each could bring acoustically in terms of reverb, echo, ambience and in terms of imperfections.”

This includes having outdoor sounds enter the recordings, such as the sound of highways or vehicles outside. “I wanted to let these imperfections become textures, which is something you get in field recording work and stuff like musique concrète and tape collage. I also hear it in electronic music that I love, from artists like Burial.”

Cooper adds: “These kinds of textural lo-fi sounds add a humanness and a kind of tangible texture to sound that I love, and [it] is one of the things that feels good to me because it feels like it attaches to the real world.”

The miking techniques were used very deliberately for each instrument. “A microphone is really an instrument as well,” Cooper says. “You’re putting your listener’s ear in very specific areas to give them a different quality and perception each time. So, it’s like a camera lens. We don’t take it for granted where things are placed.”

The first three episodes were recorded in different rooms of the building and the fourth in Cape Town. The music was all improvised, built off a few directions and keywords. These recording sessions were later edited into episodes, which Cooper intends to be heard as standalone pieces.

Cooper advanced his work with the tape machine by creating tape loops, made during the post-production process. “What these tape loops are to me is creating little micro universes, because I’m cutting up millisecond moments and splicing them together, not knowing what it would sound like until I listened back.

“The first time I played it back would be a complete surprise about what would come out. It became a huge part of the production process. These moments are micro universes of sound. The more you listen to a tape loop, you zoom out sonically and emotionally.”

Static is the first piece Cooper made and references the original idea for the project. “It came out of the feeling of lockdown and also refers to the static electricity felt in Joburg, so these bursts of energy that you get from small amounts of friction.”

Episode two, Skins, captures recorded sound either created by an instrument that has skins (like real or synthetic drums), or played by the skin directly on the strings (such as a double bass). Joining him for this session was Gontse Makhene on percussion, Micca Manganye on percussion and Jonno Sweetman on drums and percussion.

“A lot of the sound that I get on the double bass is dependent on how hard my fingers are or which part of the skin on my fingers I use. And when you listen to a solo recording of double bass, you can hear someone’s skin scrape over the string and then pluck the string. You’re actually hearing the fingerprints and texture of skin first. And that’s really incredible to me. A lot of my consideration as a bass player is the hardness of the skin on my fingers and my hands and how I maintain that,” says Cooper.

Episode three is Tongues, in which every sound is a manipulation created by the human voice. There are points where the voice sounds like a drum or synthesiser. The session includes vocals by Zoë Modiga, Sakhile Moleshe and Ann Masina. “That episode is quite surrealist. It’s inspired by the work of David Lynch and Haruki Murakami. It’s supposed to feel like an immersive dream and supposed to be quite bizarre.

“That limitation of just working with vocals allowed me to really break out of a comfort zone and turn over new stones to see what I could uncover. With every project I do, as hard as it is sometimes, I try to put myself outside of my comfort zone, so that I’ll generate new ideas that I would have never come up with if I was just trying to do the same thing again. It’s something of a personal journey for growth. Sometimes it yields results that I will go on to use elsewhere, whether it’s technique or an idea or an approach.”

The final episode, Ecotones, diverts from the previous ones in that it is a collaboration with ecological artist Zayaan Khan and was recorded in Cape Town. It is a vivid soundbook that explores different outdoor environments and plays with the process of fermentation, which Cooper says “sounds like static from the radio”.

Cooper followed Khan around for a few days with a portable recorder and a top-quality microphone, harvesting plants from ocean to inland. He recorded footsteps, the fizz from fermentation jars, the texture of leaves, the sounds of kelp being harvested and kumquats being chewed, as well as poetry being recited. The pair even experimented with microphones inserted in water.

“We did all kinds of fun and experimental things to make her world even more enhanced sonically,” says Cooper. Later, they created the narrative and sound design for the piece. “I think of that episode as the opposite of a silent film; it’s an invisible film.”

The emphasis of the whole project is on listening and, like his Africa Synthesized tape collage, the pieces were designed to be heard through headphones. Each episode is roughly 20 minutes long with a thread that links them conceptually.

Experimenting with the limitations of this analogue recording process led to a heightened sense of awareness and focus for Cooper. “No one had headphones. They were listening to each other in the room. It meant that the empathy was high. The chemistry was high. And people were really focused and present,” he says.

“I used the analogue part of this process to create an environment that everyone felt very present in the moment. This is very important for me because we came out of such an intense lockdown where no interaction was allowed in person. I wanted to lean into it more than I ever have.” DM/ ML

Happenstance is free and available for listening on Youtube, Spotify or Apple Music.