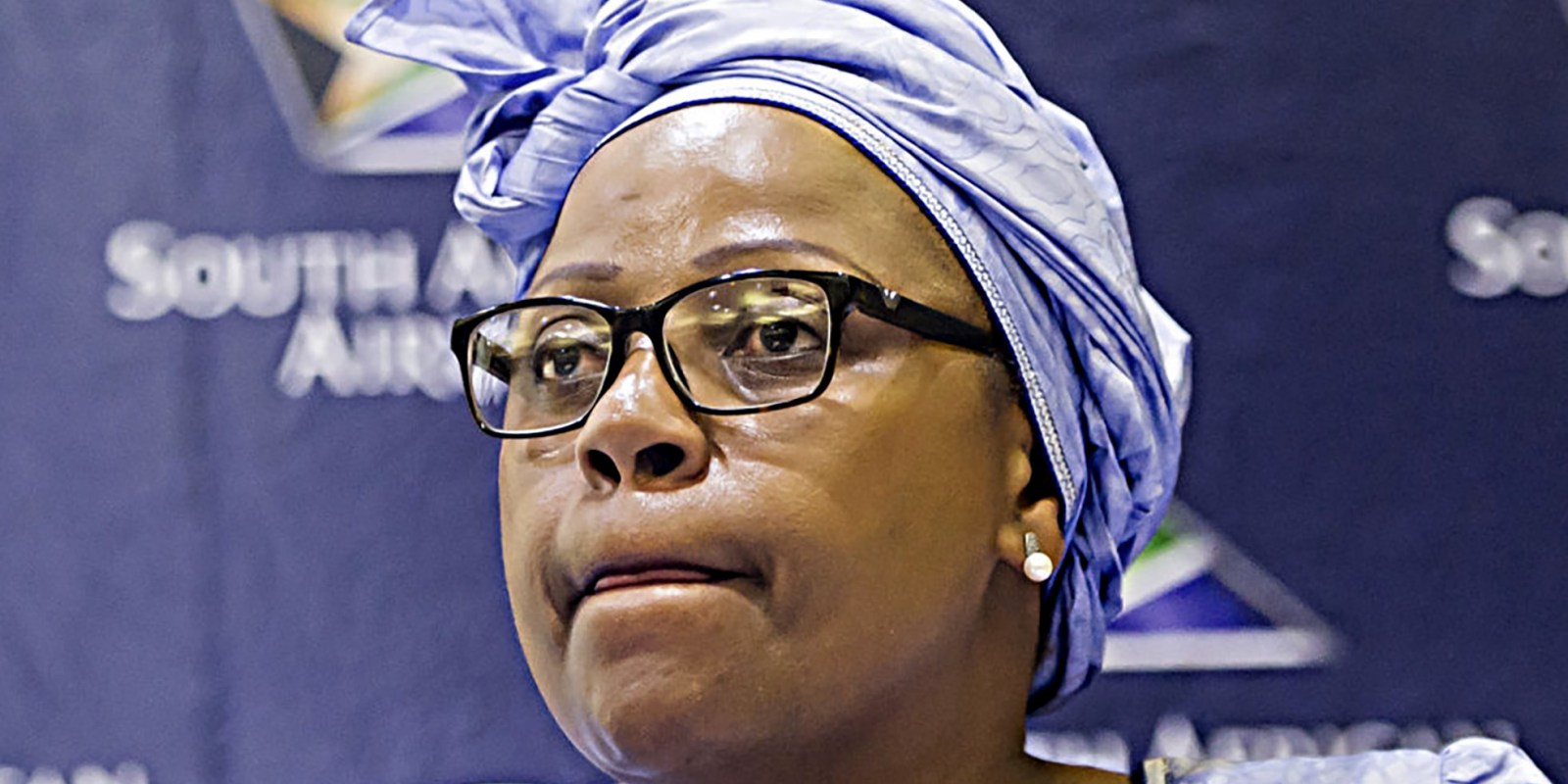 Former SAA chairperson Dudu Myeni has launched two court appeals to try to remove the delinquent director for life declaration issued against her, while arguing no evidence existed that she destroyed the state airline.

Dudu Myeni has launched an appeal with the Supreme Court of Appeal (SCA) against the ruling  issued by Judge Ronel Tolmay on 27 May last year that declared her a delinquent director for life.

She has also appealed to the North Gauteng High Court against an order issued by Tolmay on 22 December last year that Myeni relinquish all her remaining directorships while she appealed to the SCA over the delinquent director declaration.

This December ruling overturned the practice of a judgment remaining suspended pending the outcome of an appeal process.

In a “notice of an extreme urgent appeal”, filed on 21 January, Myeni based her appeal to the North Gauteng High Court against the enforcement order on four grounds:

Advocate Dali Mpofu, on behalf of Myeni,  told a full bench of the North Gauteng High Court on Monday that the court should halt the enforcement order while Myeni appealed to the SCA against the main ruling.

He argued that in terms of the Supreme Courts Act, the enforcement order should be automatically suspended pending the outcome of Myeni’s SCA appeal, he added.

The judges who heard the appeal on Monday were Judge President Dunston Mlambo, Justice Vuyelwa Tlhapi and Justice Annelie Basson.

No evidence of SAA’s destruction

In the ruling issued in May last year, Tolmay found Myeni to be dishonest, grossly abused her power, was grossly negligent, reckless, and that her actions inflicted substantial harm on SAA.

In contrast, Mpofu on Monday argued that there was no evidence to conclude that Myeni destroyed SAA.

“Our submission is not so much that the [delinquent director declaration] findings were wrong… Our attack is that they are unsubstantiated.

“If you say that [Myeni] destroyed SAA… there is no evidence in this case that supports that conclusion,” he added.

He disagreed with the argument that Myeni’s actions had “almost toppled SAA and could have toppled the economy”.

“You can’t base [the argument] around what almost happened or what could have happened. It has to be facts-based,” he added.

In their heads of argument, Outa and Saapa state that her appeal of the enforcement order made to the North Gauteng High Court must fail.

They added that Myeni faces no irreparable harm if the court enforces the order, and there was no prospect of success for any of her appeals.

Advocate Carol Steinberg, on behalf of Outa and Saapa, said on Monday in the North Gauteng High Court that Myeni’s right to petition the SCA to appeal against the main ruling made in May last had lapsed as she had submitted her SCA petition late.

On 3 February, Myeni petitioned the SCA to dismiss the delinquent director for life declaration. But Myeni filed the SCA petition seven days late.

Mpofu said the right to appeal never lapsed. “It is there forever… amen.”

Myeni’s attorney, Thomas Sibuyi, wrote that the delay in submitting the SCA appeal was “not inordinate in the circumstances”.

“I pray for the condonation for the late filing of the applicant’s petition application,” he added.

Sibuyi said the SCA appeal was of “extreme importance” to Myeni.

“The sanction of a lifetime ban imposed by a court is unprecedented in South Africa and unwarranted in the circumstances,” Sibuyi added.

“The prejudice to [Myeni] will be manifest and disproportionate,” Sibuyi said.

‘Prospects gone from bad to worse’

Outa and Saapa said they would oppose Myeni’s SCA appeal.

Executive director of Outa’s accountability unit, Stefanie Fick, said in a statement that Myeni’s prospects of succeeding in her SCA appeal had gone “from bad to worse”.

The SCA sets a high bar for condonation of any late applications, so Myeni’s prospects were “slim to none”, Outa and Saapa wrote in their heads of argument.

Myeni failed to file her SCA petition timeously, yet she insisted that the North Gauteng High Court should convene urgently, put aside all other cases, and hear and decide her appeal.

Rulings against Myeni now in force?

Steinberg said that were the ruling to be suspended, the public faced an “enormous risk” that Myeni could be appointed to the board of SAA or Eskom or any other number of boards.

However, Mpofu made light of Steinberg’s claim and said that if Myeni was appointed to the Eskom board, then Outa and Saapa could look to interdict such an appointment.

“This court cannot preempt everything that might happen and seek to prevent it by a draconian measure. You can’t have an interdict through the back door that she can’t be appointed to Eskom,” he added.

Mpofu and Steinberg both agreed with Mlambo that the existence of “exceptional circumstances” was the vital test when considering whether the enforcement order should stand.

Saapa and Outa said Tolmay agreed that five factors rendered the case exceptional and showed irreparable harm to the public if the court failed to enforce the order.

These five factors were:

The court could not fault Tolmay for finding that Myeni would not suffer “irreparable harm” if the court enforced the order, Outa and Saapa said.

Steinberg argued that “irreparable harm” did not relate to a loss of income.

Myeni remains a director of a number of entities, including holding the position of chairperson of the Jacob G Zuma Foundation.

In her notice of appeal, Myeni announced that her term as deputy chairperson of the state-owned Free State electricity distribution company Centlec ended in November last year.

Centlec distributes electricity in the area under the jurisdiction of the Mangaung, Kopanong, Matsopa and Mohokare municipalities and has around 177,000 customers.

Mangaung metro spokesperson Qondile Khedama told Daily Maverick that Myeni was no longer on the Centlec board as the company had put in place a new board of directors from 1 November 2020.

At the close of proceedings on Monday, Judge Mlambo reserved judgment. DM