Is the president doing a ‘very good job’ or a ‘very bad job’? Political partisanship notwithstanding, these questions are crucial to whether South Africans obey the regulations to curb the virus, a survey suggests.

The findings of three rounds of the University of Johannesburg/Human Sciences Research Council Covid-19 democracy survey, which ran between April 2020 and January 2021, suggest that our willingness to comply with regulations to counter the spread of the coronavirus is linked to the extent to which we think the president is doing a “good job” in handling the pandemic.

It is noteworthy that by early January, approval of President Cyril Ramaphosa’s performance had increased again. Four out of five (80%) adults in South Africa think he is doing a “very good job” or a “good job”. This is only slightly lower than his highest rating a few weeks into the initial lockdown in April 2020, when 85% of adults approved of his performance. By Round Two of the survey, from July to September 2020, it had dropped to 65%.

The ratings are closely linked to political partisanship. Nevertheless, the proportion of those who said he is doing a “very good job” or a “good job” have increased since August among supporters of all three main political parties. Unsurprisingly, approval is highest among those who said they would vote for the ANC “if a national election were to be held tomorrow”, growing from 85% (“very good job” or “good job”) in August 2020 to 92% in January 2021. The same trend occurred, but to a lesser extent, among DA supporters – 38% to 61%. The proportion of EFF supporters who approve of the president’s performance rose from 60% to 73%. The political party question was not asked in Round One (April/May 2020). 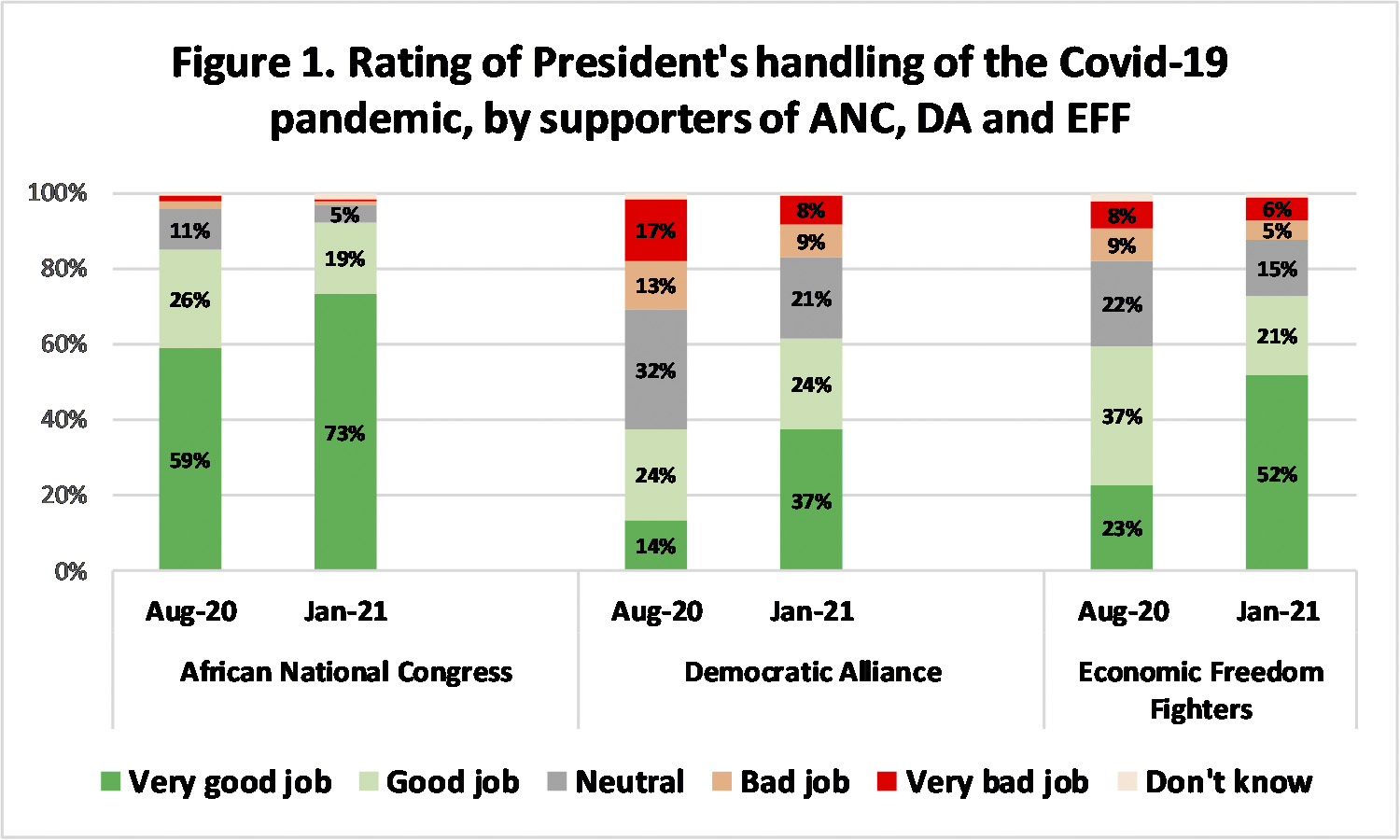 Among the messages to the president collected in the survey were numerous accolades:

“Keep on doing the phenomenal job you are doing. Despite the growing weariness of the public in the face of months of strain and stress, and despite growing voices of dissent, you continue to lead with integrity, good counsel and humility. I am ever appreciative of all the sacrifices you are making to steer the country during these extremely difficult times. Thuma Mina.” (White man, KwaZulu-Natal, 45-54 years)

Conversely, among the small proportion who said the president is doing a “very bad job”, the messages were highly critical:

“Stop lockdowns completely, not even level 1, open up the economy completely, let kids go back to school, let people build their immune system, no masks, no social distancing, stop the corruption, covidprenership is bad, stop all the testing, no vaccine, there is no medical crisis, stop creating fear among the people.” (Black African man, Gauteng, 45-54 years)

The survey findings show that the extent to which people comply with government regulations about wearing a mask are also linked to their rating of the president’s management of the situation. If an individual thinks he is doing a “bad” or a “very bad job” there is a stronger probability that she/he does not wear a mask whenever leaving home. Almost three-quarters (73%) of those who say the president is doing a “very good job” also say they always wear a mask when leaving home. One respondent who felt he is doing a “very good job”, said:

Disapproval of his performance seems to correlate with much lower adherence to the legal obligation to wear a mask in a public place. Only 54% of those who say he is doing a “very bad job” always wear a mask when leaving home. 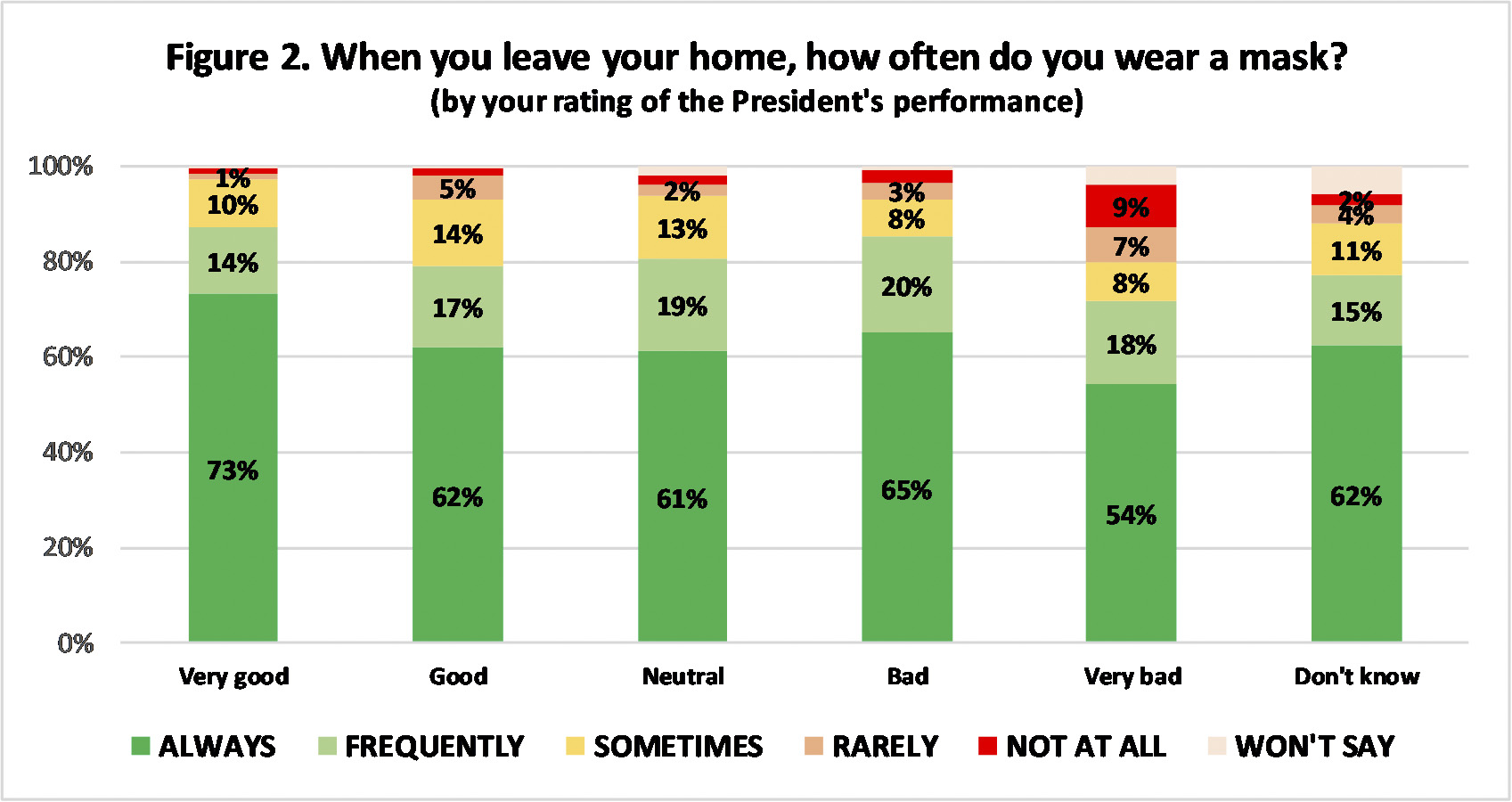 Differences of opinion about temporarily surrendering some human rights in the interests of fighting the pandemic also emerged.

Respondents were asked whether they would be willing to sacrifice some of their human rights if it helped to prevent the spread of Covid-19. The vast majority (85%) of those who say the president was doing a “very good job” are willing to do so. In stark contrast, only about one-third (37%) of those who say he is doing a “very bad job” are prepared to do the same, while 42% of this group are not willing to let go of their human rights. 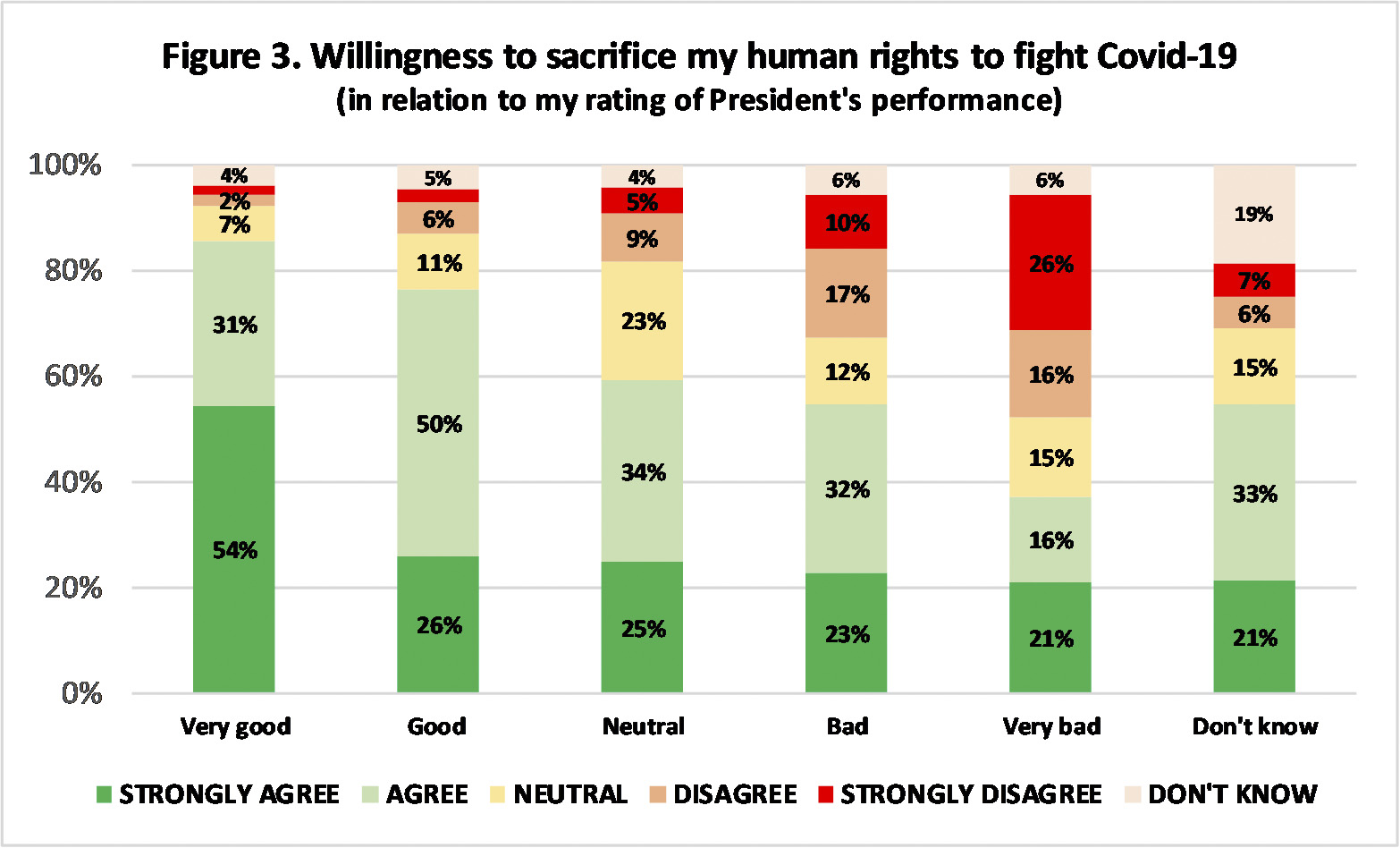 Such divergences of opinion also emerged in respect of Covid-19 vaccines. In Round 3 respondents were asked whether they would receive a vaccine if it became available. Three-quarters (75%) of those who say Ramaphosa is doing a “very good job” say they would definitely get it. This is slightly lower (68%) among those who say he is doing a “good job”. One respondent who approved of his performance said:

“Mr President I think you really doing a good job with the lockdown, and I hope you extend it until the vaccine is found.” (Black African man, Limpopo, 25-34 years) 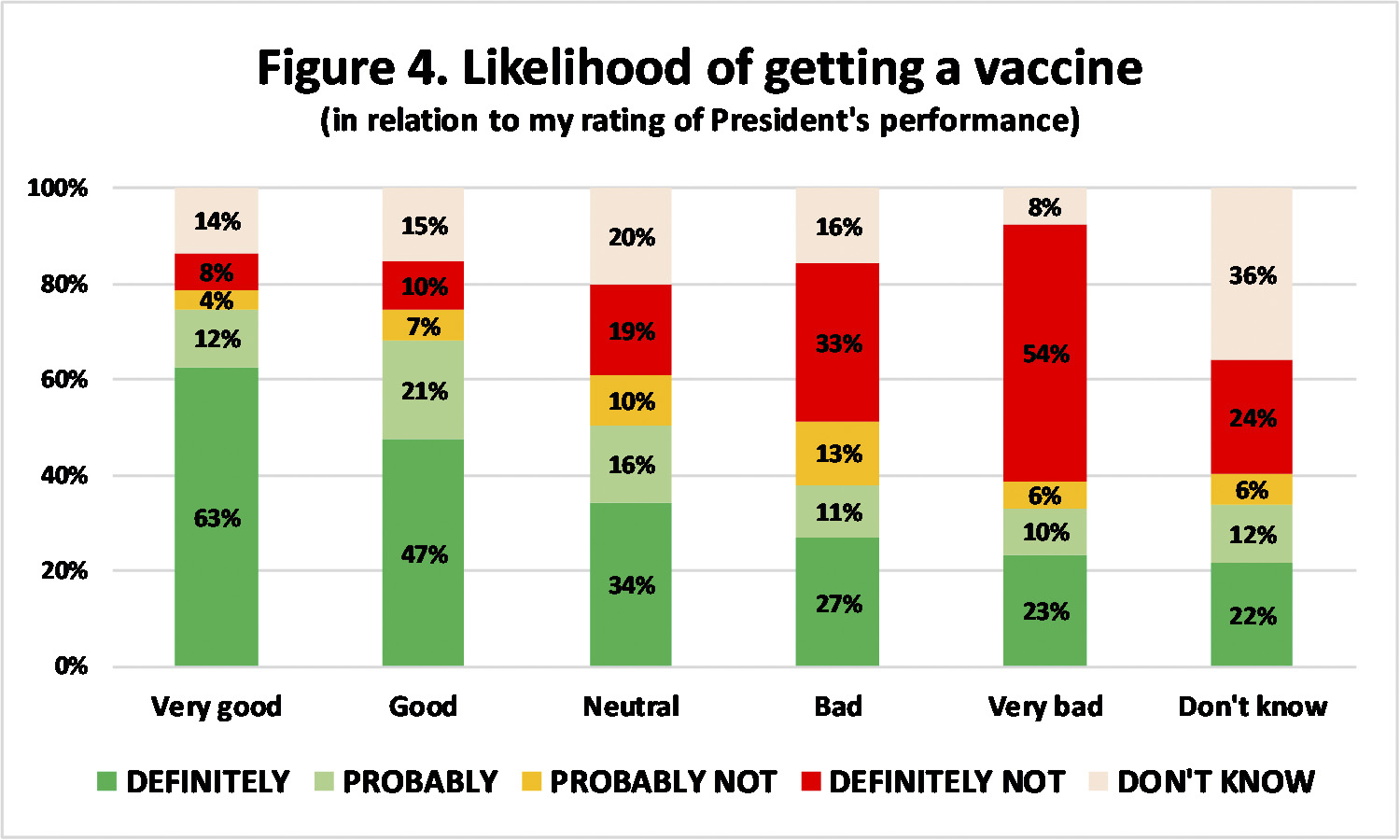 To defeat the coronavirus, Ramaphosa has a huge responsibility to win the confidence and approval of South Africans. To his credit, four out of five in the adult population think he is doing a “very good” or a “good” job. This sentiment is common among females and males across all age groups, income levels and provinces. However, a cause for contemplation and some concern is that approval of the president is significantly lower among the country’s wealthiest individuals – those who earn more than R20,000 per month (50%) – as well as the white population (47%) in general and among those with the highest level of education – a post-matric qualification (65%).

After almost a year under lockdown, signs of a class divide are becoming more visible. Those who earn more and are well educated are more critical of Ramaphosa, while the less fortunate are placing their trust in him to manage the pandemic in all its complex facets. The big question is how long he will be able to defend the failures of government, such as lack of personal protective equipment, high levels of corruption and confusion about the delivery of vaccines, before trust is eroded and compliance fatigue increases as we move into the third wave of Covid-19 this winter.

The survey data were collected in an online, multilingual survey. All willing respondents in South Africa aged 18 or older, who had access to the #datafree Moya messenger app on the #datafree biNu platform, or other social media, were able to take part. A total of 30,896 completed individual responses were received. The findings are weighted by age, population group and education, making them broadly representative of the population. DM/MC