Soldiers for rent in the Boko Haram crisis 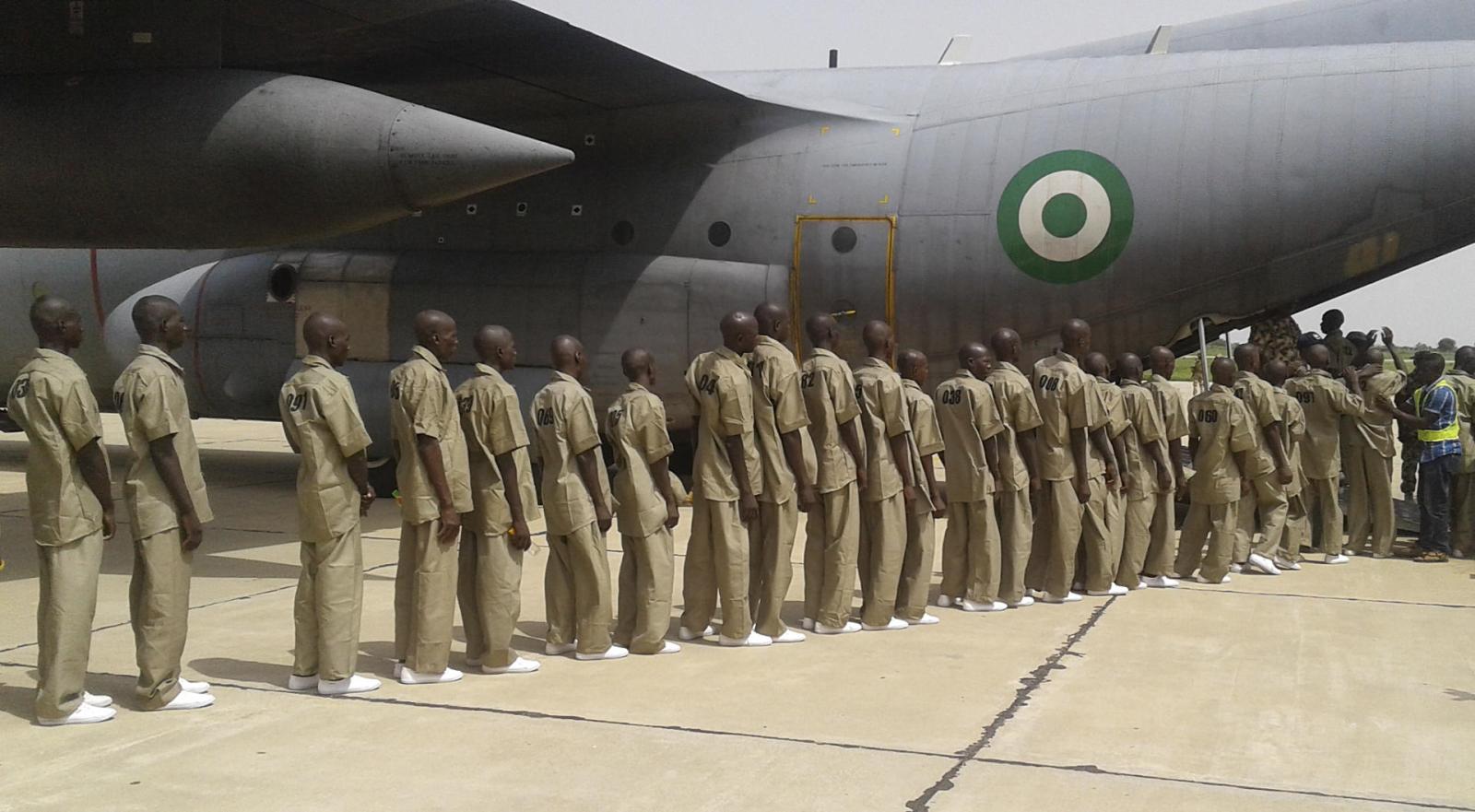 Surrendered Boko Haram Islamic militants are loaded onto an aircraft by the Nigerian military to be taken to a rehabilitation centre in Gombe where they reportedly are to begin a de-radicalisation process, in Maiduguri, Nigeria, 08 July 2017 (EPA/Usuf Osman)

A Nigerian governor’s call for mercenaries to support the counter-insurgency revives questions about a controversial practice.

Following Boko Haram’s brutal attack on dozens of farmers in Nigeria’s Borno State last November, the state governor called on federal authorities to enlist mercenaries to counter the terror group’s activities in the Lake Chad Basin. This reflected popular wariness about the ability of countries in the region to defeat the insurgents alone.

Using mercenaries against Boko Haram isn’t a new idea in the region, but it raises tricky questions. Cameroon’s infamous Rapid Intervention Battalion, trained by Israeli mercenaries under Eran Moas, has been involved in fighting the extremists. It’s uncertain whether Chad and Niger have engaged the services of mercenaries but their citizens appear to be working as guns for hire in other countries.

In December 2014, Nigeria’s government recruited South African mercenaries to stop Boko Haram attacks on its north-eastern cities before the 2015 elections. A report at the time by the International Centre for Investigative Reporting (ICIR) mentions at least three private military companies’ involvement. These are Conella Services, Pilgrims Africa, and Specialised Tasks, Training, Equipment and Protection International (STTEP).

The position of Nigeria’s current administration on mercenaries is clear. President Muhammadu Buhari condemned the move even before assuming office. Using private contractors to deliver military services goes against the African Union’s Convention for the Elimination of Mercenarism in Africa, which Nigeria ratified in 1986. It’s also contrary to the United Nations’ International Convention Against the Recruitment, Use, Financing and Training of Mercenaries, which the country signed in 1990 but never ratified.

In a recent interview with Arise News, a Conella Services representative confirmed that they were contracted by Nigeria’s Office of the National Security Adviser to carry out training and combat operations against Boko Haram. He said his company sought to fill counter-insurgency knowledge and experience gaps in the Nigerian military. This included, for example, how to fly a plane at high speeds and low altitudes in the dark.

According to ICIR’s investigation, in 2015 about 147 South African mercenaries and 163 specially trained Nigerian soldiers formed the 72 Mobile Strike Force special unit. This unit reportedly recovered control of major territories in the first few months of 2015, making some remarkable gains against Boko Haram. Eeben Barlow, famous mercenary and STTEP representative, detailed the “relentless pursuit” approach that was supposedly key to overpowering the insurgents.

While issues of non-payment apparently forced the private military companies to leave by April 2015, this intervention is believed to have marked a turning point in Nigeria’s fight against Boko Haram. One could arguably conclude that mercenaries should be invited back to support Nigeria’s counter-insurgency. However, other intervention scenarios provide a more nuanced understanding.

During Nigeria’s Civil War from 1967 to 1970, using mercenaries was common practice by both the Biafran secessionists and the Nigerian military. Some scholars suggest that these mercenaries contributed to prolonging the war.

Trying to avoid killing their counterparts, mercenaries on the Nigerian side deliberately spared the Uli Airstrip, which had become a lifeline for the Biafran side. Also, forcing the closure of the airstrip would have been key to ending the war – and their contracts. Interpersonal relationships and personal enrichment, therefore, took priority in their war efforts.

The profit-driven motivations of mercenaries and the companies hiring them should never be underestimated, and their private contractor status also makes it difficult to hold them accountable. There are allegations that mercenaries have also been recruited by Boko Haram.

Mercenaries have a rich and chequered history in Africa including in countries like Angola, the Democratic Republic of the Congo, Liberia, Libya and Sierra Leone. Experience has repeatedly shown the dangers of resorting to these fighters. Still, they have enduring appeal to some African governments, most recently in Mozambique.

The argument that mercenaries allow states to use foreign expertise without foreign influence doesn’t hold. It’s common for governments to endorse their nationals’ involvement as soldiers for rent in overseas conflicts as a way to expand influence without accountability.

It is important to note that in 2015 South Africa’s government publicly expressed disapproval that its citizens were providing mercenary services in the Boko Haram conflict. It is illegal for South Africans to participate in mercenary activities in other countries.

Using hired guns can also undermine morale in national armies. Mercenaries are usually paid much more than local soldiers which can contribute to resentment. The elevated status granted to these external fighters can be seen as undermining local efforts. Involving mercenaries can also introduce a global dimension to local conflicts, where using mercenaries of one nationality prompts the involvement of rival nations.

Whether mercenaries should again be recruited in the war against Boko Haram remains a valid question. Victory in the war against extremism in the Lake Chad Basin has been slow to materialise and attacks are recorded weekly. South African mercenaries appear eager to return to the region, with the Conella representative saying, “We would like to come back and finish the work that we started in Nigeria.”

Some analysts believe mercenaries will keep their strategic relevance for counter-insurgency in contexts like the Boko Haram crisis because of their agility, knowledge and expertise. However there are concerns over accountability, as well as the short- and long-term distorting effects they may have on a region’s defence architecture. They are also expensive – local defence forces could use these resources more sustainably.

Instead of reverting to using mercenaries, countries in the Lake Chad Basin region should intensify efforts to build the capacity of their national forces and strengthen regional cooperation.

Since 2015, the Multinational Joint Task Force created by states in the region to combat Boko Haram has recorded meaningful gains that could be improved on. With training support from legitimate foreign armies, this is a more viable approach to the region’s security needs. It should also form part of a comprehensive counter-insurgency strategy that goes beyond military might. DM

This article is made possible through funding from the United Nations Development Programme, the UK’s Conflict, Stability and Security Fund, and the government of the Netherlands.