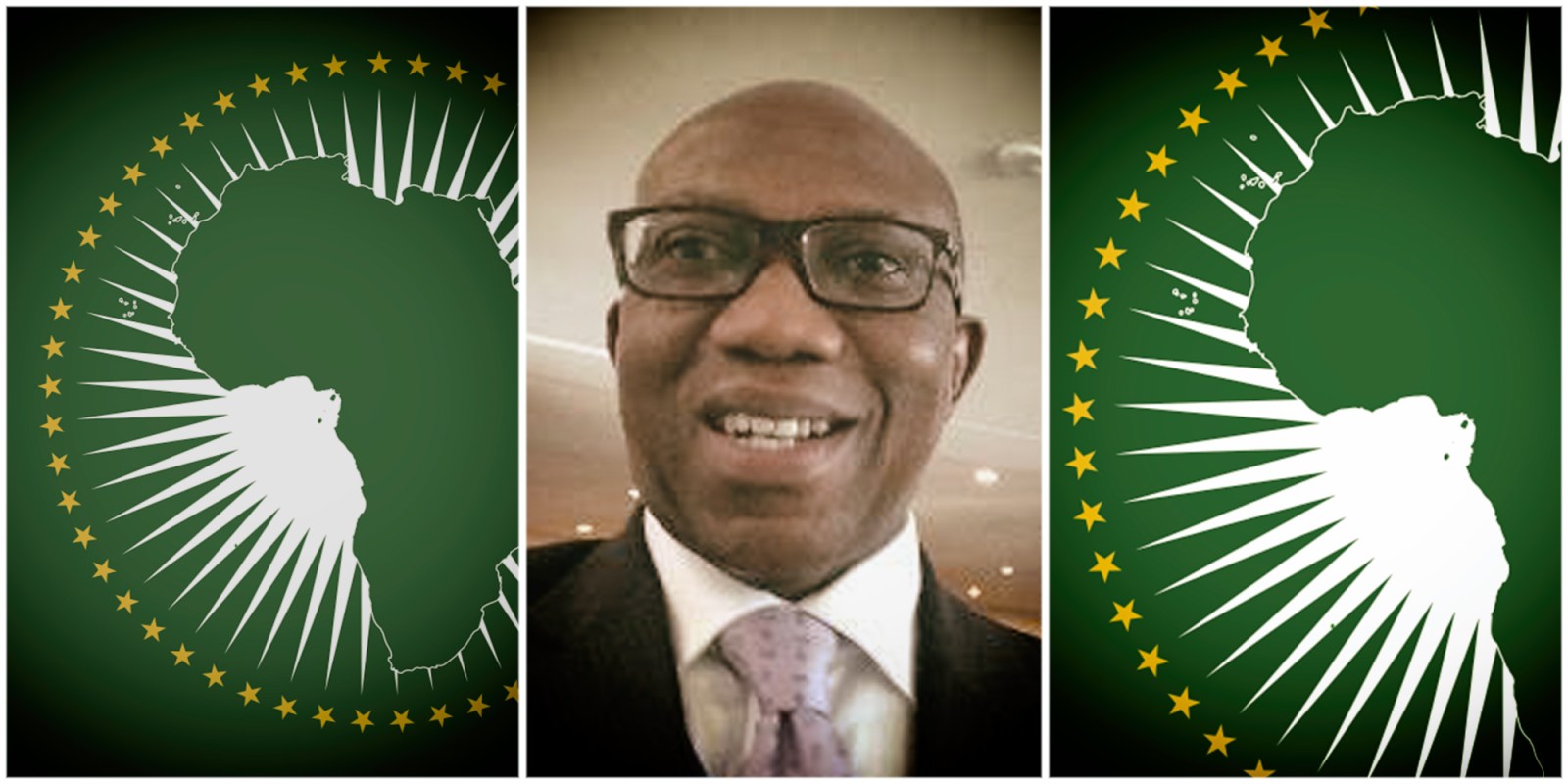 Bankole Adeoye, the new African Union Commissioner for Political Affairs, Peace and Security, has made inclusive and smart partnerships one of his strategic priorities, according to the author. (Photo: Twitter | African Union logo / Wikimedia)

The powerful commission for political affairs, peace and security went instead to Nigeria.

South Africa lost all its bids for positions on the African Union Commission this weekend, in what some are calling a failure of foreign policy.

South Africa and southern Africa failed to strategise ahead of the AU summit on Saturday and as a result lost any chance of securing the powerful position of commissioner for political affairs, peace and security.

The job went to Nigerian diplomat Bankole Adeoye. South Africa’s Jeremiah (Kingsley) Mamabolo, a seasoned diplomat who has been South Africa’s ambassador to the AU, UN, Nigeria and Zimbabwe — as well as heading the joint African Union-United Nations Hybrid Mission in Darfur — had been shortlisted for the post.

But he didn’t stand a chance because of the AU’s regional politics and voting system. The southern African region reached its quota of two commissioners even before the heads of state and government came to vote for the political affairs, peace and security portfolio.

The two other southern Africans who were re-elected to their posts were Angola’s Josefa Sacko, as commissioner for agriculture, rural development, blue economy and sustainable environment and Zambia’s Albert Muchanga as commissioner of economic development, trade and industry and mining.

Meanwhile, Egypt’s Amani Abou-Zeid was also re-elected as commissioner for infrastructure and energy.

Elections for the commissioners of health, humanitarian affairs and social development; and of education, science, technology and innovation were postponed to the next meeting of the AU Executive Council of ministers.

South Africa also has a top candidate theoretically competing to head the commission for education, science, technology and innovation. Former director of the National Research Foundation Molapo Qhobela ranked highest among the list of candidates for this post, with a 91.45% score from the panel of experts who shortlisted the candidates. But his candidacy now also seems to have still-born by the re-elections of the Angolan Sacko and the Zambian Muchanga.

AU Commission chairperson Moussa Faki Mahamat of Chad was re-elected unopposed, while Rwanda’s  Monique Nsanzabaganwa was elected by the heads of state and government as the first woman deputy chairperson of the African Union Commission.

She said there had been a lack of coordination within the South African government and among governments of the southern African region.

She recalled that at one point South Africa even had two candidates competing for the same position, as deputy chairperson, before Pretoria eventually decided to withdraw both from the contest to focus on Mamabolo and Qhobela.

But Louw-Vaudran said the southern African region — largely represented by the Southern African Development Community (SADC) — had also failed to strategise, to prioritise and to coordinate its positions.

She contrasted this incoherence with the Economic Community of West African States (Ecowas) which had strategised by agreeing that Ghana should withdraw its candidate for the deputy chairperson position, to avoid spoiling Adeoye’s chances of election as commissioner for politics, peace and security.

“Ecowas was better organised and understood that for any region, Politics Affairs, Peace and Security is absolutely critical,” a South African diplomat said.

“It is not about individuals. It is about what is strategically important for a country and region,” he added.

However, Louw-Vaudran conceded that it might have been difficult for SADC to persuade either Sacko or Muchanga to stand down in favour of either of the South African candidates, as both were already incumbents in their posts.

This would allow the new commissioner to also address the political root causes of violence such as stolen elections — which are often the spark that ignites violence.

However, some analysts believe that, far from merging the two portfolios to emphasise the importance of politics, the heads of state did so to “swallow” political affairs into the bigger commission so they could silence political affairs.

President Ramaphosa handed over the rotating chair of the AU to President Felix Tshisekedi of Democratic Republic of Congo (DRC) at the summit. Tshisekedi, Faki and some officials were together in the Mandela Hall at AU headquarters in Addis Ababa, Ethiopia for the summit, but Ramaphosa and most other leaders participated online.

Tshisekedi praised Ramaphosa for his leadership of the AU in the handling of the Covid-19 pandemic and announced that he had appointed him as champion of the AU’s Covid-19 vaccine strategy, including acquisition of the vaccine by AU member states.

Tshisekedi said as chairperson he would focus on strengthening peace and security; pursuing the operationalisation of the African Continental Free Trade Area (which officially started trading on 1 January); promoting a renaissance of African culture, arts and heritage; combating climate change; accelerating integrative projects, including the construction of DRC’s Inga hydroelectric dam; and consolidating the AU’s fight against Covid-19. DM