AU made progress with Ramaphosa in the chair, but conflicts bubble on 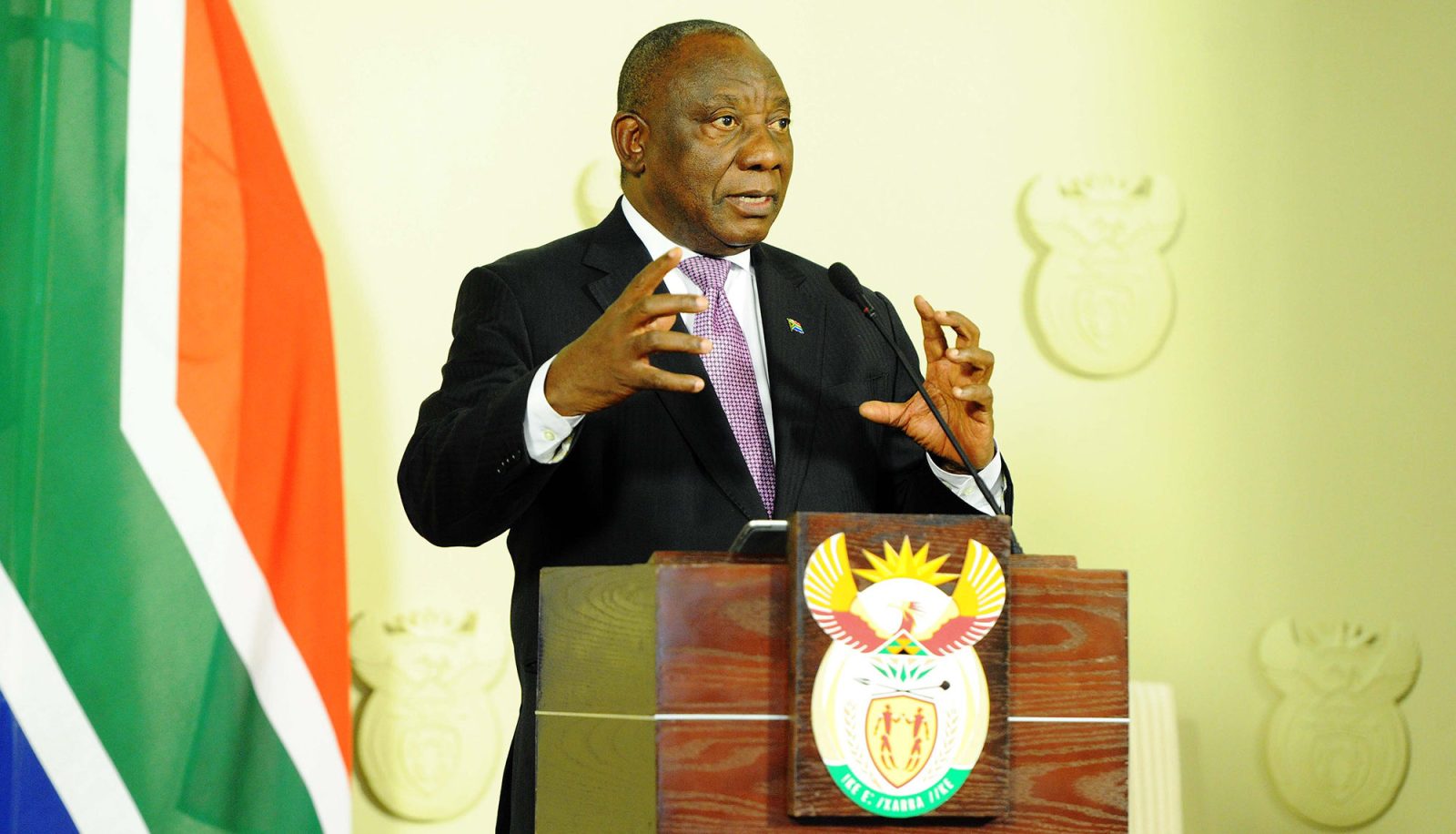 African Union 2020 chairman President Ramaphosa focused on two major initiatives: the African Continental Free Trade Area and Silencing the Guns by 2020, an AU initiative launched in 2013 to eliminate conflict on the continent by the end of 2020. (Photo: Siyabulela Duda)

Covid-19 threw several large spanners into the SA president’s plans as African Union chair in 2020. But he did a pretty good job of leading the continent’s fight against the pandemic.

When President Cyril Ramaphosa stood up in the Nelson Mandela Hall on 9 February 2020 to accept the chair of the African Union (AU) for 2020, Covid-19 was just sniffing at the door.

China had just announced that it had detected human-to-human transmission of the coronavirus at “ground zero” – Wuhan. So the AU Commission, guided by its capable Africa Centres for Disease Control and Prevention (CDC), had put up remote thermometers and provided sanitisers at the entrance to the AU building in Addis Ababa. But few, if any, suspected what was to come. Certainly, in his acceptance speech outlining his priorities for his year as chairperson, Ramaphosa made no mention of Covid-19.

He focused on two major initiatives: the African Continental Free Trade Area (AfCFTA) – “the greatest step towards continental unity since the founding of the Organisation of African Unity (OAU)” he called it – and Silencing the Guns by 2020, the AU’s initiative, launched in 2013, to eliminate conflict on the continent by the end of 2020.

Ramaphosa offered to host two extraordinary AU summits on each of these two initiatives in South Africa in May. By the AfCFTA summit, African nations would have completed negotiations to enable tariff and quota-free trade to begin on 1 July, in the largest free trade area in the world, measured by numbers of member countries – 55.

The AfCFTA would “reignite industrialisation and pave the way for Africa’s integration into the global economy as a player of considerable scale”, he said expansively.

On Silencing the Guns, Ramaphosa promised increased AU attention to resolving the many conflicts on the continent, seeking “African solutions for African problems” – particularly for the perennial warfare in Libya and South Sudan.

He also committed to seriously address gender-based violence, and to increase representation of women in decision-making institutions of African economies and governments, as well as tackling governance deficits and boosting Africa’s role on the world stage. Et cetera.

“Our people await the harvest of our work,” Ramaphosa concluded, rather portentously. What Africa, like the rest of the world, reaped instead was the plague. Covid-19 struck with full force days later. Ramaphosa had to toss out almost all of his 2020 agenda to focus on the pandemic.

So the real achievements that he reviewed on Saturday, as he handed over the baton to President Félix Tshisekedi of the Democratic Republic of Congo, looked very different from the goals he set a year ago.

Yet, by most accounts, Ramaphosa – and  AU Commission chairperson Moussa Faki Mahamat – did a pretty good job of leading the AU in its response to the health and economic devastations of Covid-19.

South Africa’s deputy ambassador to the AU, Nolufefe Dwabayo, recalled at an Institute for Security Studies (ISS) webinar last week that their response had included: establishing a Covid-19 Response Fund, which had raised more than $57-million to help poorer countries; creating an online platform to help African nations pool resources and so better gain access to anti-Covid-19 medical supplies; and setting up the African Vaccine Acquisition Task Team, which had acquired a provisional 270 million vaccine doses for African countries by mid-January. The Africa CDC is seeking a total of about 1.5 billion doses to vaccinate 60% of Africa’s population to achieve herd immunity.

Using South Africa’s membership of the G20, Ramaphosa helped to steer through the Debt Service Suspension Initiative whereby the debt service payments of poorer countries, including many in Africa, were suspended until the end of June this year to enable them to spend that money on fighting Covid-19. This could be extended to the end of 2021.

Nonetheless, International Relations and Cooperation Minister Naledi Pandor told the AU executive council (of ministers) at its pre-summit meeting on Wednesday last week that Africa was still struggling to get its share of Covid-19 vaccines because rich countries had bought so many.

In response, she noted that SA and India had called on the World Trade Organisation to temporarily waive patents on some Covid-19-related medicines so these could be produced more affordably by developing countries. The WTO was expected to rule on that this week.

Elizabeth Sidiropoulos, national director of the South African Institute of International Affairs, noted at the webinar that Ramaphosa and the AU “did rather well. I think better than many other parts of the world” in fighting Covid-19, including mobilising the world to help Africa.

Though “Covid threw not one but several spanners in the works” of Ramaphosa’s plans, he and the AU had also done well to hold the postponed summits, on the AfCFTA and Silencing the Guns, in December, and to officially begin trading under the AfCFTA only six months late, on 1 January 2021.

Launching the AfCFTA was key to helping Africa to overcome the vulnerability of global value chains and to boost Africa’s limited capacity to manufacture medical equipment, which had been exposed by the pandemic.

On the Silencing the Guns initiative, ISS regional director in Addis Ababa Roba Sharamo noted at the webinar that conflicts were actually increasing on the continent, citing the insurgency in northern Mozambique. Another major conflict that erupted in 2020 was the civil war in Ethiopia’s Tigray state.

Sidiropoulos said if Africa were to meet even the extended deadline of 2030 for Silencing the Guns, it would have to focus much more on addressing political crises that erupted because of poor governance, or because of governments limiting the political space and clamping down on the opposition.

She criticised AU chairpersons – including, by implication, Ramaphosa – for being too cautious in calling out countries for these violations of human rights, democracy and good governance.

Sharamo said that the merger of the AU’s political affairs commission and its peace and security commission should help the organisation to address the political causes of conflict more successfully.

One should add that, although Covid-19 diverted Ramaphosa and the AU from their original agenda, the pandemic cannot be blamed entirely. In Libya, for example, which Ramaphosa had singled out, the AU did nothing visible in 2020 to end the conflict. But others did. The German government called a conference and the acting UN special envoy to Libya, Stephanie Williams, led mediation efforts that culminated in a ceasefire agreement in October last year, then a broadly inclusive political dialogue in November that agreed on transitional arrangements towards elections in December. The ceasefire, touch wood, is still holding at the time of going to press. DM168